Sunday August 12, 2019 – It feels like going back to school fishing on the lake today. I haven’t fished the Lake in over a month and I had to relearn the lake from scratch. Over the “summer break” I changed the oil on the outboard, replaced the prop, and installed a Garmin ECHOMAP Plus 93sv w/ GT52HW-TM Transducer w/ Panoptix Livescope System on the boat. Vaughn had a great report from yesterday with 30 fish and was going to try a repeat on the lake today. The moon was almost full last night but the wind forecast was great for the entire day-something I hadn’t seen in a month.

I got to the lake around 7AM and launched at Basalt. The water has dropped significantly in preparation for the winter rains and a tractor was cleaning the mud from the ramp as I arrived. Apparently a truck got stuck in the mud yesterday which made me glad I was in a 4WD truck. I launched and decided to test the Garmin out around the ramp. The Panoptix Livescope is a real time sonar and is an amazing technological accomplishment. I spied on some fish hugging the bottom and for the first time I saw a face to the arcs of yesterdays sonar. The cool thing about Livescope in my opinion is the ability to see the behavior of the fish. You can see if they are swimming fast or slow. You can see them circle cover and hug depressions on the bottom.  You can see how tight they are grouped over time.   I think I will to learn much about striper behavior in the lake using this scope.  I took alot of video of the screen with a GoPro Session but there was too much glare  for it to be usable.  Ive been thinking about a sunshade for the Garmin but I also want to see it while standing.   I had to crouch alot to see the detail I wanted in bright sunshine and the GoPro was blocking my view alot when I was locked on to a fish.   Hmmm,  seems like a great application for augmented reality glasses. 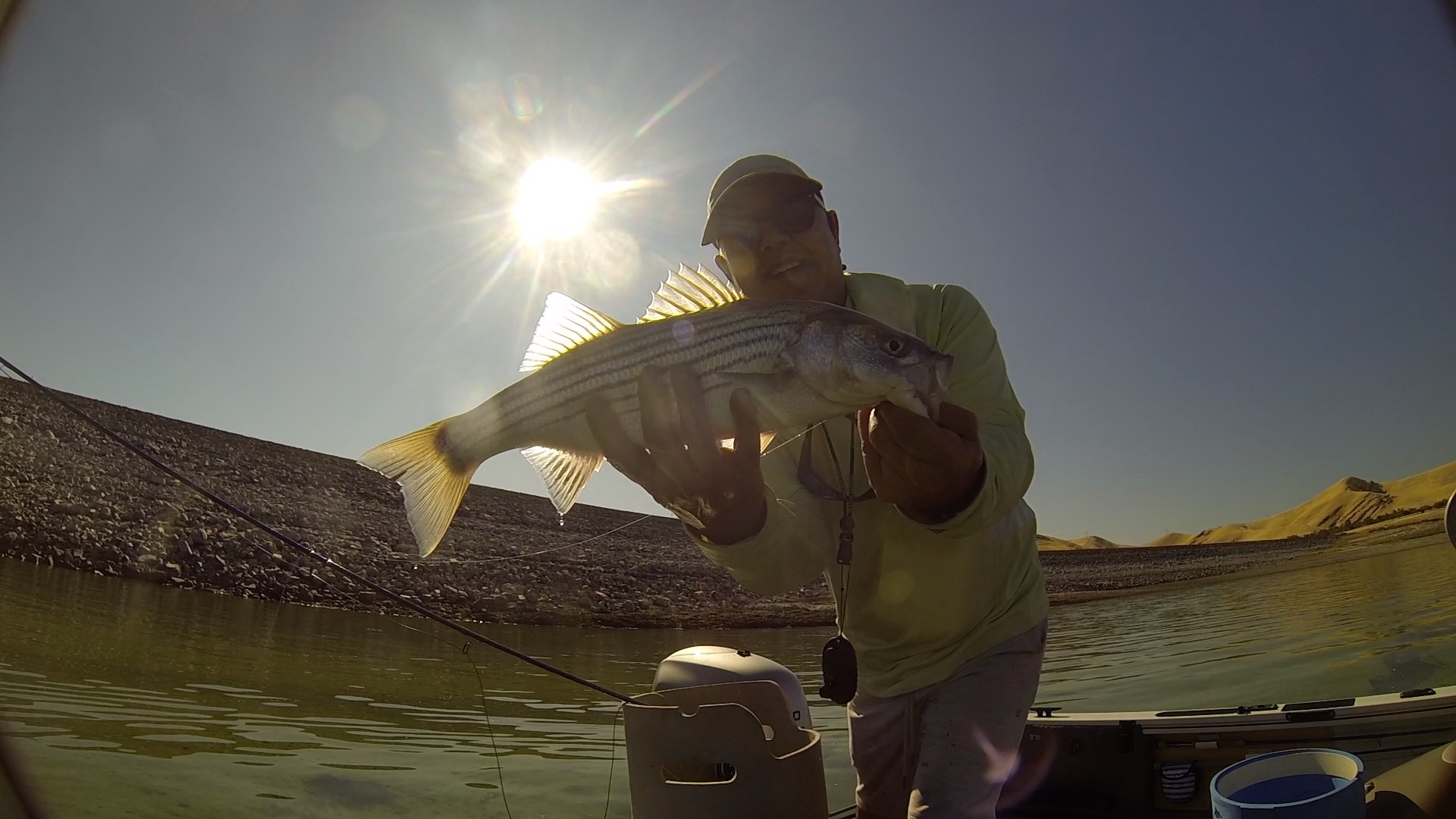 The day was pretty tough for me. I met up with Vaughn and Tim in the BOP and we compared notes. It was pretty slow for them as well in contrast to slamming them yesterday. Tim said we got “mooned”. I managed a couple fish from Dave’s Rock to guardrail. I got zero fish in the BOP fishing the shallow shoreline in the morning. I did see fish on the Livescope fishing the shallows however. It was interesting to see them rush the fly and then turn away. I tried moving the fly away from the fish as they approached and still they seemed to lose interest. It will be interesting to see how this behavior changes over the seasons. I caught a couple fish around the racks at 40 feet. I think the water is being slowly pumped out. There was a bit of current around the racks. I ended the day with 7 fish but they were all over 18 inches and I had fun getting refused on live tv most of the day playing with the livescope.

It’s going to be another three weeks before I will be able to fish the lake. The next couple weekends are for a weddings and visiting my daughter in Charleston. Im anxious to check out this lake she lives next to that has a healthy population of Black Bass.