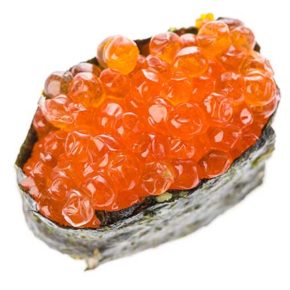 One of my favorite things about salmon fishing is processing the Roe from salmon into Red Caviar. There was a day when catching a big ripe hen salmon meant bait for the next trip. Curing roe for bait is as complex and personal as any recipe at a Michelin Star restaurant. I recall Wayne working his magic recipes on skeins of salmon after fishing as he prepared to take clients out the next day. With the skills of a surgeon, he would put on his Nitrile gloves, careful not to touch the row with human hands and mix them with a curing recipe made up of a half a dozen “secret sauces” to give him the edge when it came to attracting a bite from a King.

Wild salmon have unusual diets and lifecycles that account for their unique set of nutritional attributes which consist of unsurpassed levels of beneficial omega-3 fatty acids, vitamin D, and astaxanthin — the potent antioxidant pigment that accounts for their red-orange flesh. The size of these fish eggs varies amongst species of salmon from around five millimeters for sockeye salmon to almost 1 cm in width for chum salmon. Salmon Roe, known as ‘ikura’ in Japan, are one of the most nutrient-dense foods around. There are a variety of ways to consume salmon roe. Some popular options include as sushi, in cooked recipes, or even by itself as a type of sashimi.

After I catch a hen with roe,  clean the fish at the river as soon as possible and remove the full skeins intact.  I prefer wrapping the skiens in paper towels and then putting them in ziplocks on ice if possible to keep them as fresh and dry as possible.

At home  open the skein with your fingers and place them on a cutting board.   Scrape the eggs off the skein with a metal spoon and transfer them to a bowl.

Make a brine solution of approx 1 part salt to 4 parts water and soak the eggs in the brine from 5 minutes to 30 minutes.    At camp,  I didn’t have much access to running water to rinse and soak at this point.   I sprinkled salt on the separated eggs in the bowl and let them sit for 5 minutes while I transported them to a water supply to rinse.  I sprinkled enough salt to lightly cover the top of the row,  mixed it in and repeated for a total of 4 times.   That seemed to be the right amount of salt.   This method worked well-the consumed product had just the right amount of salt   At this point,  the eggs can be put in mason jars and refrigerated to be consumed however if you are transporting them from a destination,  this is the point where you freeze them.

Freezing breaks down roe but there are times where you have to do it  in order to transport.   If given the choice,  refrigeration is prefered.  Im thinking that I might try packing roe in large thermoses chilled and not frozen for transport in the boxes of frozen fish fillets.   Perhaps use the thermoses to keep the roe unfrozen in the the freezer storage lockers at the airport.  I think the best way to freeze them is put them in a tuperware container so the eggs are not compressed in any manner.  I vacuum sealed some processed roe and froze it.   Compared to those that I froze passively in ziplocks,  the vacuum seal hurt the eggs more and I won’t be doing that again.

Restoring the eggs after freezing is an art as well.   My good friends Dan and Al taught me a method that seems to revive the texture of the roe.   After slowly defrosting the Roe in the refrigerator,  rinse the roe in cold water to remove the broken eggs and shells.   Transfer the surviving eggs to a bowl and mix in a sparse amount of Gin.  Dan prefers Tanqueray.  I like to let the roe sit in the gin solution for a minute  and than pour them through a strainer right before putting them in an airtight container for consumption.   If your eggs are too salty,  soaking them in cold water will draw out the salt till they are perfect.   Also you can always add salt to a soaking solution to make them more salty.  The egg cell wall is an amazing thing.

Unfrozen Salmon Roe stored air tight in a refrigerator has a shelf life of two to three weeks.    In a freezer, roe will only stay good for two months. 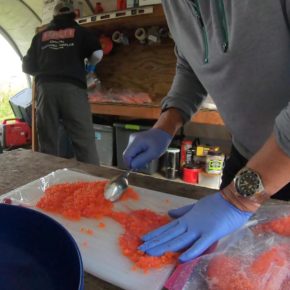 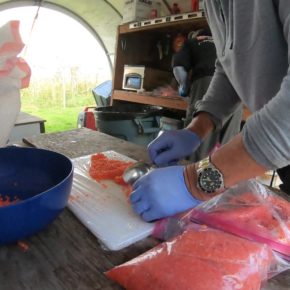 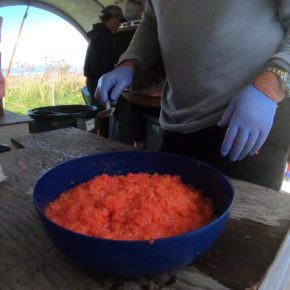 The Nutrition of Salmon Roe

My Nutritionist daughter Mia  pointed me to the NCC Food and Nutrition Database to learn about the health benefits of consuming Salmon Roe.

A carotenoid called astaxanthin is responsible for the bright orange color of salmon roe. Astaxanthin is a chemical compound found in numerous types of seafood, particularly those with an orange pigment such as lobster, salmon, and shrimp. ON of its main benefits as research shows is that astaxanthin helps to increase the skin’s UV resistance. A randomized controlled trial on the compound, featuring eighty-one participants, demonstrated protective benefits against long sun exposure. Supplementation of astaxanthin may protect against UV damage. Salmon roe is one of the best dietary sources of this promising carotenoid compound.

Salmon roe provides a significant amount of protein. Per 100 grams, salmon roe offers 29 grams of protein, which is more than most other meat and seafood products. Also, the protein is very high in quality, and all the essential amino acids are present in adequate amounts. Salmon roe is high in the amino acid lysine, offering 6213 mg per 100 grams. Lysine is a major amino acid that plays a crucial role in protein synthesis, immune health, and enhancing mineral absorption (particularly calcium).

Salmon roe is a substantial source of omega-3 fatty acids in their EPA and DHA form. Eicosapentaenoic acid (EPA) and docosahexaenoic acid (DHA) are the most bioavailable forms of omega-3 . As shown in the nutrition facts section, 100 grams of salmon roe offers more than three grams of omega-3 – an extremely high amount. Research has also shown how much DHA and EPA salmon roe contains. For example, researchers from the University of Almeria conducted a study to find the best natural source of omega-3. According to their research, salmon roe provided an amount of DHA and EPA equivalent to more than 30% of the total fatty acids present. This omega-3 content may also translate to benefits for heart health. The links between improved cardiovascular health and omega-3 are strong. For instance, several systematic reviews show that higher plasma (blood) levels of omega-3 correlate with reduced cardiovascular risk.

Salmon roe is one of the few dietary sources of vitamin D. While some fortified foods offer synthetic vitamin D2, this form of the vitamin is not as bioavailable as vitamin D3 (17). Both sunlight and fatty animal foods, such as salmon roe, offer this preferable vitamin D3 (18). Just 100 grams of salmon roe contains 232 IU of vitamin D. This is equal to 58% of the recommended daily intake. Among its many important functions, vitamin D plays a vital role in the immune system. Research in this area suggests that higher vitamin D levels can reduce the risk of infection and several chronic diseases.

Salmon roe provides a broad range of important vitamins and minerals, but the most concentrated nutrient it offers is vitamin B12. Per 100 grams, salmon roe provides 20 mcg of B12, and this represents around 333% of the daily intake value. In other words; alongside organ meats and shellfish, salmon roe is one of the best dietary sources of vitamin B12. Vitamin B12 has a host of crucial functions in the body, and it is particularly important for DNA synthesis and the formation of red blood cells. Since vitamin B12 deficiency is relatively common, the provision of such high amounts of the vitamin is an excellent health benefit.

So there must be a drawback to eating too much Salmon Roe one would think. I did find out that some people have an allergy to roe. Fish roe allergy is a rare but potential issue. Interestingly, research suggests that fish roe has been the cause of severe allergic reactions in people without pre-existing fish allergies. Additionally, in Japan, where fish roe is a favorite food item, fish roe allergy is more common. Case studies show that, in some cases, salmon roe has triggered anaphylaxis.

Finally, Salmon Roe is an expensive commodity and well worth the effort to process. A Pound of Salmon Caviar (16 ounces) typically costs around $150 at the Russian Deli whereas a Pound of Coho salmon typically sells for $8 a pound at whole foods. To think that we were using it for bait for so many years..