Saturday July 18, 2020   Every week this summer seems to get harder and harder to catch fish.  It could be the insane pressure by bait fishermen on the trash racks.  A couple boats with 4 or more anglers have been killing many fish weekly.   Three of them appeared to have come together and many many stripers were caught and kept  by all three boats.   I watched them for half an hour today to see what technique they are using and I noticed that they had success vertically jigging  between the pilings and against the pillars.   When I watched them with Binoculars,  I could see that they were snagging and hooking American Shad as well as stripers.   Some caught stripers  on suspended anchovies and others with metal jigs.   One boat was catching stripers with floats and suspended bait like they fish for Redfish in Louisiana.  The fly bite has been getting harder and the spawn is definitely over.   The few fish I have caught recently have hit the fly very lightly.   It is easy to miss those light hits since they come every 5-10 casts these days.

I got to the lake at 7:30 and there were over 10 boats launched.   I could see only one boat at the trash racks  but when I ran over there,  I counted 6.  They hid between the pillars and on the north side.   I eased up on the south tower and threw a couple of serious casts but got no reactions.   I could see clouds of fish around the  pillars but they looked like American Shad.   As I fished ,  4 more boats pulled up to the racks and I decided to break away from the crowd and fish the flats in front of the Glory hole.    I picked up a couple there and fished the dam down to Romero waiting for the crowds to thin at the racks or for the Dam Police to break up the rave.     There wasn’t enough room to back cast at the racks.   I have never seen them more crowded.   Around 1:30 the crowds dispersed and I ended up being the only one at the racks.   I think every one “limited out” and left the scene.   The first cast at the pillars was successful and I managed 6 fish in a couple hours fishing the racks alone.   I have seen this before when the bite has gotten better on the racks as the temperature got hotter.   There have been many times that I have done better in the afternoons on the racks than in the morning.    The fish tend to rise in the water column in the morning and drop down with fishing pressure only to rise again in the afternoon when the water gets warmer or the winds die down.   The fish I caught today were at 30 feet  (52 second drop at 8 inches a second).

I managed to catch 6 fish at the racks after everyone left which seemed odd.   There are so many fish down there on the Panoptix that even 5 boatloads of striper poachers couldn’t ruin the bite in the afternoon.  It interesting how the stripers swim in smaller schools about 20 yards out from the schools of shad.   I think these clouds of shiny shad attract stripers to the racks like flash on flies.  Years past I use to fish specifically for shad with small flies along the shoreline and once in awhile I would hook a striper right in the middle of a school of shad.   A friend also use to accidentally catch stripers while fishing in schools of Crappie with the panoptix.    I don’t think you can go wrong fishing for stripers around schools of other species of fish.   At least the bait fishermen  fishing directly above the schools of shad were proving that.

Just for kicks, after everyone left,   I put the boat between the pillars and tried to jig a stripers up like the “party”  boats this morning. I could feel the 1.2 ounce jig hitting fish as it dropped.   Both sonars were so dark with fish,  I thought they were broken.   On the panoptix, you could see them swimming under the boat thick from 25-49 feet.   On the first cast I snagged and lost two fish on the upward retrieve.     On the second cast,  I hooked and landed a 2 pound American Shad in the mouth.    I think it might be possible to catch them on flies with a t-14 head and a string of three shad flies.   As much as I would love to catch them on a 5 wgt,  I think I’ll rig an 8 wgt for more setting power.,  A two  pound shad snagged in the fin or mouth will fight harder than a striper of the same size.

It was a tough day,  but well worth waiting for the crowds to thin out and concentrate on the trash racks and shade lines.   I think Ill try more afternoon weekends to try to avoid the crowds.   I  think more people are fishing because of the Covid Restrictions.   I ever end up sick with  Covid,   It might be worth camping and fishing at San Luis for the last week of quarantine recovery.   I can’t think of a better way to get right an without being around anyone isolating in the camper alone and fishing under the fresh air and sun all day for a week and never being 20 feet close to another human for days. 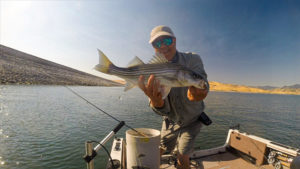