I haven’t fished the Forebay seriously for over a year. The Lake fish have been so healthy that I just can’t rationalize catching a bunch of dinks vs at minimum, having a shot at a 40 lbr (that I can actually see on the Panoptix)  or at least catching  a couple 5 lbrs around the racks.     In other words,  today I got my fix of the forebay.   As forebay days go,  today was not half bad.   I caught a dozen fish,  two over 18 inches and several pretty large LMBs.   The pumps were not creating current in the main channel and the fish were scattered in the weeds and in the deep depressions.  Bob M.  was on the forebay today.   We fished together last week around the rack traffic exactly a week ago.  We met up at the ramp and fished the channel together for awhile and noticed from the backside that the Dam Police were guarding the racks in the lake all morning till about 2:00.   I imagined all those boats that were there last week parked exactly 500 yards out waiting for that white car to leave.   Bob and I were glad we were fishing the forebay and not waiting for a turn at the racks.

My plan for the day was to fish the channel to the bridge,  try the flats near the bridge in the weed holes,  fish the ditch,  fish the wall,  fish the Medious Flats,  and fish the Powerstation.   It was a tough day looking for feeding fish with no current running through the channel – the fish seemed to be scattered.    I caught a few fish most everywhere.   One spot in the weeds off the channel gave up three LMBs.  I’ve never concentrated on catching bass but the challenge would be dealing with the weeds.    The ditch had lots of fish showing on the panoptix but as hard as Bob and I tried to cover them,  they weren’t much on eating.    I did catch a few letting the fly sink right below the boat and slow retrieving it straight up.    Fish caught that way were usually dinks.   Its good to see these yearling stripers in the forebay.   I used a 5 wgt most of the day trying out some 20lb test Cortland Braid running line.    The cortland shooting line cast like butter.  Probably the best shooting line for casting Ive tried however the Cortland Braid stretches too much for the 5 weight.  I had a hard time setting on strikes .  Hopefully I will get some Airtlow Magibraid in 20lb test soon.  I can’t find any in stock anywhere.     I really enjoyed using the 5 wgt today.  It casts a 330 grain head with no issues at all.   I can’t wait to pull on a 5-8 lb striper on a 5 wgt in the main lake.

I didn’t get any fish at the Mederious Outlet or along the wall.   The wall had a band of heavy weeds about 15 feet out from the rocks.   I fished the edges and didn’t see any fish on the sonars.   The flats a t Medrious are not deep enough to hold fish.  The water level was down a couple feet  making most of the flats I fished today a little too shallow to hold fish in the middle of the weeds.    I saw some huge carp working the weeds in the flats –probably uncatchable.   There was a day when I would have been satisfied with the Forebay’s action today,   but I find myself wishing I could fish the lake.   I would trade all the fish I caught today for one 5 to 8 lbr in the lake.

The wind prediction for the day was for 2 to 5 mph wind till noon and building to 8 by afternoon.   Well that was totally wrong.   At 6 AM it was blowing 18mph.   It died down to 7 mph at 8 AM and for the first part of the day the slight breeze was unnoticeable.  I got blown off the water at 3:00 and for kicks I called the wind line on the way out.  She told me it was only blowing 9 mph.   Fake news.

Its funny how the best fish I caught today wasnt a striper. 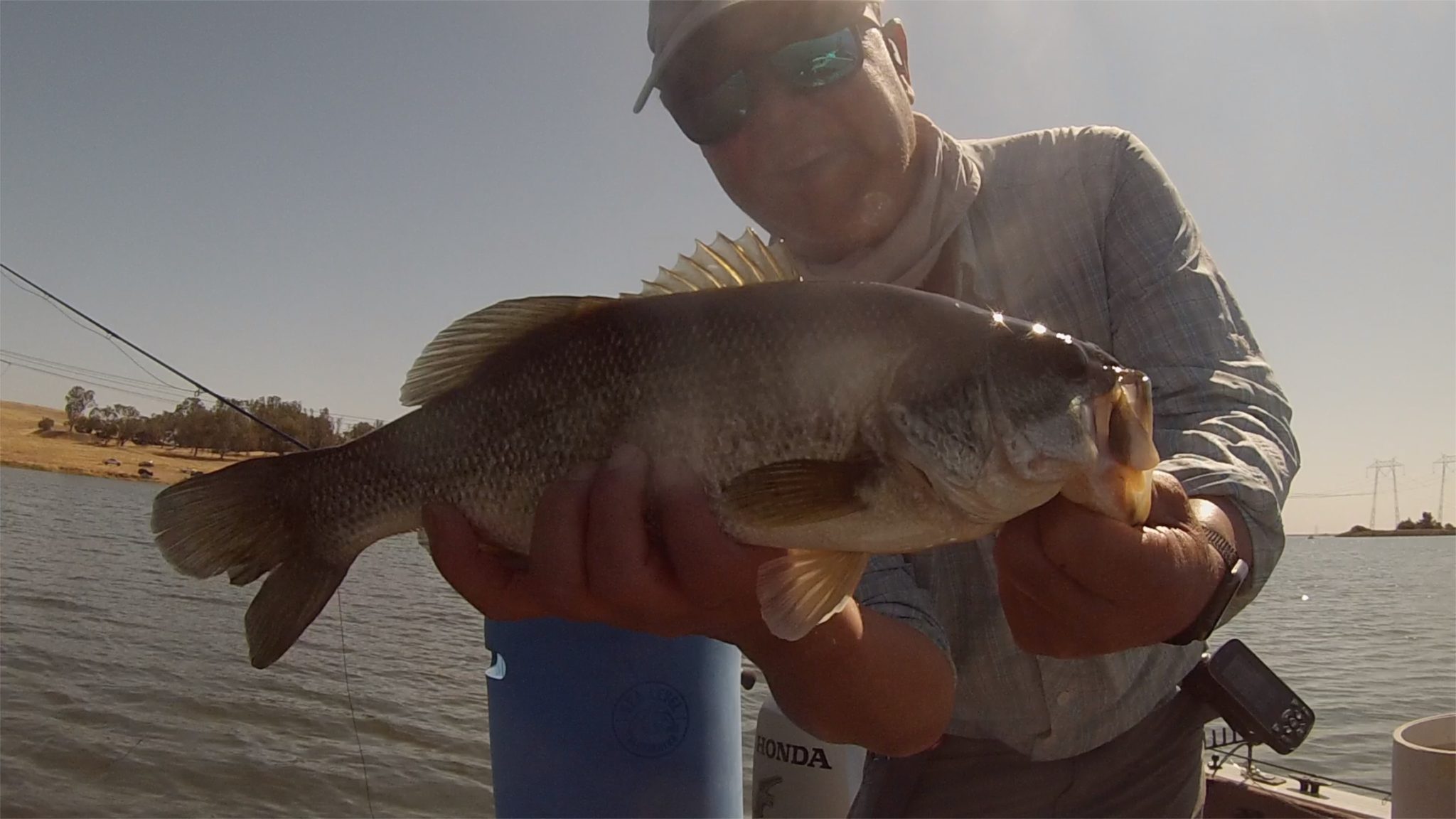 2 thoughts on “Scouting the Forebay”