Trying to catch a striper these last three weeks has been harder than buying a carton of Clorox Wipes at Walmart.  Two weeks ago, I had a trip planned with Don to fish the Forebay.  We got close to the lake, about a quarter mile past the Dinosaur Point , when we passed a Hay Truck parked in the emergency lane that was on fire.  Traffic came to a halt about 500 yards around the bend and we could see big cloud of black smoke in the eastern sky.   Helicopters were dropping loads of water from the sky and I joked with Don that there were probably stripers in those water buckets.  If so, that was as close to a striper as we got that day.  The two eastbound lanes were jammed with big rigs  and cars.  After an hour,  the smaller cars started to make U Turns onto the safety strips to drive back to Gilroy.  Finally the Highway patrol came by to tell us it would be 5 hours before traffic would be let through and to try to turn back.    The big trucks were stuck for the duration but when the three cars behind me turned around and left, there was more room to manuver,  I was able to back the boat up and make a tight reverse Y turn and went home.   We were so close and the wind had finally died down.   The next window to fish was a six hour break forecasted for the following week.   Don and I tried again on Friday but by the time Don got to my house,  the winds built up to  20mph at the lake and forebay despite the forcast  and we had to scrub the trip.   I enjoyed talking with Don Chesnek -one of the founders of the San Jose Flycasters Club.  Turns out we have many many mutual friends and he knew my dad at IBM.   Some day soon we will fish together. 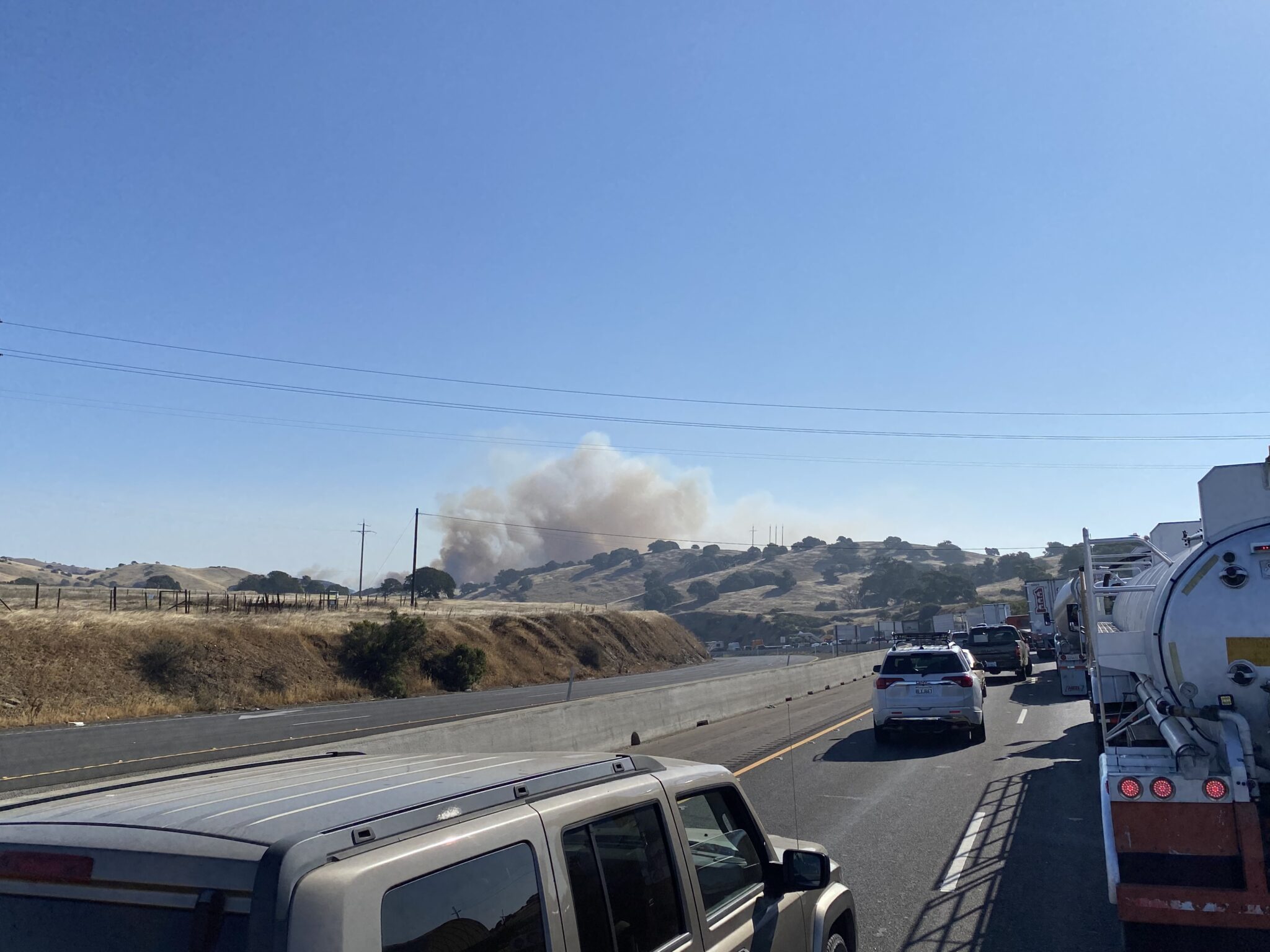 The Wind has been relentless these last two weeks but today turned out to be a rare calm day.  I didn’t believe it till I woke in the morning.  I went to bed after checking the wind line and it was blowing about 20 mph at 11:00pm.   At 6:30 the wind was 1mph and I thought the wind line might be  broken having not heard it that low in a month.   I launched at 8:00 from Basalt and decided to fish the racks first before the guard might come to kick us off for the day.    It’s pretty routine now for the bait fishermen to congregate around the racks in mornings on the weekends.  I set up on the north corner “parking space”  and  tried a couple dredges at 40 feet.    The panoptix showed almost not fish moving around the racks.   The large schools of shad were present but not moving–very odd.   Despite that lack of sonar activity, the anchovy soakers were still getting limits of fish fishing straight down the pillars.    I decided to fish the rocks on the dam and managed a couple three pounders.  The fish were not active at all despite the great conditions.   I caught a half dozen dinks off the rocks in the Bay of Pigs but today was really tough.   The only large schools of active fish were 60 feet down around the racks with an occasional hunter fish off the rocks.  I found lots of schools of “round fish” around the submerged trees in the Bay of Pigs as will as several HUGE stripers swimming around the structure in the bay of pigs.  I tried everything I could to get flies in front of them but the fish in the entire lake just didn’t seem hungry at all.  Before leaving around 4:00 and after I had exhausted my flybox options,   I decided to throw a 9 inch swim bait in the Bay of Pigs around that structure. I managed to get one of those big fish  to come up from the bottom in 18 feet of water and follow the swimbait to the boat  It was over 20 lbs  and swam very slowly  behind the lure turning away leisurely as it got to the boat. That was the most exciting moment of the day.   I brought one home for Gina and I decided to keep it alive as long as possible before cooking it.  It was great.  Fresh is best.   I ended the day with half a dozen dinks and three good ones.  Still Im happy and grateful to the Wind Gods  to have  fished today.  Thank god for fishing during this COVID pandemic.  It really means alot to me that a terrible day of fishing is better than the best Shelter in Place day in the COVID era. 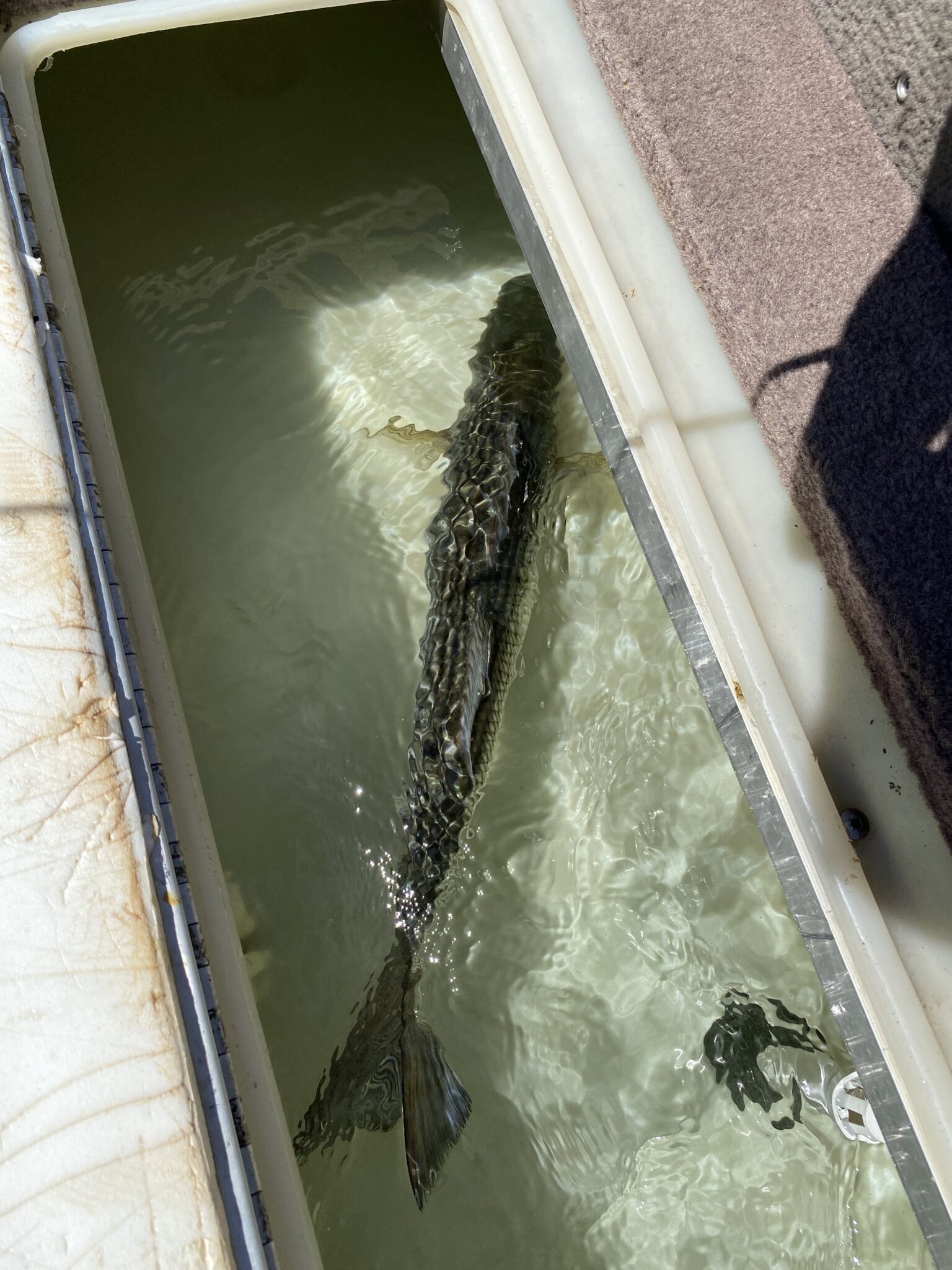 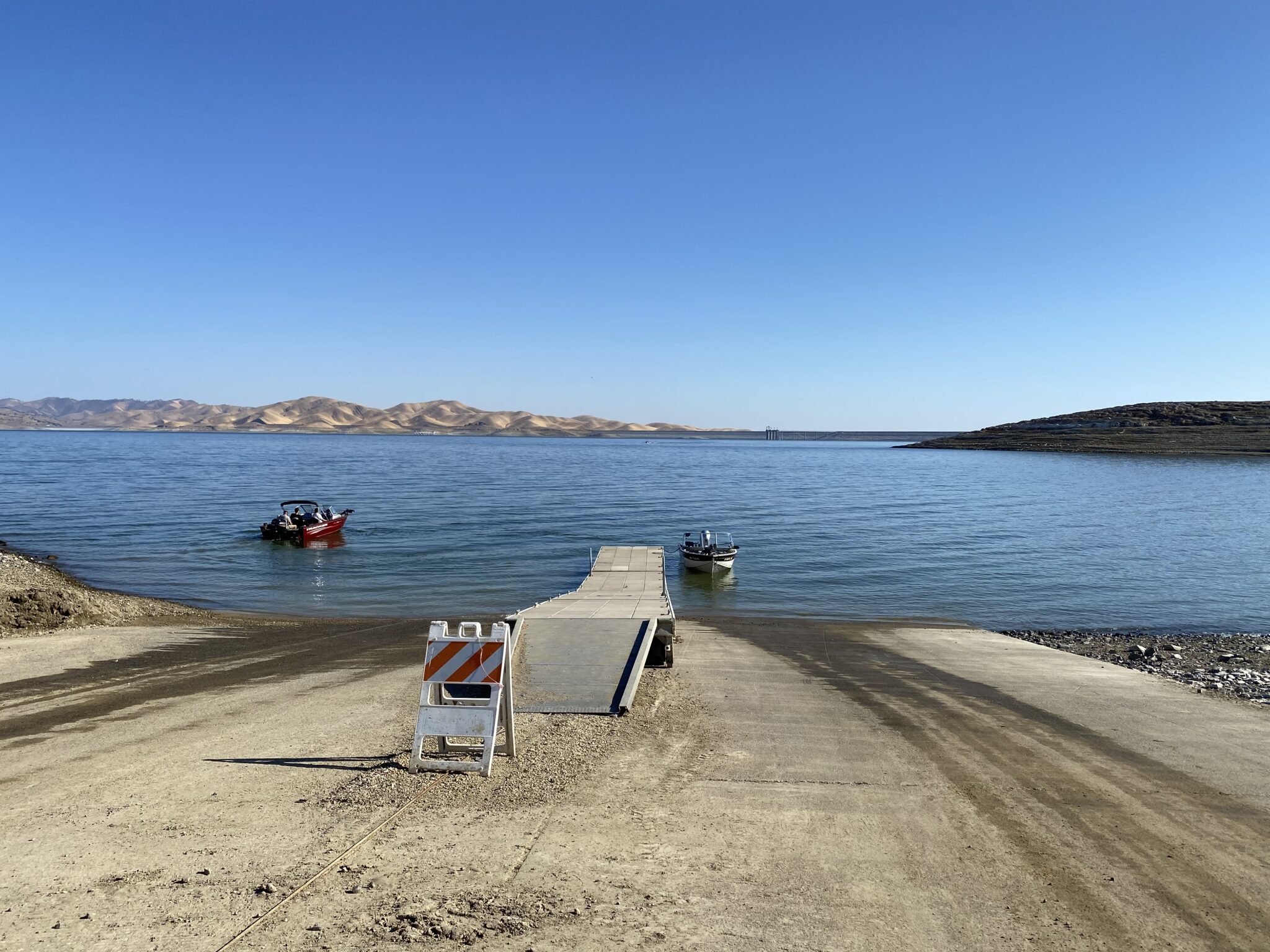 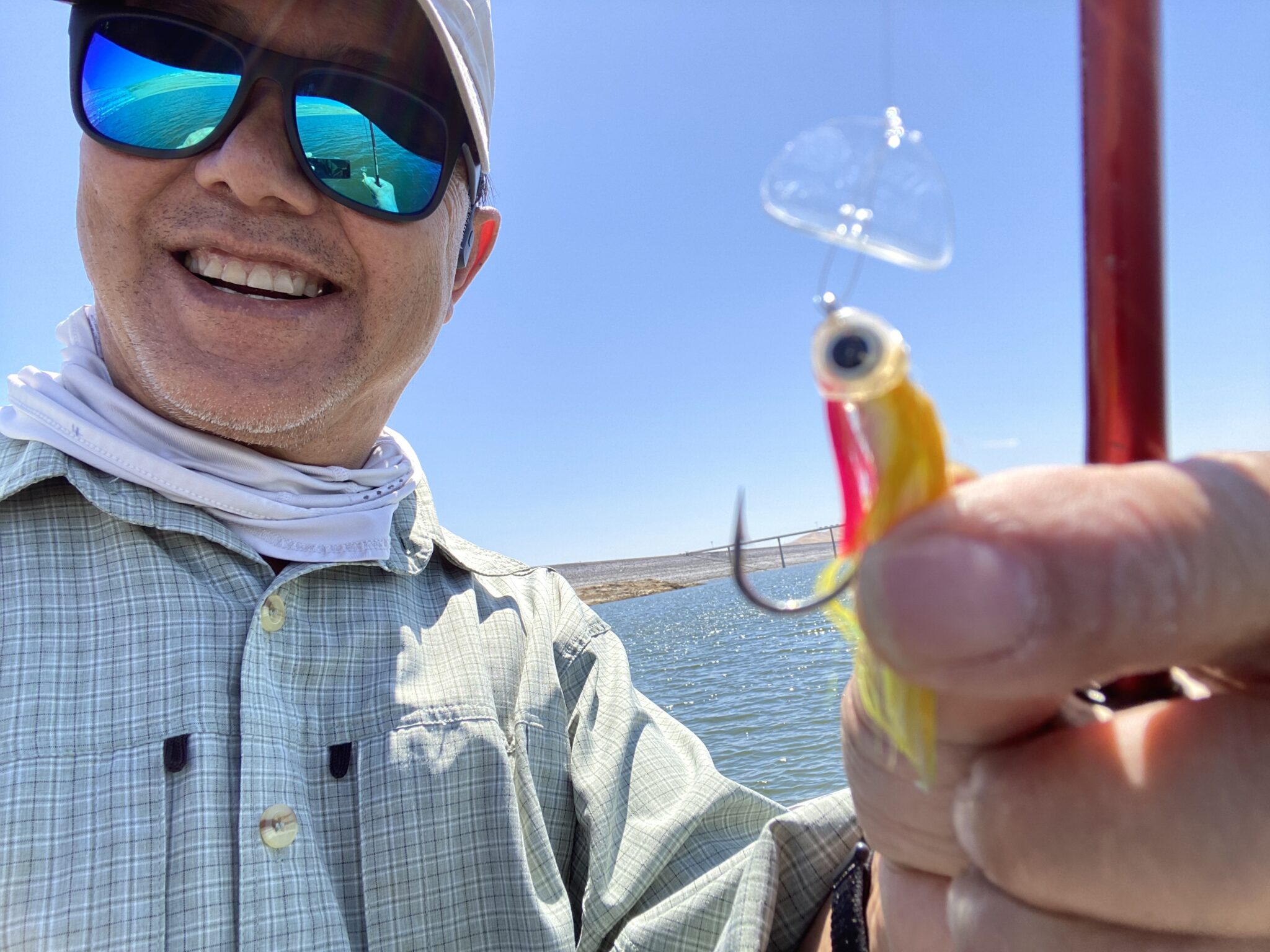 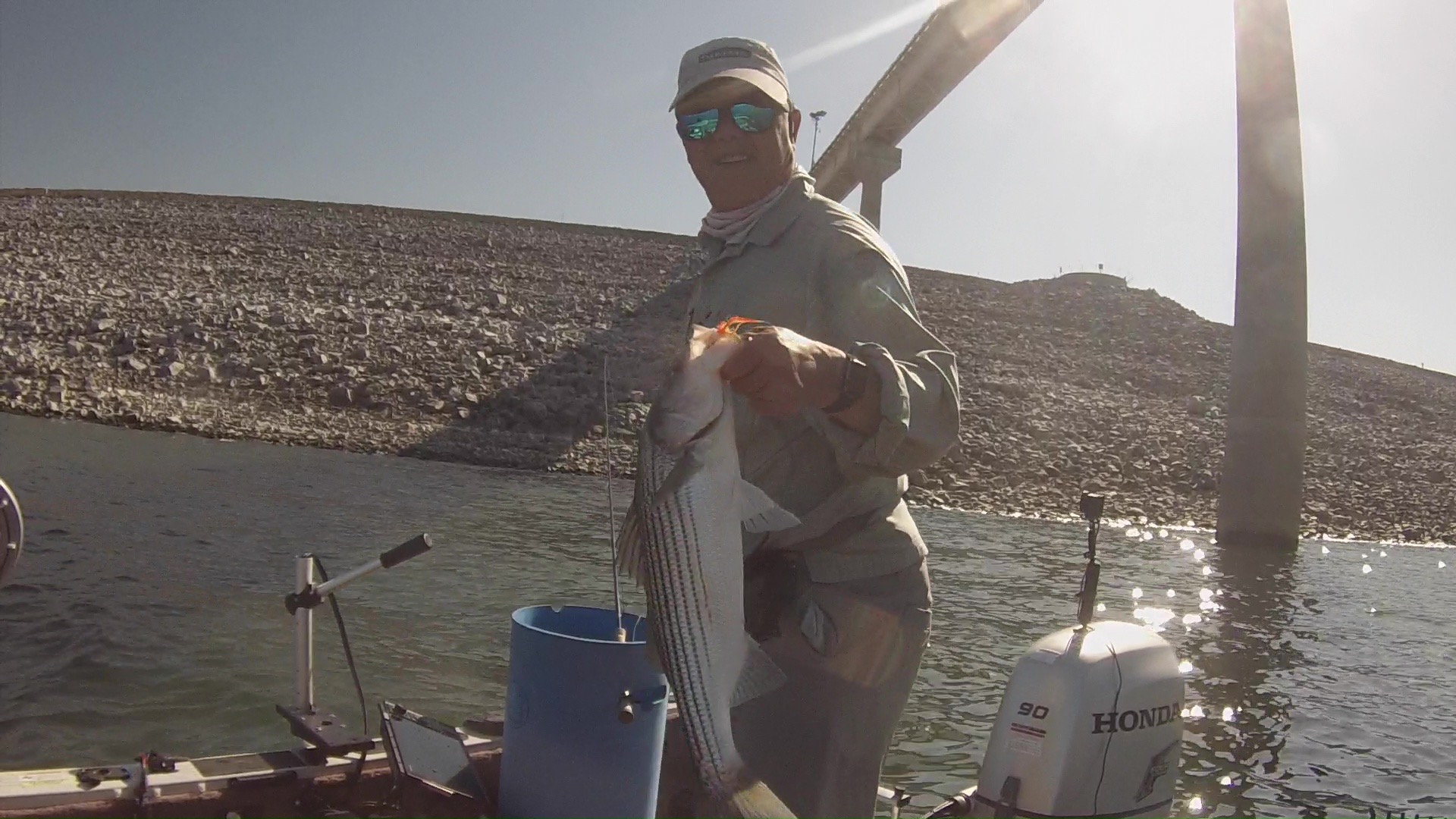