Friday August 14 -Don Chesarek and I finally made it out for a day of fishing after three unsuccessful attempts over the last three weeks.  We were rewarded for our perseverance!  We had originally planned to try the lake after hearing a report that their could be some big fish around the racks.  Brian had a great day on Wednesday but on Thursday,  Vaughn and Dan reported an exceptional day  with some bigger fish in the Forebay.  Plans were changed the night before and I loaded a couple rods with Floating lines. The conditions were stellar-no wind and slight overcast.  We got to Cottonwood around 8:00 and were the 4th boat in the water.  We had the Forebay to ourselves with only one other boat of flyfishermen in the trench.

I prepared for the forecasted heat hoping that Don would be ok.   I fired up my truck fridge freezer and boat Yeti with ice cold electrolytes.  Thew the AED in the hatch and packed swimming trunks and some towels  just in case.  Don actually did great.  At one point I noticed him getting quiet and sweating a lot,  I put a ice cold towel over his neck as well as one for myself.    The fishing got so good that I dont think you could have dragged him out .  We headed  right for the channel but started fishing the launch side shallows because we saw fish blowing up inside.    It was cool to watch schools of baitfish porpoising away from leaping stripers.   The active surface fish were mainly dinks but we did get a few 18 fish out of that side.  I threw an I line with a non weighted fishmask minnow, and a floating line with a Crease Fly.   Don was fishing a t14 and having weed issues in the shallows.  After a couple fish way inside the weeds,  I took  Don to  fish the deep water side of the channel weed line with his t14.  By  the time we got to the bridge,  I had 25 and Don had 4. I texted Steph who was fishing  the Lake to come over.    I convinced Don to put on a pulse disc and moved the boat closer to the weed edge when we crossed the channel.  Also I put the boat  close enough to the weedline for him to make his casts  right to the edge.   Don started catching fish right away and we even had several doubles.   I though the fish were surprisingly large for the forebay.  We caught a dozen fish around 20 inches and lots of 17-18. 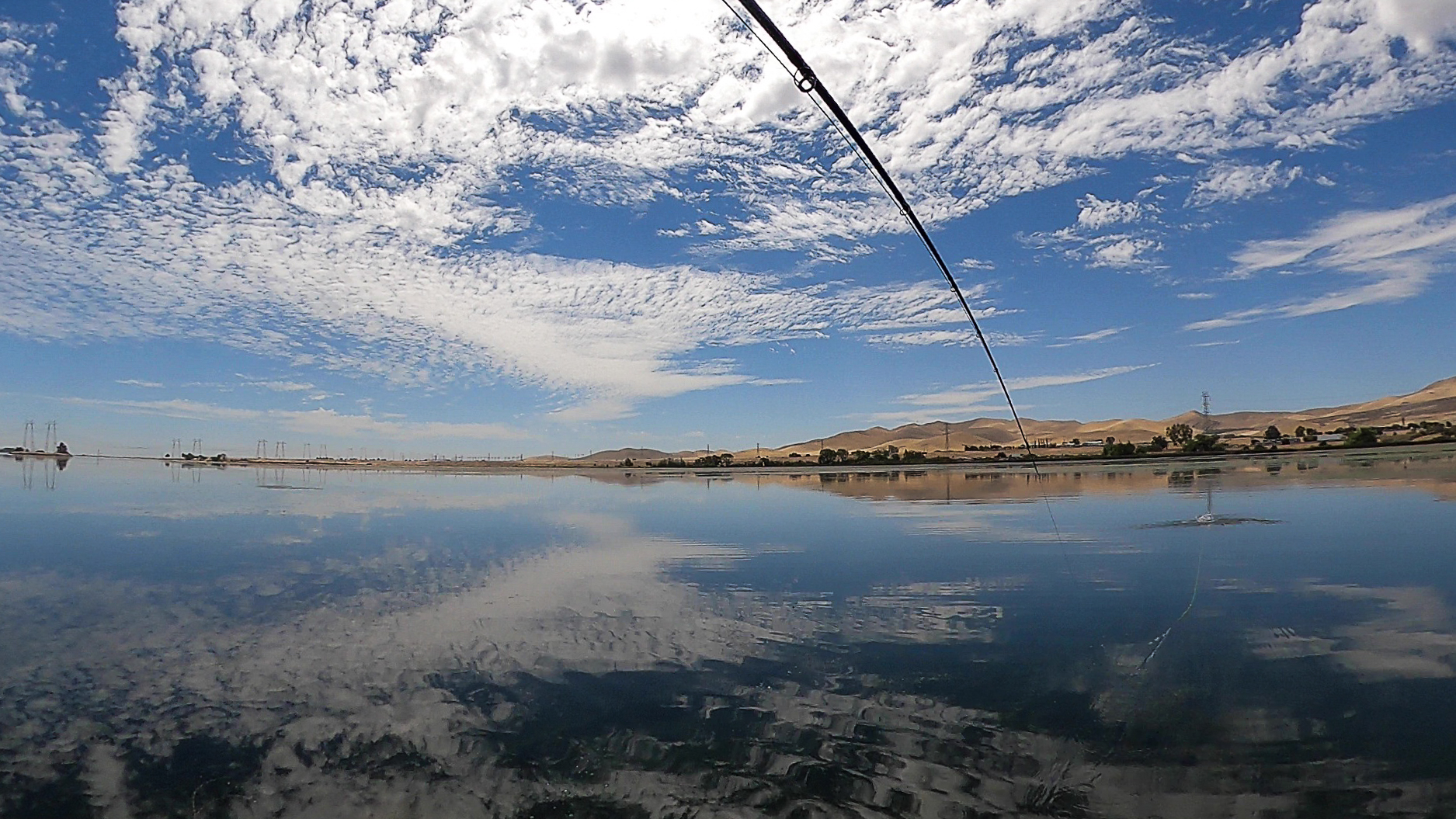 The real fun was fishing the holes in the weeds on the flats with  topwater flies.   It’s as good as I have ever seen it.   Lots of great blowups and visuals there.   It was great fun playing with top water patterns and retrieves. Don is a “cast and let sit”  kind of a guy.  Im a “chug and plug”   moving the fly on contact with the water style.    Movement was more successful today.    Some blow ups  were right in the thick of the weeds with salad hanging off the fly.  We caught one striper casting right in the middle of surface weeds like frogging LMB.  After a dozen fish and even more blowups,  we decided to rest for awhile in the weeds.  As Don ate lunch ,  I casted a 4 inch Lucky Craft Sammy Ghost, with a baitcasting rod,  working the  water that was out of fly casting range,   I went 5 for 10  blowups in half an hour.  I really wanted to go deeper into the weeds to the shoreline but I also wanted Don to get more fish on his t14 so we went back to clousers on the deep side of the weed line and caught fish at will till we were tired.   Don wanted to try some other spots (leaving fish to find fish?).   We fished the trench and the weed lines nearby but is was very slow and not even close to the action at the channel.   Don said he fished there on Wednesday (Dan and Vaughn’s Day)  and found himself sitting in 14 feet of water with large schools of dinks under his tube.  He caught 25 fish in 2 and half hours on Wednesday.  The action was very good in the channel and I think it may have to do with the cooler water we saw there.   The channel was 64 degrees and the trench was 71.  Im sure there is a small amount of water always feeding the forebay from the bottom of the lake.  We are so fortunate to have such different and unique striper ecosystems right next to each other to choose from. Plus the Surf and the Delta are an easy drive a well.   Oftentimes striper fishing can be super slow in one place and incredibly active in the other,  or whitecapping on one body of water and fishable on the other.  Though some people believe that fish dont spawn in the lake because there is no current,  the forebay always has current.  Juvenile stripers born in the forebay are easily pumped into the main lake,  keeping populations in the lake constantly replenishing.

I carry a 5wft and 6 wgt rod rigged with t-14  heads to fish for the dinks that I am use to catching in the forebay (nursery).  We caught so many lake sized fish today that I started setting on the 6 wgt like I was fishing my 8 wgts in the lake.  Setting on a good fish,  I broke a 6wgt Sage Method right below the first ferrule on the set.  My thoughts about fishing 5 and 6 wgts for stripers in the forebay have changed.   I think the lightest rod in my boat for stripers will be a 7wgt from here on out.  Too thin of a rod even though it can handle the surges and runs of a large striper are no match for that initial set  when you “stick the tick” or the end game on a very large striper.

We kept a couple fish to eat and after autopsy, the baitfish we were observing are Delta Smelt. (Wakasagi) about 3-4 inches long.  Brown  Olive over white with some flash is the ticket if you want to match the hatch.  But,  odd stuff flies were also working as well today.   Yellow,  red, chartreuse and purple also worked for us.   When the fishing gets consistently good like this,  It’s fun to mess with fly patterns and pulse discs just to see if they indeed hit “anything”. 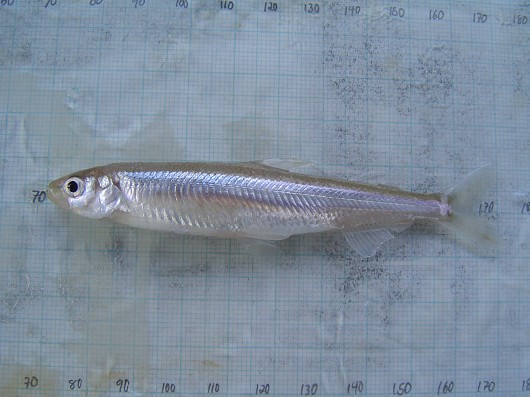 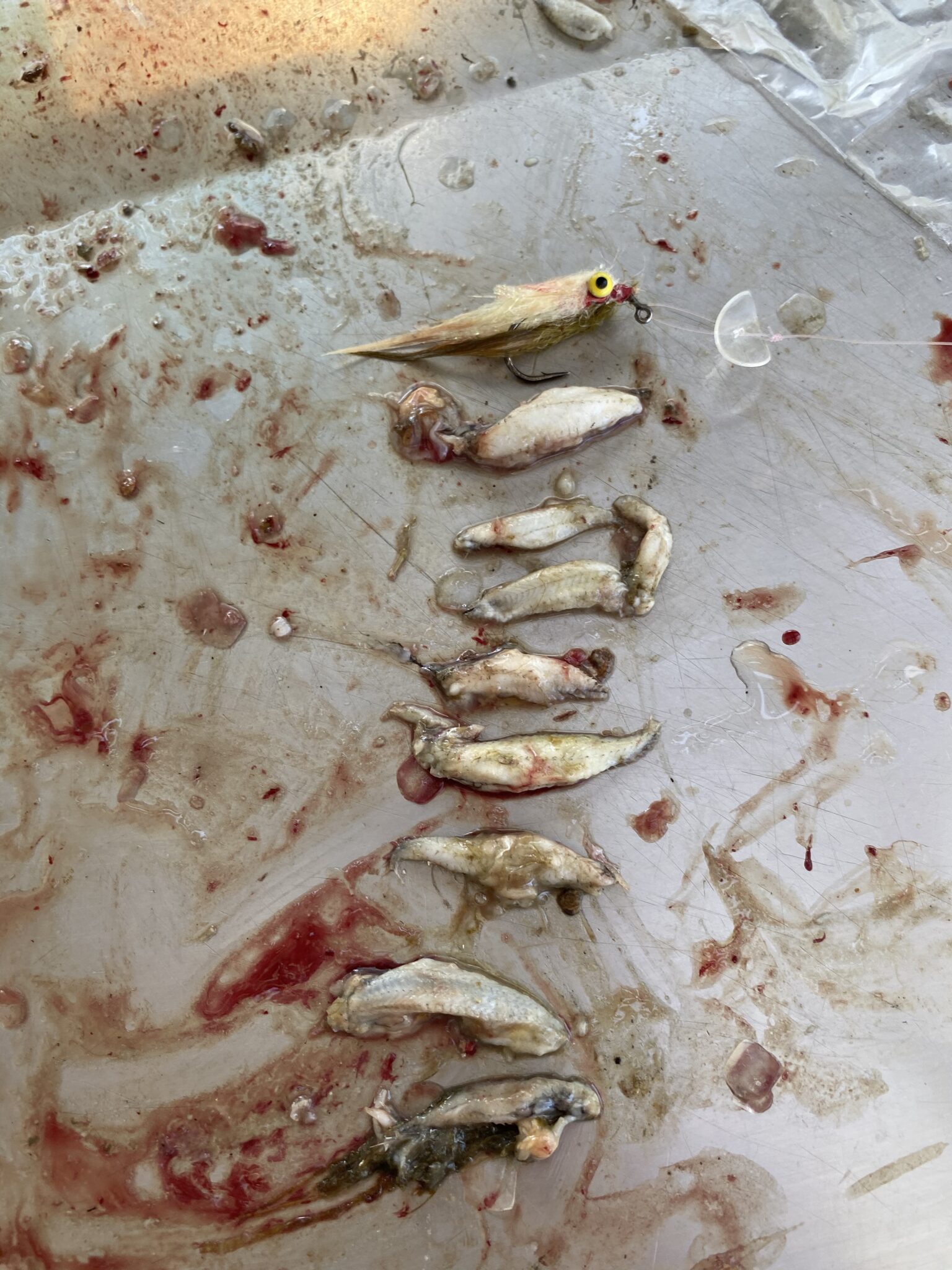 Don is great fishing partner.  He has some great fishing stories and I really enjoyed our talks about the old IBM and early days of the San Jose Flycasters of which he is one of the original founders.   Don is a treasure of flyfishing knowledge and his professional accomplishments as a Stanford PHD in Electrical Engineering  are very impressive having lived through the birth of the tech industry.

One thought on “Forebay Topwater”