Sunday August 16, 2020 (107 degree) – As Don and I were driving back  from a great day on the forebay,  I had already thought about fishing the next couple days if the wind conditions would hold.  The weather predictions for the next three days were not favorable for those perfect conditions of no wind, heat ,slight overcast and moving water that made our day and yesterdays reports so great.   Especially with topwater.  The fish are definitely aggressively hunting the smelt as their full bellies sugested.  The forebay stripers are coming up from 10 feet to hit a 3 inch minnow on the top.   On Saturday,  I left the house for a repeat session at 7:00 am and ended up in stand still traffic in Gilroy.  I couldn’t believe the Saturday Morning traffic at 7:00 in the morning.  Aren’t we still in lockdown?  A bad accident closed 101 and after an hour, I decided to turn around.  The weather predictions for the next  couple days called for record heat in the afternoon and maybe people were getting their weekend exercise early before the heat .  Still the temps were 90 degrees in the early morning.  Maybe the heat is what makes the topwater in the Forebay so fierce.   I turned around and went home and checked my Waze app for progress on the traffic jam.   The traffic finally cleared by 11:00 and I thought that a late start wouldn’t be worth the effort if the window of calm was 8 till noon. But just to torture myself, I checked the wind throughout the day  and conditions at the forebay stayed ideal till evening  despite almost ALL the predictions.   If it was totally wrong today ,  it could be wrong tomorrow since the predictions showed steady 10 mph winds throughout the day.  I felt lucky and got ready for Sunday.  Steph called and I convinced him to meet me out there for some topwater.

An excessive heat advisory  was issued by the NWS for the entire weekend.  I loaded the boat with cold water and electrolytes.    I woke at 3:00am to a rare August severe storm system in my backyard  packing a combination of dry lightning and high winds.  I called the San Luis Windline for kicks and it told me there was no wind on the forebay as I was witnessing the end of the world in my backyard.    Lightning was striking all around my house and one exploded a palm tree a block from me. It stood out in the night like a giant match stick.   Maybe the burning bush was a sign NOT to fish in the morning.  My cousin in Los Gatos took this great shot of lightning over  Los Gatos.  At 3:00 AM I was battening down the hatches as 40 mph winds rearranged my patio furniture.   I got back to sleep about 4:30 and set the alarm for 6:30. 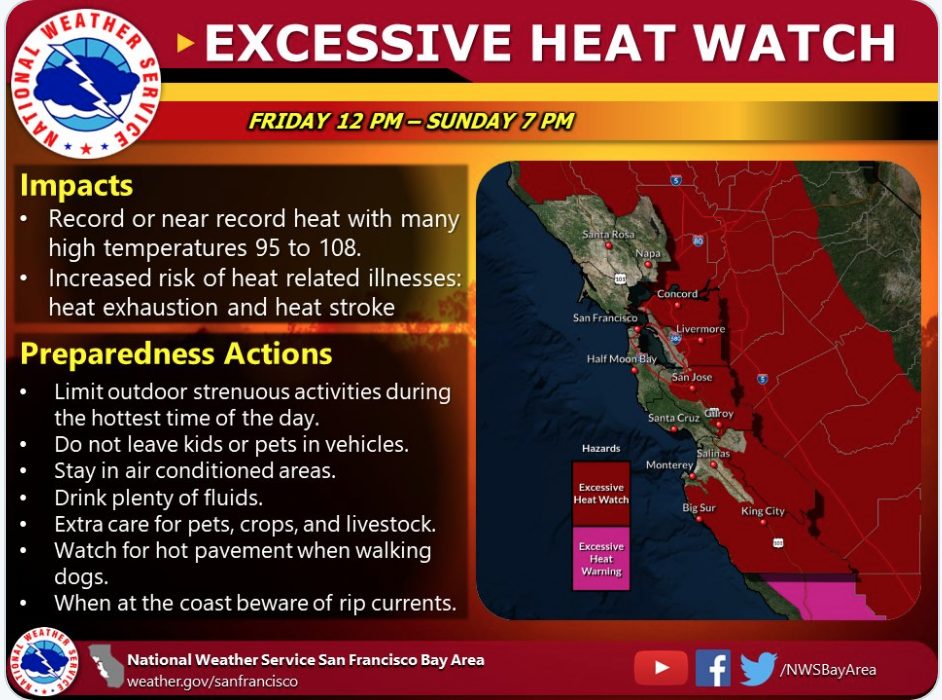 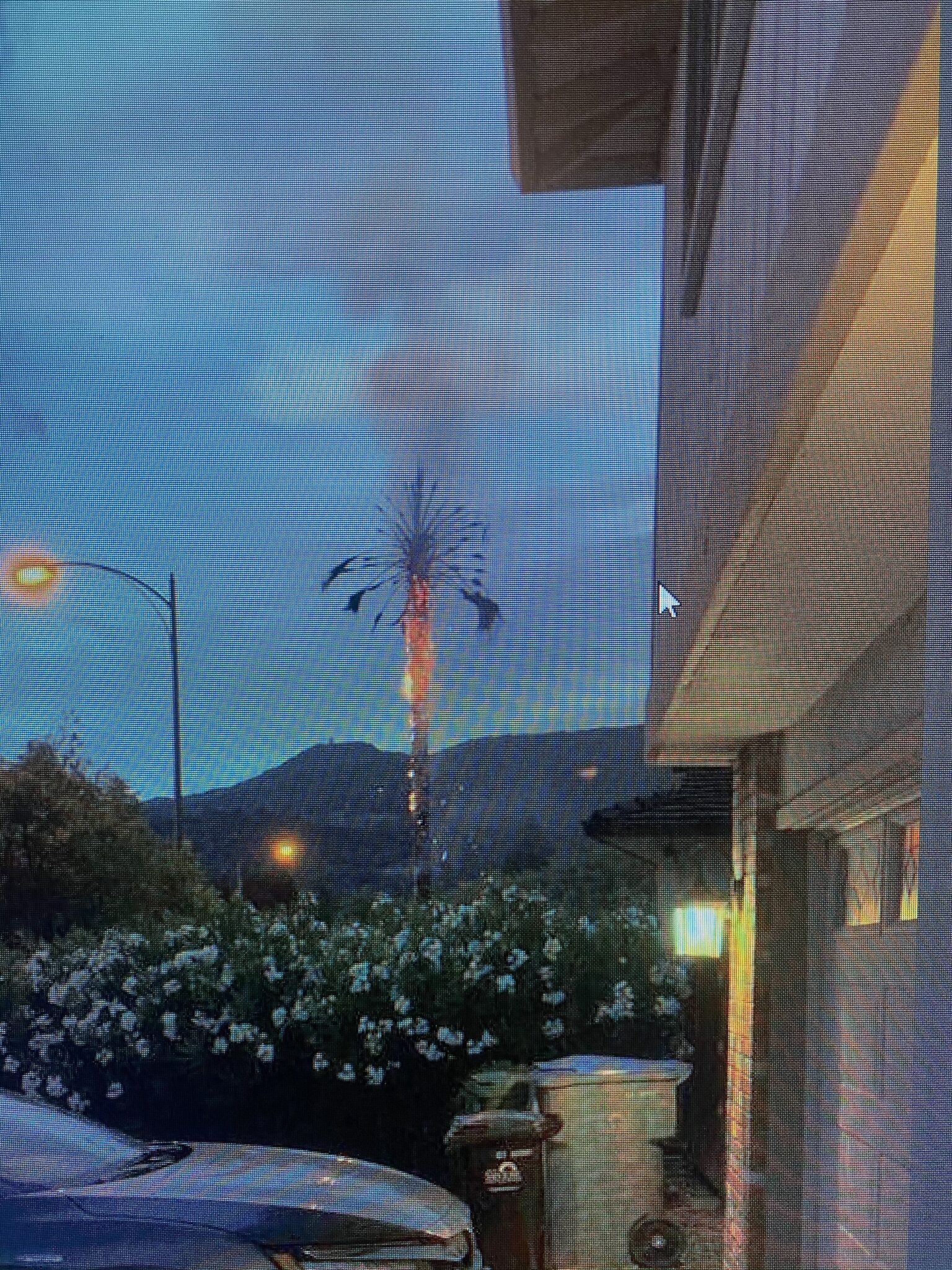 The alarm went off at 6:30 and I checked the wind again.   I made the decision that if the winds were 10 mph or more,  I would bail on the forebay topwater.  The wind line called it 10 mph and I went back to sleep.   I woke an hour later to a text from Steph who was also thinking of going to the forebay.   He was launching and asking where I was. He texted me a picture at the launch–the water was glass.   Thanks Steph– your text was the motivation that I needed.     I couldn’t get the boat hooked up  fast enough and pulled up to the Kiosk at 9:00 to a 15 car line of non boaters paying to get into Cottonwood.  Hot weekends at the forebay are a zoo but fortunately, not many boats launching.  There were lots of Jet Skis though.   Lucky for us,  the jet skis stay out of the channel because of the weeds. Nobody was wearing masks except the park workers and I was excited to get out on the flats quickly and away from the crowds at the dock. It took forever to launch but when I got going,  I noticed very few fishermen in the canal.   It was only Steph and I and a couple Kayaks all day  in the channel on a weekend.  There could have been 10 others there and we would have still done good fishing flies.

Steph was fishing the shadow of the islands near the power lines when I pulled up.   He had lots of bites and 4 fish with a two hour jump on me.  I suggested we go fish topwater while the conditions were perfect and he followed me to the flats near the bridge.  As we approached,  I pulled out my baitcaster  armed with my favorite forebay topwater walker-a Lucky Craft Sammy 100 (4 inches gigantic Delta Smelt!)  The flats looked perfect- glassy water,  overcast  and hot.   The problem with fishing topwater is that not all the holes in the weeds have hungry fish in them.   The edge of the deep water is alway good but I wanted to fish the inside first. I use the baitcaster to reach water that I want to go fish as a searching tool.   I started doing that at the lake a couple years back when I learned how the peacock bass guides in Brazil use a  “wood chopper lure”  with no hooks to find hungry surface feeding fish before putting flies on them .  I made a long cast across and in front of Steph’s bow and churned the lure about 30 feet before a school of Stripers started crashing the abnormally large Wakasai minnow.    Steph was hooked up on top on this next cast.   I put on a wood popper and was also hooked up on the next cast.   We  lost count after dozen fish.   The heat started to build but so did the wind around noon.   We lost the glass and went out to the weed line to fish clousers which was a good move.  I love fishing these conditions more than fishing deep in the lake.  No counting and having a target to cast too is a constant challenge.  Navigating and maneuvering  the boat in the exact right spot and making good drifts or lines to stay in the zone is a constant math problem.  Plus fishing in the weeds hides the boat more  allowing you to get closer to the fish without spooking them.  It really started to blow around 15 mph  around 1:30 and Steph headed home.    I decided to fish the last couple hours alone posting upwind on the weedline and making long  downwind casts parallel to the weed edge.  That turned out to be the right call and I picked up another dozen fish slipping down the edge towards the bridge.  One fish went 23 inches and with a load of weeds on it,  felt much bigger.   I left for the launch at 3:00 but didn’t get my boat on the trailer till 4:00,  The launch looked like a carnival. Boats were moored, Jet Skis were circling,  people were fishing and swimming off the launch.  I got video of a guy trying 5 times to back his trailer in the water.   Now I remember why I dont fish on weekends,  but at the end of the day, i was really happy about the day,  I didn’t suffer heat stroke,  I didn’t get hit by lightning, I caught topwater fish for 4 hours and caught fish on the clousers at will with this seasons best fish on the forebay with 34 fish to the boat.    It was a great day and I’m really glad I went out despite the delays and fears.  I say just do it and roll the dice on the windlady.  At least I have something to edit during the rolling blackouts at the house. 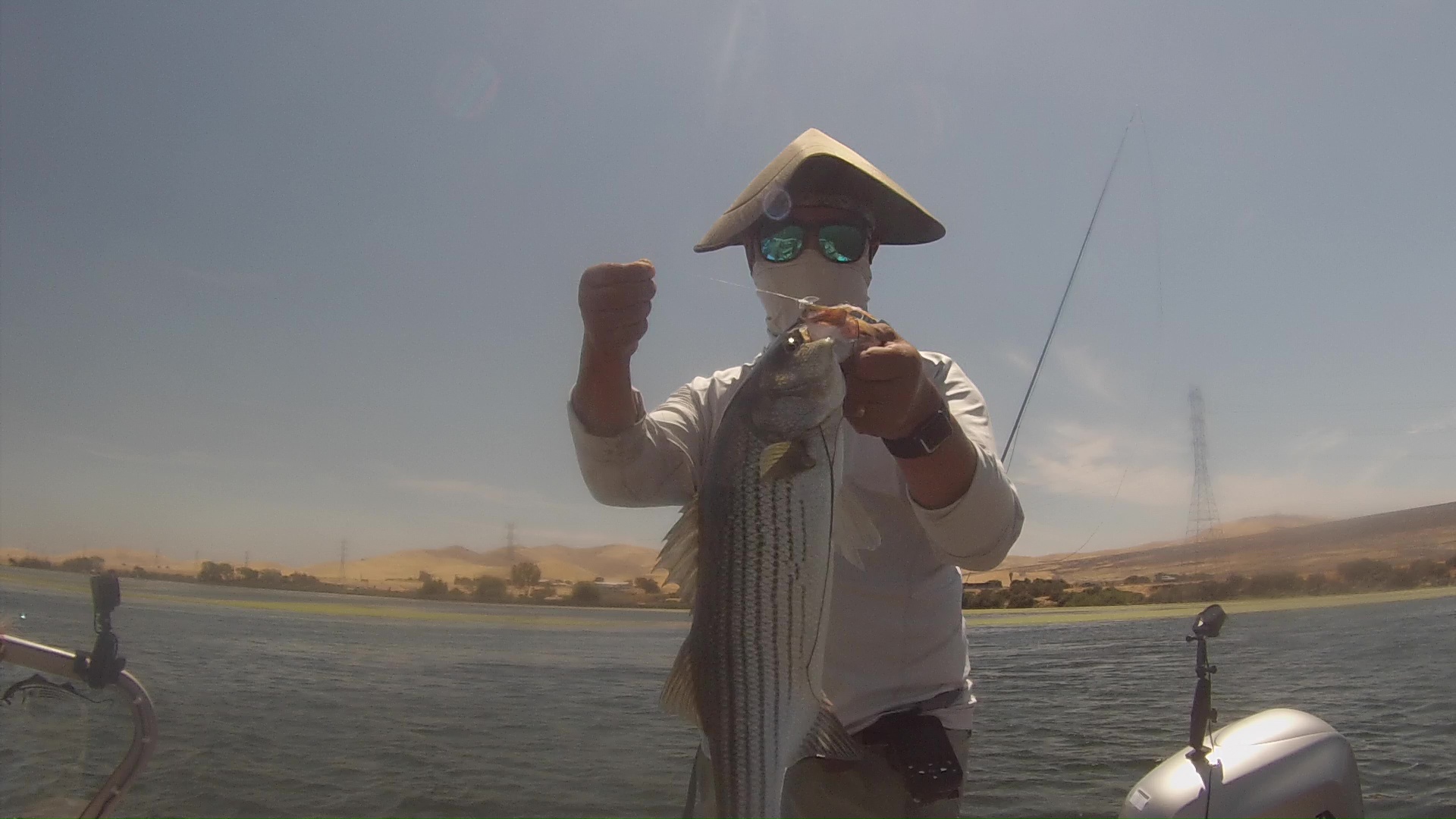