SEPT 4, 2020 FRIDAY -It’s been two really long weeks since fishing the forebay due to the closure as a result of the SCU Lightning Complex Fire that started the night before the last time I fished. Especially difficult because the fishing has been so darn good. Vaughn caught a 25 lbr yesterday in the channel and Dan and him racked up 50 fish. I was very excited to hit that channel as soon as possible. I pulled up to the launch at 8:00. Vaughn was parked at the launch rigging rods and first in line.   Despite Vaughn’s strategic parking across the launch lane, I managed to pull around him and launch (with his permission). I figured Vaughn was pretty hot to get on that spot again this morning.  Dan mentioned that another even bigger fish had  followed a fly right to the boat. There were some fish busting right in front of the launch and I decided to try to work on them with some topwater and not speed off to the channel to poach Vaughn’s spot.    I couldn’t keep up with the busting fish and gave up when Vaughn launched with Larry.     I followed him to the channel and set up on the opposite weedline. I worked the weedline hard just like I had done two weeks ago and only got one grab from a small fish all the way down the channel. The fish were gone. The conditions were about the same except for the absence of current.  Vaughn and Larry got into some on the opposite bank and had 15 at the boat .  I decided to go look elsewhere to fish when i reached the bridge  . That’s when the banana kicked in.

Last week I started getting cramps in my arms in the afternoon. it was probably from dehydration since the afternoon temps approached 103 or it could have been from landing alot of stripers. I thought it might need some more potassium today so I ate a banana for breakfast. I had my reservations about eating it, but I thought it probably would be ok as long as I didn’t bring it on the boat. The bad luck started around 11:00. I got the worst backlash of my life on my baitcaster using this new “Nano” line (it’s back to braid for me). The entire morning was a blowout fishless hot mess. It seemed like my running line wasn’t behaving all morning and I fought it all morning, around 11:00 when I left Vaughn and Larry in the channel, I stopped to fish the island and pulled into the weeds to fish uphill.  As I drifted into the weeds and  tried to deploy my Ulterra, it started to beep and the error out. I tried jiggling the head unit and pushing it down as I hit the deploy button but the remote kept saying “paused”. Everytime I unpaused it, it would error. I finally noticed that when I stowed it last , the head of the motor didn’t turn 90 degrees when it stowed. After half an hour reading on the internet, I learned how to realign the head and reset the motor. There is a switch on the head cradle that has to be engaged by the head in order to deploy the motor. I held it down and hit the switch and deployed the motor with the head still 90 degrees off. I then hit stow and paused it before it reached the cradle. Turning the motor head with the footpedal 90 degrees I corrected the stow position and then turned the unit off.   Next I reset the computer on the motor by holding the power button down for 15 seconds until the red light started to blink. Then I turned the motor off and on again which programs the position of the head into the motor. When the remote connected with the motor, it showed motor stow paused. When I hit unpause, the motor seated in the cradle correctly and all was good. I was about to go home fishless  after working on the motor for an hour and a half. Damn Banana.

It was about 1:00 pm when I started fishing the weedline between the islands and Mederous.  I had a renewed purpose to save the day.  The wind died down, the water got glassy,  and the water skiers and jet skiers started making the round and buzzing me. It was more misery and I thought this wasn’t going well. . As I pulled up to the mouth of a big weed cove the wake from the last boat was just reaching me and entering the cove. As the waves went through the glassy water of the cove, Stripers started crashing bait on the surface all around me filling the entire cove.  The Skier’s waje pushed the school and bait right to the weed edg from the deep water.  I started frantically casting  and fish, follows on nearly every cast.  They were mostly Dinks, but I wasn’t picky at the moment and it was the adrenalin was flowing again.   I positioned my boat at the mouth of the cove trying to keep the school boxed in and that seem to work for about an hour. They were small fish from 14-18 inches but they were eating flies like crazy and it was great fun. I tried to land and release fish as fast as possible expecting the action to slow down as soon as the school moved out. I saw fish breaking the surface deep in the weeds. The school actually moved into the weeds toward the shore. After an hour they were gone or so I thought,

The afternoon was getting hot (95) and I decided to rehydrate and eat some lunch, As I ate lunch another school of stripers started busting bait behind me in about 15 feet of water. I grabbed my crease fly rod and chased the busting school.  Unlike the morning school,  this school stuck around and I had a half a hour of fun topwater action.

I caught lots of fish today, but that 23 lbr eluded me again. Vaughn’s fish is the biggest fly caught striper in the forebay in years that I have heard of. It’s great to know that they are in there and they are catchable still and I will fish the Forebay knowing that big fish are still in there.    I lost count of the dinks I caught today but it was great fun. 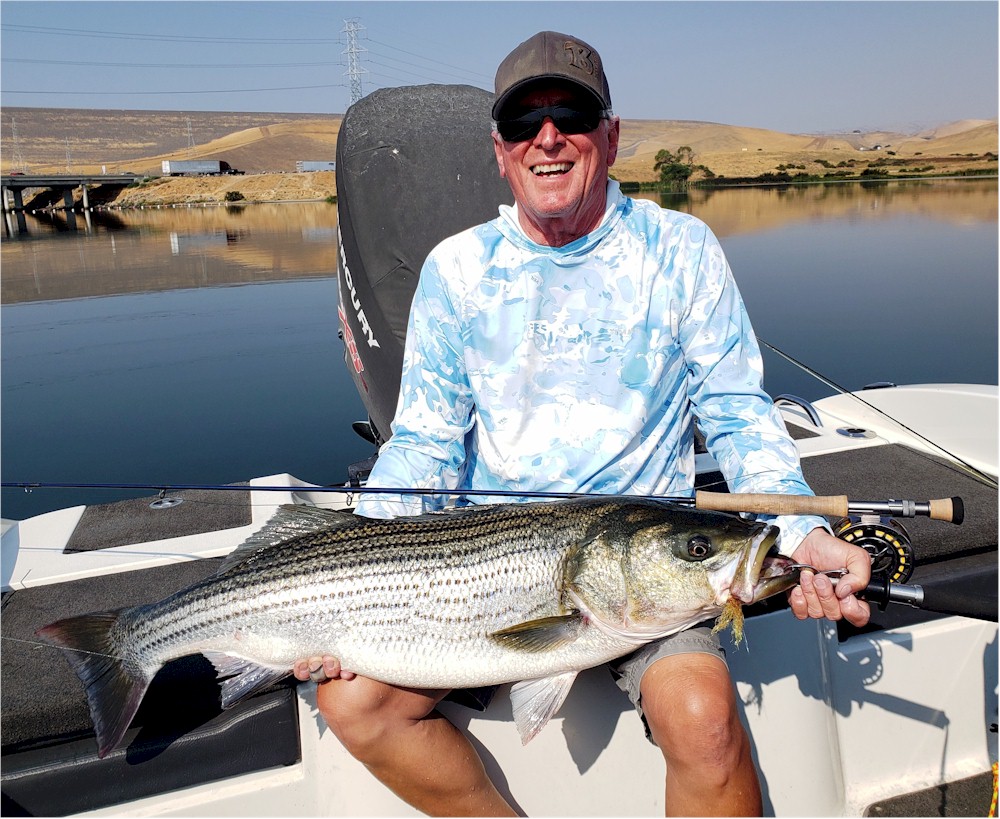 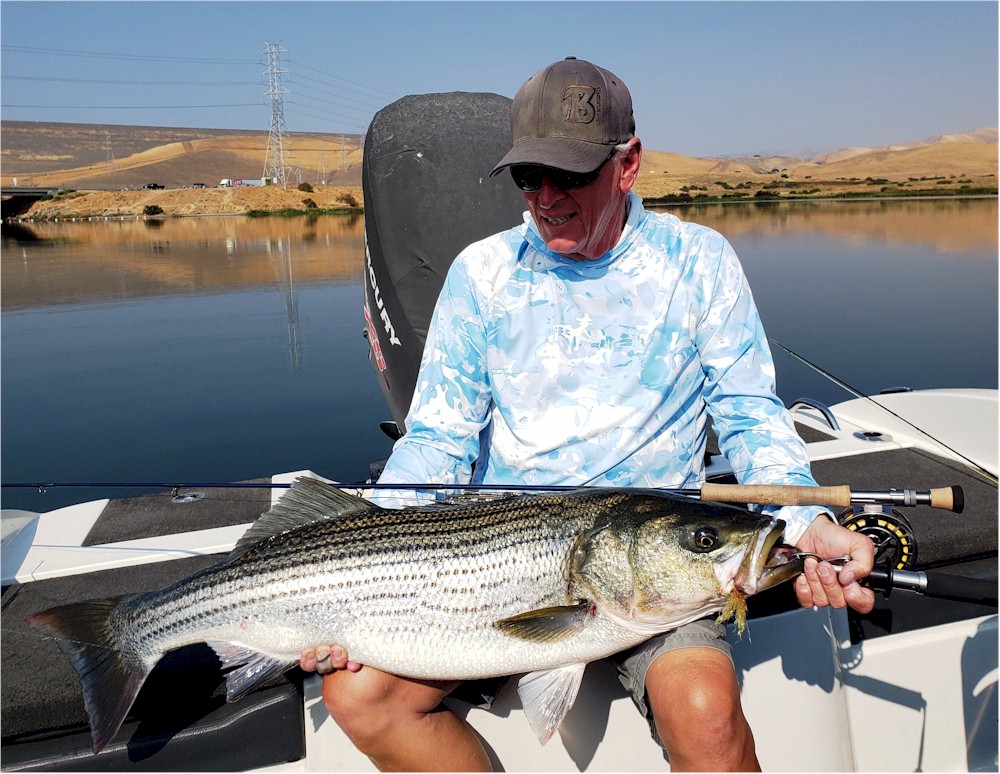