The winds of March 2021 have been relentless and it’s been tough to coordinate my off days with the calm windows.   Two Days ago,  Brian got his PB at the trash racks- an 18 lb beauty.   God know he’s put the time in.  I think he fishes San Luis and Forebay more than any of the regulars  lately.   The man is also relentless .   Brian learned the fly fishing game on the lake only these last couple years.   It took many years for me to get where he’s at now in such a short time.  I thought I would head to the racks to see if the Big fish were up from the bottom.  The wind predictions were favorable, but at 6 in the morning,  the winds were not laying down and the lake was closed.   The winds finally dropped down to a reasonable level and I headed the lake at 10AM.   The plan was Launch at Basalt and pound the Trash Racks deep .   When I pulled up to the Basalt launch,  there wasn’t a single trailer parked and I soon realized it was because the silt had filled in the launch ramp 6-12 inches deep.   The wind was starting to build and i decided I would try to Launch at Dinosaur Point.    After schlepping down to the Dino Ramp,  That ramp was also barely launchable and now I was seeing white caps in the middle of the lake.   I decided to Launch at the forebay.

All the Searching for a Launch ramp took an hour off my fishing as I launched at O’Neill Forebay,  one of three boats.   I saw a couple boats coming in at noon which is never a great sign.  But the water looked nice and calm and I remained optimistic since Brian caught over 20 last week in the Forebay.   The first thing I did  was fish the piers to the south of the launch to tune up my Panoptix.  There are always fish around those six pilings and they are typically hard to catch.   I had forgotten the settings on the unit to optimize seeing the fly in the water and spent an hour tweaking the gains and settings. 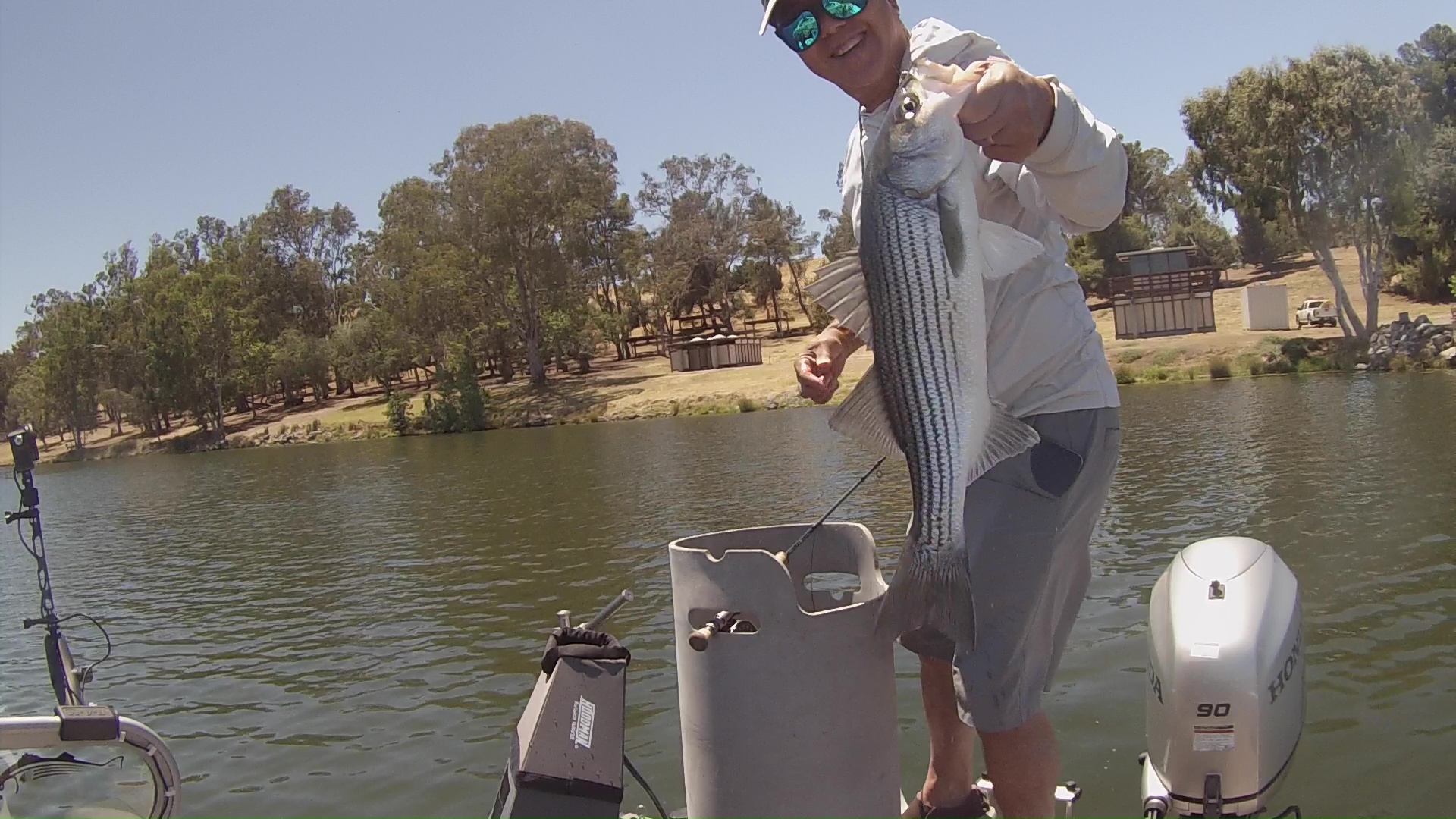 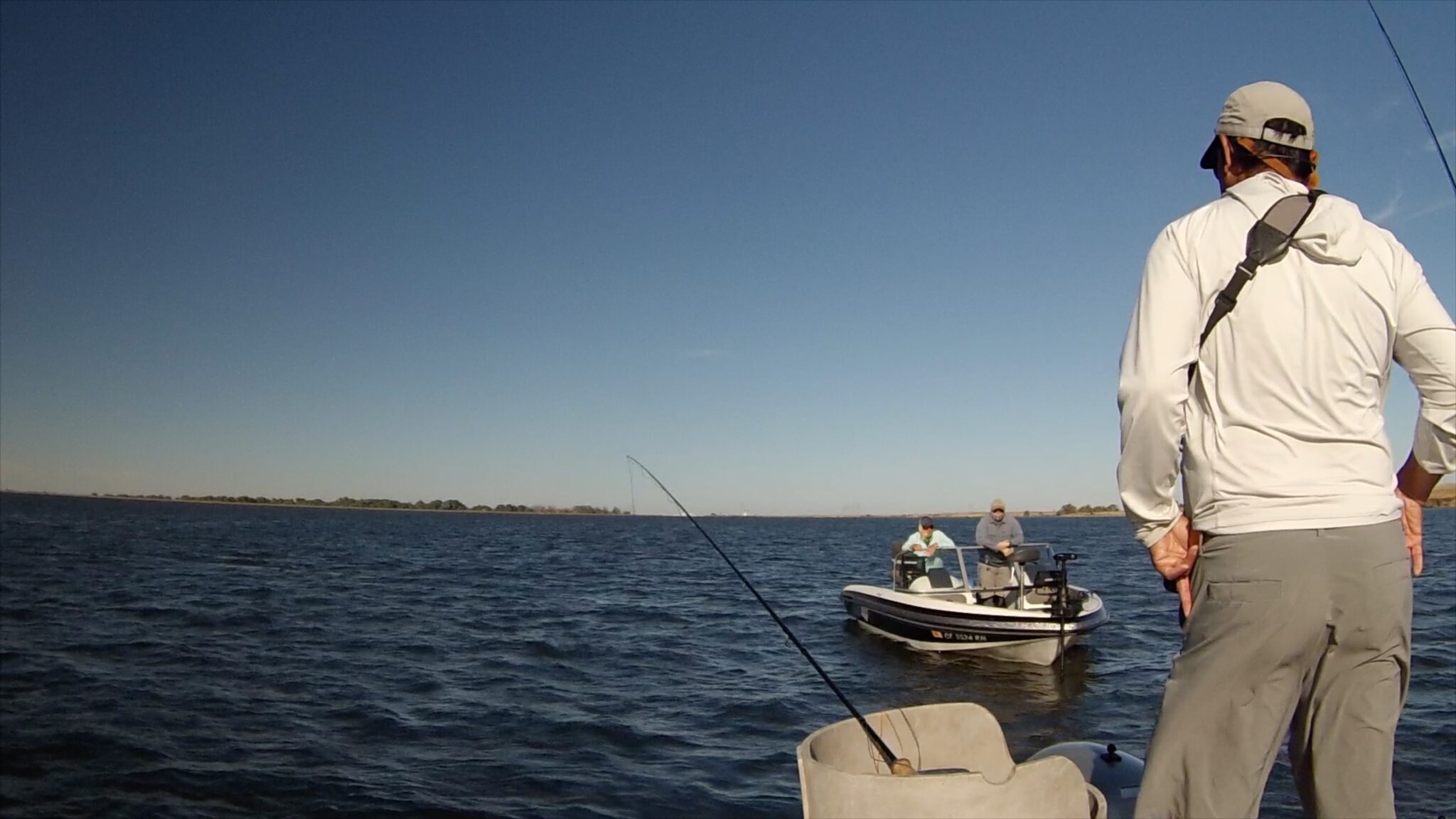 After tuning the Panoptix,    I fished the pilings and got on nice one before heading out to explore the deep sections off the powerplant that were successful months ago.   Areas around the last north buoy usually had large schools around it but not today.     The decided to work the rock wall north of the powerplant.    That area was also slow with only a couple dinks.   Next I fished the 156 Channel.   The weedlines were still underwater  and there was no current from pumping.   I think current is necessary for the channel to be good,    At that point I received a message from Vaughn and Dan that they had caught a bunch of fish in 10 feet of water in the  Medrious flats.    That was good news and I pulled into the shallows around the trench and started hunting for fish.   I managed a few here and there but no hot bite.  There were a few eating fish in the shallows at least.      At 4:00pm I decided to fish “the Trench” were years ago,  Vaughn, Steph and I would corral schools a fish between our three boats and catch fish all day long.   Back then I used a Fishing Buddy Side Finder to look for schools out from the boat and I was Super excited to use the Panoptix in Perspective mode to look over that area again.   As soon as I started scanning the  Island Side of the Trench,  I was on to schools of eating fish and It never slowed down.   Targeting fish with the Panoptix was like Shooting Clays – Pull and Lead .  I could see Vaughn and Dan drifting 200 yards downwind  along the trench and they were also catching fish at the Medrious side of the Trench.    The trench is a depression in the forebay that runs from the Island to the corner of the rock wall.  There is a Cable or Pipe in the middle of it and the bottom has lots of round depressions in it plus a couple tires.     The Panotix worked in spectacular fashion allowing me to visualize the schools which seemed to swim in circles in the area.     After landing a fish ,  all I had to do was rotate the boat till I saw the school 90 degrees to the boat and then cast.     It was pretty non stop for about for a dozen fish.    Vaughn and Dan decided to leave  as the winds were building and seas got rough.    We talked for awhile on the water and they had caught upwards of 20 fish all along the trench.  I think most of  the fish in the Forebay seem to be hanging out here.  Maybe they will leave when the weed lines get more established.  For sure there were some random fish cruising the shallows as the weeds are starting to rise off the bottom.    I didn’t see any  surface action and I did throw a floating plug just to search for topwater with no blowups. 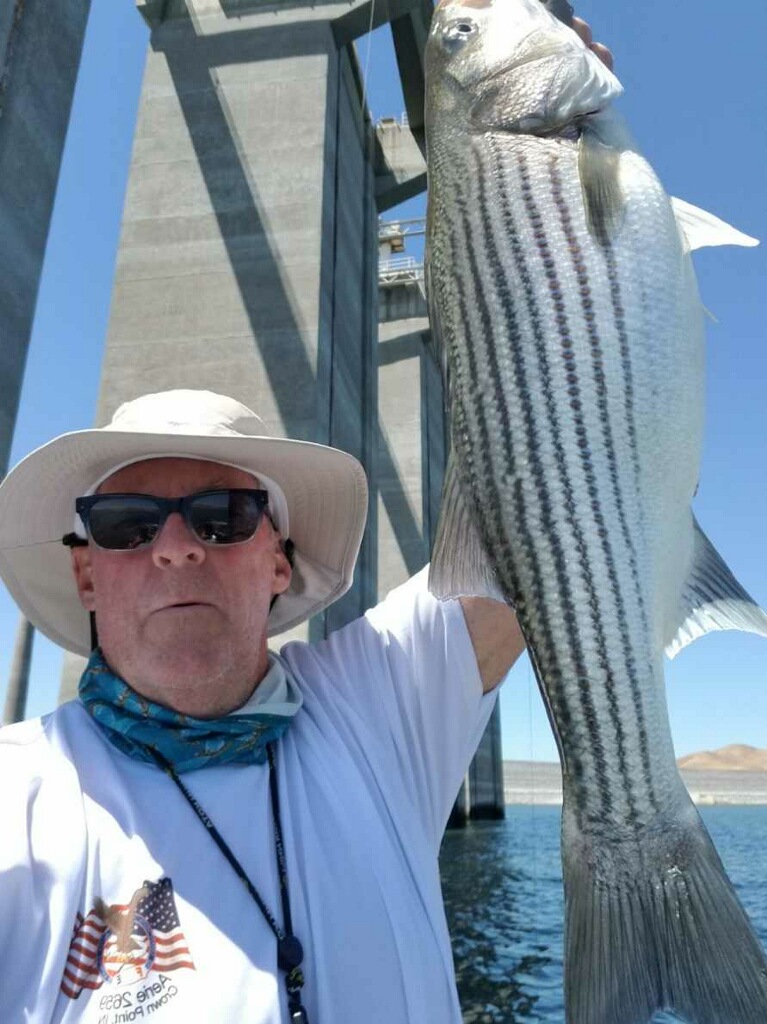 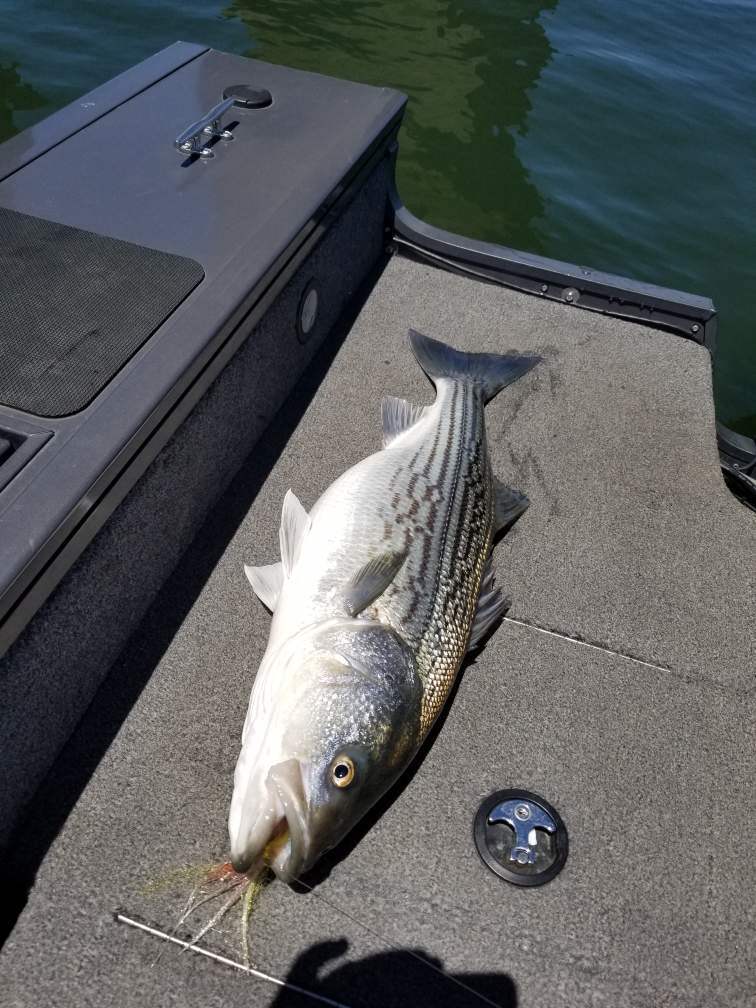 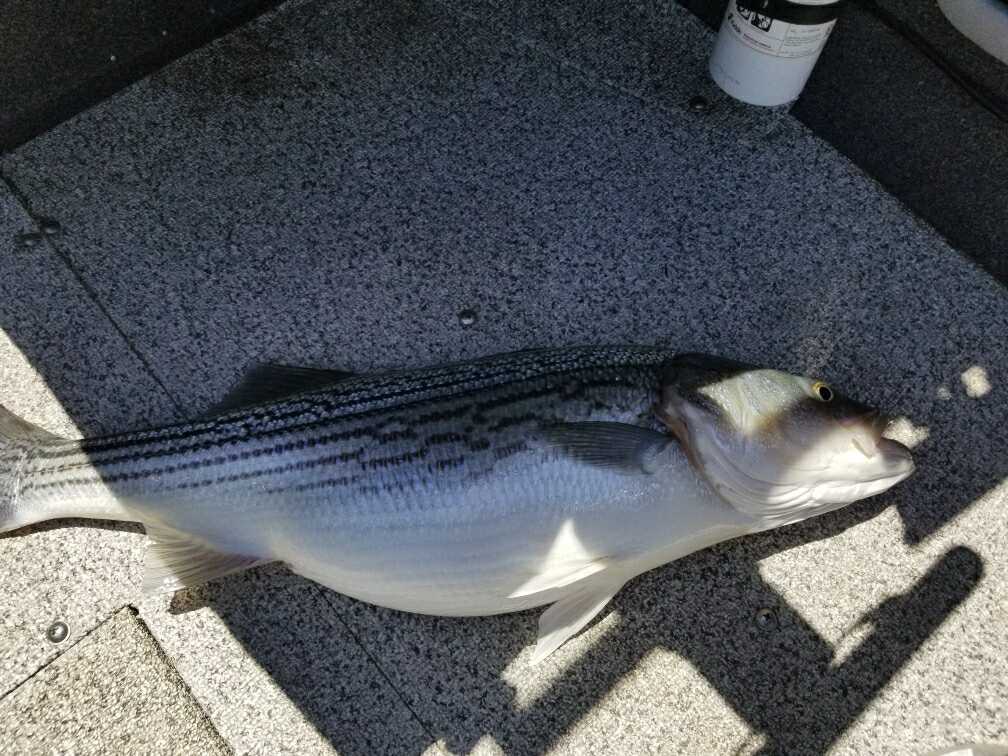 A couple videos from the good old Trench Days in 2015