Monday August 9, 2021 Today was suppose to be the calmest day of my four day weekend but it turned out to be the most windy.  The yellow light was on all day.   I was really looking forward to fishing some calm water with a shot at some topwater but as soon as I crested Pacheco Pass, I could see the whitecaps on the lake. The Forebay Kiosk flags were waving eastward and I figured I would fish  the Rock Wall first since east winds tend to shadow the water off the wall . Some kids were waving an American Flag on the pier – a good omen I thought and wondered what the story was behind that but never got a chance to ask. I started fishing the north most end of the rock wall and metered some fish cruising the weeds. I picked 3 dinks right away but the fish I could tell were not as aggressive as they were last week. I could see plenty of fish and I saw lots of refusals on the Panoptix. I picked up one good fish halfway up the wall and decided to go look for more cooperative fish in the channel.  The wall wasn’t happening as it had for Steph and Eric a couple days ago.

I pulled into the channel with the wind blowing north  about 10 mph.    I decided to drift it along the eastern edge and fish parallel which had worked so well the last couple weeks. Richard Crook was making short work on about 9 fish when I met up with him. I had only picked up a couple on the drift making my total 5 by the time we started chatting. I was about to go search the deeper waters when I decided to try the holes in the weeds. There are a couple pond size holes in green muck and weeds right above the island and sometimes schools of fish get trapped in there with the bait.  It was a good decision.  I picked up two good fish in the holes and one nice sized LMB. The wind was really putting the bite down or so I thought. I mentioned to Richard that the channel might pick up around 1:00 when the solonar peak occurs. I headed over to the trench and drove around looking for some deep water schools of fish with no luck. By noon, the winds had begun to build and I started to look for weed lines that were parallel to the wind.

Windy days can sometimes be very productive. If there are schools of  fish  cruising the deep water, I like to post upwind and cast into the wind on a fast drift. I let line out and point  the panoptix up wind at the fly and drift across the lake till I hook a fish. Then I spot lock and cast downwind. Fishing the wind this way covers lots of water and it’s easy to search for eating fish with minimum casting.

This time of year though, my wind strategy is to post upwind of weedlines, spotlock  and make 100 foot casts downwind right off the edge of the weedline  and strip into the wind. This method keeps the line tight and lets you park on the “striper highway”. My theory is that there are certain lanes the fish move in on the lake and forebay.  . Hard weedlines are a great concentrator of fish as are drop offs and steep walls.   The fish like to move along weed lines to hunt for delta smelt as well which is the primary bait fish in August. I noticed today that the submerged  breakaway weeds were moving downwind as fast as the foam.    Unless the dam is pumping in the afternoon which I doubt,   I think it is a strong  NE wind that  creates current from the channel to the aqueduct and that also triggers fish to line up on the weed edge. I metered fish moving right along the edge of the weed beds everywhere I looked as you can see on the panoptix scan in the video.

The fly that was most effective today was a two inch  size 4 delta smelt clouser tied with craft fur in the Lee Haskin Colors  with a UV red head.   I think I’m going to call it the Syn August Delta Smelt. 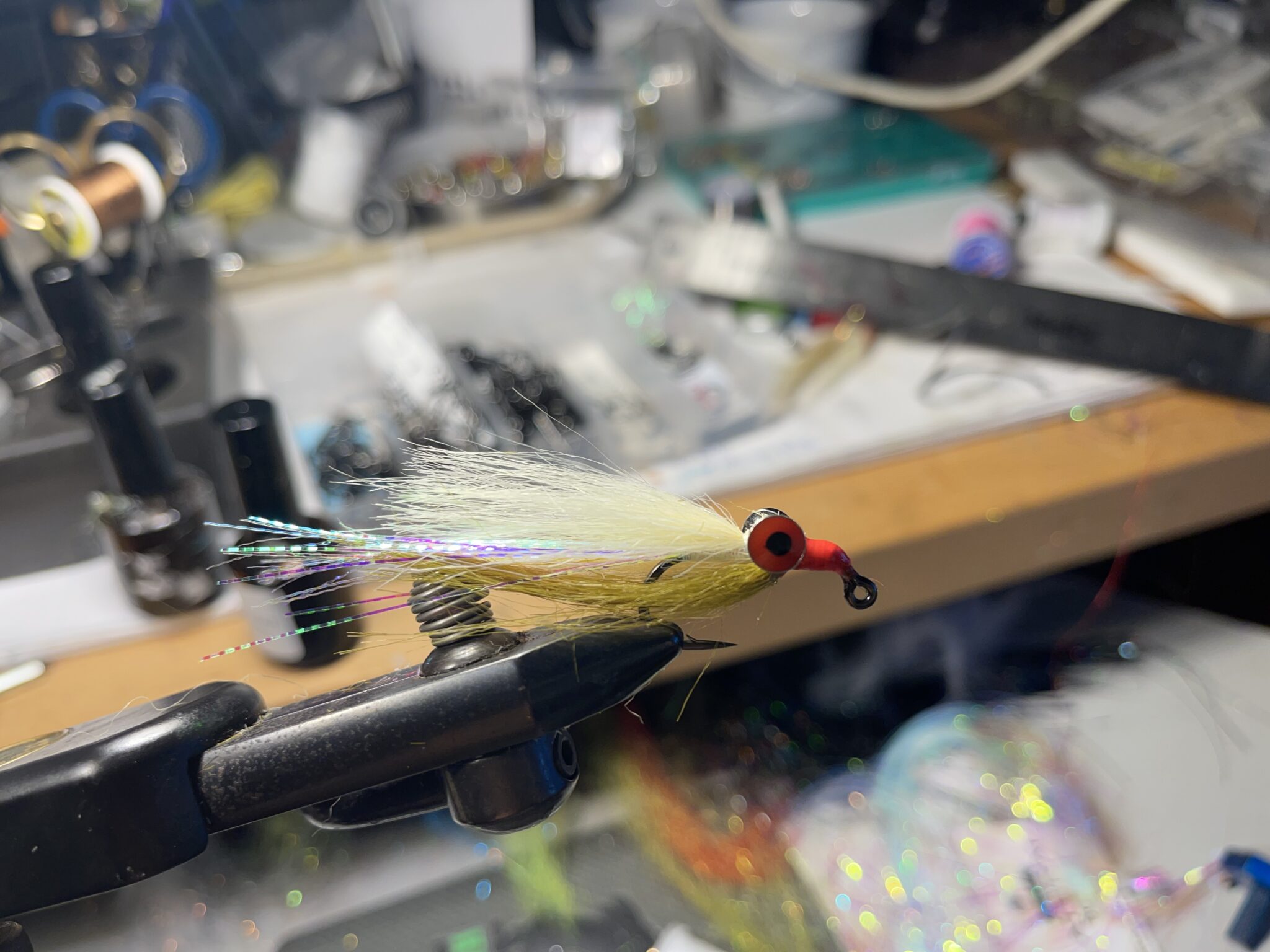 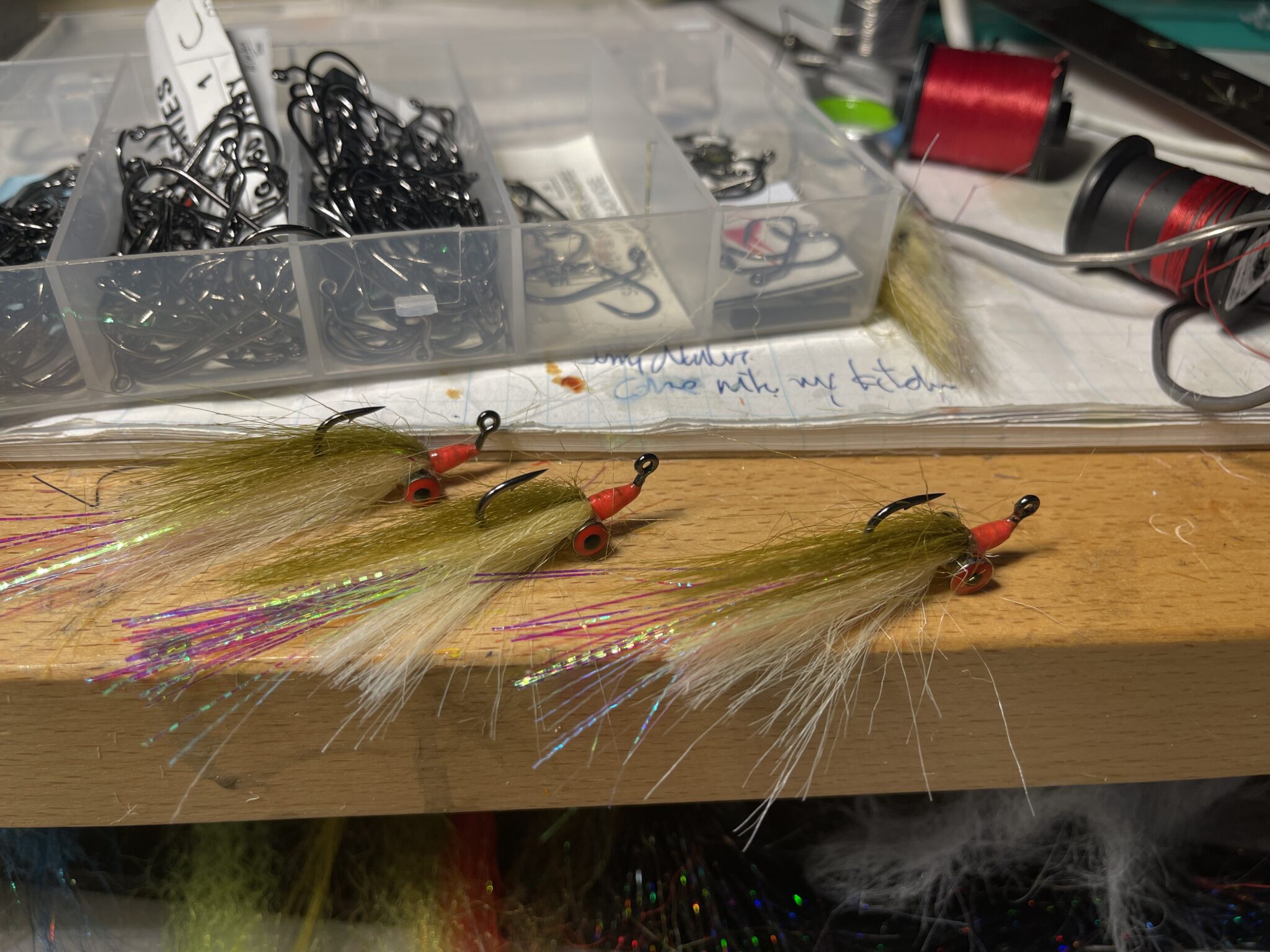 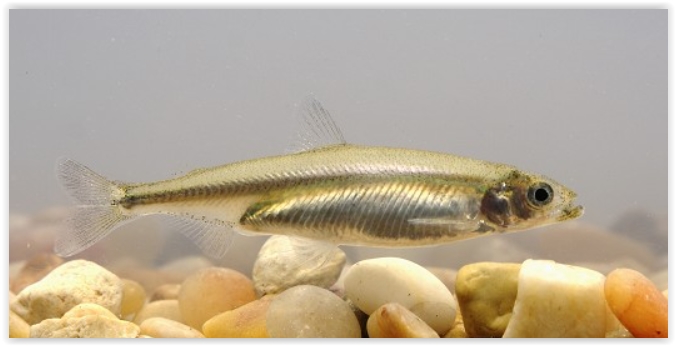 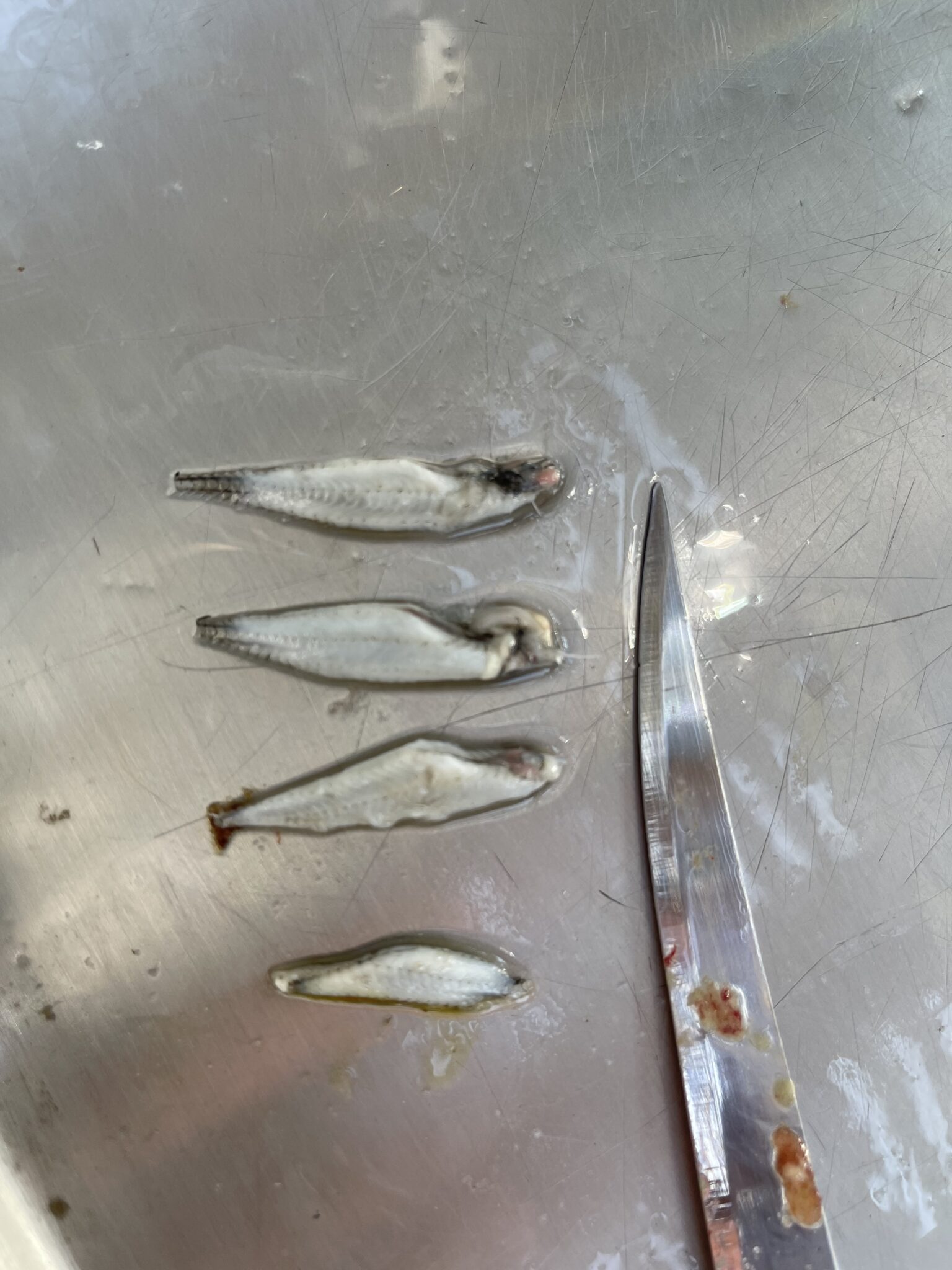 I ended the day with a little over 35 fish which will have to hold me for three weeks till I return. I won’t be able to fish for the next two weeks.  Richard  Crook, the  only  other flyfisherman  on the  lake,  caught  over  20  fish and fished most of the day in the wind.   I have to admire that. because that takes stamina in the wind.   I guess the silver lining about the yellow light is that it keeps the pressure off.   Plus,  it very difficult to fish two anglers from a boat in winds like today because boat position is critical and its impossible to hold without two anchors. 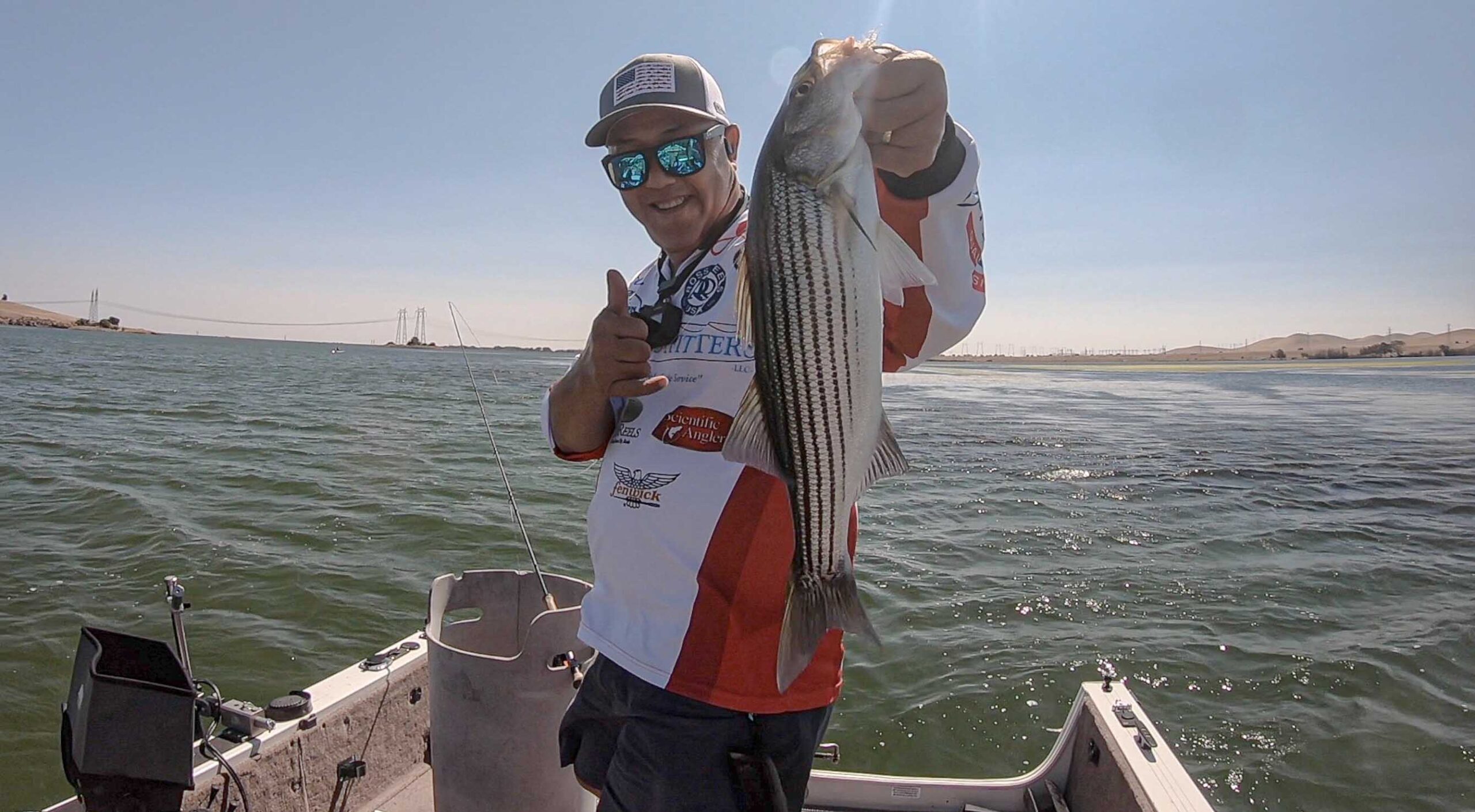 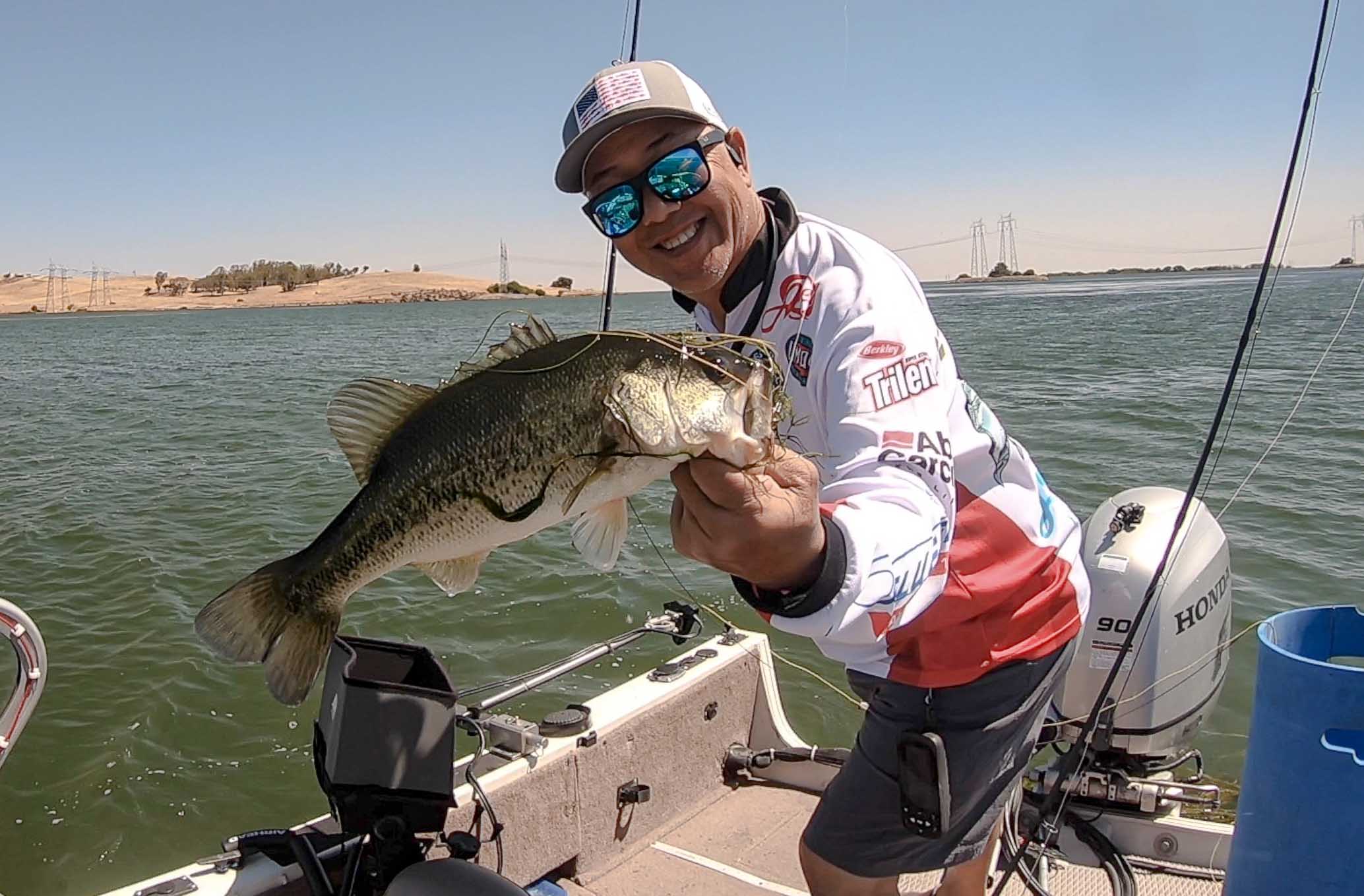 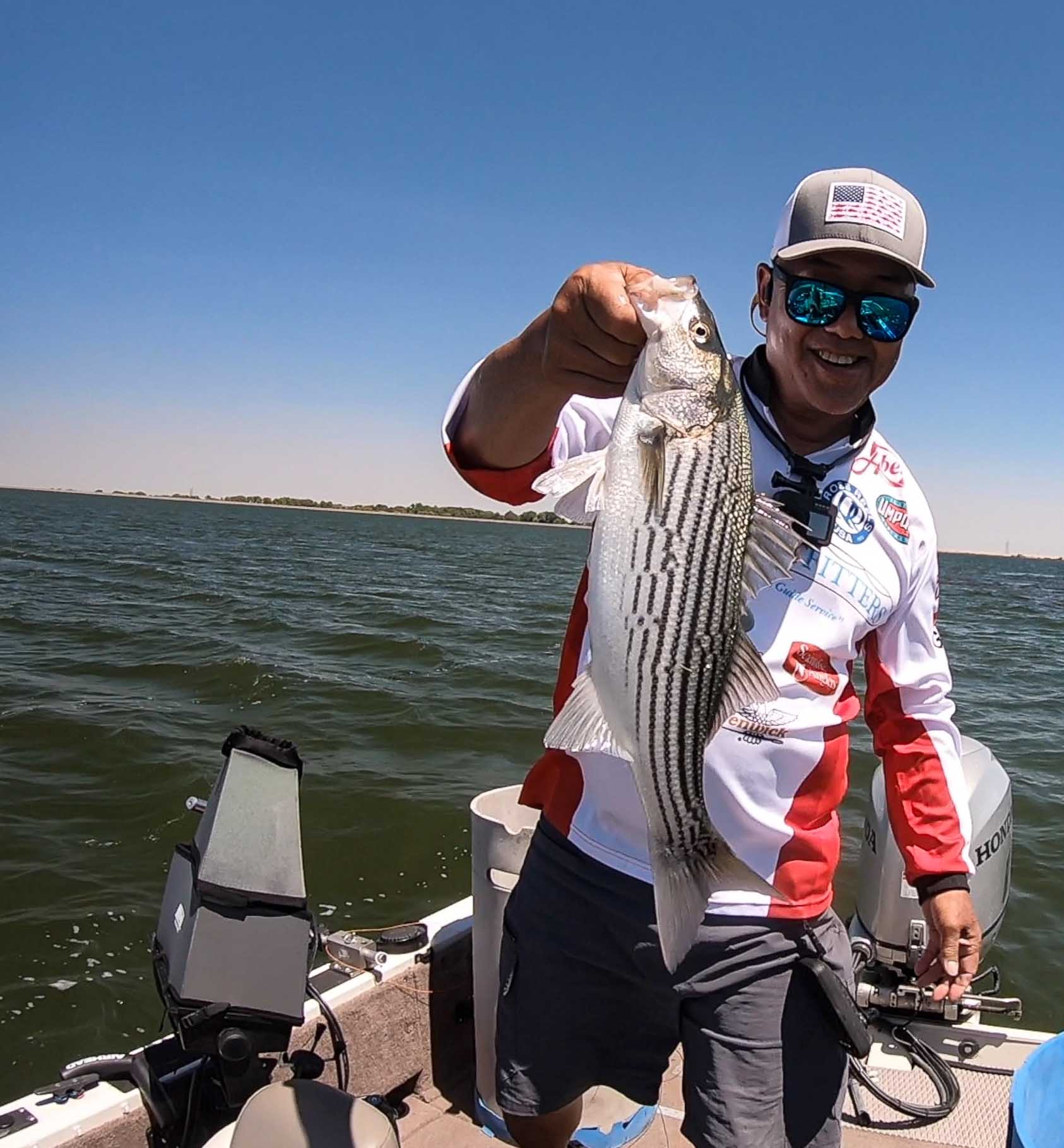 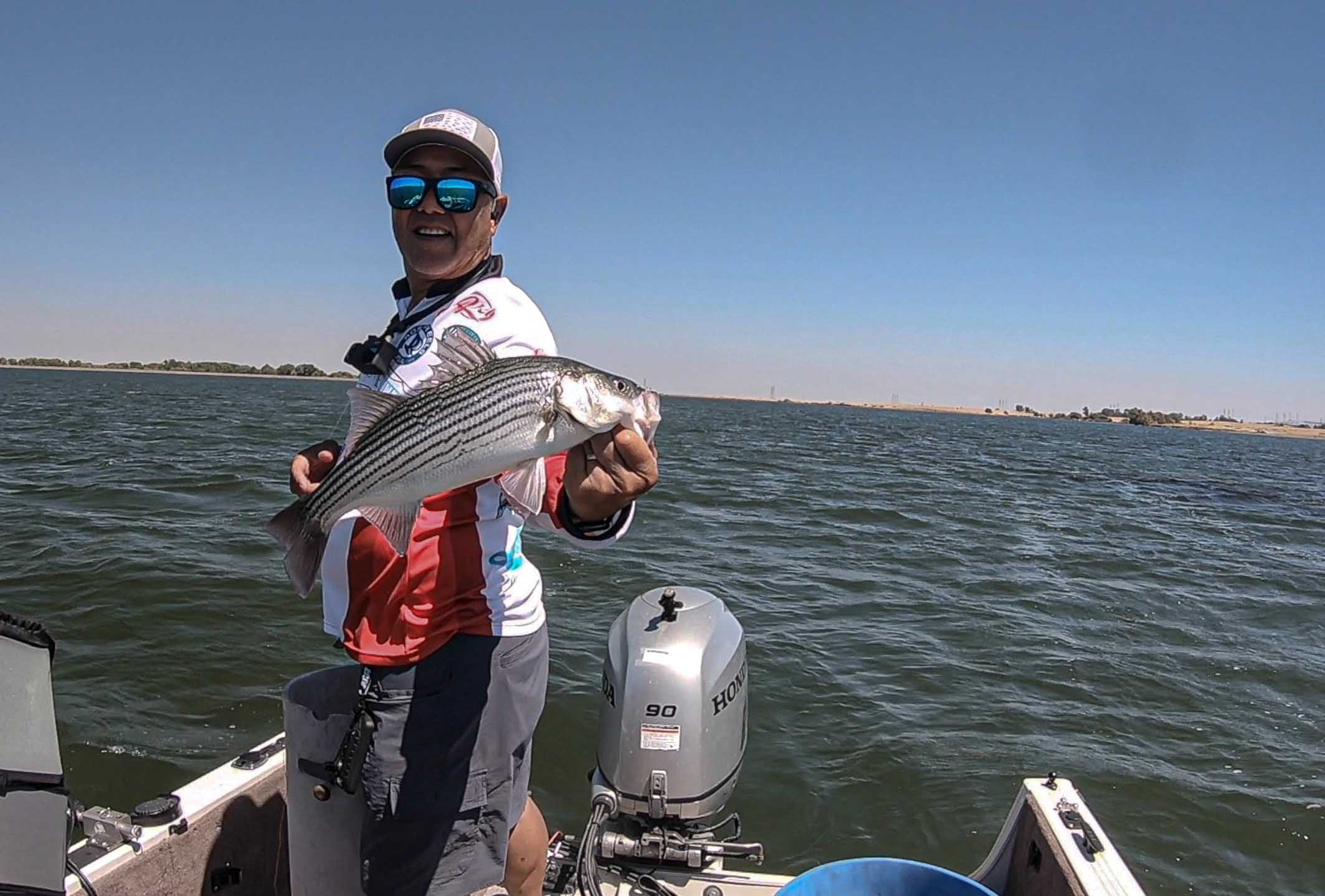 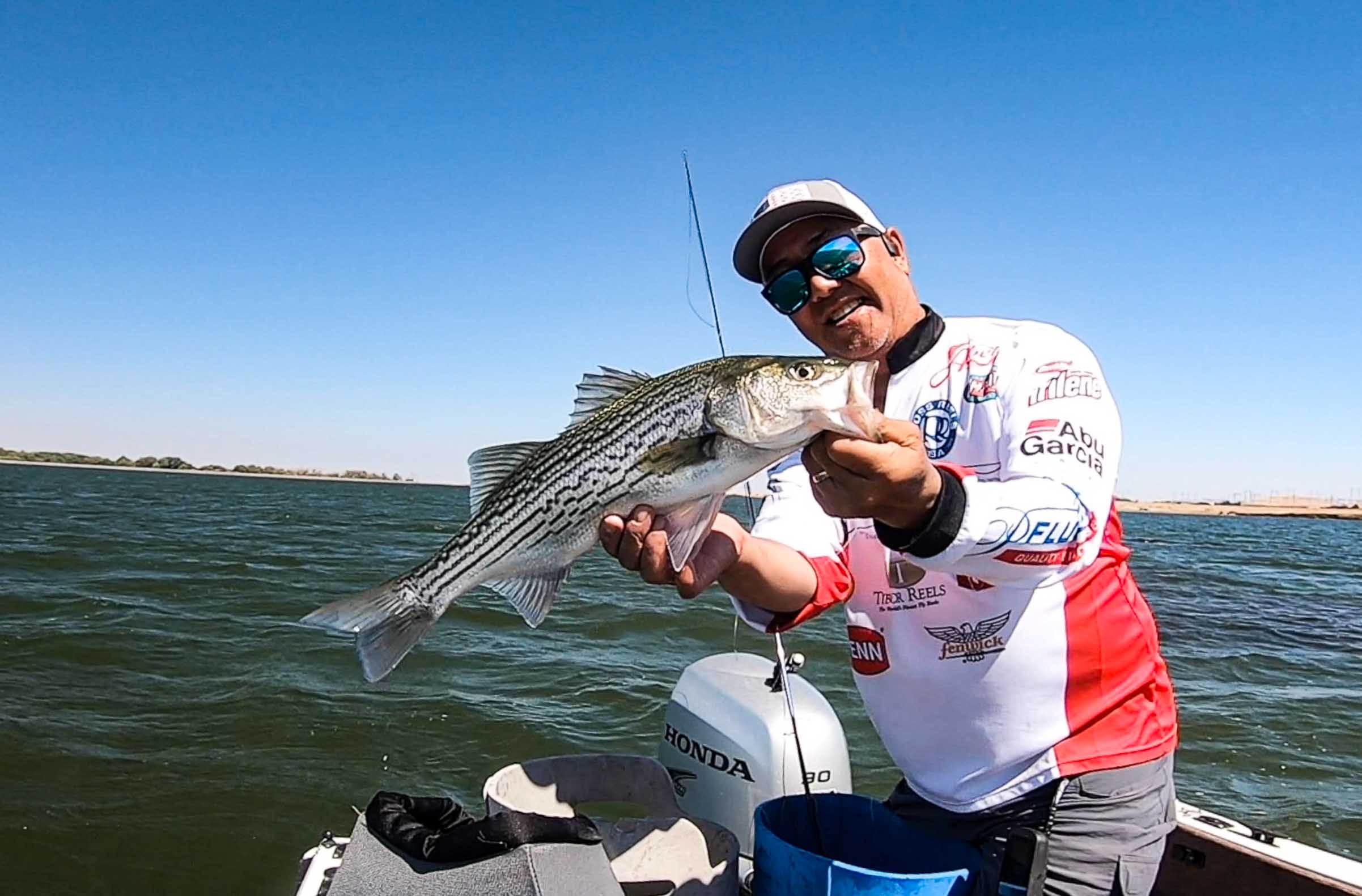 Fish have been super healthy and larger than normal for this time of year with lots of fish over 20 inches. Small flies I think are the best bet.

6 thoughts on “Fishing the Yellow Light”