Sunday October 10, 2021 After taking my dear friend Jerry out last week for a shutout, I felt like the Giants after losing to Dodgers.   I needed a win and I was determined to get Jerry on some Stripers even after scouting the forebay yesterday with mixed results.  I also knew that the “A” team  would be on the water on Sunday.  Vaughn was out with THREE guys in the boat.   Bobby V and Wayman – three Aces.    Steph and Brian were also out as well as Ken Oda in his tube.   I decided to leave a little earlier but ended up at the launch with 35 watercraft  ahead of me at 8:00 am.   Brian and Vaughn were also at the launch at 8:00.  It felt like the starting gun of a Bass Tournament and suddenly I had Outboard Envy and wished I had a faster boat.

I set Jerry up with an Rio OBS with integrated running line.   The newer Rio Outbound Short lines now use an InTouch non stretch intermediate running line.  Last week Jerry had a hard time with Mono and Braided lines feeling the little ticks.  With the intention of keeping him straighter to the fly and having him set on everything,  Jerry came through and quickly got the hang of setting  on the slow soft bites that forebay stripers sometimes slip into.    We picked up three good fish on the wall including a 23 inch Fatty and then set out to the deep water to look for the mother of all schools that I saw yesterday.  Around noon ,  everyone was looking in the middle for the schools of fish and we got on some smaller schools with a few fish here and there.   Nothing like the 20+ i took out of the schools last week with fish hitting the fly on the sink multiple times.   It was more casting into the schools and letting it sit in the middle of the school.

It was amazing to watch three great flyfishermen fly fishing in Vaughn’s boat at the same time, not easy to pull off.   At times Vaughn’s boat, from a distance, looked like a Shrimp Trawler with all the long rods sticking out in different directions.    They really smashed them landing 60 fish  with 15 doubles  and one triple – better than the Giant against LA.   Wayman had the hot stick landing half the fish.   Impressive!  Brian and Steph got a dozen as did Ken .  It was tough to find and stay on the schools.  In the afternoon,  even after finding the schools , catching fish out of them wasn’t a sure thing.  I felt like those early afternoon stripers must have been wearing masks.

Fishing with old close friends is  ways fun.  Just a couple weeks ago,  Jerry and I were screaming and laughing about bears and Coho in Alaska.   The stripers in San Luis are just as fun as the Coho in Alaska  and just an hour from home.   Jerry ,  a retired NASA  engineer\scientist,  approaches a tough fishing day like a science project as I do.  We used the Panoptix Perspective mode Sonar to “hunt” stripers for the entire afternoon while perfecting a method of chasing schools that were 150 feet away from the boat and moving.    I spent the majority of the day looking for schools and positioning the boat for Jerry and not fishing much. which was very enjoyable for me tuning and practicing on the panoptix.   I learned some new things fishing with Jerry about using the Panoptix to search.  There is an optimal range setting to search which has a lot to do with the size of fish you want to see.    I use to just crank it out about 200 feet and grid search with it pointing out 90 degrees to the boat.   I found out yesterday that at ranges beyond 150 feet,  you lose the resolution to actually see smaller schools of fish.  At 120 feet,  I started to see shadows of schools  that,  when I finally caught up to them, turned out to be pretty large schools (30-50 fish)  that I would have missed at resolutions out past 120 feet.   A trick is to get them within 80 feet and  adjust the range from 120 to 80 to fill the screen with the school.  Only then you can really see what is in the school of fish.  Locating a school 100+ feet from the boat is not a fishable situation and often times large schools are largely moving under the cone of the beam and show up as merely  shadows or intermittent blurs. we were often rewarded chasing down blurs and getting them with in 80 feet.  The next challenge once a school is located over 100 feet away is to get to the school and place the boat within casting range of where the school is moving.   That sounds easy but picking a spot out on the water and motoring to it , then turning the boat at a right angle to the moving schools while losing visual contact with  the school on the scope which is point at a right angle to the boat  is tricky.  Jerry and I figured out a good system to get the boat in position faster.   Jerry would cast to the spot that I needed to put the boat at.   It was much easier to look at where a  fly landed and move the boat there than  to eyeball and guess a spot on the horizon or a spot on the water.   Better yet,  A spinning rod with a float or bobber  cast to the spot you need to put your boat based on the sonar would be more accurate.   It takes 40 seconds to move the boat 100 feet  and turn it 90 degrees.   Depending on the direction and speed of the school,  its better to be able to cast a visual marker to a spot you need to get the boat to especially if you are trying to lead the fish.

When we lost them on them on the finder, I’d jog around for a bit to see if I could find them again. If that didn’t work, I’d start the big motor and idle around in a circle ‘till I found them again. I put up a waypoint on every big school of fish I found. This created a “zone” of waypoints on the chart. If I couldn’t find a school idling in a circle, I’d idle into the zone and start circling again till I found ‘em. Sometimes I’d just idle through the area where the last fish was hooked and, voila! there is the school! Big fun. We put the boat on the trailer at 6:20 pm. Long day.

Jerry and I had a great time reminiscing our many trips all over the world together.   he graciously made his specialty Garlic Crusted Cross Cut Ribs for lunch that were fantastic.  I was worried about the pressure at San Luis making a tougher day and I have to say,  we never felt pushed out of a good spot.  We even returned to areas that we did poorly in the morning to find eating fish.   I think the stripers move around the lake and eventually everyone has a shot at some good fishing.  Ken Oda texted me that the guys fishing the islands out of tubes did really well also and we never fished the channel or islands.  There are lots of fish and areas to fish to go around for everyone, even with 40 boats on the water.  Don’t let the weekends of holidays scare you off.  There is always someplace without fishermen on the forebay where you can fish away alone  and catch fish.  We got off the lake around 6:00 but there was a huge accident on 101 that closed three lanes of traffic.  Even detouring  to Monterey Highway,  we got home late at 8:30.  It was a long day but a fun and memorable one despite. 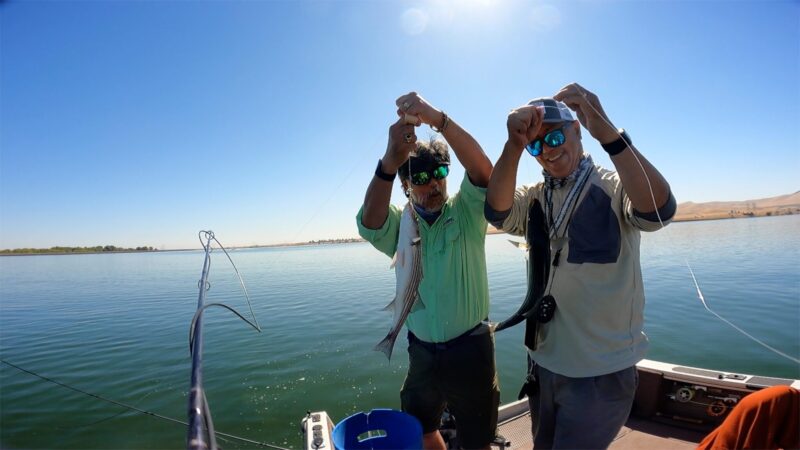 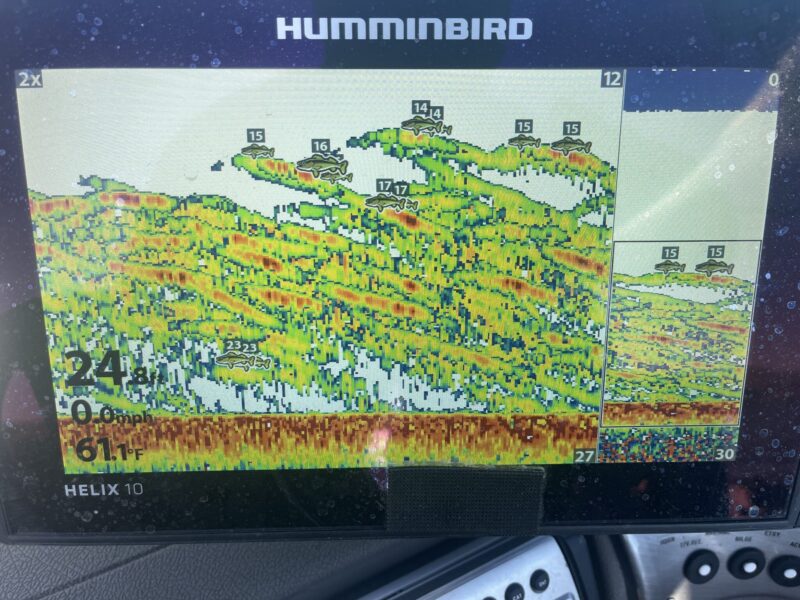 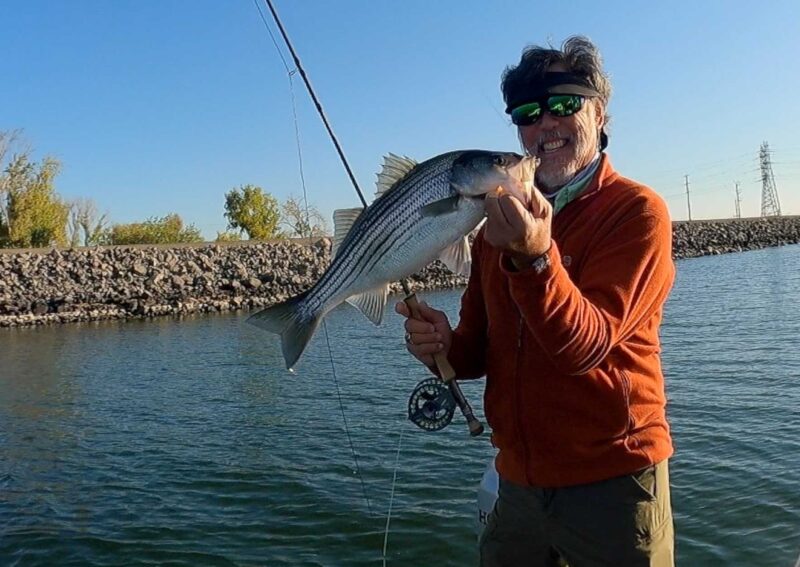 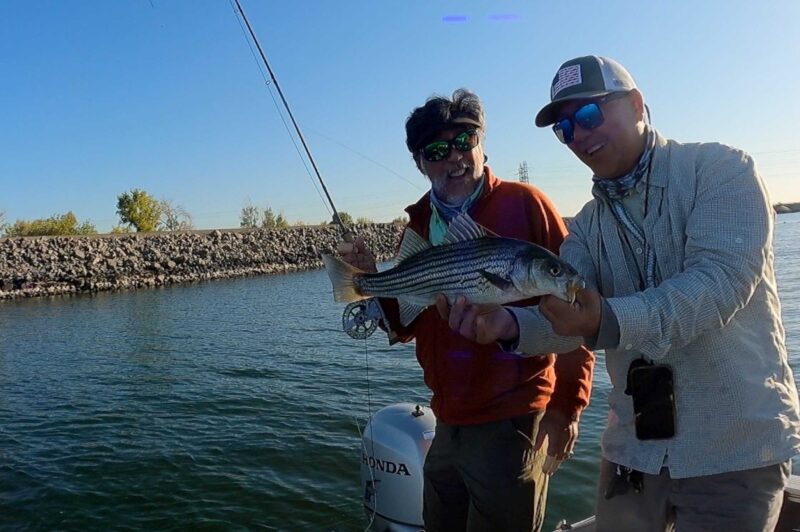 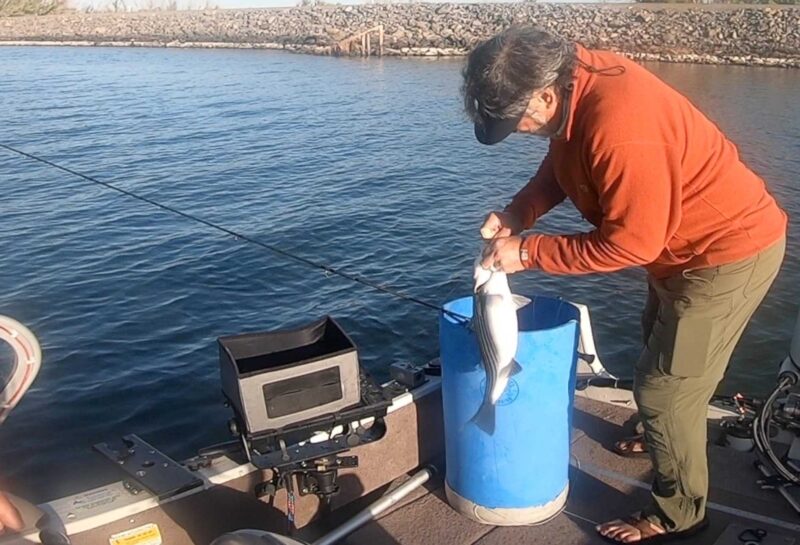 One thought on “Jerry and I find Redemption on the Forebay”