Saturday Oct 8, 2021 – My high expectations for today was met with a minimum wage day.   I landed 22 but it was tough fishing today.    I found the big schools in the middle again but they were tough to stay on.  I got three on the wall in the morning during the solonar hour and I picked 5 up from the big school in the early afternoon in as many casts but then the afternoon got really slow with an average of 2 fish an hour.  Today was mainly a scouting trip hoping to find out where the fish were to put Jerry on them tomorrow.    I started out at the wall where the fatties live.  Steph and Eric were already in there and had already exercised 15 fish out of the corner.   I went in at 9:00 and had a hard time getting them to eat.   By 9:30 Steph and Eric headed to the deep water to search for the schools.  I decided to stay and fish the wall through the solonar peak at 10:30 at which time I picked up three nice fish .   I headed to the deep water to search for the “mother of all schools”  that I found last Monday.

It took awhile but I finally found that large school from last week.  Like last week,  I found an area with lots of small schools and eventually the big one came to me.    I texted Eric and Steph who promptly got a half dozen fish out of the school.  As I pointed to where they were with the panoptix.    When the fishing slowed down,  I swapped a lot of flies trying to find something.  I ended up using a small size 2 craft fur  yellow brown cream clouser with gold flash without a pulse disk.  The fish seemed to be hitting very  slow moving flies and  long pauses.   Maybe the pulse disc was too “busy” for them.   I wonder what turns on the “reaction” bite?

Ken Oda got a dozen out of his Tube fishing the shallows on the west side.   The trench and powerhouse were empty but I did find a couple at the last east White Buoy.

I spent hours just looking at dead water searching for that big school,   casting to smaller schools occasionally converting on one.  It was tough..  Mark Won and Ken Oda were in tubes on the west shallows and also had a tough day as well..

Hopefully we will do better tomorrow. 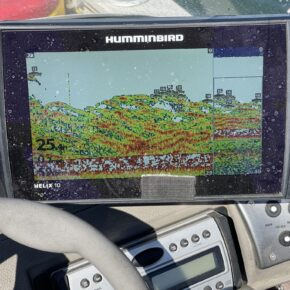 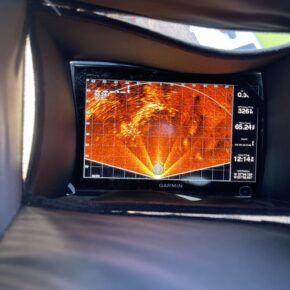 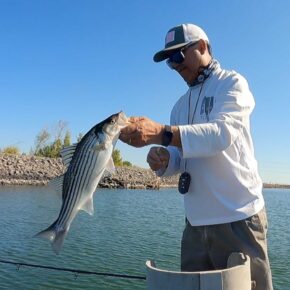 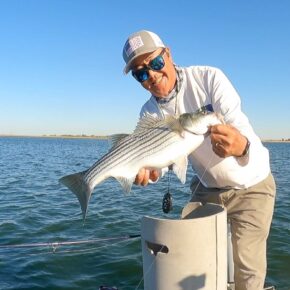 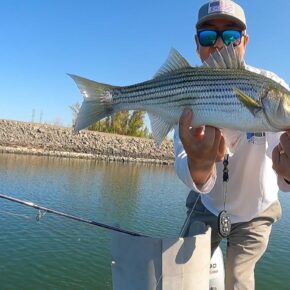 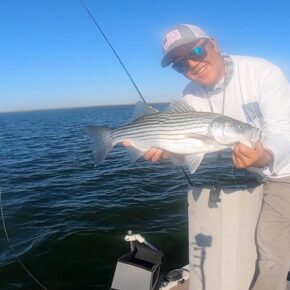