Monday October 4, 2021 I set out fishing this morning with low expectations. Two days ago,  I had high expectations taking Jerry out for the first time.   I don’t like taking people out unless I have high expectations especially with friends that don’t fish every week.   I’m use to bad days but when I take someone,  I have a hard time dealing with failure to deliver.   I suppose that’s why I never aspired to be a guide.  That is also why I sympathize with guides .   I like to think I’m a good client since I  don’t really define a good day of fishing strictly by the numbers.   I’ve also had days when everything happened in one hour of a long day of trying.   Sometimes the difference between a slow and great day is when you quit.  Mark Won did well in the last hour of fishing last Friday when we only got a couple fish all day.  It was so good in the gray light of evening that  Mark went back the next evening and did great again texting me last night –

FYI – the bass bite was extremely slow during the day. Kenny picked up a few earlier in the morning. Fish were all deep & hugging bottom before eventually coming up shortly before sundown. Initially spongy eats but then it really turned on around graylight. Not as much topwater activity as Friday but the grabs were high up in the water column. Broke off a nice biggun at the boat because of a wind knot😫

Steph last week said he had a stellar day fishing  large schools of stripers in the middle of the lake that I couldn’t find on Friday after searching for hours.   My last two trips were gradually getting less productive and I was pretty sure today would be a searching day.    I decided to make sure I was at the end of the Medrious Rock Wall during the Solonar peak at 9:30 am.  The fish were working the weedline early in the morning  through the Solonar peak.  I actually managed to catch 15 fish by 10am most on the slow strip after a 10 count.   The fish were on the bottom and they were not rushing the fly.  It felt like a winter bite with the fish hitting on slow strips and long pauses.   These last couple weeks I have noticed the fish at the end of the  Medrious Rock wall are on average larger and fatter than those in the main body of the lake.  I’m not sure why.   From after 10 AM,  the fishing turned off and the fish left the area.   With a couple Fatties and 15 fish total at 10:00 am,  I was content to quit and started heading back to the ramp.   I figured the fishing would probably be as good as it was going to get around the 9:30 Solonar and that I would come home early after a fishless couple hours.   I turned my Panoptix on and headed for the dock with my trolling motor hoping to find a school of fish to work as I motored back on battery trolling motor across the forebay.     About halfway back to the ramp,  I spotted a school of 3 fish and decided to give them a shot.   As I was fishing for the triplet,  a Gigantic school of stripers  moved into view on the scope.   It was the kind of school that blacks out the screen.   I nervously cast to the school and got hit on the first strip.   I could see the school split in two as I stripped the fish in from the middle of the school,  but the two schools stuck around .   I got of another cast as fast as I could and picked up 3 more.   After the 3rd fish,  the school was gone from the scope and I  circled to find it again.   I dialed the Panoptix out  120 feet  and  did the Grid Dance till I found them again.  I ended up getting 22 out of the schools in the middle.   It was tons of fun chasing fish out in the middle and picking them off with the Panoptix.   It reminded me of Clay Pigeon shooting.   I ended the day at 3:00pm  with 37 fish and left with the fish still biting.

I finally met Rod -a retired school teacher who has Fly Fished the forebay and lake for a little over 20 years.   He fishes out of a tricked out 40 year old 16 foot Boston Whaler and I remember  watching him on the lake last May just pounding them on the Trash Racks when nobody else was catching.   It’s always interesting to meet a local fly fishermen that fishes  in completely different friend circles.  Especially to discover that techniques, gear and flies are very similar.   The only common friend we had was Dan Blanton and he mentioned twice that they are the same age.   Dan is like the Kevin Bacon in Fly Fishing Circles.    We talked about how difficult it was to find the big schools in the middle and I got to see his flies.     I was told by others that he fishes old style Bucktail Clousers but he told me he doesn’t fish Clousers unless the fish are picky.    His favorite fly is very  similar to a Henry Cohen   “Something else”  and when he does use a Clouser,  its on a very small hook – size 2.   Also his flies are tied with Synthetics and not bucktail.   He described a huge fish (potential world record)  he lost in the main lake that towed him 400 yards and bent a Tiemco heavy hook .    Rod has caught several fish in the main lake in the 40lb range and many in the 20s on small flies.     I noticed that he was also fishing the middle of the forebay but further down the lake.   He found fish but not in the numbers that were on the east side .

I don’t think I would have found the big schools in the middle if I didn’t use the Panoptix to search.   Setting it on to a range of 120 ft to the side and setting the down sonar to sidescan gives me 40 to one side and 120 to the other – 160 ft search beam. Once a school is located to the side,  I change the perspective mode to forward and try to put the school in casting range and 90 degrees to boat.   I noticed that the schools would break in half if I hooked a fish in the middle of them and like in the winter,  The school will follow a hooked fish to the boat and sit under the boat.  When I found the biggest school ,   there was nothing showing on the downscan 2d until I landed the fish.  The schools almost always follow the fish in and sit under the boat for awhile. 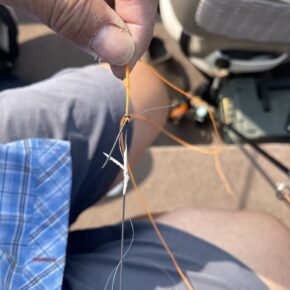 day I had a factory bonded loop on a Rio Outbound Short Shooting head fail.   I tried a quick repair trying to put a nail knot on it so I could continue fishing but failed .   I know many guides that don’t trust those loops and  just wore out casting it.   I am replacing  the loop with a braided one.    Also my experiment to attach a braided loop to 80 lb mono failed.    I am going to try roughening up the surface of the mono with sandpaper and tying a series of bonded nail knots on the mono with tying thread  before slipping the braided loop over it to see if I can get more bite on the mono.   I  used the 50 lb ProSpec running line and I have concluded that despite the minimal memory of the shooting line,  It still has some  whereas braid has absolutely no coil.  The ProSpec casts a bit further and is slicker but the braid when fished in still water is much more sensitive (less stretch) and fishes straighter to the fly which makes it superior when the fish are hitting slow moving or still flies.   Sometimes its the smallest tick of the line that you feel .   Set on everything,  including a change in the feel of the pulse disc.

Never have I experienced such a contrast in catching stripers in the forebay as I have had in the last three days.   From Zero to Hero in three days.  Sometimes fishermen get rewarded for low expectations.  Schools (of fish) are in session on the Forebay –  no vaccine needed. 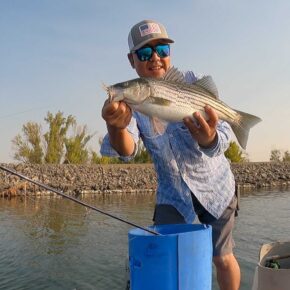 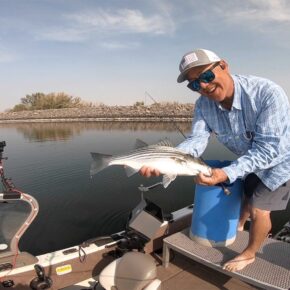 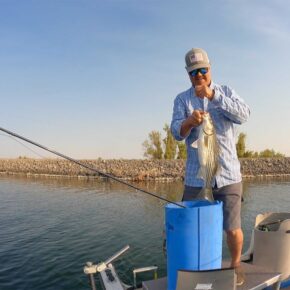 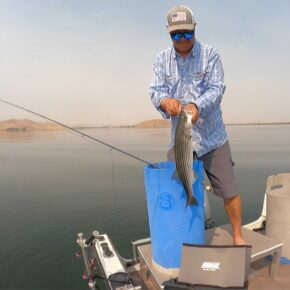 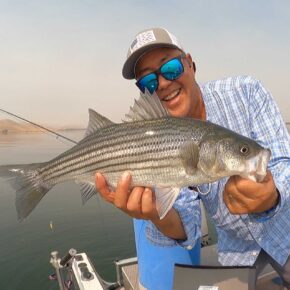