Monday November 4, 2021 – Every time I decide to fish the Forebay,  there is a split second while driving over the pass,  when I get that first view of the East side of the lake of Romero to the Bay of Pigs, that there is an urge to blow off the forebay and head for Basalt Launch.   Starting February 2022,  it all changes when the lake closes for 7-10 years to boats.  I decided to fish the Lake even though reports were not encouraging.  A couple more times for old time sake, till the day the music dies…

I launched at Basalt around 8:00–the third boat out.   The launch was in great shape  even though there is no pavement at the low water launch.    The launch was firm with no silt or mud.   The lake still has some algae in it and the visibility is about 15 feet.   I headed directly to the Trash Racks to discover that the pumps were on.   I could see the upwelling of the pumps about 500 feet in front of the racks. ,    A couple trollers were fishing through the upwelling back and forth and I kept an eye on them .  They weren’t catching fish.   This morning driving in, there were a couple fly guys in tubes in the channel of the forebay but there were non on the lake. .   I started the day hooking two fish right away fishing between the racks (flossing the racks) .   By 10:00 am,  the Dam police moved in and persuaded me to move out.    I moved out to the upwelling created by the pumps and marked some huge schools of fish I suspect are American Shad.     There were some smaller schools around the shad that I am sure were stripers but fishing the deep water through these schools still did not result in any hookups.    They may have been moving too fast to get a fly in front of them at 40 feet.    The fish were tight lipped and not aggressive in the deep.   I was a bit surprised that the DWR was still patrolling the racks.     I guess the Dam monitor also knows he’s losing his job as soon they close the lake in February and is getting as many hours in as he can.   I knew he would eventually leave and I would have a good long session at the racks later in the day so I decided to try some other places on the lake.

I went down to the bay of Pigs and fished the shallows and the rocks  with not a single bite.    I didn’t meter any big schools in BOP.   I suspect they are all balled up together in a super school off the trash racks in 100 feet of water.   I finally went back to the racks around 1:00 after the DP left and started catching fish casting right along the edges of the wall of the trash racks.   I could see them with the panoptix close  along the walls and stationary.   I’ve always believed that Stripers  like to hug the wall because it’s easier to run down minnows if you take one dimension out of play.  Plus  bait is easier to see contrasted against the white wall wall of the racks.   I managed to catch  a half dozen fish when my casts were stripped within three feet of the wall.   Casting further out from the wall was pretty unproductive.   I got more hits when my fly was right along a wall or grate.   Maybe those fish were feeding vs the ones out further.   It was a very slow day but then I seem to remember it getting this way in the fall.   A good day in the winter is half a dozen fish and all the fish today were long and skinny but fought well.    I wonder what will become of them when the lake stays this low for ten years.   I think without the influx of water,  the ecosystem will suffer and the food chain will shrink.    I’m sure they will survive but will they thrive is the question.

I pulled the boat up close to the exposed grates expecting to see some of my old flys snagged on the base,   but then I recalled that these bases are normally over 50 feet  deep most of the time and that I don’t really fish that deep much.   I spent some time  just studying the racks.   I’ve only seen them close one time before in the last drought.   It was easy to imagine the thousands of stripers I’ve caught around this structure.  I could imagine the ghosts of a thousand stripers hooked on my fly ,  above my head as I reminisced fishing each water line on the tall racks that extended hundreds of feet above my head like rings of a tree.  I  felt the corner of the grates that cut so many of my leaders as huge fish used them to escape.   Also ,  looking around at the contours of rocks piles and ledges now high and dry,  I could see why these spots in the past were so productive.    An  hour of observation and notes could lead a lifetime of better luck when the lake resumes its typical depth that is if I ever get to fish it again like that in my lifetime.     The Trash racks will always be a pretty special place in my fishing memories.

February is three months away.   plenty of time to say goodbye.   Maybe they will be convinced to leave the lake open during construction,  but even if they do,  the low level of the lake will definitely change it for the worse in the next 7 years. 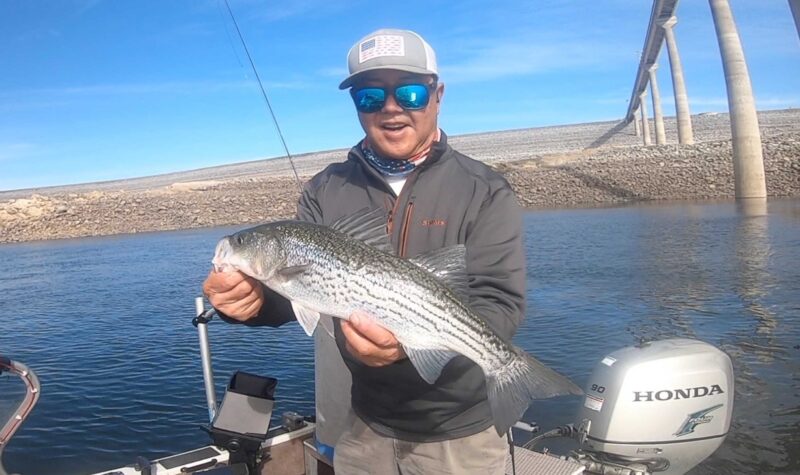 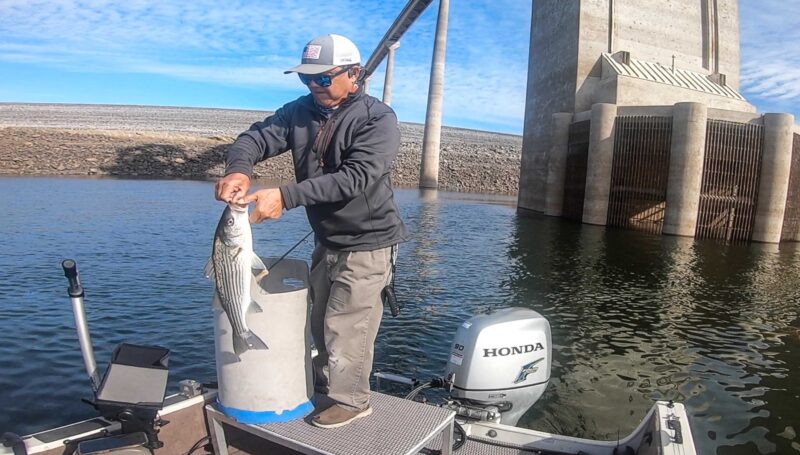 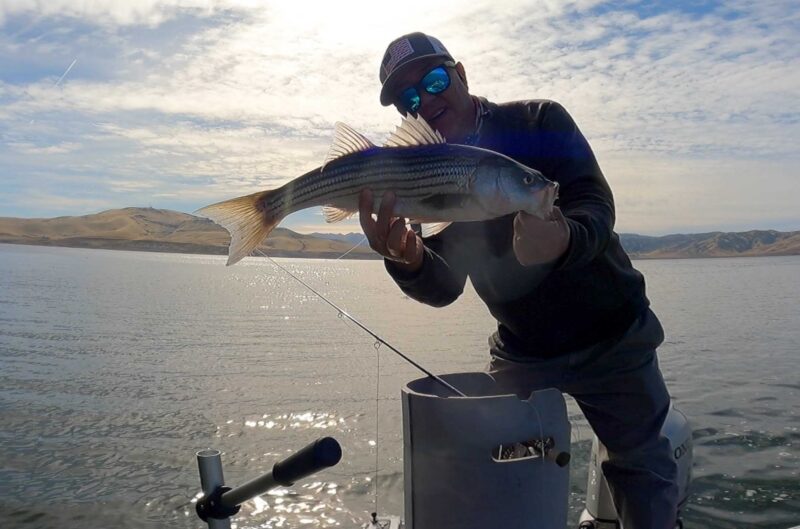 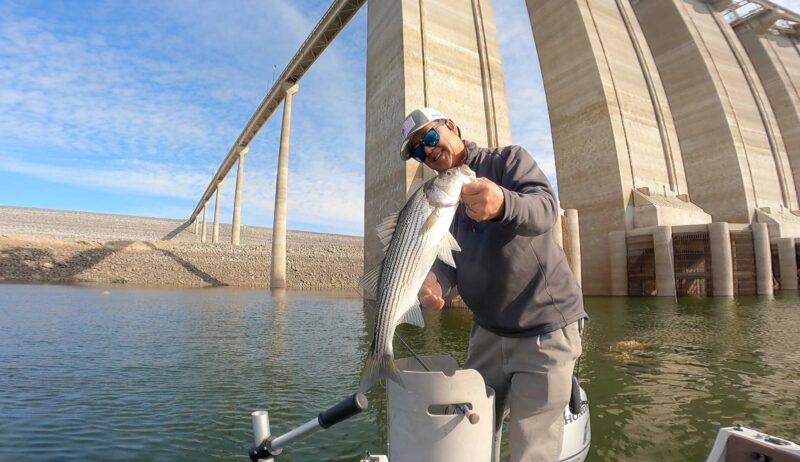 5 thoughts on “The Long Farewell to San Luis Reservoir”