May 10, 2022 – The Normandy American Cemetery and Memorial is a World War II cemetery in Colleville-sur-Mer, Normandy, France, that honors American troops who died in Europe during World War II.  Gina and I had planned a tour of Normandy to follow Gina’s Dad’s Battalion History through France for several years now.  We wanted to stand on the sands of Easy Red at low tide and look to the German Fortified Dunes that Nick saw as he hit the beach in  the first wave off troops  on D-Day.   We got our chance three weeks ago. 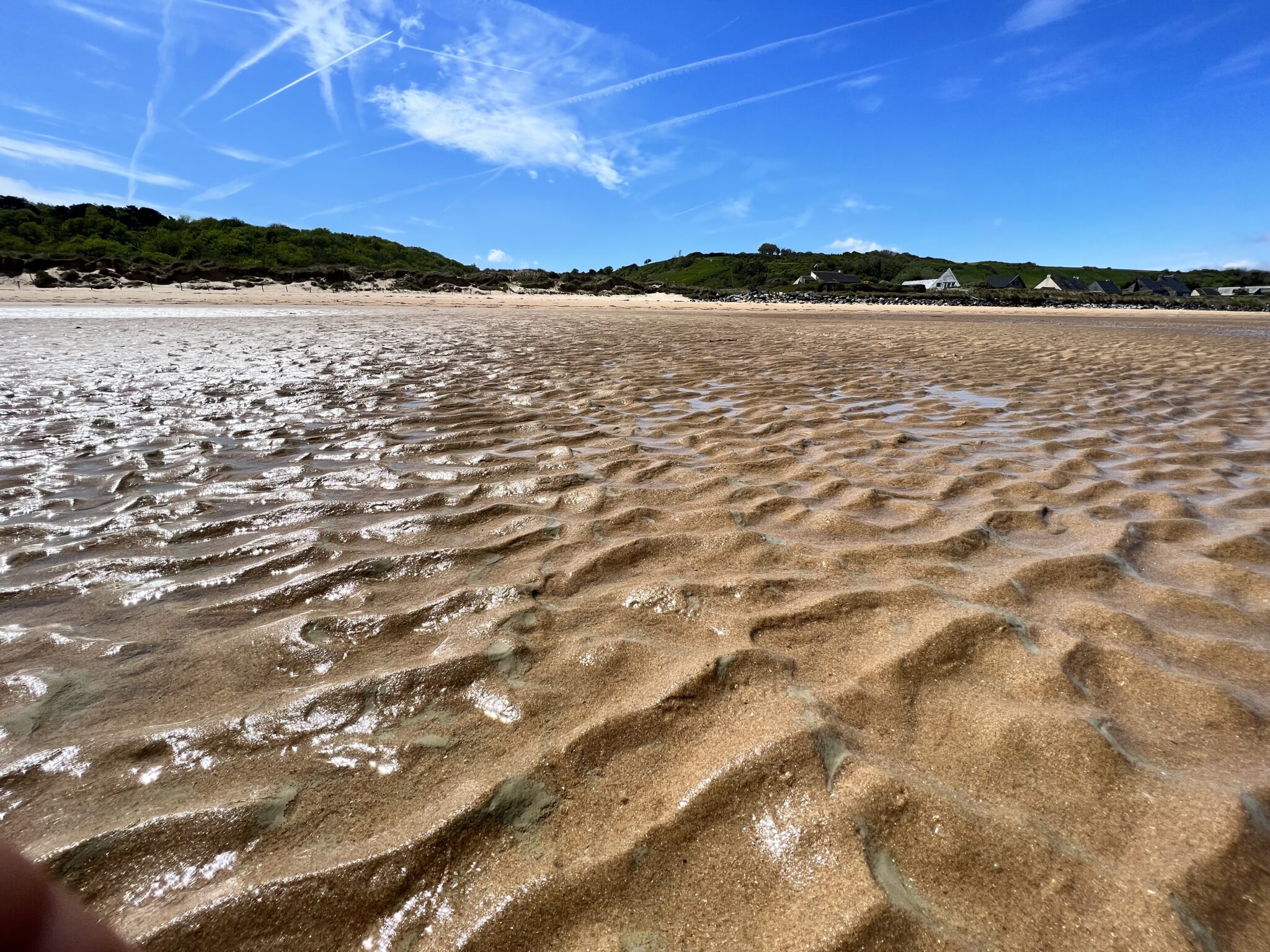 As part of our personal  tour,  we visited the the Normandy American Cemetery in Colleville-sur-Mer.  Nick was one of 17 Combat Engineers that was attached to 29th Infantry Division.  In all the years that Nick was alive, we never were able to find any surviving members of the 1340 engineering battalion that landed on D-Day.  There were only 17 on Omaha Beach that morning.   Our tour historian and guide, John Fletcher, surprised us by tracking down a member of Nick’s Combat engineers that died on the beach  on D Day and is still buried in the Colleville-sur- Mer cemetery.  Not much is written or memorialized about the 1340 Combat Engineers who were deployed to clear away beach obstacles ,  build bridges and roundabouts to facilitate troop movement inland,   but unlike the infantry,   they left their legacy in those structures that they built that exists to this day and were critical to the invasion.  The only mention of the 1340 is on a single plaque.  Nick talked about using Bangalore torpedos,  as they were pinned down on the beach near a German defensive installation,  to create breaches in the numerous barbed wire networks set up by the Germans 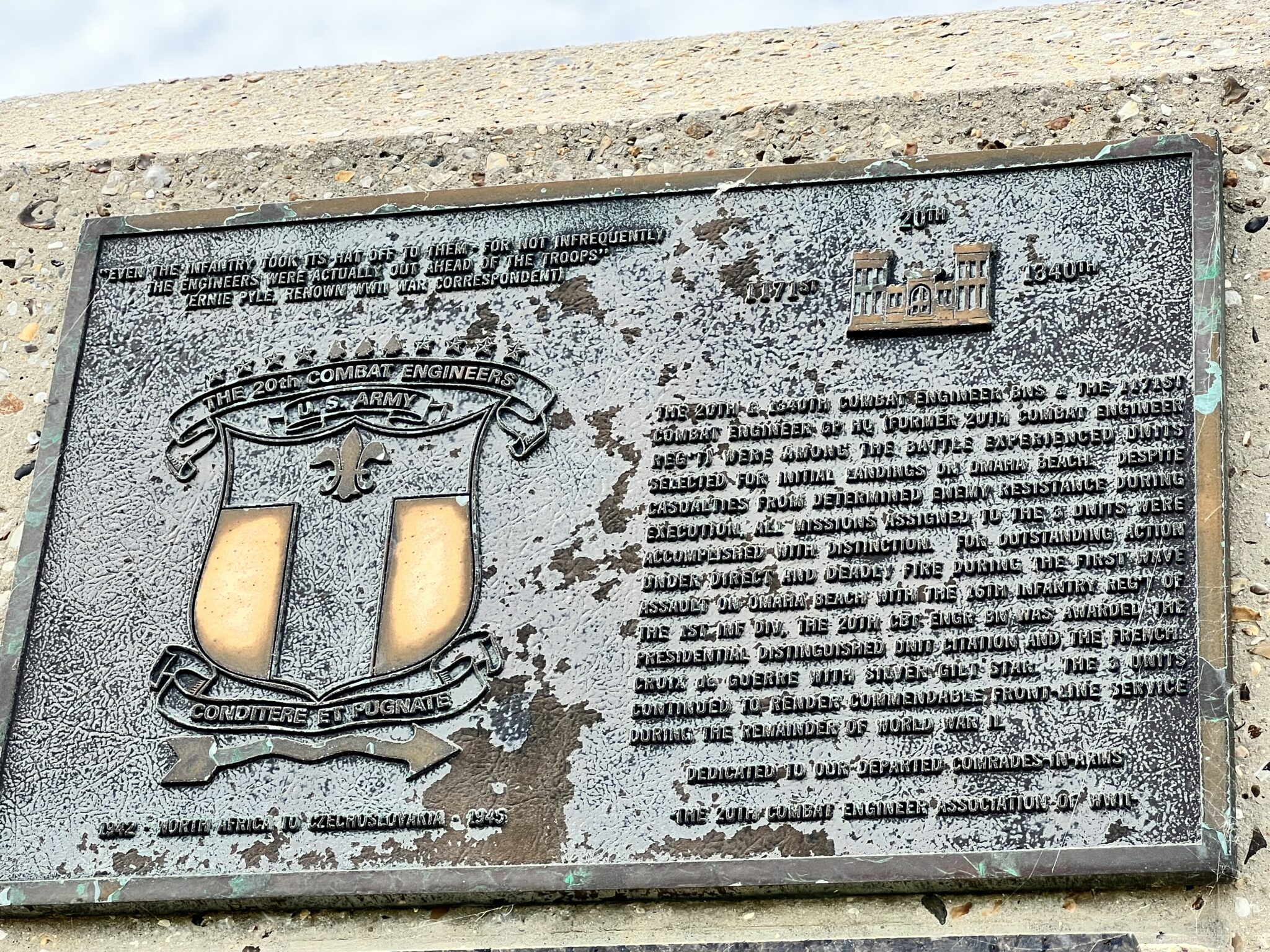 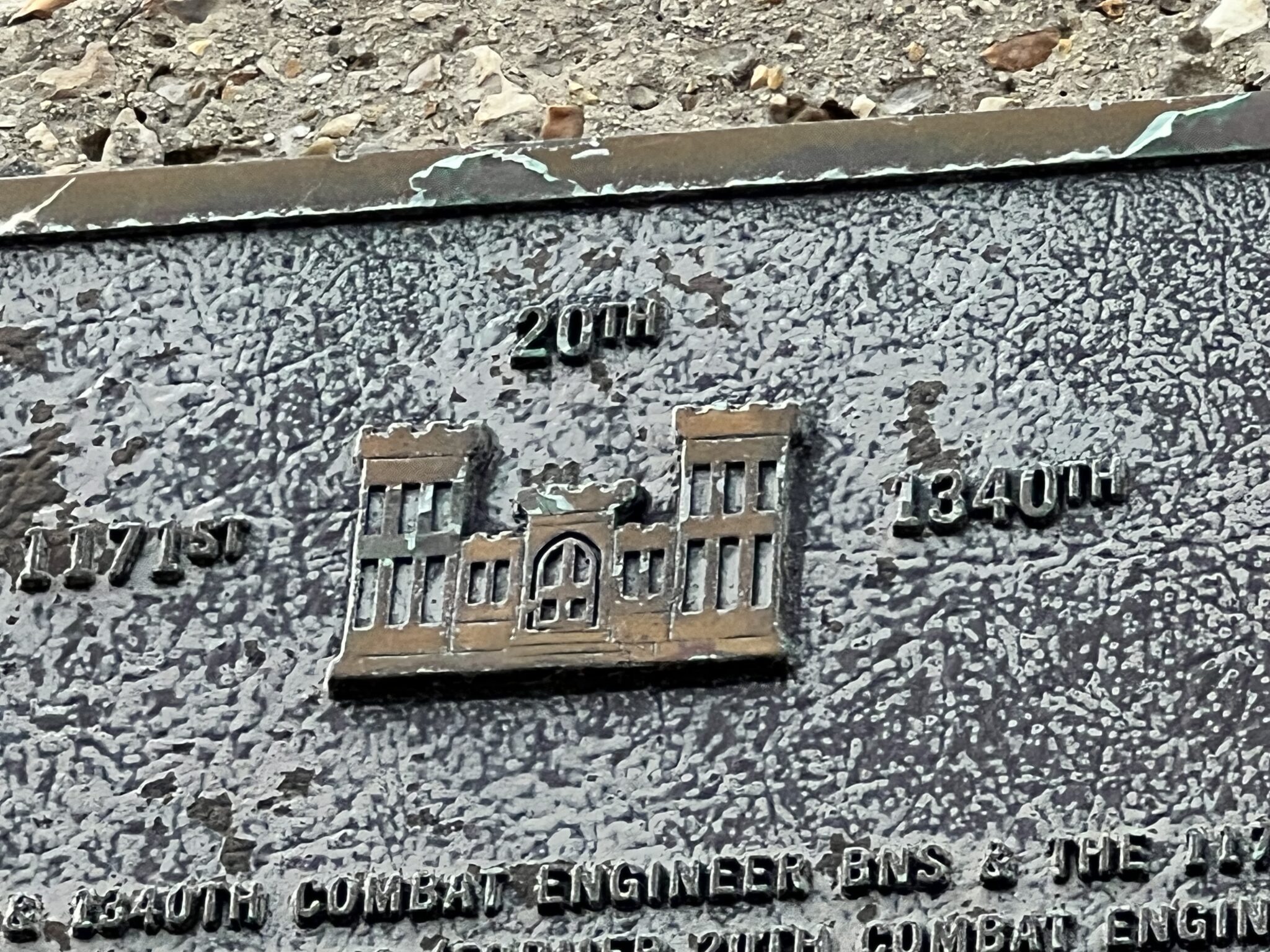 It was a very unique day,  As we arrived at the cemetery,  we were met by a French representative,  and a private cart to take us to the cemetery.   Two French Dassault  jets flew over and tipped there wings.   I asked jokingly if they were for us,  and the French Representative said that it was unusual for that to happen and that they were probably practicing for Memorial Day.  The cemetery was not crowded.  Groups of French High School students were walking around as were a few group tours .   It was overwhelming to see the huge number of white crosses and stars that covered the vast green expanse of grass.   American Flags were flying and it was strange to see so many flying in France.  I can’t remember when I last saw a French flag flown on US soil.  The Ocean was calm and the tide was low and looking out over the ocean,  I imagined the thousands of ships that lined the horizon on D-Day.   I pictured Nicks troop carrier dropping him into deep water 100 feet off the beach as he described to us when he was alive. and I pictured him in a foxhole on the beach trying to breach the guns and barriers on the cliffs where the cemetery stands.

We were escorted to the grave of  Douglas A Chambers 2nd Lieutenant of the 1340 Engineer Combat Battalion from Minnesota who died on the beach on D-Day.   This was an incredible discovery since most who died on D-Day were brought home and buried in the States.  There are many unidentified soldiers buried there but with the advent of genetic databases,  soldiers  have recently been identified and returned to their relatives.  Someday they all may be known.    Lt Chambers very likely knew Nicholas Gray since there were only 17 that were assigned to the first wave and he was an officer. Lt Chambers is the only soldier from the 1340 Battalion buried in the Normandy and one of only 17 that landed on the first wave.

The ceremony involved rubbing sand from Omaha Beach on the cross to bring out the lettering on cross.    An American and French Flag is placed on the grave.  Afterwords the flags can either be left on the grave or taken back to the states.    Gina decided to take the flags and place them on Nicks grave in Los Gatos.   As we reflected on the significance of finding  someone that knew Nick, the American Anthem played over the field .  We stopped;  Gina and I put our hands over our hearts.    After the Anthem, a lone trumpet played Taps as if scripted.    We were told that all this was by coincidence.  It was an emotional day for us and for our guide .  Tears were shed and it seemed that day to me that the French have more respect for WW2 veterans than most citizens of the United States.   The Price of freedom is blood lest we forget

Memorial Day is to remember those who died for our country.  Thank you Lt. Douglas A. Chambers for your service and sacrifice perhaps taking the fatal bullet that was meant for Nick. Your sacrifice made our family and or nation  possible . 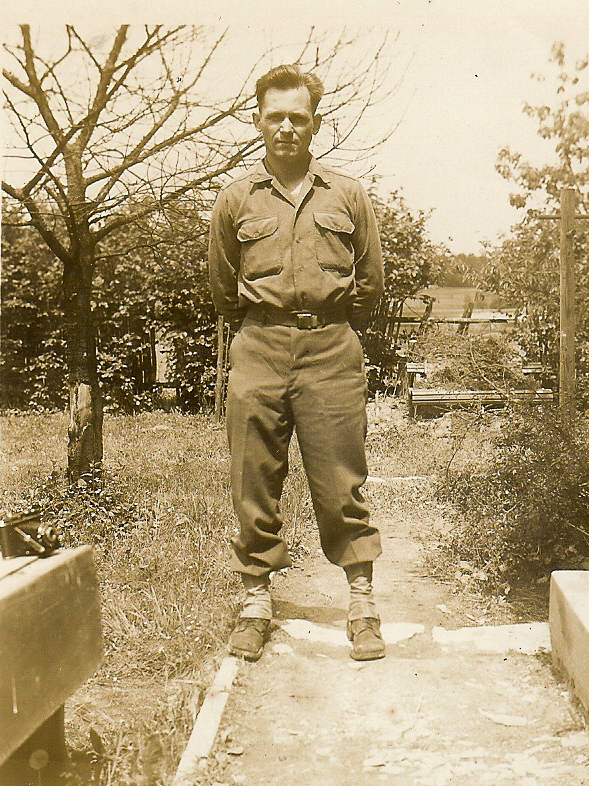 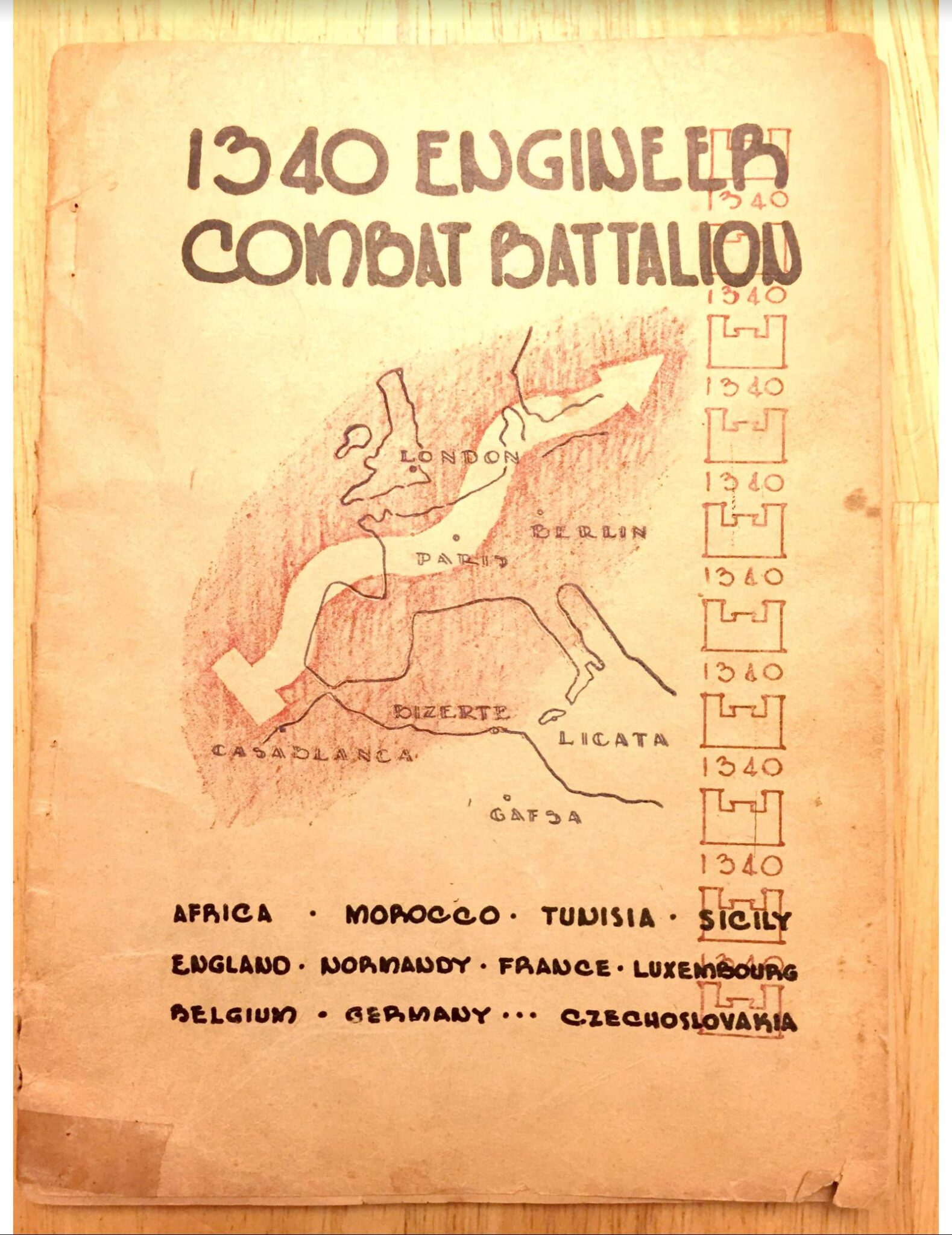 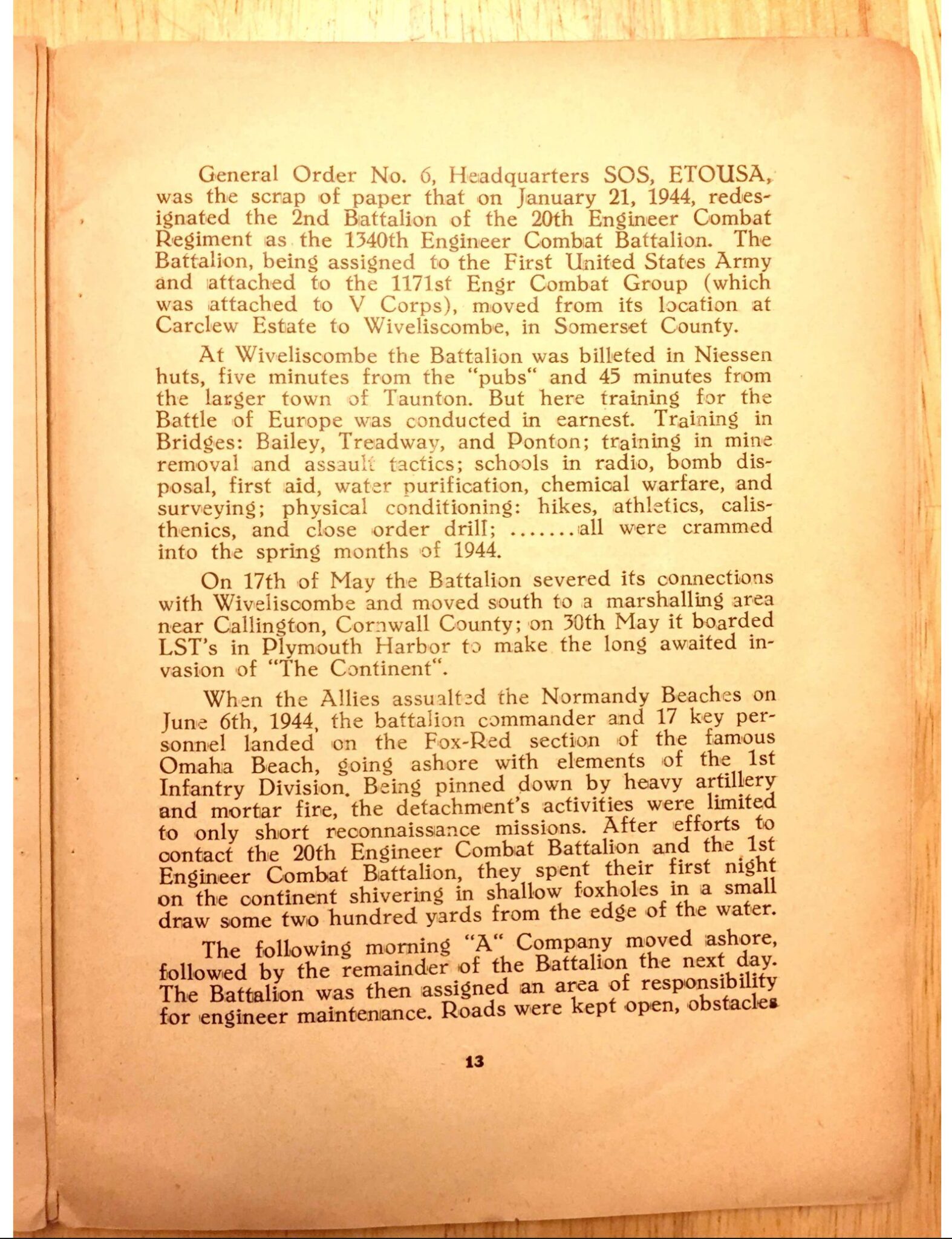 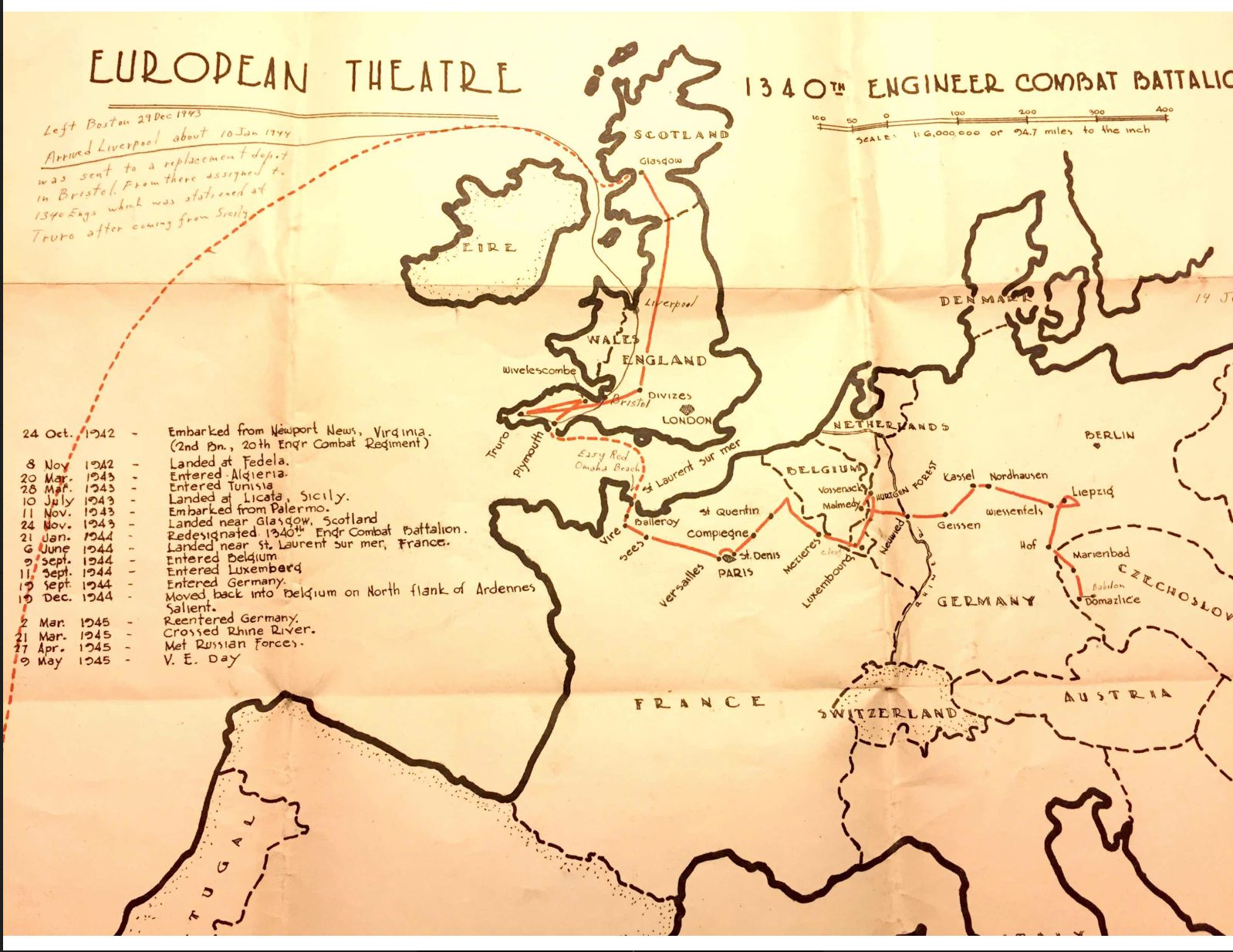 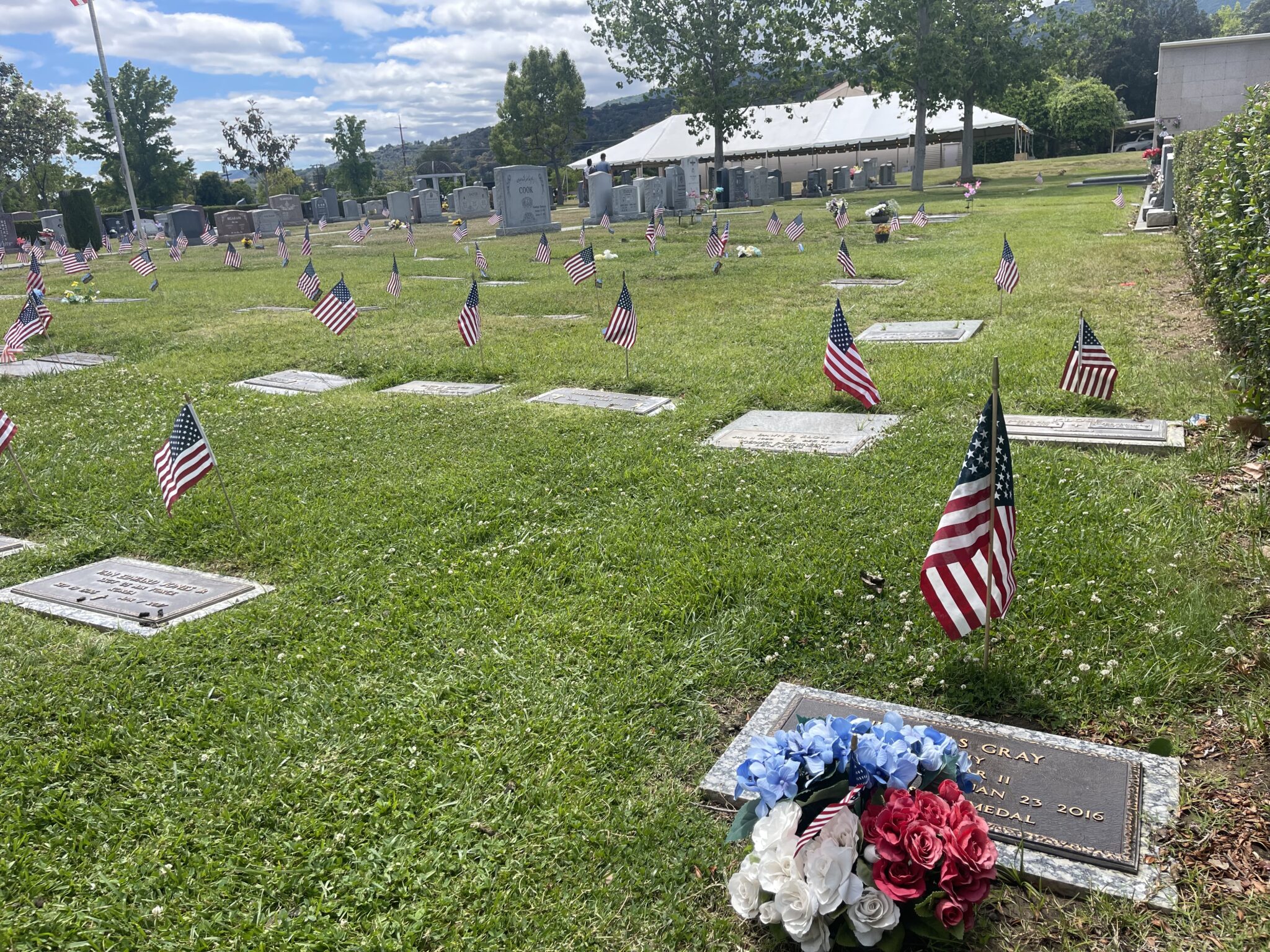 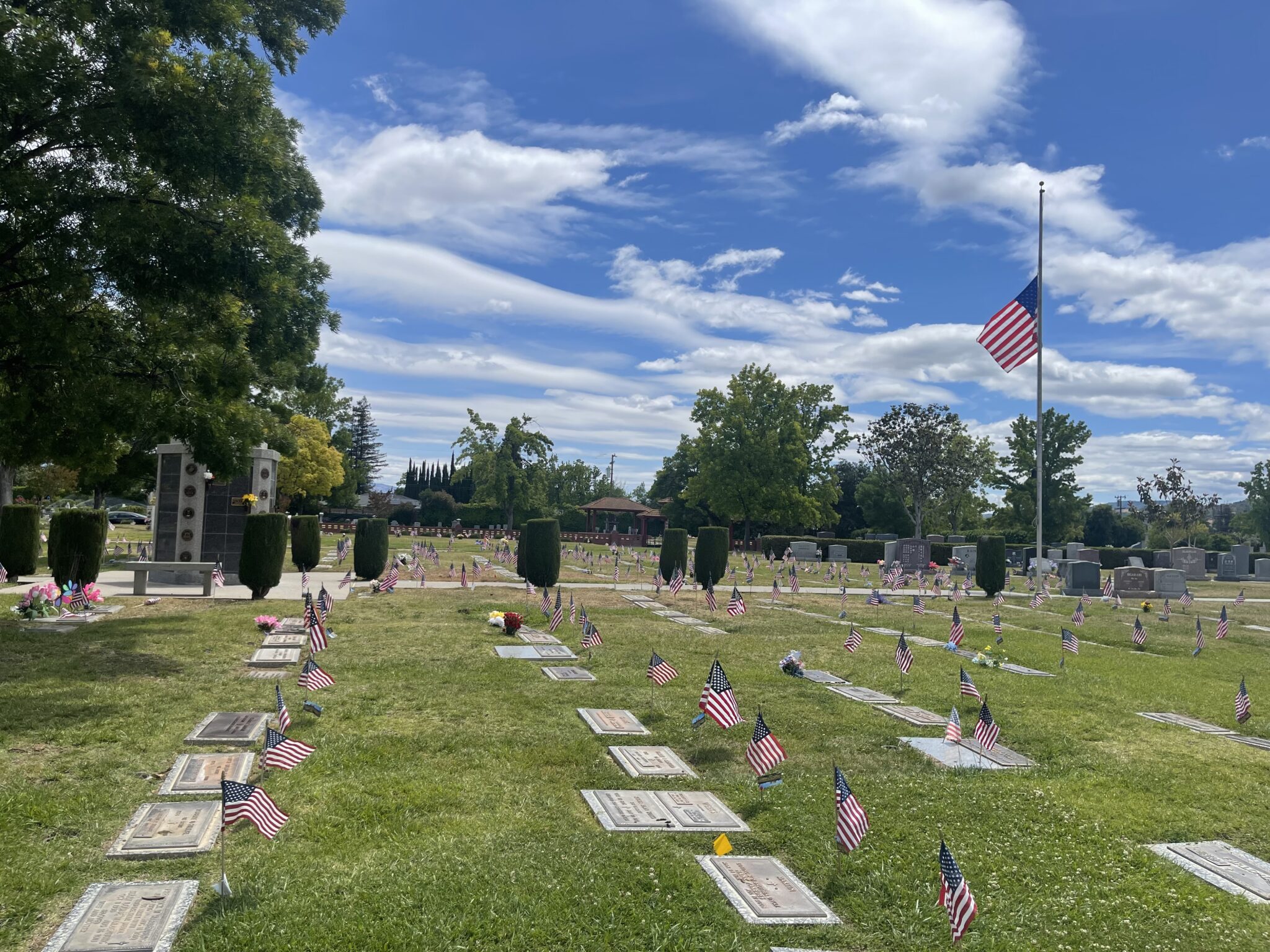 3 thoughts on “A Special Memorial Day”