Friday Dec 16, 2022 – As I pulled up to the forebay,  my phone message lit up.  Frank C had texted me in a rare tech moment, to get over to our spot from two weeks ago.   There were no birds working the forebay for as far as I could see from the dock.     I launched and zoomed over to Frank.   As I approached him,  I could see birds diving on three different schools of bait.   I could hardly get my gear out fast enough.   I really like having rods ready to cast as soon as I stop vs getting things ready at the spot.   It is unnerving to be putting the rod together all wonky  and tying leaders knots and flies on while watching fish go bezerk in front of you.   Plus these moments are rare and ephemeral plus luck favors the prepared.   If you fish with me,  be ready to make a cast before the trolling motor goes down.     I made three casts and had three fish on.   Frank and I were not fishing where the birds were working but we had landed on a school of fish  that was holding in the current around some structure.  I kept thinking it might be better fishing under the birds,  but then we both were pounding them down current from the bird action .    I caught fish everywhere on the north side that was near the birds.

Ive seen some good days on the forebay, but this has to be one of the top days ever.   We hooked fish on every third cast.    My longest run was 5 casts and 5 fish.   By noon   Im pretty sure that Frank and I had hooked at least 100 fish. .   Frank had a couple hour head start on me in the morning as well.    The birds never let up and the fish were on the bite all day long.

There are a couple observations I made today.    There was current  coming in from the Mendota Canal at check 12.    I noticed that the current fluctuated a lot.   At times my trolling motor would be on 5 to hold us in the current and at other times it would be at three at the same spot.    The more current there was,  the better the bite.      Swinging the fly in the current is very deadly.   I can’t imagine a float tuber or a kayak able to hold without an anchor in that current to get the swing.   Also. because of the muddier water,  the presentation was slower than usual.   The bite was not aggressive at all.   Fast striping with the drop was not effective –  more a strip and crawl\twitch seemed to be the ticket.  One of the advantages of the Panoptix in changing my presentation is watching the reaction of fish around the fly.  Even though there were tons of fish looking for blitzes of batfish,  they weren’t expending lots of energy waiting for the opportunity.  They would eat flies that were easy to catch and ignore fast moving single fish (flies) and wait for the schools.  Fish like better odds on energy vs meal opportunities.   Both Frank and I kept a couple fish for dinner and found a mix of fully adult threadfin shad  (4-6 inches). and smaller Delta Smelt. (3 Inches) in the fish.   I use a fly that is a fusion of both baitfish. 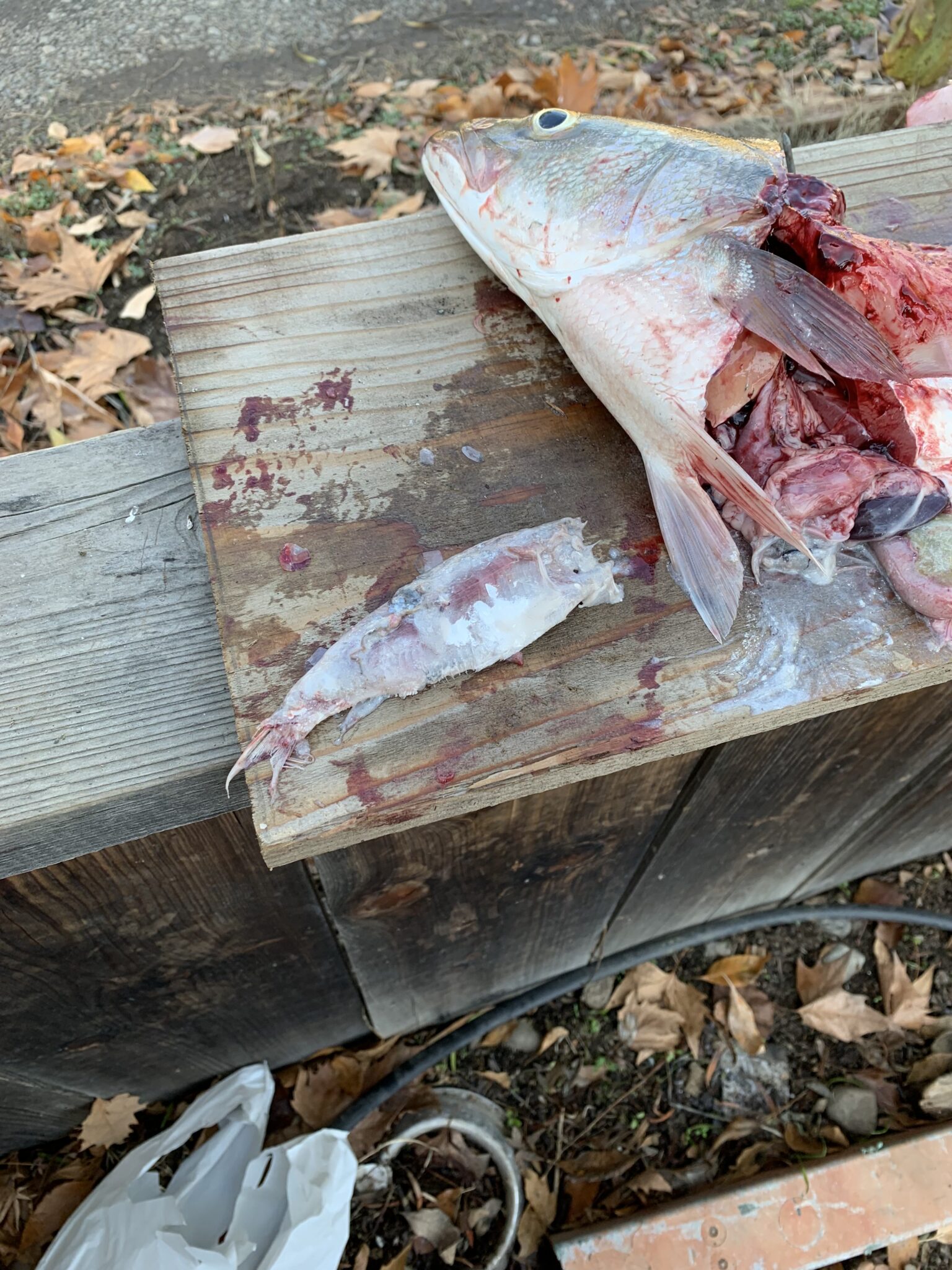 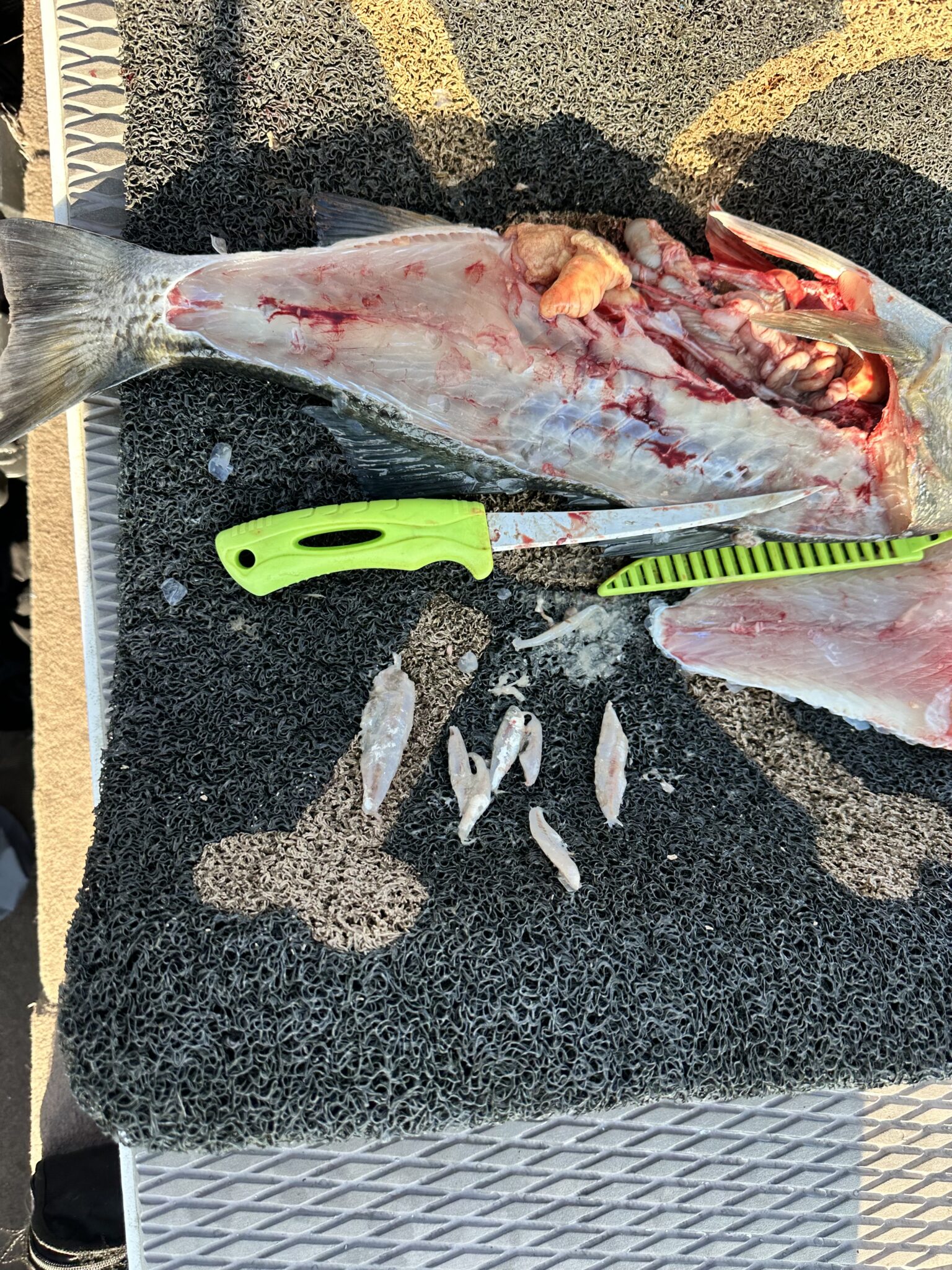 Frank was worn out around 1:00 and had to go home to nurse his guns.    I couldn’t stop fishing and was pretty banged up by 3:00 pm.   When the pace of fishing is that fast,  all I wanted to do was get the fish off and hook and cast to another one as fast as possible.   The fish were averaging over 20 inches and girthy all day as well.    The average time on my GoPro loop was 3 minutes which means most of the day that I was  not positioning the boat , eating snacks or tying knots,  I was catching fish at a rate of one every three minutes.    I maxed out  the SD cards of my GoPro cameras and ended up with the longest video I have ever edited on the Forebay.

The action was so consistently good that I had the opportunity to throw some different flies, lines and rods at them.  I couldn’t get a crash on topwater flies as hard as I tried even in the blitzes.   These fish didn’t like really fast retrieves.  If I saw groups of fish not moving, putting the fly on them and letting it sit there for a long time was effective.    I also tested out the  11 foot two handed Beach Boost fly rod to see just how hard it might be to land a striper on and 11 foot rod in and 18 foot boat.   Some people are turned off by the weight of long two handed rods because they are still in the “hold the rod with one hand mode”.  If you split the weight of any 11 footer between both hands,  the rods are even lighter than one piece rods.  The whole point of two handed overhead  rods is line speed without double haul and fast action to keep the line higher for overhead casting. There is way more forgiveness with longer faster rods.  With short two handers,  timing has to be perfect to keep the T14 high in the air.  If you let it drop for more than a microsecond,  you have a fly near you head or buried in your jacket.    Easy Peasy.

It was a memorable day considering I was just going to scout around and expectations were low considering the rain this week .  I am grateful for my  friends like Frank, Vaughn, Steph and Brian who share there days and spots real time. with me.  As a group we are better.   In the middle of the day,  I called Vaughn back after a text and face timed a striper.   Days like today are a gift from God.  They pop up unexpectedly and are gone just as fast.   In the word of wise San Luis fishermen,   you have to put in your time and never give up early.   I decided to leave the lake early to get the boat ready for tomorrow with Dan to share this opportunity.    He should see this. 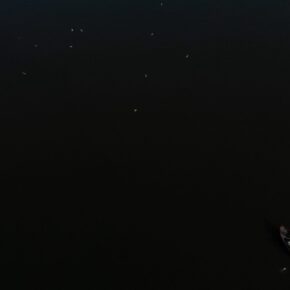 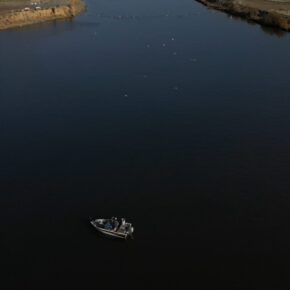 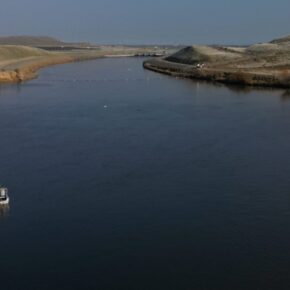 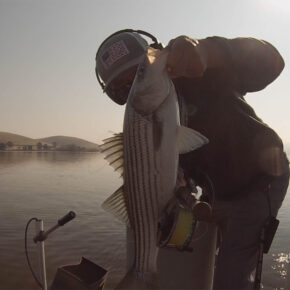 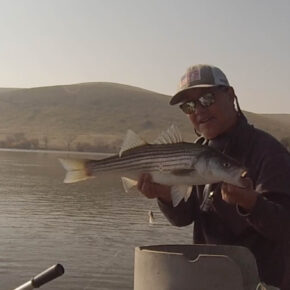 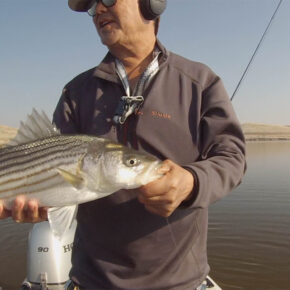 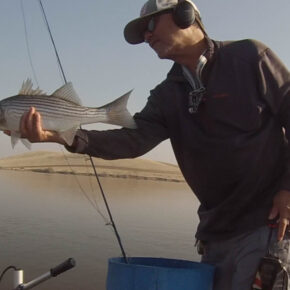 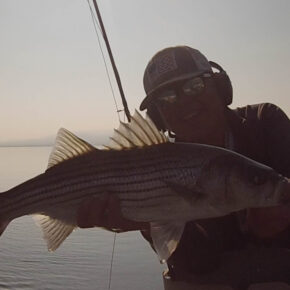 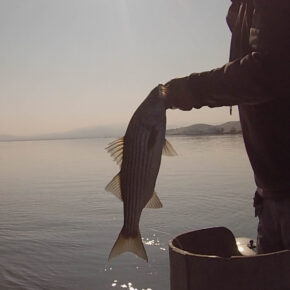 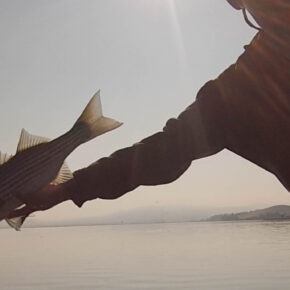 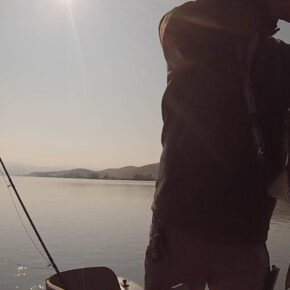 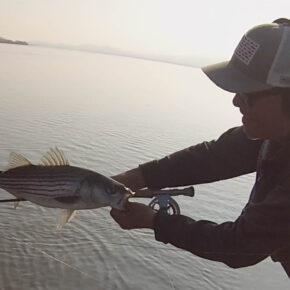 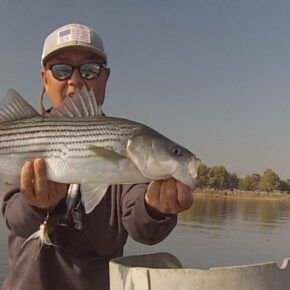 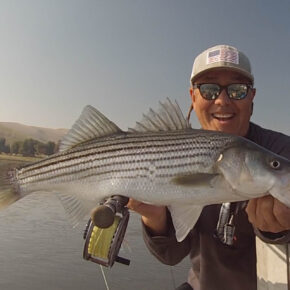 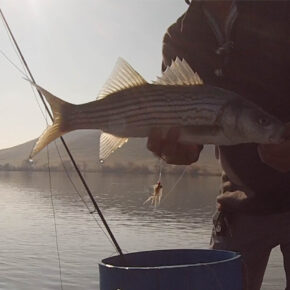 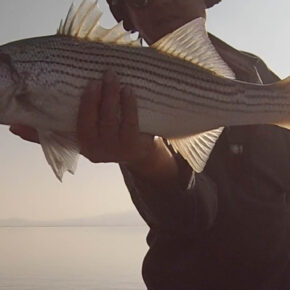 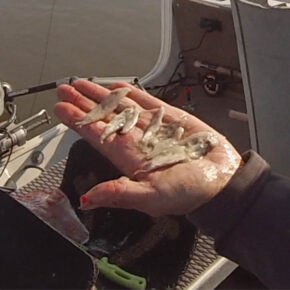 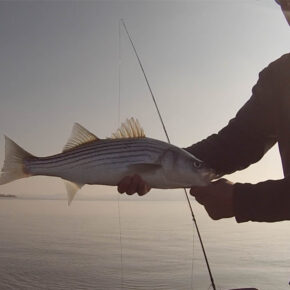 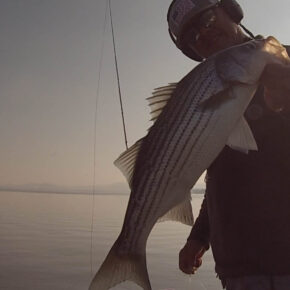 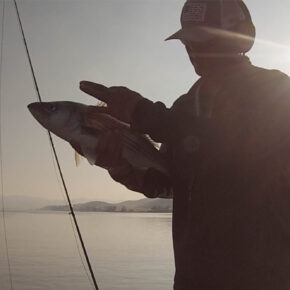 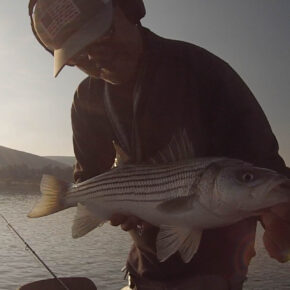 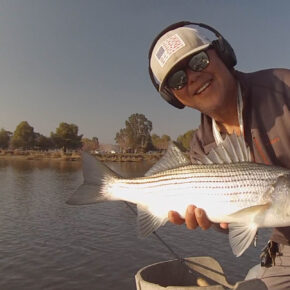 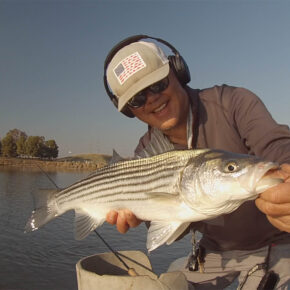 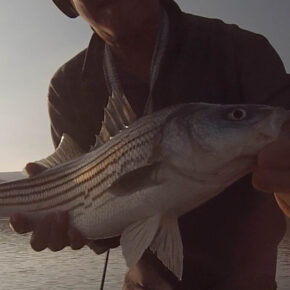