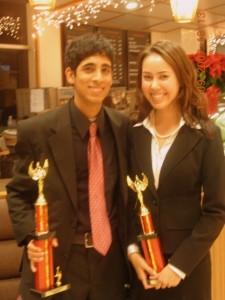 Congratulations to Mia in placing 7th in the State in Oratory Interpretation.  The Tournament tookplace in Culver City April 26, 2009.  Mia made it to the final round in 4th place but final round proved to be very competative and a “air conditioning” incident during her round put her at a disadvantage.   In probably the last Speech and Debate Tournament of her career,  she places 7th out of over 300 statewide contestants. (Thats Mohit with the 2nd place trophy for OI)