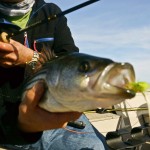 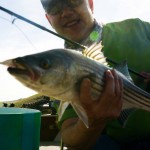 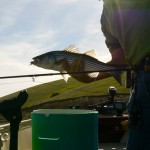 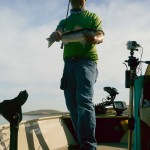 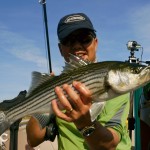 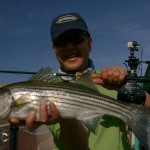 This week was Mark’s Ski week Break  from Leland and I thought I would head over to San Luis for a rare Wednesday morning session before heading off to Badger Pass with Mark and his girlfriend Phoebe.

I had to strip down to my t shirt today when the temperature reached the high 70s on the lake with no wind.  The water was clear and cold but the fish seemed more active.   I landed aprox 10 fish, all around 20 inches despite being on the phone while fishing for 2 hours trying to fix a computer problem at my office.   I left at noon to pack for skiing.   You cant fly fish and talk on a cell phone at the same time.

Today on the lake, I had some issues with my with a  Transcend 32gig SD card that I’m almost sure is a fake one.   The majority of the files on the card are there but the files are corrupt unless its a bug with the Gopro itself.  Ill have to check to see if there is a firmware upgrade for the Gopro.   There are lots of fake Transcend SD cards on Ebay and Amazon.

For the next three days, Ill be in Yosemite trying my hand at landscape photography with the Nikon D700.

One thought on “April in February on San Luis”