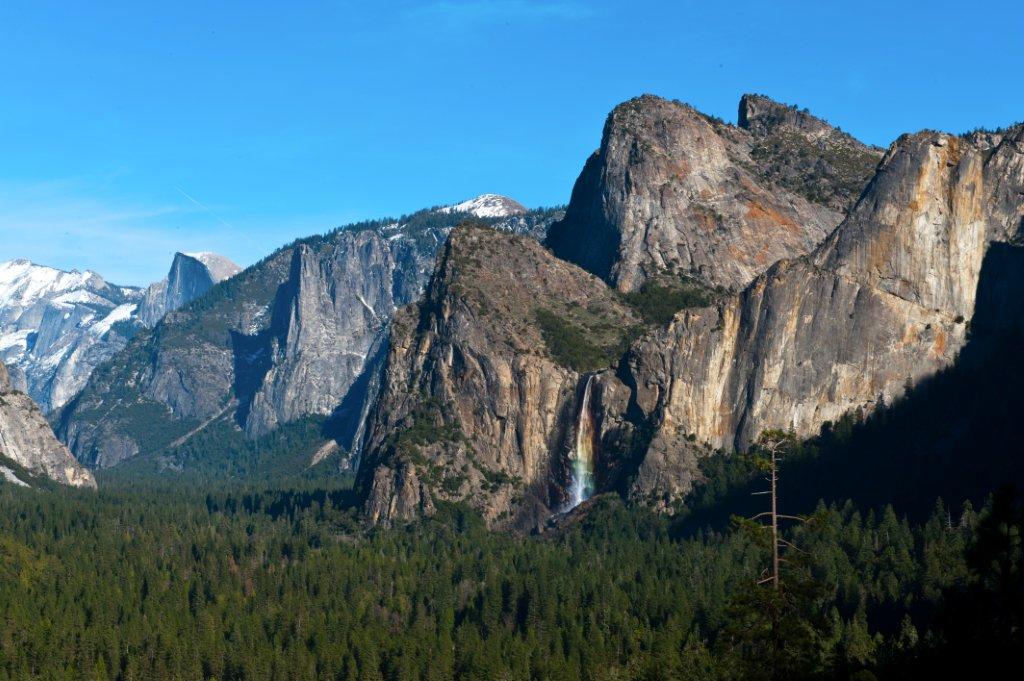 My best shot this weekend was this unusual shot of a rainbow reflecting off of Bridlevale falls at about 3:15 in the afternoon.  I shot this with a D700 and a 24-70 mm at the top of Inspiration Point.   This last weekend, we took a quick trip during Mark’s very last “Ski Week” to Yosemite and Badger Pass.  We booked some nice rooms at Tenaya Lodge , our favorite Yosemite destination when we arn’t camping on the valley floor, 15 minutes from the  Wawona entrance.  We dropped Mark and his girlfriend off at Badger Pass to ski and snowboard while Gina and I drove into Yosemite to find some good thing to photograph.   On Friday, we found some nice spots on the valley floor and got some pics.  At noon we headed over to the Ahwahnee Hotel for lunch and it was as not crowded as I have ever seen.  The Grand Dinning room still reminds me of Hogwarts and it reminded me to try to get lottery tickets to the Bacebridge Dinner again–all luck. We tripped around the park and we took a nice 2 mile hike to the top of Inspiration Point-Straight up from the Wawona Tunnel lookout.   It was great.  We were the only people on the trail and were alone at the top .    When we got up there,  most of the valley views were blocked by trees.   I think there is only one place to put a tripod up there to get an unobstructed view of the valley.  Definitely the winter is the best time to go to Yosemite if you want to avoid crowds.

My original goal was to try to get the photo of horsetail falls that every one flocks to Yosemite to get.  You get that Gallen Rowell shot of the water all lit up with the granite in dark shadows-“Last light on Horsetail Falls.”  but I couldn’t stay that late since Badger Pass closes at 4 and I needed to be at the pullout where Mark and I climbed the Three Sisters by 5:30.  This coveted shot is the recent discussion of lots of photographers.

Driving back on Saturday, so I could make it to the Pleasanton Fly Fishing show on Sunday,  we passed through a dust storm near Merced.  The wind was blowing at least 20 from Merced to Los Banos.   As we approached San Luis Resevoir,  I called the wind line and it said wind was from 5 -17 mph from the North.  As we passed the forebay and the main lake,  I was surprised to see almost no wind on the lake or forebay.   I think this direction is blocked by the foothills and I don’t think I would have fished on wind report like that.  Seeing is believing.  a North Wind at 11 MPH is NO WIND on the lake!