There was a day when I would have taken a bullet for a trout stream in my back yard.   Today, I am cynical and frustrated. Ive lost hope that we can save our fisheries in Northern California from the plight of overpolulation and agribuisness needs.  We environmentalist in reality have only one more card to play and that is the endagered species card. I remember more spawning reds on the Feather River. I remember great schools of Stripers in San Francisco and San Pablo Bay. I remember chumming big schools of Blue Sharks to the boat off the runway at San Francisco Airport.  And I also remember catching large steelhead and salmon in Los Alamitis Creek behind my house in January. Sadley, fishing changes with time and I have come to accept the fact that the needs of the many (those who consume water) are outweighing the needs of a few (fishermen who care about preserving water flows).

I had lunch last week with Richard McMurtry (founder of”Enviromentalist for Living Streams) and Chuck Hammerstad (Conservation Chairman of the San Jose Flycasters).  These men are dedicated friends of fish.   It is no secret that I was at war with the Santa Clara Valley Water District for years fighting eminent domain by them which forced me out of my old office building–a move that cost me hundreds of thousands of dollars in relocation costs. In moving, I discovered black mold behind the sheet rock and all over some charts that were in storage. Too make a long painful story short, I lost to the SCWD in court after attending over a dozen District board meetings and spending piles of cash on lawyers and other law specialists as Seth C. Weston. As my lawyer told me, “…you can’t sue the King and win.” They moved me out and didn’t use my vacant suite for three years after I left. As far as I know, the black mold still exists in the building and they quietly built a daycare over the mold without telling anyone.

In all fairness however, the SCVWD has so much on its plate that I am amazed that a 7 member board of directors (laymen) can accomplish anything at all based on a majority vote. The SCVWD as we know it has only existed since 2009 with the establishment of a voting Board of Directors. Before 2000, it was mainly a water wholesaler. Now it is the keeper of the streams as well as the protector from the floods. When you look at the streams and rivers they watch over, there are only 10 reservoirs under the auspices of the SCWD. The District has 140$ million in reserves and works with a budget of about 400$ million a year.  Its a beast.

Not lost on me is that  the SCWD really doesn’t care much about the streams behind the 10 reservoirs they manage. Most of the water is expected to refresh groundwater aquafiers, and the rest is already sold to southern California and other neighboring water companies. The streams and endangered fish are an annoyance when it comes to meeting all the supply responsibilies they are contracted to meet. I want trout streams in San Jose, but I also want to take a shower daily and water my lawn so it doesn’t turn brown. I fear that most tax payers would abandon the fish and rivers for that reason as well.

So how do desperate environmentalist fight the impossible fight? We play the endangered species card. There can be no trout and steelhead let alone habitat if there is no water in the reservoirs. The reservoirs are all being kept 6 feet under the spillways so that the SCWD can asses their seismic stability. The study, 10 million dollars and nearly three years now, has indicated that most if all the dams need seismic retrofitting so they don’t turn into jello when the earth shakes. If the assessment took three years, how long do you think it will take to fix them all? And, are we willing to wait that long before we put water back in the streams. As Richard mentioned at lunch, to see anything really happen in the next 10 years, the best way is to fill all the reservoirs and work on the dams underwater. The voters of Santa Clara County raised 15.7 million dollars with taxes to spend on environmental projects since 2000. However, they are breaking open that piggy bank in 2013 and transferring that earmarked money to flood control projects.

I can understand that budgets change and so must plans for reserve money. Look at the pension system for god sake. Imagine if we didnt have a Water district. The population served by the Water District is expected to grow 33 percent by 2035. Playing the endangered species card is kinda underhanded since its not popular with the majority, but I am use to it in my dental practice. For instance, I have been forced to spend thousands of dollars each year to filter the spit and water in my dental office for mercury fillings so that it does not go down the drain and into the bay. I have yet to see a study that definitively shows me that Dental Mercury is more than a trace amount of the total mercury coming out of the soil in Almaden Quicksilver Park and yet the SCWD is spending millions to relocate topsoil from the Coyote Creek Watershed near the quicksilver mines. Harassing dentist is a waste of time, money and resources in mercury related environmental issues.

Lastly, and article came out 4 days ago that basically accuses the Fish and Game department for routinely ignoring scientific peer review when trying to work with other government agencies to restore habitat.  Sounds like they give up too. Do you think science is what is driving the project to raise Shasta Lake 18 feet?  Its greed, but then the fish will benefit so sais the Fish and Game Department. 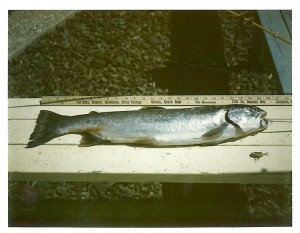 A Steelhead caught in 1974 in Alamitos Creek behind Leland High School before the fishladders were built!

I guess it’s possible for a few good men to be elected to the SCVWD this next election who would make a difference in environmental issues but my past experience makes me doubt.   When I was “evicted” from my office by the SCVWD,  I blamed my district director –Rosemary Kamai–for being the swing vote that cost me my office.  After all she was my district elected board member and told me she would support me.    That election  year,  ironically,  an incredibly qualified candidate ran against her–a water science professor named Dr Ram Singh (sounds like Meng Syn).  I backed him, campaigned for him,  and watched him beat her in every debate and yet he lost.    Elections are fumy that way.  The most qualified candidate can still loose to a candidate with curb appeal, pretty posters and incumbency.