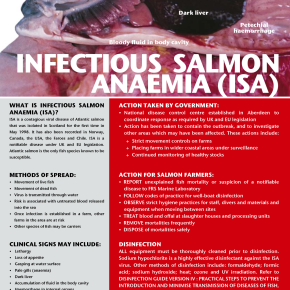 Last week , my son contacted me to help him with a paper he was writing for Genetics class on the  genetically trans mutated Atlantic Salmon designed by AquaBounty that is facing FDA approval this year.  In short -Frankenfish- is a designer salmon made from wild Atlantic salmon stock.   They are fertilized at Prince Rupert Island. The eggs are genetically modified by adding the growth hormone gene of a Chinook Salmon and a promoter gene from a Sea Pout which together make it grow faster and all year round.   They are then made Trisomal (triploid) so they don’t spawn with the wild population and then farmed in freshwater tanks located in Panama until they reach size.  Atlantic Salmon are on the endangered species list mainly because of loss of habitat and there is no wild Atlantic Salmon commercial sources.   All commercial Atlantic Salmon are farmed currently, which led me to some research concerning farmed salmon.

I came across a piece of research in Science magazine published by Christie Miller, a molecular biologist who works for the Canadian Department of Fisheries and Oceanography.   Here recent studies have shown the Salmon Leukemia and other viruses from Salmon Farms located in the migratory paths of wild Salmon in British Columbia are infecting almost all the major runs that swim by theses farms suggesting that open ocean aquaculture is infecting the entire BC salmon fishery–possible irreversibly   Pretty scary stuff.   What is really interesting is that her research is being suppressed by the Canadian Government which depends on aquaculture and fish farming for a substantial amount of revenues. The Canadian Government went so far as to try to legislate it a crime to test supermarket salmon,  farm raised salmon or sushi for fish viruses,  in response to the scientist finding viruses in all the above.  To this day,  they still deny there is rampant european salmon virus in ANY salmon in BC!.  This is bigger than watergate.  Check out this movie.

I’ve said this year after year, It seems that the older I get the more I realize that governments and special interest only use science to support their positions.  It seems you can find a scientist to say anything these days and support it with a peer review article.   In addition, less research in peer review is believable.   Conspiracy theories?  The recent  Water District Bond Measure to protect Bay Area salmon and steelhead was a joke–a trojan horse designed to increase taxes to fund special projects within the water district that have nothing to do with Salmonids,  and so I might add is the Fluoridation of Santa Clara Valley Water at a cost of 24 million dollars when the target population  for such a program in northern California is unclear.