It was a great day on the lake today.  The weather may have been too good – slight overcast with heat and no wind.  The algae is happy and my boat trailer looks Irish. Everybody was out today in force including a couple guides and Vaughn-Larry again.  Amazingly, Larry who wasn’t able to cast three weeks ago, is now flinging his own flies and catching lots of stripers.  Likewise, my beginner,  Rick caught 8 stripers to my three!  No big fish today even though we got up early and tried the Dam at the Bay of Pigs early in the morning looking for that 20 Plus but it eluded us.  Mr Santucci was working the flats as we pulled up to the dam at 7 AM.

The highlight of the day however was not the striped bass fishing which, for the dozen flyfishing boats out at the trash racks,  was great.  You could see the schools move around the boats as one boat would hook up doubles for about 15 minutes  while the boats around them were slow.  Then the action would move to another boat and so on   You had to be in the right place but if you were patient,  the right place would come to you and then it was pretty easy.  I saw all sorts of flies today and they seemed to be all working.  Also all sorts of strips were working–both fast and slow.  We did well on small sparse yellow clousers and brown over blue clousers.  I think the best flies are lightly weighted so they dont jig vertically so much on the strip.   Also small flies seemed better–like size 2.    We hooked over 15  stripers in a span of an hour but kinda dead most of the day.  It was hard to find the schools and get on top of them.    It got slow at times which allowed me time to spy some  Pelicans diving  right near the dam  towards Romero just off the rocks with my binoculars.    I left the pack to investigate and  found several large schools of nice sized American Shad swimming up and down the bank near Romero. I also noticed three fly fishermen fishing on the bank at the corner of the damn catching shad until they got run off by the dam police. 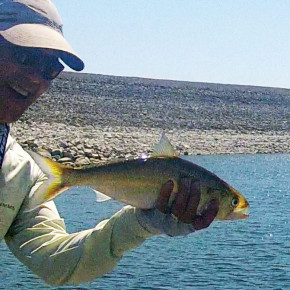 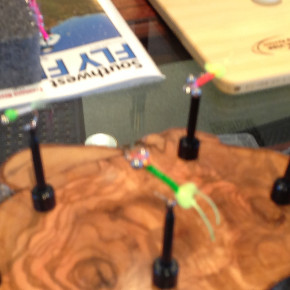 We had a blast chasing these schools.  I had a 6 wgt rigged with a shad fly ready in the boat and we managed to catch over a dozen of them.  Rick had never been in a position where he had to make the perfect cast and quickly.  His first sure thing shot went into the rocks,  and the second one, he massively tangled his fly line before the cast.   Meanwhile the fish 15 feet in front of him were churning the water white.  It was quite a sight.  The schools were moving at 3mph and it was as much as we could do to keep up with them with the MinKota Trolling motor.   One school we chased along the bank for over a mile.   We actually got on top of several of the schools right on the bank and they were huge.

The DWR Dam Police were busy today.  There were so many boats violating the 500 ft easement that they ended up calling for a Ranger to launch .  They showed up around 2pm and lectured all the boats that were too close including the Guides who were fishing off the rocks of the dam.  Most just quit for the day.  Despite the fact that we were exactly 166.6 yards away from the structure,  based on my Golf Laser Range Finder,  they waved us off and we decided to go catch some more shad.   The DWR  (AKA the Dam Police)  can not ticket you but the Rangers can (but they dont usually).