Since I intend to use my newly acquired DJI Phantom 2 Vision over water to do fishing videos, Im getting paranoid about water landings. It seems that most people who use the Phantom in aquatic environments have strapped bottles, and foam to at least keep the thing floating in the event of a crash. Not intending to keep all the electronics out of the water, but to keep it up top to be retrieved, dried off and repaired. Its pretty amazing to note that several water crashed Phantoms have been reported to have survived prolonged freshwater dunking without much problems. Saltwater is a different story requiring immediate rinsing for any hope. Replacement motors run around $30 a piece, replacement props are $10, and the entire camera unit runs around $500 (like a GoPro). I have been toying around with coating the camera boards with Neverwet. Around the camera enclosure are some vents and buttons which could leak water on a submersion. I was thinking of sealing them but there is a fan inside the camera so heat must be an issue. Contemplating a light plastic bag over the camera secured with a zip tie to slow down the water in the event of a water landing. 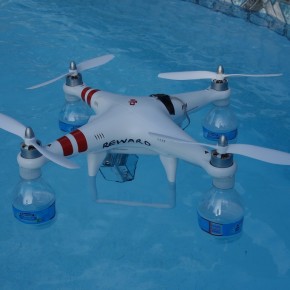 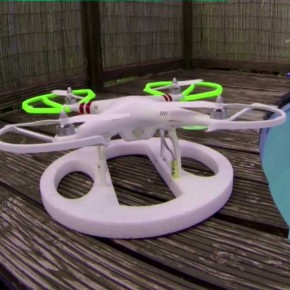 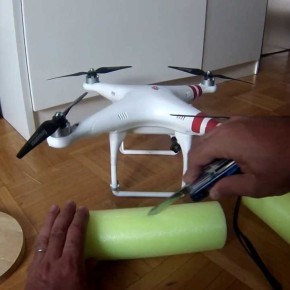 I sometimes wonder if it wouldn’t be better to just use a GoPro and build it onto a Phantom 1 but the whole rig is not as versatile as the Phantom 2 Vision which at $1,200, isn’t cheap. Assembling your own GoPro rig would cost $500 for the Phantom 1, $400 for the GoPro Hero 3 Black, $700 for the DJI stabilizing gimbal, totaling $1,600. Although the Phantom 2 camera doesn’t allow you the flexibility of the removable GoPro, as an out of the box aerial photography solution, the Phantom 2 Vision is tough to beat. 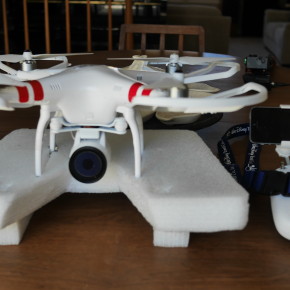 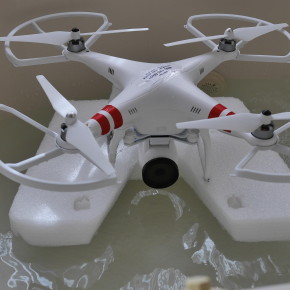 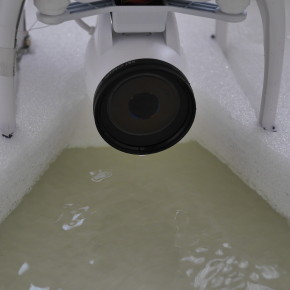 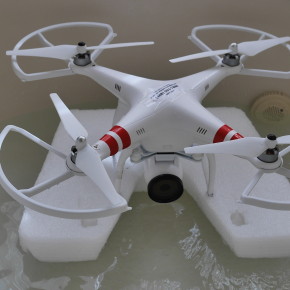 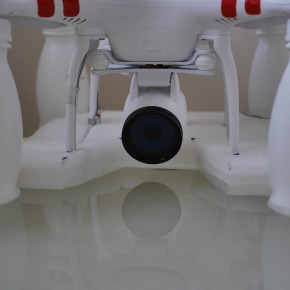 These original prototypes are very heavy and I have a hard time flying them. I think the ideal way to float the quad is a combination of foam and bottles. Not all bottles are the same however. The white ones I originally mounted are nice looking and the perfect height for ground landings but they are thick walled and heavy. I think perhaps the cheaper thinner bottles are lighter and if I attach longer ones, they may help the copter to ride higher in the water. Im still experimenting with different bottle\foam configurations and floating them in the bathtub.