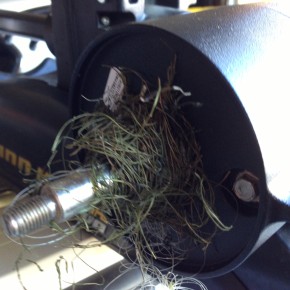 I’ve been having some intermittent problems with the first gen IPilot installed on my Terrova this last year.   Initially,  the trolling motor would cut out while at max RPM.  However, it would cool down and then start after awhile.  The first thing I did was check the prop shaft for line and sure enough there was a ton of mono and spectra wrapped around the shaft.  I guess its just floating in the water all the time.  Eventually,  I traced the problem  to a loose lead on one of the batteries.  The Minn Kota  24V  Terrova is very sensitive to loose connector  leads which heat up at the push button breaker on the battery  terminal.   I would not have thought that just tightening the leads would make a difference but it did.   They didn’t really feel loose.  Since tightening,  Ive had no issues with cutout at max rpms.  After that problem solved,  the remote control started to occasionally power off.   After  hitting multiple keys and pounding on the controller ,  it would start working.    I tried changing the batteries,  and re-linking the unit and still, once in a while,  the controller goes blank, sometime right in the middle of operation. I haven’t solved the problem but I was told by Minn Kota that I might need a new controller which is just the excuse I need to upgrade to an IPilot Link. 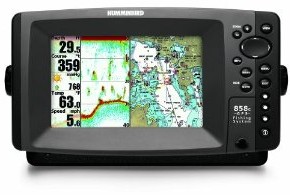 The IPilot Link sytem the next generation of GPS controlled Trolling Motors. The Ipilot is linked to the Humingbird Fishfinder with a Lakemaster SD Card through ethernet,  Since I have a Lowrance HD-10, I wasn’t looking for a Humingbird unit that had Side or Down scan.  The only ethernet capable, I-LINK compatible,  sonar only unit was the Humingbird 838C Combo,  which i decided to buy to replace the bow mount fishfinder.  In addition,  I needed the FIshfinder to be compatible with the Terrova’s US2 built in transducer which Minn Kota lists Humingbird 858c COMBO as compatable 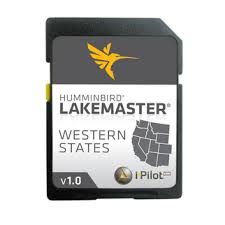 The computer/gps in the Fishfinder loads software from the Lakemaster Card that allows you to do some very sophisticated things with the autopilot.   In addition, the remote control has a bigger and brighter LCD color screen with feedback telemetry unlike the old controller.  The remote itself is a great reason to upgrade since it allows you to select waypoints and tracks that are broadcast to it from the fishfinder’s computer such as depth, speed, water temp .  In addition you can  scroll through waypoints and tracks.  The Humingbird can store up to 25000 such points and they are accessible through the remote as well as the fishfinder.  Every time you spot lock (electornic anchor) ,   a Waypoint is created making it easy to return to productive spots.    At any time,  all the spotlocks that are in  close proximity are displayed on the remote.

The main improvements in my opinion, of the Humingbird/I-Pilot Link is features from both units.   Unlike the Lowrance,  the Lakemaster Loaded Hummingbird has “Water Level Offset” which adjust the map to accommodate lower water levels which is especially nice with the low water conditions likely in the next years.  Perhaps the most useful feature of the duo is Follow the Contour and Contour offset.  These will allow me to fish along a given depth either right on a contour line or at a given distance to a contour line at any speed.  Contour offset is actually more useful than the follow contour since its the depth I want to fish in, away from the boat and not under it, when we fish flies.   For instance,  I can set the boat to stay exactly 100 feet from the shoreline going at 1 mph and it will follow the shoreline despite any depth or  shoreline direction changes.   You could not do that with the old IPilot navigation options.    Most of my interaction with the IPilot till now was making slight navigation lock  adjustments while paralleling the shoreline and casting.  This should eliminate this. 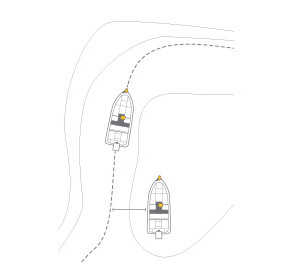 The Lakemaster/Humingbird can highlight shallow water in a different color so you know whats off limits  Also you can shade different contours so if you think the fish are hanging out in 20-30 feet of water, you can highlight all the lake bottom that is that depth and look for new spots.

I really like those features on the Humingbird but the side sonar and down scanning of the big screen Lowrance is just too sexy to replace.  Therefore Ive decided to use both systems despite the fact that my dash is looking like mission control.  I have been debating on installing a second monitor for the Humingbird at the main dash just to see the maps from the back of the boat since the Hummingbird 858c Combo has an optional cable that outputs a composite video signal to a smalll LCD monitor (like the 7 inch LCD montiors used for car backup systems)

I decided to try to use my old Ipilot on the Portaboat so I dont have to anchor it.  It would mean trying to find a used cheap Minn Kota Powerdrive v2 which Ive seen on ebay for about 200 bucks.  It would mean building a bow mount plate for the 12 foot Portaboat also.  Those modification Ill save for another day and another post.

So that is the story of how changing a battery in my old ipilot remote ended up costing me $1500 in upgraded fishfinders and trolling motor accessories.

Feb 8th 2014 –  Its finally started raining so this weekend I installed the equipment on the boat.   Everything went pretty smoothly.  The head came off the terrova with 4 screws and after unplugging the old ipilot and replacing the it with the new ILINK, its exactly the same except for the addition of one more cable–the Ethernet cable which runs parallel to the Transducer cable to the Hummingbird Fishfinder.   The Remote is now a rechargeable USB device like my iphone.  It has date, time, battery telemetry on the color LCD screen.  The remote is like going from a flip phone to an Iphone.  It has a big color screen with lots of information and you can control just about anything with it as well as access the fishfinder information right on screen.

Feb 9th 2014-  This new system has three sets of firmware that need updating.  The HUM 858C needs firmware 6.810 or better,  The IPilot ILink Controller Head on the trolling motor needs Firmware 1.160 and the ILINK remote needs firmware 1.150.  None of the three units out of the box had current firmware and they refused to work together.   To upgrade these three things,  Minn Kota decided to let Humingbird provide all the firmware support for the IPILOT units.   To download these firmwares,  you simply login into Humingbirds support site and register you stuff.  From there,  they tell you what the current state of your stuff’s firmware is. I had no problem registering the 858C, downloading the firmware, and updating the fishfinder.   When I tried to register the IPILOT on Hummingbirds Support site,  the site refuses to identify  my IPilot Serial Number  and will not let me download any firmware upgrades. I cant find the files anywhere else and have a urgent request into Hummingbird for some support. I called support today and a couple nice ladies registered the IPILOT ILINK on the support web site for me. The upgrade process was a bit clumsy.  You have to upgrade the Controller first and then the remote.  They both took over a minute after I inserted the SD card  to recognize the software that was on the SD card.  Everything is up to date now so the next step is to test it all on the water.

The new upgrades address problems with SPOT LOCK drifing more than 5 feet and also increase the water level offsets on  the Fishfinder to 200 feet from 30 ft which will come in handy at San Luis Reservoir. 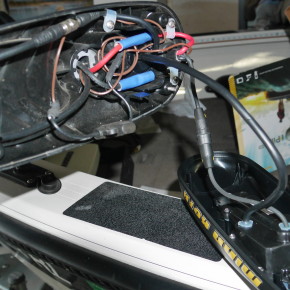 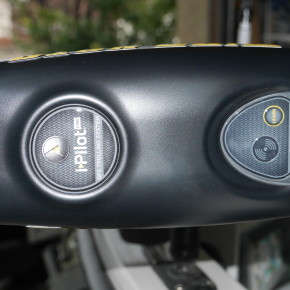 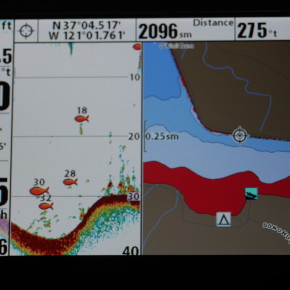 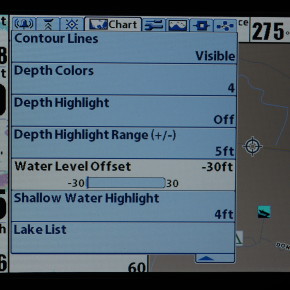 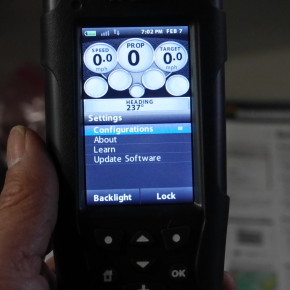 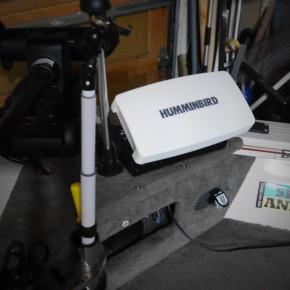 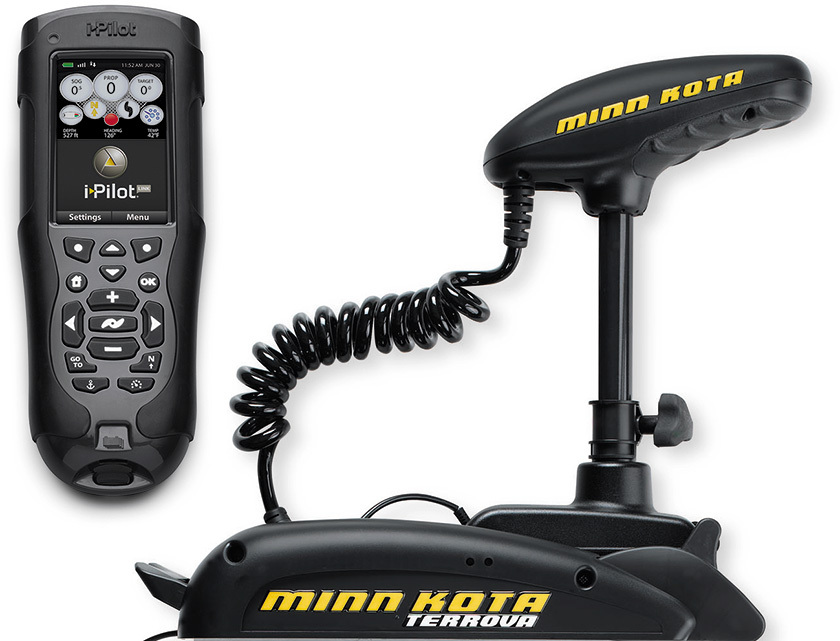 2 thoughts on “Fish Trek – The Next Generation: IPilot-Link”