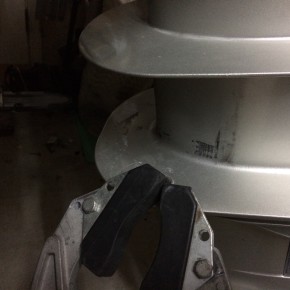 I love these rainy weekends because it gives me a chance to catch up on boat maintenance and upgrades.   While waiting for some technical support from Hummingbird which starts tomorrow at 6AM (8am CT),  I decided to change the oil on the Honda 90 and clean the boat up a bit.   I noticed that Transom Saver that I had been using the last two years was making a deep mark on the Outboard.  After reading a bit about transom savors.  There is much controversy over their benefit amoungst the various boating  forums.   Some say that the Transom Savers were made for outboards before the existence of hydraulic lifts.  They were originally designed to keep the motor from bouncing on the transom.  With today’s hydraulic trim tilt outboards,  some say that they are designed to save the hydraulics from bounce wear.  Some say that the Transom savor keeps stress off the transom which may have been true for outboards that could freely bounce with no hydraulics and that were freely hinged.   My Honda 90 outboard when raised will not hinge upwards. I imagine that the marks were made because the bounce of the trailer independent of the  outboard hammers on it with every bounce which actually stresses the transom and puts a mark on the outboard.  My opinion now is that a Transom Savers attached to a trailer does more harm the good. They just transmit the shock of a bouncing trailer to the engine.   I discovered a couple options to the transom savor that if good would also  be easier to use and as or more effective as what I have been using.    The two options are the “Lock and Haul” and the ” M-Y Wedge”  I think its about taking the stress of the hydraulics.

They both look excellent but I chose the M-Wedge mainly because its easy to stow and it seems to have a shock absorber function more so than the Lock and Haul that is rigid.  Also,  I believe having the hydraulics completely  un- pressurized with the Wedge in will help prolong the life of my trim and tilt.   I purchased some centering blocks as well which fit on the steering hydraulics to keep the motor straight. 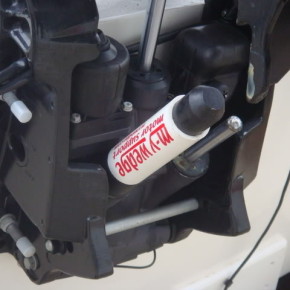 After using the M=Y Wedge for a couple months,  I noticed that the outboard would not stay centered with the rubber clip on the steering linkage.   It just smashed and distorted the rubber clip.  Maybe two of the MY Wedges would work better. I ended up buying a Lock and Haul.   My first impression driving to the Lake with it is that it is superior when it comes to keeping the outboard straight.  It was easy to setup and I like the clip and the size of the unit.  Its easy to stow. 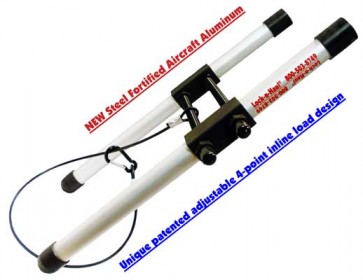