Yet another rainy windy weekend at home with no fishing has not gone wasted.  I finally think I have an amphibious landing gear design for the Phantom Vision that fulfills all my requirements.   Instead of mounting the custom landing gear I scored from Shapeways thanks to “Simonsays”, on the fuselage,  I mounted them below the motors which gives me a wider stance and way way more stability.   I think the floats need to extend to or beyond the outside of the prop arms in order to keep the center of gravity lower on the boat.  To keep the camera dry,  I tried some designs were I attached long foam pontoons to the stock landing gear.  They did float the quad but they were very top heavy.  Lowering the pontoons to keep the camera off the water when pointed straight down, makes the whole rig top heavy.  It becomes necessary to extend the pontoons further out to regain stability.   I think the ideal pontoon extension is beyond each prop arm to the farthest extension of the prop.  The Foam is supported by Carbon tubes.  I attached the three sections of carbon tube with heated shrink tube electrical insulation.  I attached a crossbar of foam to keep the entire pontoon rigid since the pontoons are cantilevered out beyond the landing struts.  The pontoons form an H shape and prototypes without the crossbar were not stable.  I played around with different types of configurations by building shapes with  foam and toothpicks  till I got the shape that balanced the quad in the tub.  The entire landing gear weighs 165 grams and I think its light and stable enough to fly over water.  Also, the wide stance of the H does not block the camera in any position –even straight ahead and straight down.   I just hope it flies tomorrow. 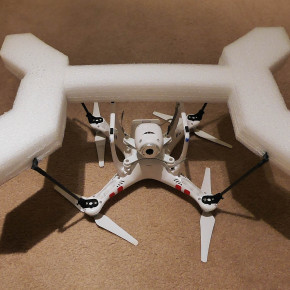 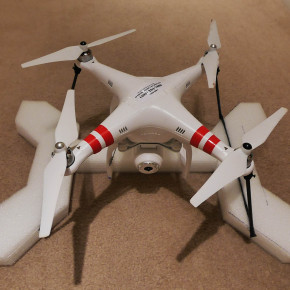 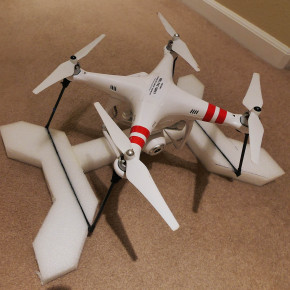 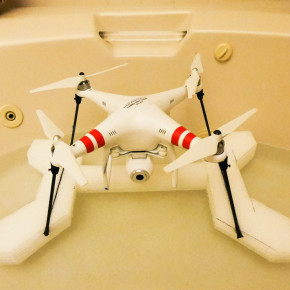