Its been ten days since Ive been to the Oneill Forebay. Since that stellar day that Dan Blanton and I had the entire lake to ourselves, Ive been anticipating a repeat day for weeks. The wind last weekend was pretty vicious and last trip’s weird weather might have made it a freaky day. Maybe last time out a coincidence -and we got lucky. Yesterdays, wind forecasts were spot on, there was little wind all morning. the Solonar tables were showing a great day. I tied a bunch of small yellow rattled closers with light bead heads so they would suspend better on the pause, packed some cold water and headed to the lake at 5:30. 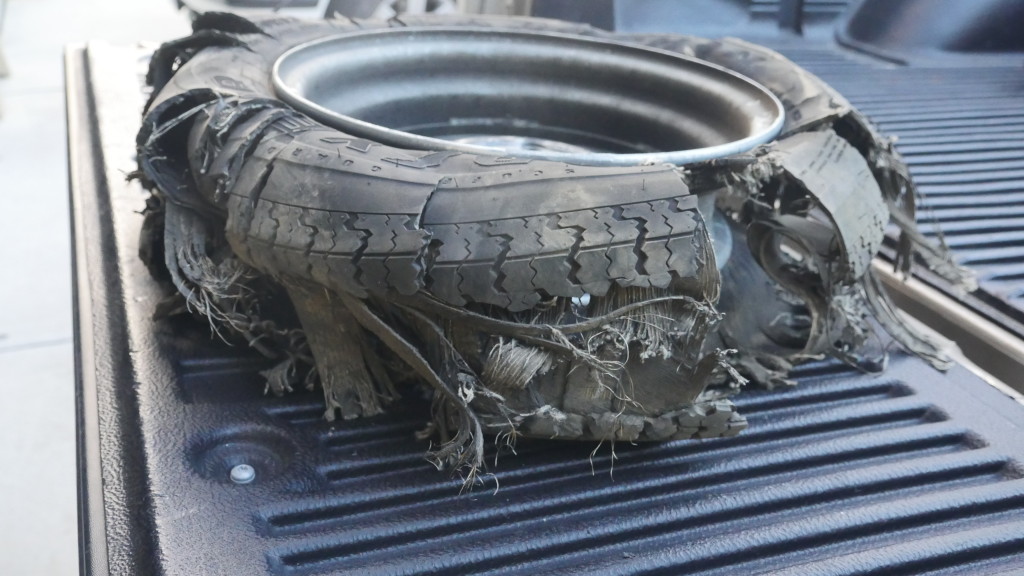 Somewhere right before Casa De Fruita, the Back left tire on my boat trailer blew. It was a brand new tire and now that makes three flats on different sides of the boat in two years. Im thinking that those Goodyear Marathon Tires suck ever since they started making them overseas. The trailer is perfectly aligned, no wobble or rubbing. Those tires never just get flat–they disintegrate into a bloody mess so there is no way to see what caused the blowout. Im so paranoid about flats now, that I’m OCD about the tire pressure and check them thoroughly before each trip. I find my self checking the tires every 5 minutes in the mirror and every weird bump or rough road makes me nervous. Also , the tires are rated at 65mph only, I sometimes drive faster. Perhaps that’s the problem. Most likely its road debris. There is a lot of road construction on 152 between Gilroy and Casa de Fruita and all my flats have been on this stretch. At least Im getting fast at jacking up and replacing tires on the trailer. I managed to get the spare on in 15 minutes. Unfortunately, I lost my head start on the day.

Lately, I have had some interesting experiences putting the boat in the water at San Luis. I pulled into the inspection line behind a pickup truck with a float tube in it. When the owner got out of his pickup, I noticed it was my old friend Ken Oda. Ken is one of the most skilled and knowledgable flyfishermen I know and its not because he works for California Fish and Game. He is truly an avid fisherman, not only a skilled fly fisherman, but a skilled conventional surf fisherman. He knows where those special places are to catch fish around the Bay Area, like the mouth of the Pajaro River and the bay wetlands. We have fished over the years for Tarpon, Redfish, Trout, and now Stripers together. It was a fortuitous coincidence that I arrived at the launch at that precise time, and I invited Kenny to fish with me in the boat. I wanted to know where he fishes since he has been fishing San Luis for over 30 years. 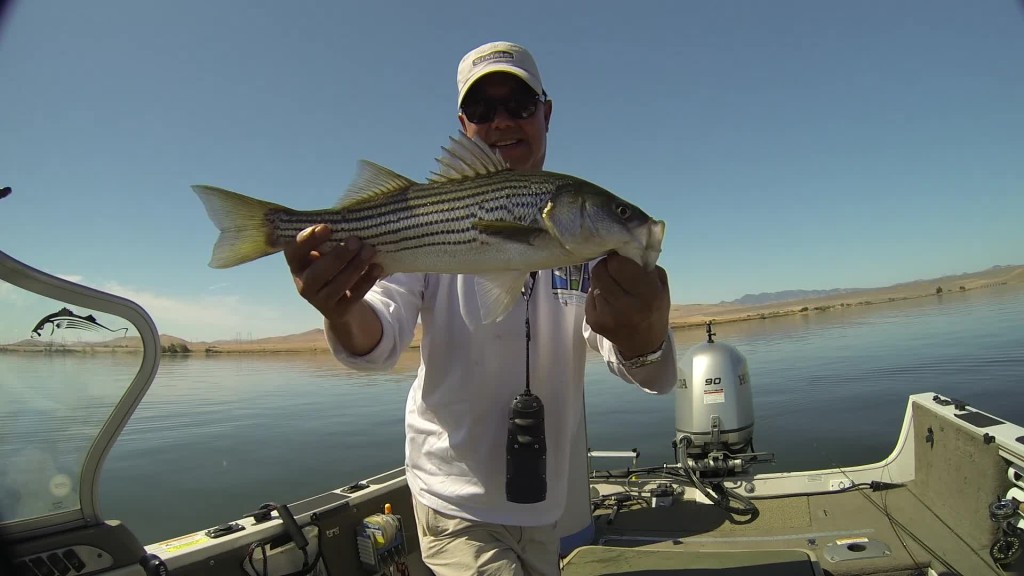 As I was launching at 7:15, a guy in a bass boat was coming out. I asked him if he had engine trouble and he said no and told me he was a local and fished for only a couple hours and had things to do in the morning. He told me he caught a dozen stripers up to 16 inches and was headed home for breakfast. vlcsnap-2014-07-27-12h46m32s110 Kenny and I headed out to the Madeiros Rock wall at Check 13 right away to see if the fish from last week were still there. The conditions had changed radically. The water was three feet down and there was hardly any current in the channel. We picked up half a dozen small fish but it was no where near the action of last week. I met up with Steve Horninge in his boat and they two were having a tough time fishing the weed line and wall at Medeiros. After fishing the wall Kenny suggested we fish the edge of the weed flats up to the power lines along the buoys. We motored up to check it out and discovered that the weed line had extended out to the cut channel due to the really low water. We had never seen that before. We fished the weed line that was farther out than usual trying to stay in 15 feet of water and we picked up another 6 fish in the muck. There was lots of weeds floating around and suspended in the deep water. 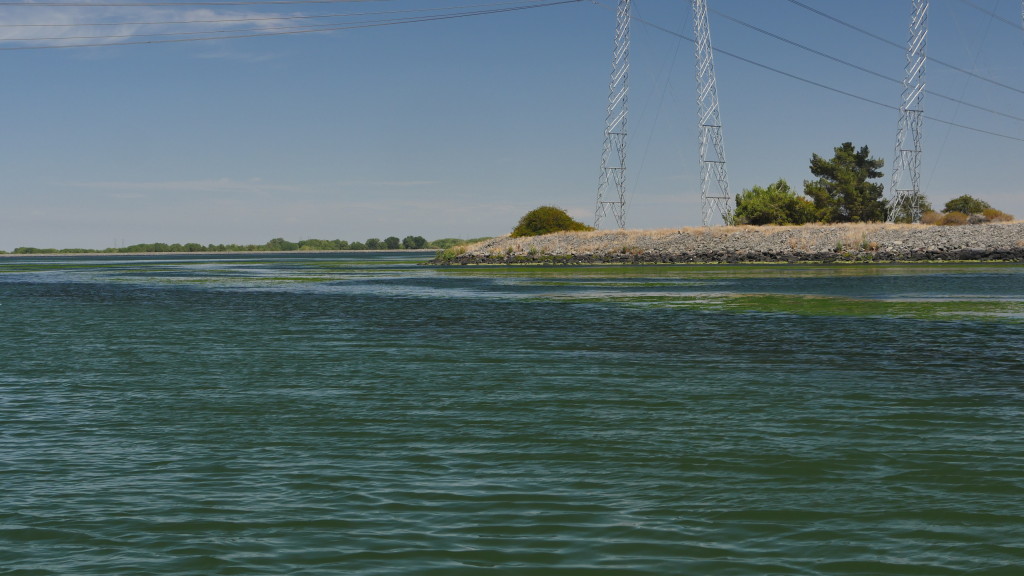 Finally we decided to try the channel towards check #1. As we approached the islands we noticed that the weeds and low water forced all the water into the main cut channel, We decided to fish the edge of that channel and started hammering the fish. Around 9:00, we noticed some current in the water, I had to use the trolling motor to hold us over the schools of fish we found in the channel and as the day progressed, there was more and more current. The fish got even more aggressive as the current in the channel increased. The best spot of the day was where the current hit the main waterway and created circular water movement where the surface scum, and weeds would rotate around. Underneath the scum were schools of decent size stripers moving up and down the rip. Like tides in the delta, fishing in the Forebay especially in the summer (low water) has a lot to do with where the water is coming in–the pumps from the delta, or the Dam, or both. The fish are up against the weeds and shores in the morning, and move to deeper water when it gets hot. They seem to seek areas with the most current and turbulence where the current turns, or where it hits a weed edge. We caught fish continuously all day long and left at 3:30 when the wind made it hard to hold the boat. The schools of fish in the channel were bigger than the other parts of the lake at around 16-21 inches. We ended the day well over 50 fish combined. One good fish that I hooked near the boat came up with at least 20 other fish the same size around it. We caught fish deep most of the day using heavy lines. It was a great day and it was better fishing with Ken.

One thought on “The Forebay is HOT…still”