Ain’t tech grand. With the wonders of streaming technology, I can now do two of my favorite things at the same time– Fish for Stripers and watch College football at the SAME TIME. No TIVO or VCR or people who tell you the score before you watch the game.  There something much more fun about watching the Oregon Ducks score another touchdown while setting up on a striper. 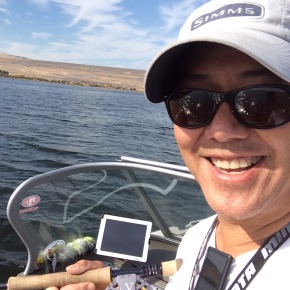 I got to the lake relatively early today around 7:30 because my niece told me there was a big Renaissance Fair at Casa De Fruta which was on the way up to the lake. It didn’t matter. There was no traffic at all on the way up. When I got to the lake, there were already a dozen boats out and ten of them looked like flyfishermen. Also there were lots of tubes in the water. I wonder if the local fly shops were having a fishout. On the way in, I noticed a bunch of boats and tubes around the islands and I looked out at Mederios with binocs and noticed a few off the rock wall and flats so I decided to head for the channel around check #1 (the bridge). I didn’t see anyone fishing the channel at all. As soon as I got to the cut channel adjacent to the park entrance, I metered and hooked a bunch of fish — mainly dinks but some nice ones also. The weed are thick and schools of minnows can be seen busting the surface right at the edge. The dinks are cleaning up on them and I also noticed some eating damsel flies and nymphs. I cleaned one at the end of the day that was stuffed with Damsel Flies. Last weeks 8 pounder kept me hoping with each cast but none of the big ones I saw on the meter were eating today. The water temp was really high at 82 degrees but I am sure the temperature is lower on the bottom and thats were most the fish were all day long. I experimented with some lines today. I think the Rio Outbound Shorts–the custom, the floating, intermediate and t-14 shooting heads are the best lines for getting out and down but I still can’t seem to get the same feel as Mono and Leadcore Shooting heads. Today I tried out a T14 shooting head with 50lb OPST SP Lazar Line and I really like it a lot. The shooting line shoots out of the rod like a LAZER and it has very little memory at all temps, its strong, it floats and best of all it doesn’t STREACH. The Spey fishermen at the Caddis Fly Shop in Oregon turned me on to this stuff and it casts a mile with a head. The 30 lb test is great for casting but its hard to strip and grip on the set. I am a fan of the biggest diameter shooting line you can get in slick mono types so you have something to grab when you don’t want line slipping through your grip. The 50lb shooting line is very comfortable to strip and grip and it almost casts as far. I think I am going to really use an 8wgt setup on the delta in a couple weeks.

My buddy Ken, calls me up around 11 am just to be sure I wasn’t doing anything foolish in the boat when the Ducks went down 7 points.  Ken is a rabid Nebraska Fan and was wondering if I was fishing the forebay today since he was heading down to Fresno to catch the Nebraska game.  I told him to call and honk when he got close,  and sure enough,  around 3:30pm  we spotted each other as he was driving to Fresno across the 152 Bridge.    That can only happen when college football is important to you.   Nebraska 55 – Bulldogs 19.

I managed to catch 28 fish today with only half a dozen over 18 inches. I started watching the game from the boat on my iPad using the Xfinity TVGo app that streams PAC12 football. I use the Slingbox app to stream the 49rs games. I checked my WIFI usage from 11am to 3:00pm and I used about 3 gigs of bandwidth. I think its worth it considering it better than a 50 yard line seat to me. The Oregon Ducks fell behind in the first quarter but Mariota stepped it up and after six scoring drives put them away 48-14. In the second quarter, he rushed one touchdown by diving 6 feet through the air over a tackler landing on his back in the end zone. The last time I saw anything like that is when Jahvid Best flew into the CAL enzone landing on his head and back. He suffered a concusion that ended his season in 2009 .  It was an awesome play though and Mariota luckly didn’t get hurt. 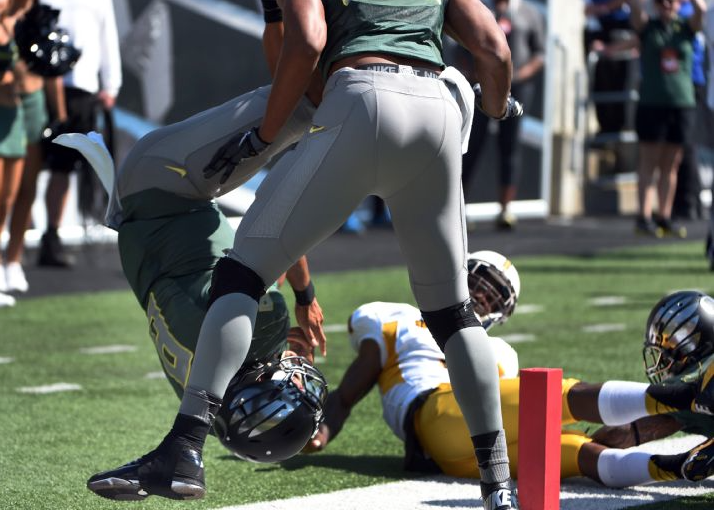