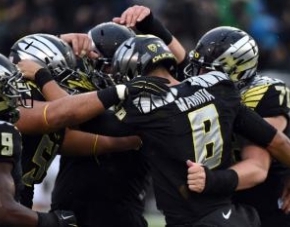 After yesterdays sensational route of Stanford and the number 4 seed Ole Miss loosing to Auburn to become a two loss team, the Oregon Ducks should be now in playoff position at number 4.  Mariotta may have cemented his bid for the Heisman and is the best football player in the nation.   The offensive and defensive lines look like than can take on the likes of Florida State and Auburn. .  I hope it plays out like the Wild Card effect on Giants Baseball.  If they make it to the final four,   its an even playing field and any motivated team can win. There are only three more games left on the schedule – Utah, Colorado and Oregon State. Utah will be the toughest and its possible that Oregon State could be tough. No time to take it easy.

Cal beat Oregon State yesterday 44-31 after loosing to them 8 years in a row.  Good ole CAL could get Bowl Eligible this year if they keep it up-just one more “W”.   Its hard to believe that a year after their last place PAC12  performance  that they are ranked fourth in the nation in passing yards this year, averaging 371.5 yards a game. Im betting the AXE will come back to CAL this year!   Beat Standford.