I almost went fishing this morning but this week at the office was brutal after the Thansgiving holiday and I was pretty tired Saturday Morning after a long week and cutting down two christmas trees the day before.   I decided to drive up to the Menlo Park VA and visit  Nick my father in law with Gina.   Nick is turning 100 this February and lives at the Menlo Park VA.  I also checked out the Fly Tying Day at Califonria Fly Shop. I sat down with Dan Blanton and talked about his boat insurance reimbursement,   Luckily for Dan , he was well insured and has nearly a brand new boat.  I watched him tie his famous flashtail clousers and talk about the fishing in the Delta and San Luis.  We talked about colors for cloudy weather and murky water.  Dan likes Black over Chartreuse with a little blue flash for murkey water.  For a guy in his 70s,  he can still tie a nice fly with agility.

Dan mentioned that the Clouser Minnow was developed by Lefty Kreh and named after Bob Clouser in 1987.   In the 40’s however, a fly tyer named Joseph Bates started tying  “Clousers”  with bead chain eyes. Brooks published a book in 1958 that describes front weighted white bucktails designed for fishing for stripers in the ocean.  He called them the Platinum and Honey Blonde flies.   I remember tying bucktail streamers with bead eyes in the style of Clousers in 1974 for Andre Puyans of Creative Sports Enterprises.    It wasn;t  till dumbell eyes were manufactured for the first time in 1994 that the Clouser evolved to what it is in Dan’s creation.  The Dumbell Eyes were manufactured by WAPSI by a guy named Tom Schmucker.    The Bead eye Blonde is in the illustrated book by Joseph Bates  Streamer Fly Tying and Fishing published in 1966. He mentions in his book the Homer Rhode Jr was using them for tarpon  in 1950’s.   Large Streamers and the evolution of Bead eyes to dumbells was a substitution on an old pattern.  The first “flashtails” were made with mylar, before the advent of scaled flash and colored Flashabou.   As new materials evolve,  fly patterns morph.  When it comes down to the effectiveness of a fly ,  its all about the use of the newest materials in the oldest of effective flies. 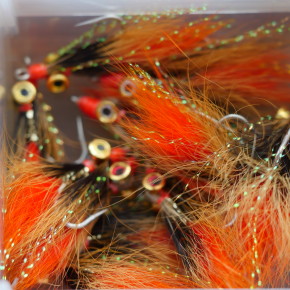 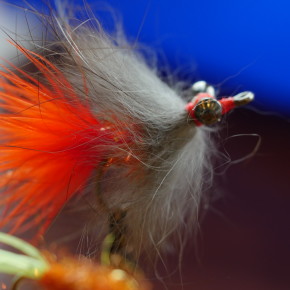 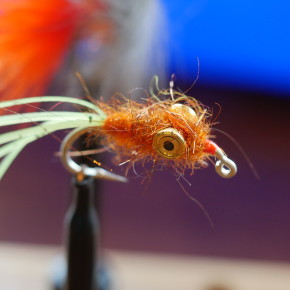 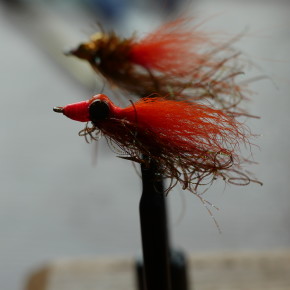 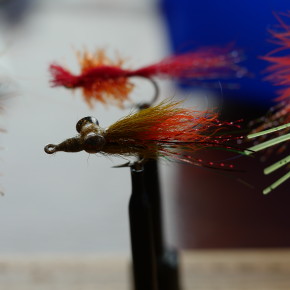 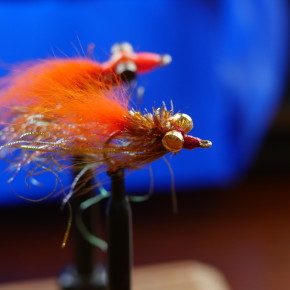 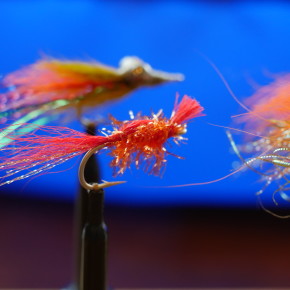 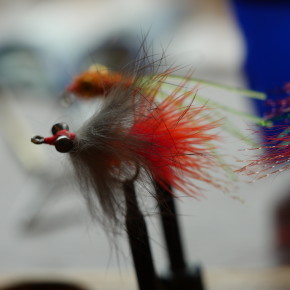 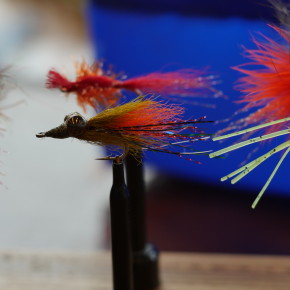 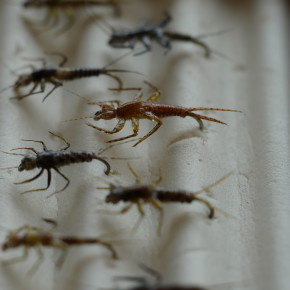 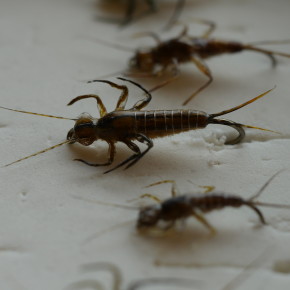 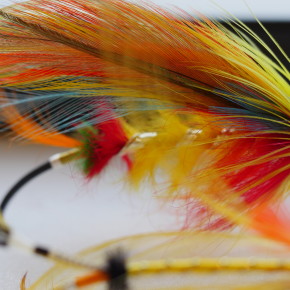 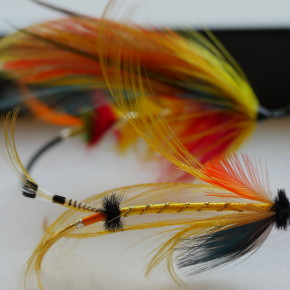 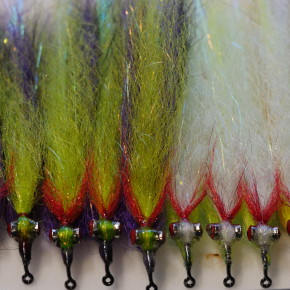 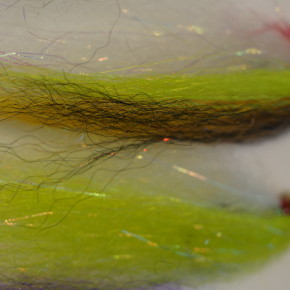 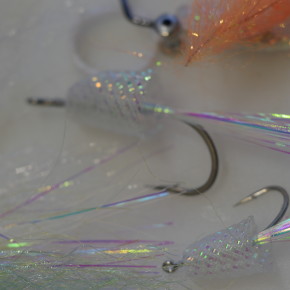 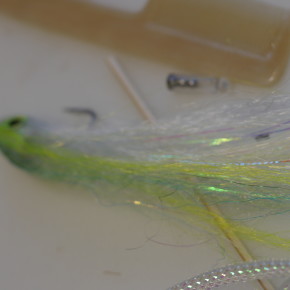 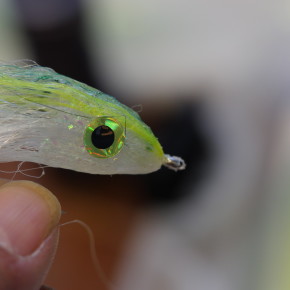 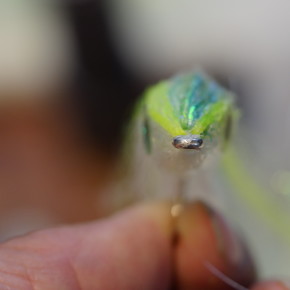 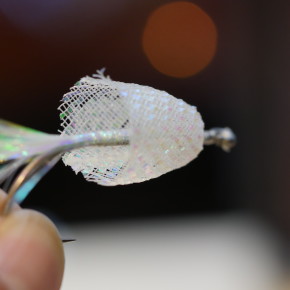 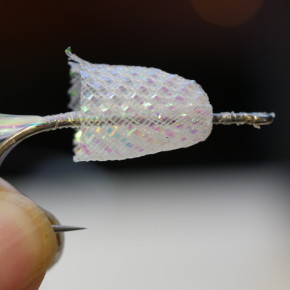 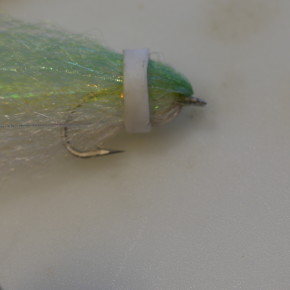 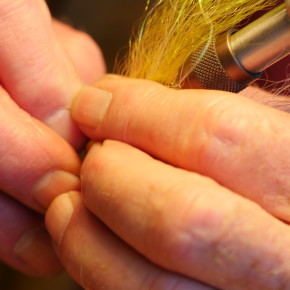 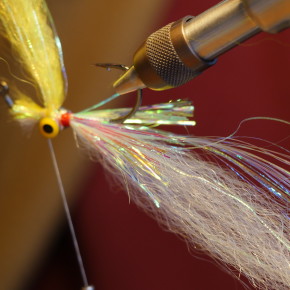 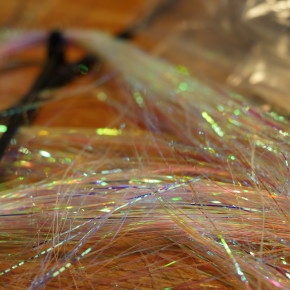 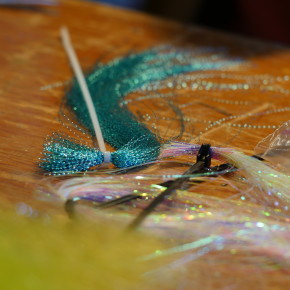 I started to research the flies I need to tie for Tismani Lodge in Bolivia.  Most people agree that you need to bring a minimum of 3 dozen flies and ideally ten dozen.   The  Ardino Deciever which is the most popular fly for Golden Dorado last about 1-2 fish. When you see pictures of the jaws on a Golden Dorado, you can understand how that happens.

It seems that almost all anglers I talk to about Tismani say the flies everyone are using  are Ardino Decievers which are a modified Deciever with Spun Deer Hair for the head.  They seem to me like they are really delicate considering the monsters that you are casting too.  The deer hair, bucktail and  schlappen make for a pretty fragile fly compared to spun wool, synthetic fibers and a colored sharpie but then I have never caught one.  In fact,  the fly tier at the California Fly Shop had not caught a Golden Dorado either but he was selling Ardino Decievers for 15 dollars a piece.   I did buy some as sample because they were pretty.   If you bought the recommended 10 dozen for a week trip, you would have to spend. $1800 on flies alone!.  That is why am starting to tie early. I think after I tie the ten dozen Im going to try to build a more durable fly with synthetics. Perhaps formulate the perfect fly for golden dorado.  The weak link however might be the hook itself.  Some people feel the less expensive hooks arent worth the savings  if it  cost you the biggest fish of your trip.   Popular hooks for the Ardino Deciever are the TMC 600s, Gamakatsu 600 SP, Owner AKI, Gamakatsu SC15 or Daiichi X point 452.  The cheapest ones are the AKIs.  They are on there way from EBAY.  Dorado flies seem deceptively simple.  I need a totally synthetic durable fly that has a ton of black mixed with purple, red , yellow and orange that has action,   pushes water,  silhoettes a 5-8 inch baitfish,  and that’s easy to cast,   That cant be that hard or can it?

Stanford beat USC pretty decisively and I think the have the next Heisman Trophy winner in McCaffery. Unfortunately Clemson beat North Carolina, and  Alabama beat Florida which means Stanford will not go to the playoff and Oregon will not go to the Rose Bowl.  Seems like it was meant to be but the Pac 12 got screwed by one crooked ref who called an offside foul on a recovered onside kick by North Carolina that would have put them in great position to win in the last minute and a half of the game.    The fix is in and the whole world knows it.  It wasn’t even close!  The bottom ref is right on the line and threw the flag late.   Unbeliveable in a Championship game….

Looks like the bowl games are shaping up now.  Cal is going to the Armed Forces Bowl aginst Air Force on Dec 29th  Northwestern will face Tennesee in the Outback Bowl Friday Jan 1 2016 and Oregon will go to the Alamo Bowl on January 2nd to play the TCU Horned Frogs  (don’t ducks eat frogs?) .  Of course Standford will be in the Rose bowl playing Iowa on Jan 1.

I heard form Ken Oda who fished the Bay of Pigs with some friends this morning.   He got 7 fish today from 4-6 lbs and witnessed fish blowing up on Smelt on top. His friends picked up a couple 6 pounders also. If the rains is not too bad tomorrow,  I may go out then or monday.

Last week in Oregon browsing the Caddis Fly Shop, I had a chance to cast  8 wgt and 10 wgt Echo Prime Rods.  My one piece Helios 2 is still my favorite striper rod but the one piece Echo Prime 8 wgt , a slightly faster rod,  is a close second.  It’s funny how Echo does not post the wgts of there prime rods since I think this is one of the reasons you should buy a one piece.    I weighed them  and here is the goods…

No wonder the bite was slow… #covidbored #remini