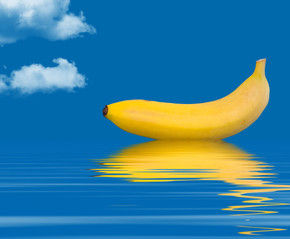 I shouldn’t have tempted fate Saturday morning. Early at the Breakfast table before heading out to the Forebay, my daughter offered me a bannana. I told her how banannas are bad luck for fishermen and when she asked me why, I explained to here about certain amino acids that fish react too that might be the reason. As a nutritionist she said “that sounds ridiculous” and I accepted the bannana and ate it. That was the beginning of a long day.

The wind and solonar tables were ideal, I got to the lake at 8:00am and there were lots of boats out. The wind was blowing about 13 mph NE and I felt like it would go completely flat by 9:00 am which it did. I headed out to the deep water to look for last weeks schools of fish and found them but like last week, they were tight lipped. I had lots of short hits and had a hard time hooking even the smallest stripers. this time, fishing alone, I went through a dozen flies-small ones, different colors and patterns, small trailer flies and pulse disks. The Midges were thick and I had to put the buff on to keep from inhaling them.  I finally hooked a good one, and after a long fight, I lost it right at the boat. It felt like the fish were very casually hitting the fly if it was right in front of them,  I got a couple sinks just letting the fly sit under the boat with no movement till the leader moved.  I had lots of weak short hits with hardly any suicide grabs and it many  casts for a few small ones. I tried the weed lines in the highway trench where Vaughn got them last week and picked up a coupld dinks but no keepers even though they seemed to be around on the sonar. There were lots of larger fish on the sonar all day long but despite the pressence of fish, I only landed 6 really small ones and lost the only decent one I hooked-a pretty dismal performance. Late in the day I decided to try the rock wall at Maderos. The water skiers and jet skiers come out on Saturdays around noon and its a mess in the deep water. I fished the wall and picked up some more dinks and decided to run and gun one more spot before calling it a day. I put my rod in the LMB like I have hundreds of times before, hooked the fly on the foam basket and took off. After traveling about 300 yards to the spot, I got up and the rod was gone. The next hour I searched for it back and forth hopeing that all the line had been pulled out of the basket and maybe the rod would float a bit from the cork handle, but it was underwater and my not fully recovered eyes werent sharp enought to see below the weeds and surface crap. The rod was an 8wgt Helios 2 with a Vanquish 7/8 .   I have finally reconciled it as a loss–a donation to the gods. If anyone finds it–please keep it, use it and enjoy it.  It’s somewhere in the top half of the Mederious Trench in 15-20 feet of water. Expensive lesson learned. 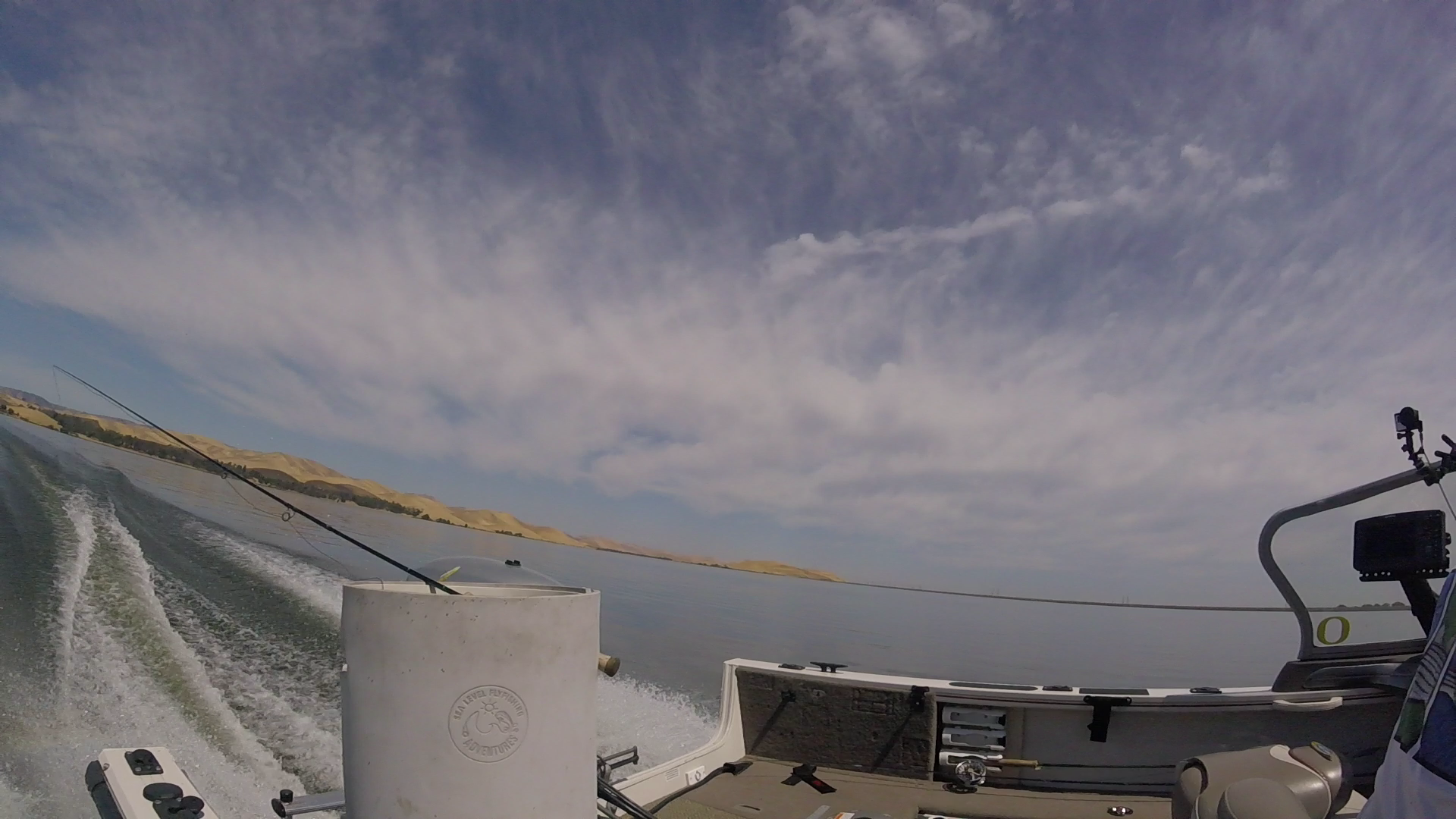 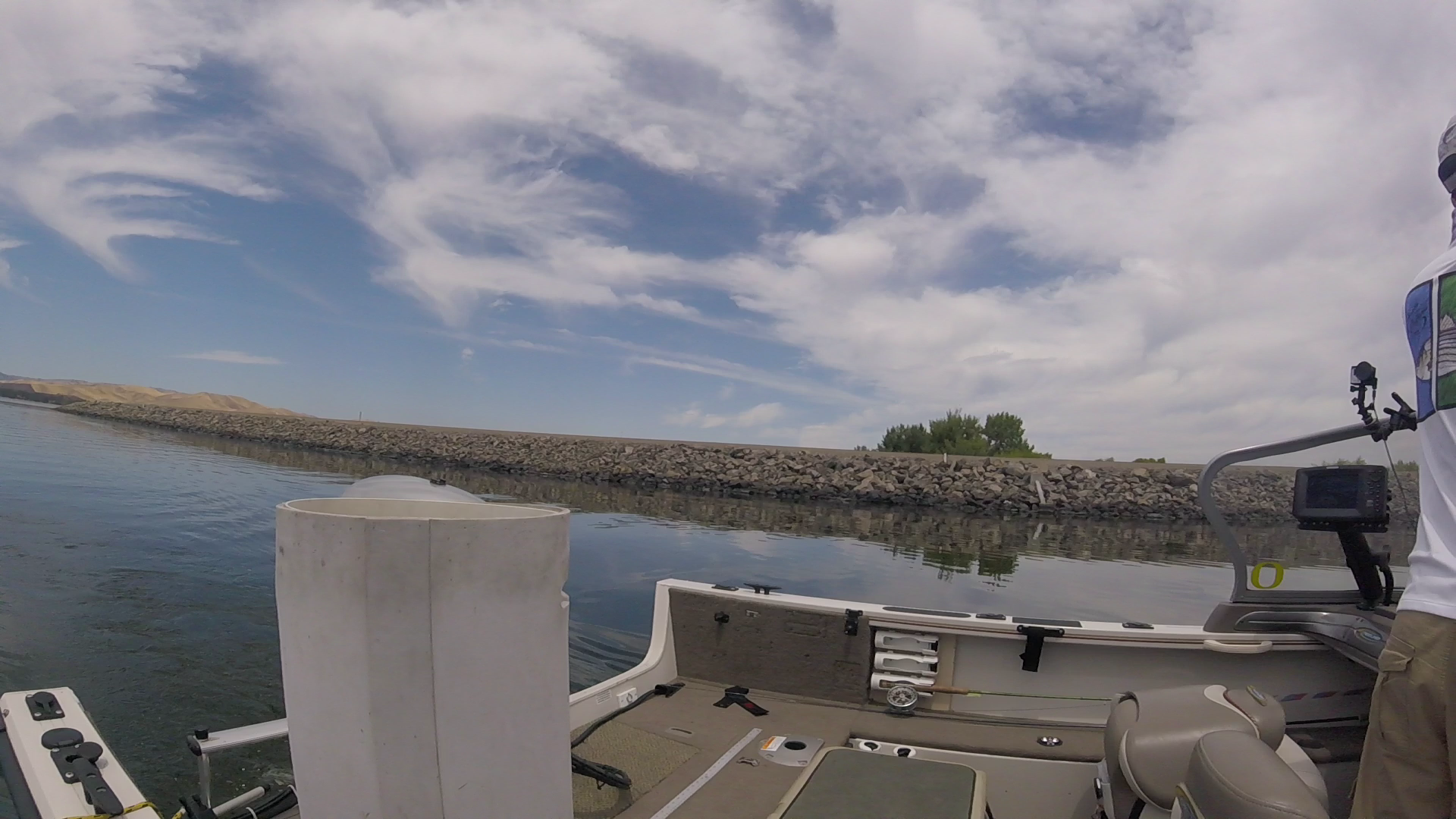 I fished a bit more after searching for an hour for the missing rod to cheer myself up, but the fish were not co-operating and the water skiiers were getting more irritating. Almost exactly a year ago, Ken Oda and I went out and put big numbers in the boat. The weeds were not as overgrown to the top as last year this time but we havent had those really hot days like last year thanks to the El Nino. I have a feeling the fish are going to start binge eating any day. I noticed that my dual 12 volt trolling batteries are showing low charge after only 5 hours on the water. I seem to remember them lasting all day with no problem. I guess its also time for a couple new batteries. Or, it could be the banana. 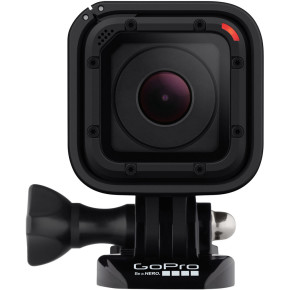 I had a chance today to try out the new GoPro Sessions camera.  A new square waterproof 10080p Camera that will loop record.  It’s a fun camera to use because you can tuck it almost anywhere.  It has two MIcs front and back,  and it doesn’t need to go into a case to be waterproof.   It is a bit awkward to setup up since you need to pair it with your smartp[hone to configure it but once it is configured,  its a one push of the button on and one push off.   Its not as quick response as the Gopro 3/4s when it comes to closing a loop recording and then starting it again, but it is easier to place in unique places because of its micro size.  I have heard that the 1080p is not as crisp as its predecessors,  but you can hardly tell the difference between the two cameras in the video when there is a lot of light.   I think it will be very handy in fishing videos.

I took the long drive home talking with Mark in Oregon which made me feel better about loosing a thousand dollar outfit to stupid.  Mark is getting back into Rock Climbing and practicing hard routes at the UofO Rec Center on campus. When I got home, It was time to complete work on migrating this blog and ten others wordpress blogs to an updated Godaddy server–a project that I started a week ago. Just moving files from one server to another via FTP took three days! I got GOdaddy Support on the phone and in a minute, we somehow managed to screw something up and erase the entire contents of the new server. Yikes. I spent the rest of the evening building and restoring backup files to the new web hosting server to late in the night and this morning started rebuilding everthing. What a day–no fish, lost rod, crashed server. I was gonig to fish today but I think I need to go to church first.

2 thoughts on “a bad day, no bananas ever again.”