After two days of rain and more on the way,  I took the opportunity today to fish the only dry day of the week.   I had fished this kind of weather in the past with great success and I had a feeling that I was due for a big fish on the lake today.    I got out to my favorite spot on the San Luis Reservoir at 7:00.  The winds were blowing around 11 and there were some decent rollers pushing me toward the dam.  The wind started to build around 10:00 and I could see white caps across the lake and the yellow light going. Not a bite in the Bay of pigs and even tried trolling a deep fly for awhile.   At 10:30,  I decided to go over to the forebay and pull some lips. Fishing all day without a hit or a dink is a drag and I can catch numbers on the forebay this time of year almost at will. To catch 20 lbrs in San Luis Reservoir on Flies,  the stars need to be aligned and you need to put in your hours of casting. 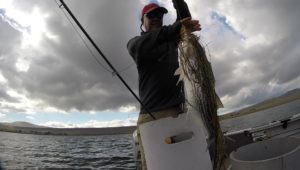 The forebay was flat and there were 10 boats out on the forebay opposed to two at Basalt launch on the lake.   I ran to the 156 bridge channel and fished the flats on both sides of the channel.  The flats have been very productive this month and I think the majority of stripers, at least the bigger ones,  are hanging around the last remnant of the weed carpet in the flats.  The bigger fish I caught were around weeds.    The fish averaged larger today than last week and they were aggressive often following the flies to the boat.  If I wasn’t getting bumped within 5 casts,  I moved 50 feet and cast in a circle again checking the 360 sonar for some obvious weed patches.    The fishing was wide open on the flats and I ended the day with over 30 fish with half being over 18 inches.   There is an art to fishing the flats.  I used a t-14 for half the day stripping the fly fast on  impact.   You can fish very shallow water with a t-14 if you use a neutral buoyancy fly and a faster retrieve. After tangling up some old shooting line,  I switched to my type 3 and had success if I waited a bit to let it sink.    The fish were definitely on the bottom half of the water column in 8 feet.  I would say that fishing the t-14 put my fly in the water longer than the type 3 because I didn’t have to wait for a sink and therefore was more productive.   At times, every cast would yield multiple hits or a  fish.  I practiced  using  the 360 sonar  in shallow water mode setting the range to 50 feet with high contrast and sensitivity.   The trick is to anchor and see what changes on the screen .   What changes on the sonar is fish and not weeds.  The fishing can go from hot to cold pretty fast  on the flats which suggests the fish move around.   Just moving 50 feet can change your luck quickly.   If you see birds sitting in the water and its slow,  motor over to them and fish that area.    I haven’t gone wrong yet chasing sitting birds on the flats.  Today’s best depth was 8 feet with weeds.

Speaking of shooting line,  I spent a day on the casting ponds with Luke Sing, playing around with shooting heads.  I met Luke at Bass Pro Shop where he works in the fly fishing department.   Luke also teaches shooting head casting for the San Jose Flycasters and fishes the surf with Mark Won and Jerry Wang having worked at NASA with them.   What a great guy and caster he is.   We remenisced about our mutal recently departed friend Ed Hamada and casted a custom two handed rod that he made for Luke  20 years ago for the surf.  What a gun and beautifull build.   Ed designed two handed rods for the surf years before they were comonly used for the surf.   It inspired me to purchase an Echo Boost Beach   which is a 12 foot 2 inch rod developed for Overhead Surf Casting,  Stripers in the Delta and Pyramid lake fishing.   I will do a blog post on it as soon as I test it.   When the conversation came to shooting lines,   The topic of weather expensive shooting lines by OPST, Frog Hair, Rio and Airflow were really any better than Berkley 50lb Big Game mono.   After casting the cheap stuff,  I have to agree that the Berkley Big Game is so close to the expensive stuff that its actually cheaper to change it every month than to keep expensive  running line from kinking after a year of use.   I do like the transition section on Gripshooter however but Ive got pretty good at stripping t-14 short of the tip top and getting it in the air for a good backcast with a single motion while haveing enough mono out to double haul.  Im a believer in the one backcast cast. If given the choice of one less backcast or 5 more feet of cast,  I would take one less backcast because the fly is in the water longer.  But,  doing both is even better!   The longer you have a fly moving in the water at the write depth,  the more fish you catch and the more likely you can catch multiple fish out of a moving school. It’s as simple as that if you want to increase your chances. Become a casting machine!

” I wanted to share some ideas formed over the last few seasons. I get a bit bummed out when water temps in my favorite striper haunts get in the 44 to 47 range.So I have been playing around with “I” lines and full floating lines in recent years as a way to fish cold water effectively.

A good “I” line like the Rio outbound short can give a fisherman a lot of options when the water is cold.You can change leader length and the weight or lack of weight in your fly to fish the whole water colum very effectively.
With a long leader and a weighted clouser for example you can slowly strip and tease fish in water to about 12 feet or so 8 feet is optimum for me as I am an impatient guy. I know that Captain Mike Costello has been doing a lot of this with incredible success over the last several years. Shortening the leader for shallower water will allow the same effectiveness.You can fish the shallower stuff with an unweighted fly very effectively as well. When needing moderate weight in the fly I will often use a polycarbonate rattle as my weighting system.Over the years a rattle has proven very effective for me.  In very shallow water, 2 to 4 feet I often use a floating line and a longer leader so as to be able to hover the fly for as long as possible. I will alter the weight used in the fly so that it stays where I want for as long as it takes to get the fish to eat.A few things to consider,if you find fish in the shallower water they are typically there for the right reason, they want to eat.

About flies for the colder water, I really like flies that move, slide, breath etc.I feel like movement is king in cold water.When a fish has some time to study a fly before deciding to snack it down ,it needs to look alive.When fishing slowly because of the cold water this is most often the case. This year it is especially true because of the extremely clear water throughout the delta and river systems.

I am hoping that some of these ideas are helpful to some of you and please understand that these are just my opinions and experiences and I am no expert at any of it.

Food for thought fishing the shallows……