With the election of Trump, some of the smaller proposition results have flown under the radar as to the long term impact to fishing as we know it in the California Delta  and ocean.

Proposition 53 -The California Voter Approval Requirement for Revenue Bonds above $2 Billion Initiative- would have given Northern California a say over the Jerry Brown Delta Water diversion tunnels project. It was defeated by less than 1% of the vote – aprox 450,000 votes- out of a California population of 38 milllion. The Califonria Delta Estuary is already facing the  largest extinction event on the planet since the dinosaurs  and the diversion of more water by the Tunnels Project will spell the end of the Delta as we know it. Large-scale water diversion in the Bay’s watershed severely limits the amount of fresh water that reaches the Bay and alters the timing of that flow. Inflow to the Bay from its Central Valley watershed now averages less than half of what it would be without diversions; in some years just one-third of the runoff makes it to the Bay. The result is a nearly permanent drought for the Bay’s fish, wildlife, and their habitats. This radical alteration creates severe consequences for the Bay and marine ecosystems – and Bay Area residents pay the price.

So little water is flowing from the rivers that feed the estuary, which includes the Sacramento-San Joaquin River Delta, Suisun Marsh and the bay, that its ecosystem is collapsing.  According to Peter Moyle,  a Fisheries Biologist from UCD and probably the most knowledgeable human alive when it comes to  understanding the Delta,  of the  roughly 120 native freshwater fish species in California, “over 80 percent of those are faced with extinction by the end of the century if current trends continue.”

Im afraid that the defeat of Prop 53 marks the loss of a long battle to save the Delta.  It’s over and we have lost. Fish and enjoy now.   Don’t put off a trip to the Delta or the Sac if you have a chance to go.  We are looking at the good old days right now. 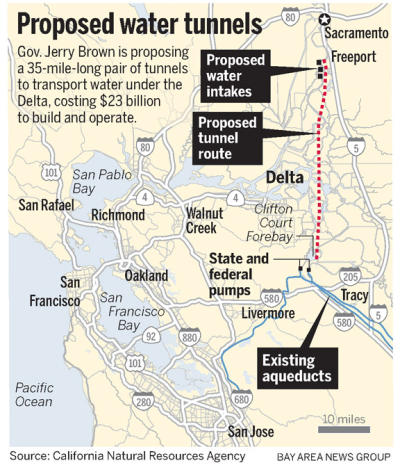