Last Monday was the best day on the lake for me this year even though I didn’t catch either of the two 12 pounders that were caught that day.   Again, today was even better than Monday for me,  and again the “big one” alluded me and chose Dan’s fly instead of mine or Ed’s.

I called the wind line at 5 this morning and the windline said the winds were over 20 mph.    I  hit the snooze alarm to wake me every half hour and every 20 minutes the winds diminished until it was nearly still at 6:30am.  I jumped out of bed at 6:30 and headed for the main lake basalt launch and zipped out to the trash racks before the Dam Nazis start patrolling.   I figured I would get a couple hours in there.   I guess they weren’t pumping or the fish were at 150 feet because I didnt see any schools of bait or fish on the sonar within casting range. There appeared to be some big schools at 150 feet around the racks.   I fished it anyways for an hour till I saw the patrol and headed over to the Bay of Pigs where I got into them in the shallows like last Monday.   It was non stop fishing a t-11 line in 8-12 feet of water,  I caught a dozen fish before Dan Blanton and Ed Given cruised into the Bay of Pigs.

I didn’t see a boat all morning, and when I launched at 7:30am, I was the first and only boat at Basalt.   I guess most people called the Windline and didn’t keep checking it hourly.   You can always call the main Kiosk and get a real person to tell you if the lake is blowing.  The Kiosk phone number at Basalt is (209) 827-6846.  Around 11 I noticed boat coming up behind me in the BOP.  Dan told me on Wednesday that he and Ed Given were planning of fishing the lake today but when I didnt see them at the racks early morning, I thought they bailed. Dan told me they fished the west end and got into some busting schools of decent fish.   He cruised up beside me and we started to chat,  and cast flies at each others boats.   I was still catching fish as we chatted when he hooked what seemed to be a bigger fish.   After a short battle, out of the green toxic algae, he brought a fat 18 lb striper to the boat!   Sometimes its better to be lucky than persistent.   It was fun to watch and I got some of the action on film.   I did not think the fish was that big until he almost had it landed. Maybe the algae was lowering the oxygen content of the water.  I blew it.  It would have been priceless to launch the drone and record the whole fight from directly above.   Oh well.  I should have thought of it. Instead I turned my go pros towards his boat and took some vids with the Lumix.

After the Monster was landed, booked, and revived, Dan left for the west side.   I continued to fish the cove and picked up another dozen fish in and around the Bay. I counted 25 fish with 8 keepers for the day. I brought one home for my mom and cooked it for her. 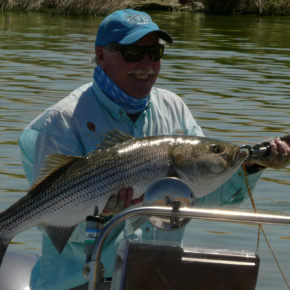 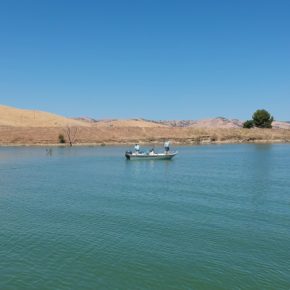 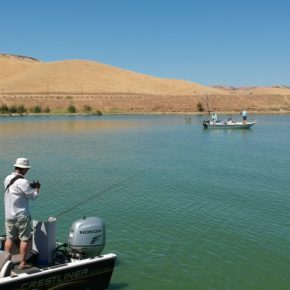 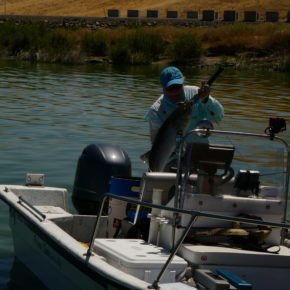 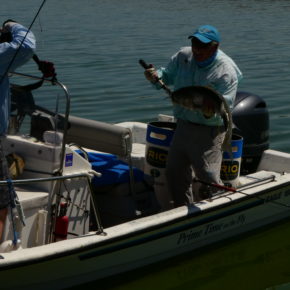 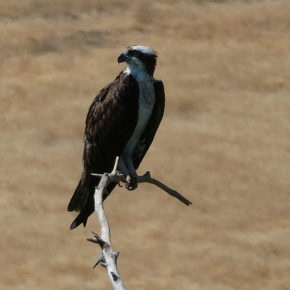