(July 15, 2017)I really enjoy fishing with Dorothy. Todays session was no exception. Reports from friends were pretty good the day before except for the unpredictability of the wind. It seems that the conditions can go from closed to ideal in a matter of an hour. I hoped we would arrive at the lake at 6:30 to winds less than 10mph but when we arrived, the yellow lights were on and it was blowing about 15mph in the middle. We launched at the bumpy Basalt launch in an NE wind and carefully bounced are way to the Bay of Pigs. We got into them immediately and found most the good fish pushed right to the shoreline in 5-8 feet of water. I got the t-11 out and we caught plenty of fish this way most of the day. Most our fish were dinks but Dorothy enjoyed the constant action. We put over 40 fish in the boat, but that isn’t that impressive considering 3/4 of them were under 12 inches. Of the nicer fish over 12 inches, most were right a 17.5 inches and we only caught two keepers. Many of the bigger fish seemed to hit in deeper water with longer pauses but there are definitely schools of small yearling stripers feeding on large schools on one inch size minnows. Last week Dan Blanton caught an 18 lb fish while Ed Given and I were catching dinks in the BOP. I think the bigger fish also hang with the dinks either to eat them or locate minnows. We could see clouds of small one inch delta smelt in the grass ;however, one of the bigger fish spit out three fat threadfin shad that were each 3 inches long. The bigger fish were also cruising the weedlines. 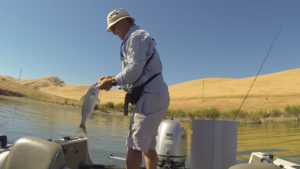 2 thoughts on “Dorothy Zinky and I on San Luis Reservoir”