When I first heard, several years ago, about an American Solar eclipse like no other in history, I thought about fish, specifically trout, and how they might react to a premature evening light and temperature drop. I pulled up a map of the “path of Totality” and noticed that it began its 1400 mph flight across the nation starting in Oregon where my son lives, and ending in South Carolina where my daughter lives. I decided a year ago to make it my mission to find the best fishing under the totality wherever it was and be there fly fishing with every camera and drone I had to film what might be the most awesome natural astronomical event I would ever witness.

I remember my last solar eclipse in 1979 when I was a Senior at UC Davis. Peering into my pinhole viewer,  It was NOT a life changing event by a long shot and I ended up late for class. The 1979 eclipse that stretched from Oregon to Greenland was lost on me because I didn’t witness the totality.   I pulled some youtube videos of past total eclipses and decided that the best place to witness my first Totality would be over ocean or flats vs mountains and trout streams. A long view of the horizon gives you an idea of how big the shadow of the moon extends. This years shadow was 70 miles across and moving over Chraeston at aound 1500 mph. The speed of the shadow varies as it goes over the US because of the relative path of the moon in relations to the Suns orbit, the the Moons orbit and the rotation of the earth.  Charleston South Carolina had all the makings of an epic film. It was perfect,   I stayed with Mia who has been after me to come and help her with her apartment, car and computers,  I had a good friend who guides there, and  Gina was anxious to return to Charleston to enjoy the eclectic food and entertainment that Charleston has to offer.   Captain Jeremy’s local knowledge of the waters under the path of totality would certainly get me an edge at filming it. 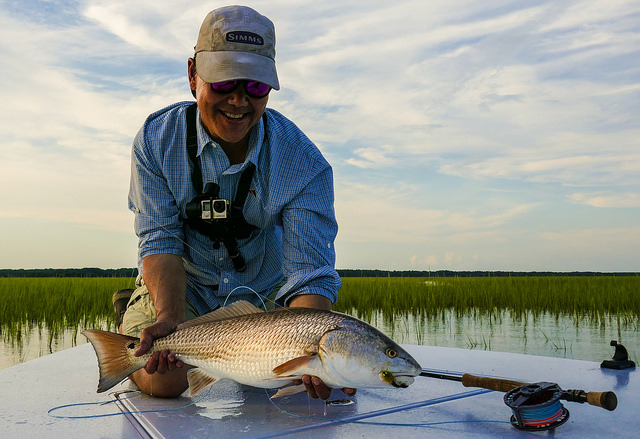 Filming and photographing a solar eclipse is much like filming fishing or a wedding. You get only one chance at a short event. The way to increase your odds of getting that perfect photo is multiple cameras at different setting and angles. Again, 4k photography was the best way to get the stills and video that I wanted. The challenge was to compensate quickly from very bright to very dark. The event only lasts 2 minutes and 33 seconds and I imagined missing the whole thing fiddling with cameras while trying to stage a shot. On YouTube and Vimeo, I researched how past eclipses had been filmed with 360 cameras, GoPros and special filters on DSLR cameras to see what the hooha was all about. The more I read, the more I realized that this event is epic and difficult to capture on film and video because of its size and scope and radical light shifts.  . Even the NASA pictures were all photoshop composites of mutliple camera angles and HDR shots. A truely natural unedited photo is a tough job considering you only have 150 seconds to pull it off and if you blow it, you wont get another chance at that location forever (375 years).

On August 21, 2017,  the tides favored the late evening and early morning.   The Solar eclipse would start at around 1:00 with first contact and end at 4:00 leaving the United States.   The totality event would start at 2;43 and last 2 minutes and 30 seconds if we were located in the center.   Charleston would witness a 1 minute 33 seconds being located at the edge of the shadow.    Since the fishing windows were in the morning and evening, we  decided to return to the marina at 11:00am ,  have a nice brunch and then head out to the center of the path of totality which was 20 minutes away around noon.     The morning launch at 5:30am went without a hitch–no crowds at all.  The marina predicted record traffic and standing room only for the event.

The previous days tides were less than predicted due to the wind direction and barometric pressure which was fluky due to the periodic thunderstorms  that were predicted for the weekend.   Even small changes in these variables can cause a tide to be an inch lower which leaves 50 sq miles of grass flats high, dry and fishless.   The morning three hour window around the 5.9 tide was awesome with a dozen shots and 7 fish to the boat.  Thunder clouds and rain on the horizon made me pessimistic that we would even be able to see the eclipse.  Gina and Mia had a spot picked out in Charleston which was 20 miles away and it looked like heavy thuderclouds had settled over the city in the morning.

The morning fishing was great.   We had many opportunities on tailing redfish from 5 to 15 pounds.  I still cant get over how cool it is to see a tail in the weeds for a split second and then look for moving grass in the area to target the fly.   The reds are not automatic when you get a fly in front of them.   Some are as finiky and spooky as a trout in a chalk stream.   Others hit the fly so fast and hard that it takes every bit of self control not to trout strike them.   On a few occasions,  the reds would rush the fly and eat it as soon as it hit the water like a dorado.   Jeremy had me tie bunny flies with stiff weed guards and light bead eyes in size 1.   The reds feed on crabs and shrimp in the weeds.   Olive was the color of the day.    Fighting reds in weeds requires a high and tight line.  The average cast was about 50-75 feet.   I started the day with a redfish Rio Taper but switched to a Wulf Ambush Taper (a heavy short floating head like a  Rio OBS).    It was easier for me to cast faster with the shorter tapers.  The longer belly lines were harder for me to cast accurately in the breeze and also difficult to recast to a moving fish.  The big flies didn’t come out of the grass as easy with the long bellied lines on the recast.   In addition,  I used 7 feet of straight 20 lb test Segar Flouro like I do for stripers in San Luis.

We ate lunch at “The Obstinate Daughter“–one of my favorite local eateries. The Obstinate Daughter, is an homage to the rich Revolutionary War history of Sullivan’s Island. On June 28, 1776, under the command of Colonel William Moultrie, the defenders of Fort Sullivan foiled the British fleet’s attempt to capture the city of Charleston in the Battle of Sullivan’s Island. This first American Patriots victory inspired a London political cartoon of the defiant defenders of Charleston:  “Miss Carolina Sulivan, one of the obstinate daughters of America, 1776”.    Surprisingly,  there were no crowds at the restaurant of coffee shop.  We ate a great leisurely lunch and headed back to the marina at noon.

The trip out from the marina resembled a 4th of July Parade.    Charleston’s finest boats were on display with people ready to party.   It looked like Dunkirk.   Ive never seen chop like that before but Jeremy’s Hells Bay Skiff got us quickly around the parade and we got out in front and well beyond the throng of observation boats to an area of flats that only a shallow draft flats boat could get to.   We found am uncrowded spot amoungst the oyster beds  around 1:00 pm  but the sky was so cloudy that I started to panic.   Patches of blue sky would periodically allow us to glimpse the eclipse with eclipse glasses but as soon as the cloud cover would pass over the sun,  the glasses became useless.  One advantage of the cloud cover was one could clearly see the  progression of the eclipse filtered through the clouds without glasses.     At 2:15,  I made a decision to chase  (get under)  a large hole in the clouds for the totality event.   Jeremy got on the motor and we sped to a spot a quarter mile south that we guessed would be under the hole in the sky for the totality.   As soon as we anchored,  we got both drones in the air.  Jeremy’s Phantom 4 on full auto exposure was flown 400 feet directly over us pointing down.   The DJI Mavic was placed 45 degrees behind us towards the sun to capture the Horizon and boat under the sun.   I set up a Lumix GH5 with a 300mm lens on a Zhiyun-Tech Crane Gimbal Stabilizer tripod  get a full frame shot of the sun.   I  mounted a Nikon Keymission 360 VR camera in the center of the poling platform and two Gopro cameras set at 4k on each side.  Finally I put another gopro on a tripod pointing up at the sun from behind us.   All the cameras were started at 2:30 and we prayed for the clouds to open up as lightning  continued to strike  around us in the thunderclouds that encircled the horizon. 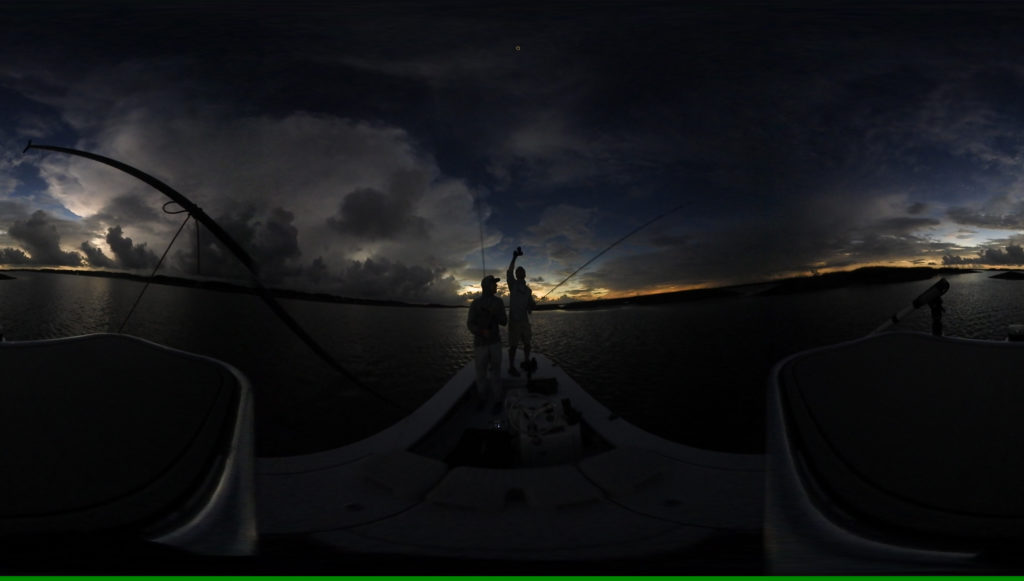 Luck on our side,  the clouds parted and the show began at  2:40pm.  The light grew eerily dim and the shadows got sharp.  The thunder clouds added  dark contrast to the horizon as the light dimmed and it all felt unreal- like standing on the set of a sci-fi space movie on a different planet.   I felt anxious as the diamond ring appeared and the sky grew dark,   All I could say is “oh my god. oh my god…”  as the lights went out on earth.  It was the most awesome thing I have ever seen and I will never not get goosebumps when I recall it with film and photo even though it is not the same as witnessing it.   I may just plan fishing trips around the even for the rest of my life.  I think the next one in 7 years it looks like it might go over El Salto Reservoir in Mexico.  It is an awesome Bass Fishing Venue.   You heard it here first… 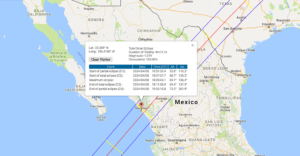