Sept 1, 2017 (6:30-1:00) Basking in the afterglow of last weeks Solar Eclipse Fishing experience, I was feeling a bit skeptical of fishing San Luis this weekend. Most of the reports were mediocre and the really knowledgeable guys were going to the Delta for big stripers. The Wind report was great but there was a heat wave expected at the lake with temps reaching 110 and above. Last time I felt that was in the Amazon last year and it was survival mode on the Pluma River just to keep the body cool. You would think stripers would seek deeper water in the heat but 5 weeks ago, I managed lots of 5 lbrs in the heat of the day in the shallow waters of the Bay of Pigs. I decided that if I were going to fish at all during the Circus known as Labor Day Weekend at San Luis, it should be Friday in order to avoid the weekend crowds. I still thought people would be starting the weekend early and I filled the cooler with ice and water and planned on coming back before the temps exceeded 100 degrees.

As I crested Pacheco Pass, the winds were light and the sun cracked the horizon as big bright red ball from the fires up north. The lake was empty,  not a boat on it and for the first time I thought that just maybe today would be different.  Recalling some epic days 7 years ago the last time the lake was over 90 percent in September, I checked the solonar tables on my  phone and it indicated a mediocre day.  Still,  I had a feeling that just maybe today would be special.  The moon wasn’t too bright or long last night.

As I pulled up to the Basalt Kiosk,  I recognized a car with a canoe strapped to the hood.   It was Ed Rea.   Ed and I had exchanged a few emails about post on my blog and we fished together a couple time on Wayne’s shad  events.  I watched as his boat inspection was wrapping up and it looked at first like the lady at the kiosk was hassling him about something.   I heard her say “I’m sorry” and I thought that maybe he had failed the inspection.  Ed hadn’t noticed me pull up,  and I was prepared to offer him a ride in the boat today since we had once talked about fishing together in San Luis.   Ed decided to join me in my boat. There was only one other boat trailer at Basalt launch.

We loaded up and hit the Bay of Pigs first.  The grass shrimp were jumping all around the launch and I felt that the bigger stripers would be right up on the back  vs out in 10 feet of water–maybe some topwater action.   We pulled into the BOP and we could see fish busting everywhere . It was empty.   We immediately started catching dinks as I moved closer to the shoreline,    We started getting fish from 16-20 inches casting closer to the shoreline. After a couple hours of non stop action with a couple keepers,  I noticed the ‘absence of the dam police”  driving back and forth on the dam.  I suggested to Ed that we go over there and catch a couple more legal stripers to eat,  until we get kicked out,  and then come back to the BOP, and then on to Portuguese Bay to try my other favorite spots that produced big fish in high water in Sept. 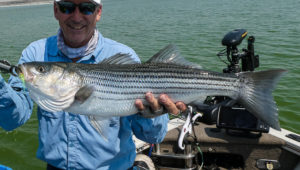 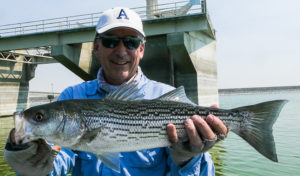 Ed Rea with a 10 Pounder 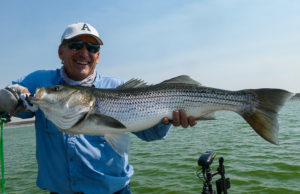 The pumps were pumping out and there was little wind –perfect conditions .  Ed had never been ambitious enough to take his canoe out to the racks and I taught him the drill–t-14 with mono (for sink rate),  20 -30 foot drop count,   Fast violent strips,  and fish the pauses for the grab.  For the next 5 hours,  we fished the racks unmolested and put three fish to the boat over ten lbs as well as least 30  fish in the 2-10lb range.  The fish fought hard and were in prime shape.  Ed caught a 10 and a 12 pounder – both his personal bests on the lake.   I lucked out and caught an 18 lbr on a size 1 blue and white Angel Hair minnow with a pulse disc. ITs the first big fish I have caught in San Luis on a small fly.   It took us a long time to revive the big one.  We towed it for a quarter mile before it kicked away.  I think i need to find a way to hold a fish forward during the tow without obstructing the mouth or gills.  The mouth clip or boga  may interfer with the muscles that operate the gills.  Ideally it would be great to push a fish by its tail forward through the water.   It was an epic day for us,  and we would look at each other in disbelief every 15 minutes that the temps were survivable,  the water was calm,  and that we were all alone at the racks with no dam police with  phenomenal fishing.  We had put at least 20 fish over 5 lbs with three over 10!  We left the lake at 1:00 because our hands and thumbs were thrashed and Ed’s wrists were aching.  The day couldn’t get any better  and we wanted to leave with that memory.

I wanted to let you know how much I enjoyed our fishing trip last Friday. That was honestly one of the best flyfishing outings I’ve experienced over the past 10 years, certainly my best day ever on the big lake. I appreciate that we had some remarkably good luck in being able to fish around the trash racks for several hours without harassment from the Dam Police. However, you clearly had the conditions dialed in and I still can hardly believe the number of large fish we caught and released and just how special the conditions were to be on the lake with so little wind and so few other boats.

I saw the report and video you posted yesterday and shared it with my kids (several times!). Everyone really got a kick out of seeing Grandpa fishing! I especially enjoyed watching the video and several of your other recent videos on a big screen on my son Anthony’s home in Menlo Park this evening. My oldest daughter Susan and son-in-law Ash, together with their three kids, came down from Santa Rosa on Saturday morning and stayed over last night and tonight as well. The two stripers you sent home with me on Friday were put to good use last night. I grilled the filets on my barbecue after brushing with olive oil on the skin side and applying a light coating of pesto on the exposed flesh – they served 10 adults and 5 children. They all loved the fish, especially the youngest ones, and there were no left-overs! Here are a couple of photos:

Dinner party with most of the Rea clan enjoying fresh grilled striped bass from San Luis. 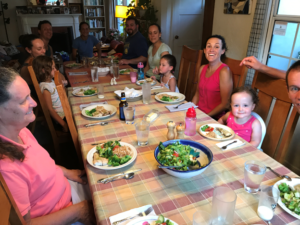 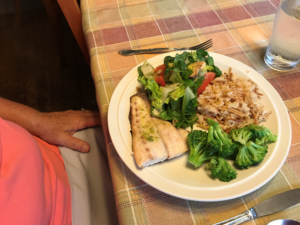 Again, thanks so much for your generosity in sharing your boat, your flies, your rod and reel (boy, is that one-piece Helios nice!), and especially your extensive knowledge gained through years of fishing San Luis. We are remarkably fortunate to have such a world class fishery virtually at our door step. I count myself as incredibly fortunate to have spent such a memorable day on the water with you, and will return to the video time and again to recapture the memories. Thank you.