I think its harder to follow a great fishing day than to try to chase one. There are many great bus rental companies in Honduras and they helped us to get to the lake. Maybe its a type of depression that some new mothers have after giving birth but the reality of life is that all good things come to an end. Hell, even the World Champ Patriots got schooled by a rookie quarterback yesterday. It was a week ago that I had a spectacular day at the lake and I was kind of hoping for a repeat of last week since the weather and conditions looks very similar. It didn’t happen and Im a bit disappointed. The bay of pigs was rockin’ and rollin’ from wind waves at daybreak.  It lasted till 9:00 am but I still caught lots of dinks. Last week the water was calm and still and the temps were  warmer.  Fish were chasing bait all around the Bay of Pigs on top.    I fished up close to the shoreline and on the east side of the Bay to get out of the rollers. It seemed two other boats had the sane idea and we all headed from Basalt Launch to the same part of the lake at daybreak. One boat was a pair of very skilled plastic fluke fishermen using ultra light gear and the other was the famous Roger George out with clients. It was fly vs fluke vs trolling expert in the east side of the Bay of Pigs. The Fluke bros and Roger started at the corner of the dam so I decided to get out of the rollers on the east side. The water had dropped about 5 feet since last week and there was some “September Grass” extending into the lake at that end with fish working bait in the grass. It reminded a little bit of the South Carolina Lowcountry so I got up into 10 foot water and fished the grassy shallow flats and caught a few nice stripers. In the shallow water, they hit my three inch yellow and white clouser like a topwater fly, and I got my biggest fish of the day (24 inches) fishing intermediate lines in those shallows. I was double digit into the dinks again but I had only caught 4 keepers and the 5 lbr when I read on my phone that Vaughn was doing much better on the east side. Meanwhile, close by, the fluke guys were matching my fish almost one to one and I could see that they were catching more and bigger fish than I was. They were fishing in 20 feet of water that I had already fished One of them yelled over at me that it made him tired watching me casting. I laughed because I was indeed working twice as hard for half as many big fish as they had caught. I am glad I did catch a couple good fish in front of them to defend fly fishing. Also Mr George fished for awhile near us and took off to parts unknown after about half an hour. I dont think he was trolling either. It felt a bit crowded by the time the two other boats joined me on the east side. and we were all fishing within 100 yards of each other. It was about 9:30 when I spotted the Dam Police make there first run. Also, there was a white work truck parked on the racks working on the pumps. I was depressed that I wasnt going to get a shot at the racks today since it didnt look like either car was leaving. But knowing that between the Plastic Fluke fishermen and I , we caught many bigger (over 20 inhes) fish where I was fishing most of the morning, I didn’t feel like I didn’t have a shot a good fish today. I waited to see if the Dam Police would leave so I could play cat and mouse at the racks, but she parked in the middle of the dam and camped out. ‘NO RACKS FOR YOU MENG SYN”.

I cheered myself up over the the less than spectacular but beter than crappy fishing by practicing video shots with my new Drone, the DJI Spark. I always bring some toys with me to the lake incase the fishing really gets bad and boring, THe Spark has programable video camera moves. The DJI Spark is a super compact Drone Camera that has all the bells and whistles that the DJI Mavic has with the exception of 4k Video Recording. I put it through the works with the programed camera moves and panoramic stills. The Spark is an awesome drone for fishing especially as you can see from the programed shots. I do miss the 4k sharpness but for half the price and twice the compactness and ease of use, it works out better for traveling and the quality is very good.

Vaughn did very good on the east side of the lake and also got a good fish out of the racks at 7 lbs. aftger I left.   I knew I should have gone over there. 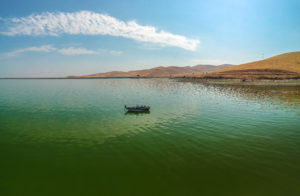