It was great seeing the regulars out on the lake today. The signs on 152 indicated some sort of police training at San Luis Lake which didn’t sound too friendly to fishing at the racks    When I pulled up ,  Carol of the Kiosk told me that search and rescue was practicing at the forebay–mostly volunteers.    There were 6 boats out when I pulled up at 7:00am.   The “regulars” were  present an optomistic–Vaughn, Wayman, Steph and Mark Baldwin.   Conditions were ideal with light wind and calm water, not too hot and the pumps were “on”  at the racks.   There was some current on the back side of the racks and I had a feeling it would be a good day and maybe another big fish day.    Steph and I hammered the racks with t-14s and picked up a dozen fish in the morning.  Half a dozen  were sub legal but a few were 20 inches or better and we didn’t see the dam police till around 11:00.  We had the racks early in the morning with no guard in site.   For a couple hours  Steph and I were alone at the racks.   The fish were deep,   deeper than last week.    It was tough fishing counting the fly down to 30 feet  and then slowly working the fly up but when the line was straight and the fly got down to the cruising fish,  it was game on at the racks again today.  The old tick tick set was happening and I ended the day with 10 bigger fish,  three over 5 lbs and one 13 pounder.  I used a small three inch flash tail clouser with a pulse disc on my one piece Helios II, Nautalis X  loaded with Rio t-14 and mono. 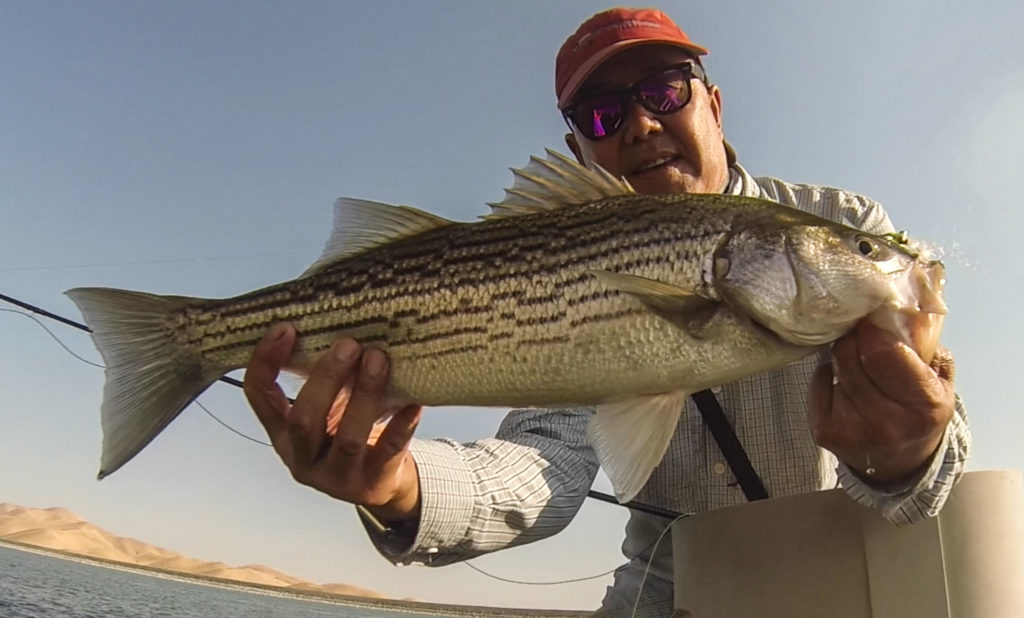 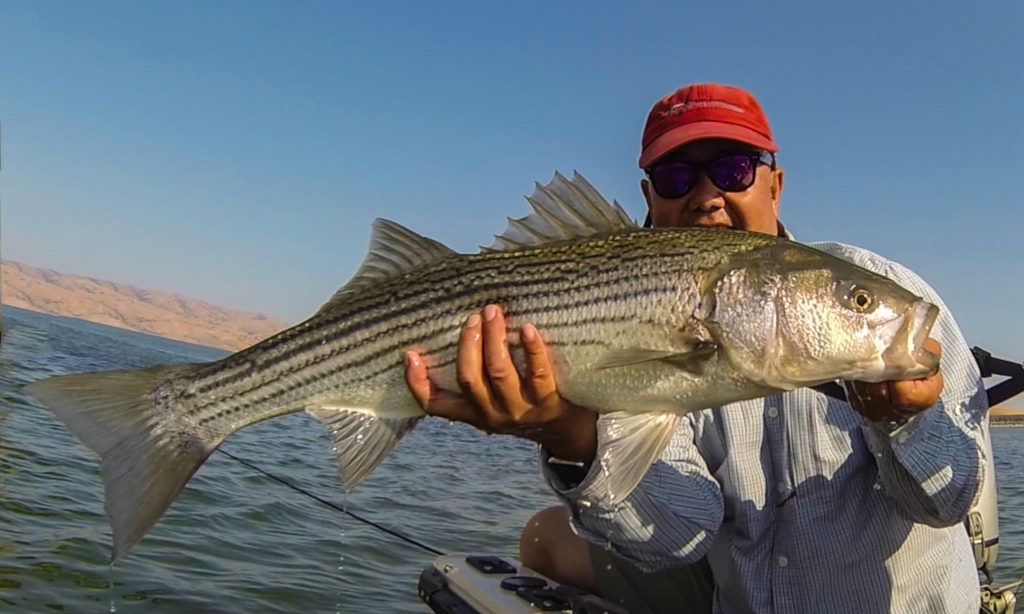 Everybody caught some fish today.  Steph ended the day around  ten from the BOP and the racks.  I saw him dredge up a good five pounder at the racks.  Mark Baldwin hooked a beast that wrapped him on the cables just as the Dam Nazi waved him off.   Last I heard,  he was still hooked up  at the 500 foot mark waiting for the fish to unwind itself.    Mark,  If that ever happens again,  text me and Ill draw her away by  getting out of my boat  on the dam to take a pee at the Bay of Pigs while you swoop in and out to land the fish.  I cant wait to hear the story.

Mark is an awesome fisherman.  I watched him fish today for the first time and got to see his boat close up.   His Crestliner Fish Hawk is beautifully customized and sports the biggest motor our boats will hold.   I was very impressed  how well it was setup.   All the details are well thought out from the electronics mounts to the  rod racks.  I especially like his rod racks which are on the rail of the boat made by Driftmaster.   He even has a customize cigar holder on the rail –  most excellent. 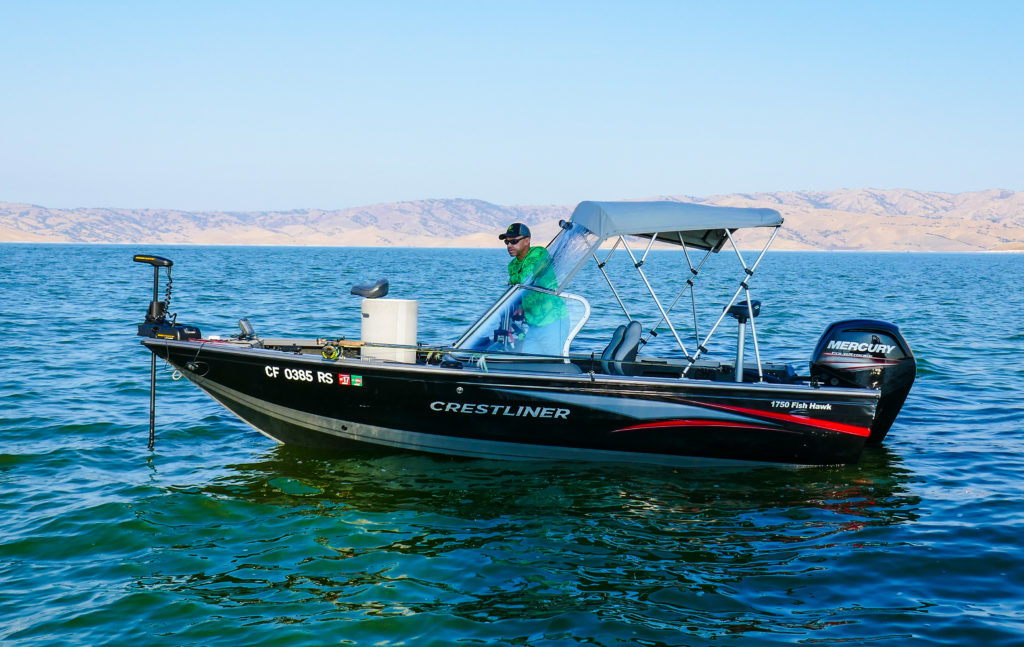 One thing Ive learned from watching others  land fish while being harassed by Dam Police is that it pays to put the screws to the fish and back out of the racks to the 500 foot mark if you see the car coming for you.  Drag that fish outa there with the trolling motor.    Funny how you fish at the racks for a couple hours and just when she drives up,  you hook the big one.      I hand stripped today’s big striper to the boat, took a picture and released it in less than 2 minutes  putting maximum pressure on the fish with 20 lb Seagar fluro.  I think I scared Steph in the boat next to me.   Steve Santucci once advised me that its better to keep stripping while you are gaining on the fish  and not to go to the reel  unless  you have too.   I live by that rule now.

I kept a couple for dinner and met some Fluke fishermen at the cleaning station.  They had 4 ten pound fish that they had caught jigging while flukes.   That is a deadly way to catch stripers this time of year.   As I was getting rebanded, the kiosk attendent reminded me that boats had to stay 500 feet from the dam and we got into a friendly discussion about what constitutes “trespassing” and who owns the water around the racks.   Its a dumb rule if its based on terrorism and needs to be challenged.  The rule doesn’t really do anything for the security of the dam and thinking so is a waste of money and a false sense of problem solved-so typical of our government now.   Less regulation saves everyone money  (except for the minimum wage job of patrolling)  and the  boat inspections will take care of the security issues in a much cheaper and efficient way.

It is hard to believe the lake looked like this a year ago…. 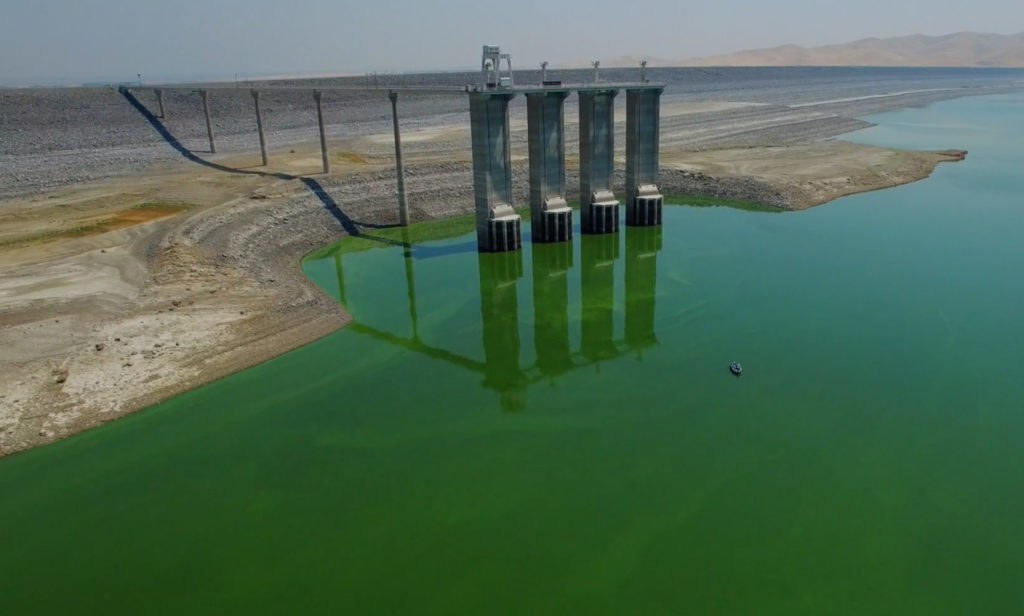 Good morning Gentlemen, if you are busy read this some other time…My wife tells me that I was way too bummed over “the one that got away”. As Vaughn can attest I’m often hesitant to fish ‘the racks’ in fear of getting some sort of fine or ticket that may impact my citizenship (any day now).  Yesterday the temptation was just too much. So after leaving BOP headed back and immediately started getting fish. At one point both Vaughn and Wayman had a double going and I got nailed with 3-5lb fish for a triple. Very cool.

The strikes were not as subtle as in the morning. I had just released a dink and made a cast in between the two north concrete columns when a fish hit my fly so hard it literally pulled the rod out of my hand. I knew it was a big fish, it did something I haven’t seen before. The fish went very deep and my reel was screaming (closest thing to Atlantic Salmon Ive seen).  The fish went straight down and as “luck” would have it went toward the cable in the middle of the concrete columns. Stef had no sooner said “watch out he doesn’t wrap around the cable”  when we could see the cable move….trouble.

To cap off the perfect storm we also just hear the Dam Police yelling, in the excitement I didn’t notice her coming. No big deal, just slowly cruise out and bring the fish along….(lesson #2 – recharge new Ulterra Motor after every day on water – it was dead!)

To wrap it up, I was way out from the trash racks, fish still on and way into my backing.  The security guard wasn’t going anywhere so the only choice was to break it off. Thanks Wayman for convincing me that 30lb leader would break before the fly line, it did and lets hope the big fish made it.

Totally a fish tale, who knows how big it really was but certainly felt bigger than anything I’ve ever had on the end of my line. I don’t know how big they get in that lake anymore but it has certainly changed my thought process. I think this was a beast

Trolling motor charged up, boat cleaned and gassed up and ready to go next Saturday. Im en route to the east coast right now and can’t wait to get back at this stuff…just too much fun.

Thanks for all the coaching yesterday guys, until next time.

6 thoughts on “Party at the Lake…”