The Amazon is the largest drainage system in the world responsible for almost 20% of the entire worlds fresh water discharge into the ocean. The Rio Marie is a tributary of the Rio Negro River which is the second largest Tributary of the Amazon River. Three years ago Untamed Angling built “the Untamed Amazon” to navigate and fish 500 miles of the Rio Marie and it’s 60 lakes and 180 tributaries. Only accessable by float plane, the mother ship with its navy of custom made 21 foot skiffs, fish virgin water by moving up  river daily covering around 500 miles of prime Peacock Bass habitat. The Untamed Amazon can generate 100% of its electrical power from its own solar cells and batteries. Imagine having 24 hour electricity, hot showers, daily laundry service and internet on one of the most remote rivers in the world. It is perhaps the most unique fly fishing vessel of its kind and the food and accommodations are amazing. This trip ranks as one of the best fishing expeditions Ive ever taken. 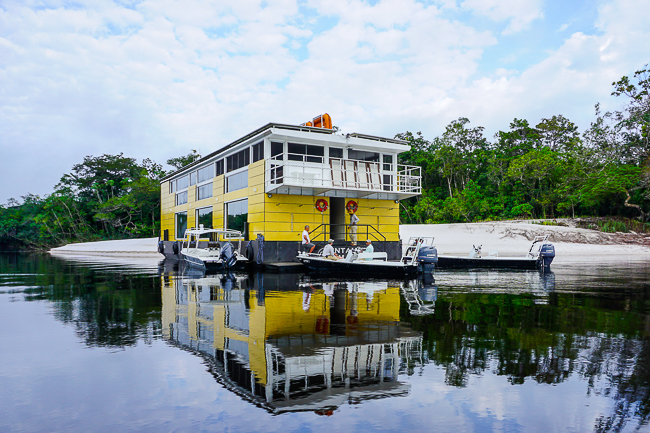 Steve and I were lucky enough to fish with some great anglers this week. Along with long time fishing friends, Victor, Judy and John Leonard, We got to fish with Michael Michalak (owner of the Redding Fly Shop) and two great new friends — Joe and Juan. Together we landed 531 Butterfly Peacocks and 47 Temensis (Giant Peacock bass GPB). Of the nearly 50 GBA we caught, 11 were 10-15 lbs, nine were from 15 to 20lbs, and three were over 20 lbs. The largest one caught this week was 25 lbs , just 3 lbs off the current terminal tackle world record.

It’s easy to get caught up in “Giant” fever when you are here because there is a lot of talk about the next world record. Even the guides seemed to set the “Big Fish Bar” at plus 20 lbs and dont get too excited about sub 20 lbrs. We only managed three all week and two were caught by John Leonard out of 8 anglers. Everyone got some fish this week over ten lbs which is realistically an amazing stat in itself. For me, it was about comparing the experience to a good day of striper fishing since it was my first experience fishing for Peacocks. A bad day of fishing for Peacock bass is better than a good day of Striper fishing on San Luis. Even with gloves, tape and stripping guards, I got line cuts through my protection. These are truely brutal fish (my favorite). The main classes of fish that are caught are the Butterfly Peacocks (Cichla orinocensis) which average 3-10 lbs and feature three distinct ocelli (Butterfly like markings) along its sides. They fight like San Luis Stripers on Steroids. The Cichla Temensis is the Giant of Peacock bass. They spawn in beds in the river holding there young in there mouths. When they get large, these lose their spotting and develop three black bars down their orange brown flanks. In this spawning state they are known as “Acu”. This same species can go into a non spawning state know as a Paca-Asu. The Paca don’t reproduce and focus on hunting and eating. The Paca are stronger and more vicious because of the lack of reproductive distractions. They are differentiated by purple blue flanks with white spots. On an average day, Steve and I put 20-60 fish to the boat and I can truthfully say that these fish hit harder and pull harder that stripers the same size. Over the last 6 weeks, anglers are getting on average 2-3 shots a day at large GPB or Paca’s. Not only are they an awesome fish to hook on Streamers and Poppers, they are beautiful fish with no two the same. My biggest fish of the week was caught on the first day on the next to last cast of the day at 15 lbs. The monster hit my 5/0 streamer 3 feet off the bank and made a run for timber like a Lingcod for rocks, It was everything I had on my 8 weight to turn it and my running line cut through my finger tape like butter giving me a nasty line cut on the first day. Not to underate them, but like really big stripers, big peacocks are good for two or three great runs and then they give up. No one I talked to fought the big ones into backing. John Leonard who has been to the Rio Marie 4 times caught most of the large fish. His 25 lbr was caught on his now perfected technique of free drifting a Popper five feet from the boat while contemplating cutting the fly off. Victor, one incredible fly fisherman, caught an unusual 20+ lb Paca which the guides say fight harder than a 25 lb GPB.  A 20 lb Paca is a rare fish indeed and I heard a few guides say its the biggest one they have ever seen. 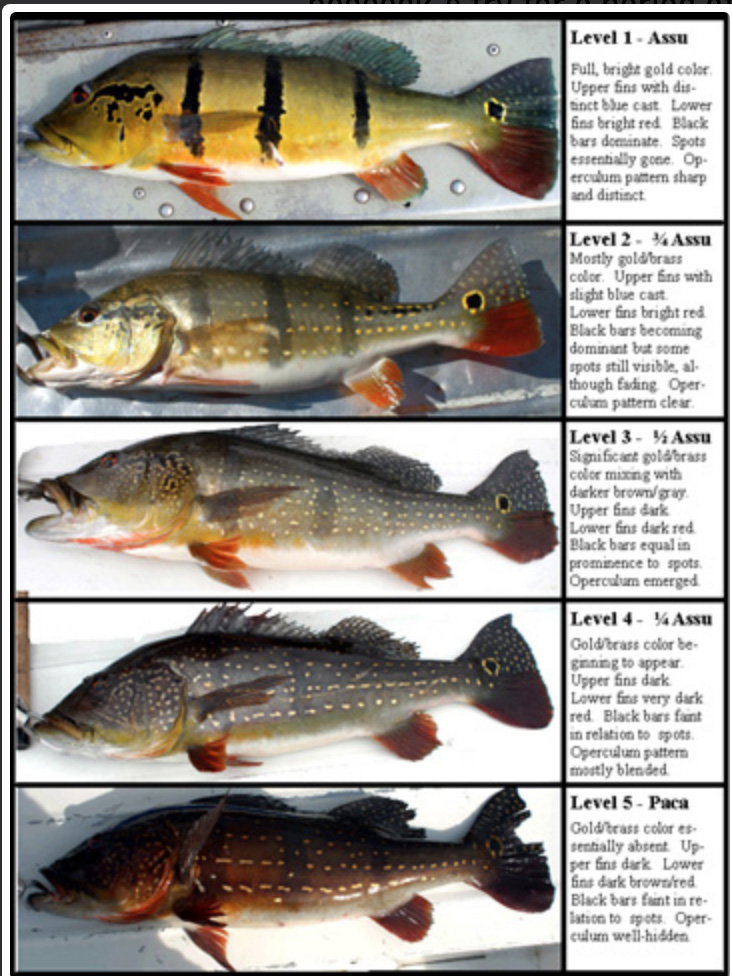 The travel to the Amazon Explorer is arduous. We left San Jose on a 5 hour redeye to Charlotte. From Charlotte we headed to Miami and on to Manaus. The total travel time with layovers was 24 hours. The next day we took a 4 hour float plane to the mothership and didn’t start fishing till the next day. You would think that I would be use to this kind of travel after two Bolivia Amazon trips this year but it’s getting harder and harder to sleep in airplanes for me. I need some special pillows for the next trip. You need to get a Brazilian Visa 6 months in advance and a yellow fever Vaccine.

The boat is awesome- even better than Bolivia’s luxury lodge. We were delighted with the full picture window, air conditioned, double occupancy rooms with hot showers, The main socializing room has a beautiful lounge and dinning area as well as a outdoor lounge area with jacuzzis and a rear viewing deck. The food is excellent and the laundry service is fast and good. The Laundry service was so fast and efficient that you could bring only one set of clothes to fish in and they would be cleaned every day on time for the next morning. Which is what Mike Mitchell had to do since his luggage did not make it to Manaus on time. Mike ended up fishing the week on donated fishing equipment and underwear. There is 24 hour electricity. One of our group was able to use his CPAP machine every night. On top of all this luxury and comfort is a highly skilled and friendly captain, chef and staff. The group of guides are Brazilian and Argentinian. They work well as a team to optimize each fisherman’s chances at big fish. Guides are rotated daily and I enjoyed every one of them. These Brazilian and Argentinian guides are all extremely experienced and just great guys to fish with all day. There is not a place in the world that at least one of these guides haven’t worked a season. I learned about baby tarpon in Brazil and Icelandic brown trout fishing in lakes. When Steve got tired, I insisted that the guides fish. They are all great casters and you can learn more from watching them fish than practicing.   Most admitted that fishing the Marie is in its infancy and things also change from year to year making it hard to develop a real system.

I suppose I thought the fishing would be automatic with virgin water and fish that have never seen flies, but its not that easy at times. The fish are sensitive to water temperatures and water flow.  We fished over large areas of dead water to find the HOT spots. The big fish can happen at any time and especially when you don’t expect it. John second 20 plus fish was caught just dangling the fly under the boat. The 3-10 lb Butterfly  Peacocks  keep it exciting and we had many double hookups. It was a good strategy to rest and wait for your partner to hook up before casting. At our best spot, we caught 50 peacocks in one area till we were got tired and left looking for bigger fish.  I calculated that each of us casts about 1000 times a day and its a challenge to cast flies accurately to the shoreline all day with out snagging excessively.

The Peacock bass operation owned by Untamed Anglers has produced world record Peacock bass on the fly year after year and produces more 20 pound plus Peacock Bass than any other river in Brazil. Anglers live on a Mothership that rivals the luxury river cruises of Europe (on a smaller scale) and if you are one of the lucky few that books a spot on the Amazon Explorer (which only take 4-8 anglers. a week for ten weeks a year) you have the opportunity to fish 500 miles of virgin water on the largest catch and release fly fishing only reserve in the world. The operation is only three years old and the number of people who have EVER fished the Rio Marie can fit in the upstair lounge—maybe less than 300 anglers. Its truly a brand new destination and you are fishing for fish that have never seen a fly.

7 thoughts on “The Rio Marie – River of Giants”