For me, half the fun of Flyfishing is in the videography of flyfishing. Flyfishing to begin with is a complex pursuit at it highest level. It can be a game of minutia and what started out with a pole, string and worm has compounded into my interest in Digital Photography and Videography, Drone Science, Flytying, and Tackle Craft, Physics, Fisheries Biology and Cooking to name a few. Warning to others, this sport of fly fishing can become consuming if not life changing especially for people like myself with a little OCD. The sport is so addicting because it seems at times there are so many aspects linked to successful goal of catching fish on flies – tying the right flies, using the right gear, anticipating the behavior or fish in changing variables and of course luck. That said, fishing videography has also become an obsession with me. Trying to perfect the one man film crew and be the subject has been a challenge for me since I started filming in 1983 with camcorders. I can say with certainty that watching my old videos and those of other addicts has made me advance in the sport and made me better prepared for new adventures in fly fishing. With 4K and HD TVs in every fishermans home, the sport of advanced flyfishing is reaching more people than ever.  I already see a new generation of Flyfisherman in Social Media that are young and expert at a much younger age than my generation because the science of flyfishing has become globalized through social media.

I like to think that my blog is unique in the way I use the latest greatest action cams and accessories including aerial and underwater drones to specifically film fly fishing. Ive been using GoPro cameras since they were introduced in 2002 and have every camera they have made in my arsenal including the recent GoPro Hero6, Hero5 Session and the new GoPro Fusion 360.  The most significant advance in sports cameras for fishing videos is the ability to loop record off a big battery all day long which makes up for my inability to catch fish at will.  Editing Video condenses the essence of 10 hours on the water into 3 minutes and while editing,  it makes me feel like more happened during the day than I remember.   I really enjoy reviewing the day through editing and loop videography helps me capture those unpredictable moments that often define the day.   The following recent releases by GoPro have improved my fishing videography in some significant ways. 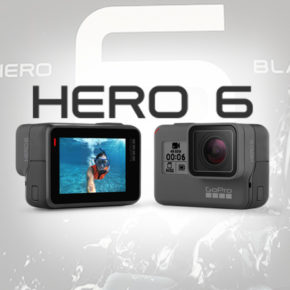 On my last trip to Brazil, I brought several GoPro Hero6’s mounted on FATBAT batteries and suction cups.  Mounted to the tops of the center consoles on swiveling heads, they loop recorded all day with no issues and the guides had no issues with rotating the cameras when We switched from port to starboard fishing positions. . The Hero6 is unique in its ability to film 4K in 60 frames a second and 1080p in 240 frames a second. Today’s best fishing videos  are shot in the style of NFL Films who pioneered the shooting of sports in slow motion. Clean Slow Motion, especially in flyfishing videos, preserves the essence of the sport. It gives us insight into events that happen in seconds. Those events that happen in fractions of a second are the reasons we are addicted and the reason we keep fishing even when we fail to catch. There is much to learn from studying the one second details.  Before the Hero6, this quality of slow motion was reserved for the most expensive big video cameras on the market but now, anyone can shoot Hi Quality SLOMO and publish it to the public with YouTube and Vimeo.   Now that I have the equipment for SLOMO, the challenge of aiming it at the right spot still exists.  Its hard to guess where a fighting fish will break water and on the down side there is no zoom lens on GoPros.  But, the GoPro has a nearly infinite depth of field and the ability to shoot 60P framerates in 4k means we can digitally crop to 4x and still maintain a 1080p crisp image.    That means shooting with a GoPro six is like hunting with a shotgun-close enough on the aim is great.    Problem kinda solved right? 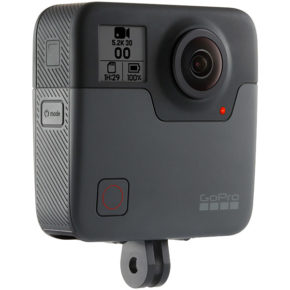 What is better than spray and pray you might ask.  Not aiming the camera at all and that is what the GoPro Fusion brings to the table table in Flyfishing Videography.  The Fusion is a game changing 360 degree camera made for the consumer market.  My first experiences with the Nikon 360 camera left me wanting more with poor resolution, difficult interfaces and editing nightmares.  The FUSION records in 5k vs 4k making the footage 20 percent  better right out of the camera.   There is also an amazing ability to drop down to 3k resolution with 60fps in 360 VR (good quality slow motion VR) and  nobody does that yet.  GoPro does this by recording video onto two different SD cards-one for the front and one for the back.  The FUSION is actually two 180 degree fisheye cameras in one.   Built in the tradition of GoPros user interface,  it is fairly easy to control although the Iphone Interface is critical for  360 viewing and managing media on the camera.  The app also makes its much easier to switch features on and off.   With 360 degree viewing,  Its not as important where you point the camera since it is shooting everything all the time.  I wish there were a loop feature but I hope that can be addressed in future software.   The ability to preview footage on the iphone app is very cool since you can view the preview as a VR live stream.  I can see some real time applications for this that would be crazy fun.   Imagine given the right bandwith, being able to fish with someone anywhere in the world through live VR.   Even recording a simple event as your first tarpon would be priceless because you could relive the entire experience over and over again looking at different things like the guides facial expression,  the line on the deck,  the fish jumping while you are looking down at your reel etc.   I recently recorded my friends wedding ceremony with a VR camera and every time I watch it, I see something different.   There are many things that go on around you  in the course of landing a fish that go unnoticed.   The groundbreaking feature of the GoPro Fusion in 360 degree video is something they call Overcapture which in a nutshell allows editors to recompose parts of a 3d video into a 2d HD framework.  The software that was released with this first gen FUSION is called FUSION STUDIO and is essential for downloading and stitching media from the camera.   The real editing  power however is found in the Adobe Premier Fusion Plug-in that allows the editor an almost infinite ways to frame and present parts of the 360 media in 2D Video Editing.    So far no plugin for Final Cut.  I use to be a Premier expert before 4k and it looks like Ill be firing it up again specifically for this exciting powerful plugin.   Fusion Studio has some great features in it that I havent seen before.   There are a couple 3D PLUGINS available for FCP like 360VR Tools by Dashwood3D but they are expensive.  Like 360 VR tools,  Fusion Studio lets you adjust horizon, Stabilize, Correct Color and Preview before render and export to different formats for publishing or 2d editing.    Plus it adds a bunch of creative tools  like Fisheye View and Little Planet.  The creative tools are very advanced and let you change the area of focus prior to rendering.  Finally,  it comes with VR Player 3.0 which is a great VR player especially when viewed with a VR setup like my HTC Vive.   Maybe I will be the first person to write a VR Game with a FlyRod but all you need now to complete the experience is a tug and a pull in the right places. 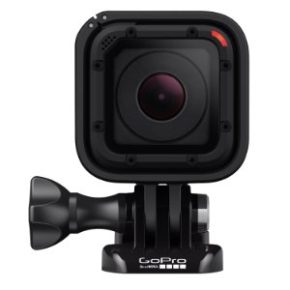 I love this little camera because you can put it anywhere and now that it can record 4k,  its the most travel friendly video tool in the box.  There are polarizing filters for the Sessions which snap on and off easily for use of the camera out of water and in water.  I always carry one on a selfie stick to take those quick shots that make a video complete–a must for the one man film crew.    You can buy very sexy little aluminum cases for the camera that have a sliding back door on the case which makes it easy to move the cube camera from place to place easily.  The sessions is the go to camera if I need a shot of the Sonar or I need a quick underwater shots of flies and fish.  I use the Session on a suction cup mount to take VLOG videos.    Because the camera is so small, it can fit where no camera can go and it makes for wonderful candid videos since its easy to conceal.   Because of its size,  its easy to wear even with a stabilizer,  its easy to put on the end of a long pole in the air or in the water.    The best way to use a sessions is to use the Iphone GoPro App to control and preview the camera.   In the past,  I use to do my underwater videos on the end of a long pole,  point it and pray something was in frame.   The preview mode in the Iphone App works fine in air but once you put any GoPro camera under water,  it looses its wifi connectivity above water.  Recently, I discovered a way to restore the wifi connection between my GoPro from under  three feet of water by building an antenna into the case of the camera which brought the 2.4 ghz signal to my phone via a wire through the water.  The trick is to use the right wire which is RG 174.  I also found a Jib which allows me to change the angle of the camera while its under water–the MICROJIB. The MicroJib allows you to tilt the GoPro at the end of the jib from the handle and really beats taking the camera out of the water and adjusting the angle every time you put it in the water.    The combination of the two products and a modified  Scotty Post Tranducer mount which allows me to easily attach it to the rail of my boat in different positions.   The Finished Product works great especially when placed on the sunny side of the boat in clear water.   I can  shoot flies moving in the water and keep it in frame with the trolling motor on low.  Over the years, buying Iphones for the kids,  I have a box of old Iphone 5s and 6’s that have been repurposed as drone and camera remotes. Usually the batteries die on these phones making them nearly unsellable but I found a cheap way to replace the batteries for around 30 bucks.