Its been a year since I fished with Dan at San Luis.  I was hoping to show him a good day but I had my doubts after the slow day I had last week.  I was putting my faith in the Oneill Forebay for our trip since last year at this time,  I found lots of fish on the flats as the weeds died off fishing with Dorothy mid December last year.   We got to the Forebay to find we were the ONLY boat to launch.  That’s not a great sign but I remained optimistic with the great weather.     The water temps were in the mid 40s and the dock was iced over.  Dan almost lost it on the dock  but we managed our old bodies into the boat and headed off to look for fish.   I had not fished the Forebay for a year and after pounding the lake all year,  the forebay seemed oddly small.  There were only half a dozen places to really look for fish and we hit them all with only 4 dinks to show. We saw a couple float tubers flyfishing but no one was on fish that we watched. Another strange thing was the absence of weeds-even dying weeds.  There were rumors last year that the DWR was chemically killing off the weeds which would explain how sterile the forebay appeared. Also, the forebay water was more turbid than the lake.  The executive decision “not catch fish” in the Big Lake vs “not catch fish” in the Forebay was made and we rebanded and headed to Basalt Launch around 10 am.

We launched at Basalt and headed straight to the Bay of Pigs.  We started of fishing the shoreline and concentrated on 20 feet of water looking for schools running up and down the dam.    Dan tried his Arizona Striper Flies and I fished my unweighted craft fur flies in yellow\tan\white. Craft fur is quickly becoming my favorite material of all time for striper flies. Fishing from 11am to 3pm we caught 4 fish over 18 inches with one fat 8 lbr fishing from Dave’s Rock to the Guardrail.  Im feeling really confident on this stretch lately.  Fishing a fly slowly along the bottom seems effective and the hits are light and subtle-easily missed.  It might take a thousand casts but I think this technique could work all winter on those lazy large bottom fish.  Suspending flies seem to work better. This December, the wall has saved my day several times and I think its just a matter of not giving up if you need to save the day.

We had a shot at fishing the trash racks when it appeared that the DP had left for the the day. We took a run at the racks and on the first cast right on the towers, we hooked up on the drop to nice fish. As we were landing the fish I saw the car coming from basalt and hit the autopilot to take us out and away. Unfortunately we only had one cast at the towers but they were there and they hit the fly on the long drop without stripping! I sure love that when it happens. Its been awhile since Ive seen them around the racks and they will probably be gone tomorrow. The dam police was active today but they never kicked us off the dam even though they saw us fishing within 60 feet-just the trash racks were patrolled.

Last week my three year old trolling motor batteries started to die at noon which is unacceptable. I bought two class 31 AGM Optima batteries from Bass Pro Shop and install them last night. Today the 360 Sonar was acting weird working intermittently and I lost one external power supply on one of the GoPros. I think that by unhooking the batteries, I must reconfigure the fish finders bu updating the network settings so they know what sensors and transducers to use. There are 4 on my boat. Despite limping along with only one camera, we got some great drone shots and managed to capture a bit of every fish we landed. The DJI Spark Drone continues to blow my mind as a versatile tool. The latest firmware improves it use with the DJI Goggles which is my next step on the boat. Its much easier to see busting fish with a drone than with binoculars. ALso, I didnt get a chance to use the GoPro Fusion upside down under the boat which could be a coo, cool shot. 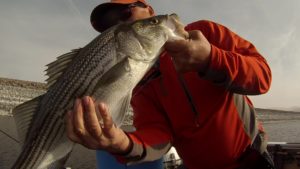 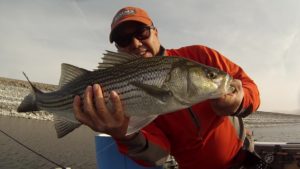 One thought on “Dan Dee and San Luis Reservoir again….”