Last Monday, Dan Blanton got a 23 pounder out of the west side.   That’s an amazing fish for December in my opinion.   December for me has been one of the slowest months of the year for me in the past.   But it must be just me.   Vaughn, Dan and Mark B  all seem to do just fine .   My first day on the lake of 2018 was a bust and I was nervous about getting the jinx off me today.  I had fished the spots that Dan and Vaughn had fished the day before on Sunday and had really bad luck only 24 hours earlier.   They got 20 fish and the 23 pounder just the next day.   Dan commented,  “here today, gone tomorrow and vica versa…” to make me feel better. It makes you doubt your knowledge base.

I had hoped to go out on Saturday, but the weather was not good and I was coming down with a cold.   I took a bunch of antioxidants,  drank tons of water and rested on Saturday hoping to feel better to fish. I felt ok at 6:00AM and headed for the lake.  I was planning on retracing Vaughn and Dans epic day.   Vaughn actually did well again on Wednesday fishing the west side.  Those guys really like the west side and I really like the east side.   I was listening to the news and getting pissed off about the Democratic Filibuster and missed the Dinosaur Point turn off.   It was fate.

I launched at Basalt and it was not crowded.   Maybe the trollers are giving it a rest. Even though I heard someone caught a 33 pounder in the BOP on topwater lures.  I hadn’t checked the Fresno Bee Fishing report but the trollers really pay attention to the fishing reports.  Just like a week ago,   I metered fish off the boat ramp but this time I actually caught several dinks.   There sure is a ton of bait in that Bay around the Basalt Launch.    I fished there for an hour and headed for the BOP and Dam.   The BOP had some float tubers so I gave them some room and start fishing the guardrail.   Nothing there.   I headed to the Trash Racks and picked up half a dozen fish around the racks on a long count and slow retrieve.  Once in awhile I would meter a school of fish about 40 feet down and if I could get my fly down to them before they left,  I would get a couple nice fish.   The sonar came in handy today trying to lead deep schools of fish with a long cast and count.   After a half dozen fish there,  I motored to Romero.   I like to sneak up on that spot along the dam .  I found a large school of 20 inch fish   at monument and managed to stay on them for another 6 fish.   After awhile,  a gear guy came in and I couldn’t find the school.   After an hour looking for them,  I headed to the coves east of Cottonwood to look for Dan’s fish.   I picked up a couple right around the sunken trees but they took alot of work for just a couple fish.   I got 16 for the day with 7 fish from 20-24 inches

I mainly used T-11 heads around the trees and dam.  At the trash racks I was using 28 feet of t14.   Im still into my craft fur jig hook,  fish mask  flies in a size one with a pulse disc.   I did tie a bunch of rear weighted fish mask flies but I think they dont move as good as an unweighted fishmask clouser with a pulse disk as a better movement. But then Dans 23 pounder didn’t care if there was a pulse disc on it.   Casting over the island today at Monument where it was shallow (10feet),  I was stripping fast and suddenly lost the vibration of the pulse disk.  A six pound striper ate the fly  coming at me.  I set the hook when I lost the feel of the pulse disk and the fish was on.

My Trident underwater drone is on its way.  I cant wait to try it in the lake while the water is super clear.   I might go look for some dropped gear that I marked on my Nav unit.

I was a really fun December day today.   I kept two six pounders and prepared a gourmet feast for Gina and my mom .  Those San Luis Stripers are the cleanest stripers in the world I bet.   I Souse Vide the Striper fillets at 126 degrees for half an hour and served them with wild rice and peas with a Beurre Blanc Sauce. 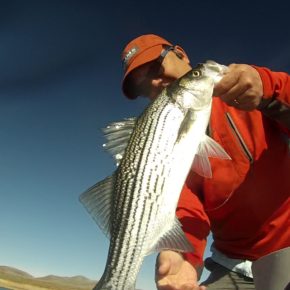 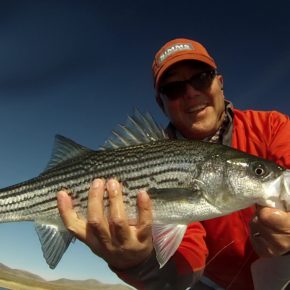 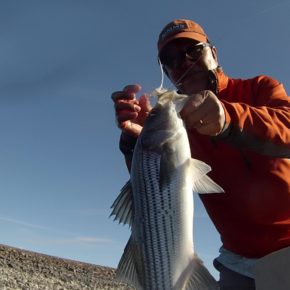 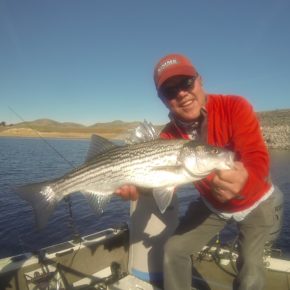 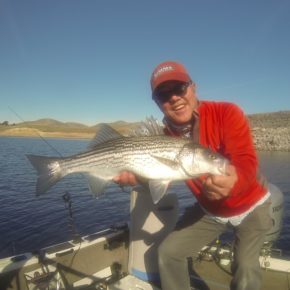 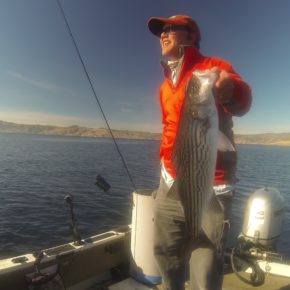 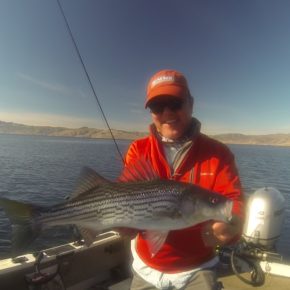 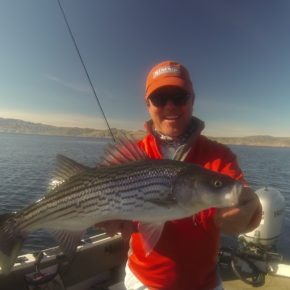 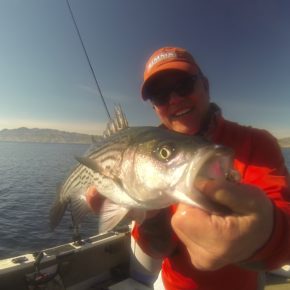 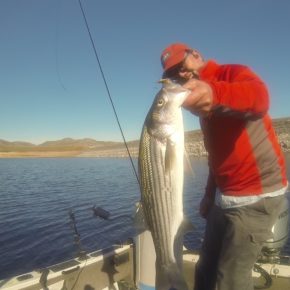