You know how those little home projects turn into monsters? Here is yet another story of how a small project turned into a major one. After the California Drought of 2012 through 2017, I decided to let my crappy lawn go brown which it has remained till this year. Even though our grapes were thriving as were a couple trees on the property, the overall appearance of our home was a cross between Vinyard Chique and foreclosed property. Last year I set out to get quotes on artificial lawn and got an education that lasted over a year about the pros and cons of artificial lawn–a low maintenance option to water sucking living lawn. Did you know your houw window positions can light your lawn of fire? Or, that putting lawn down inside the drip zone of a tree will kill it? The quotes were much more expensive than the home depot sign that advertised 10-15 dollars a square foot and I realized that the key to a great do it yourself install would be the grading of the property and perhaps a retaining wall to split the grade making the lawn more flat. That’s when it all snowballed. At least I had some time to spend on it these last months with the wind at San Luis Reservoir preventing me from fishing on the weekends.

In the process of getting bids for a retaining wall, Gina and I decided to replace our entire driveway with pavers like what we had on the side yard. I wanted to do an Inlay of a Trout in the center but that was shut down pretty fast. We decided to go with a father son company to do the pavers and a retaining wall. They were roughly 10 percent below the other bids and I was impressed with the young owner of the company. The pavers took about a month longer to complete than scheduled but I was ok with that as long as they didn’t break any irrigation pipes and they matched our existing pavers. 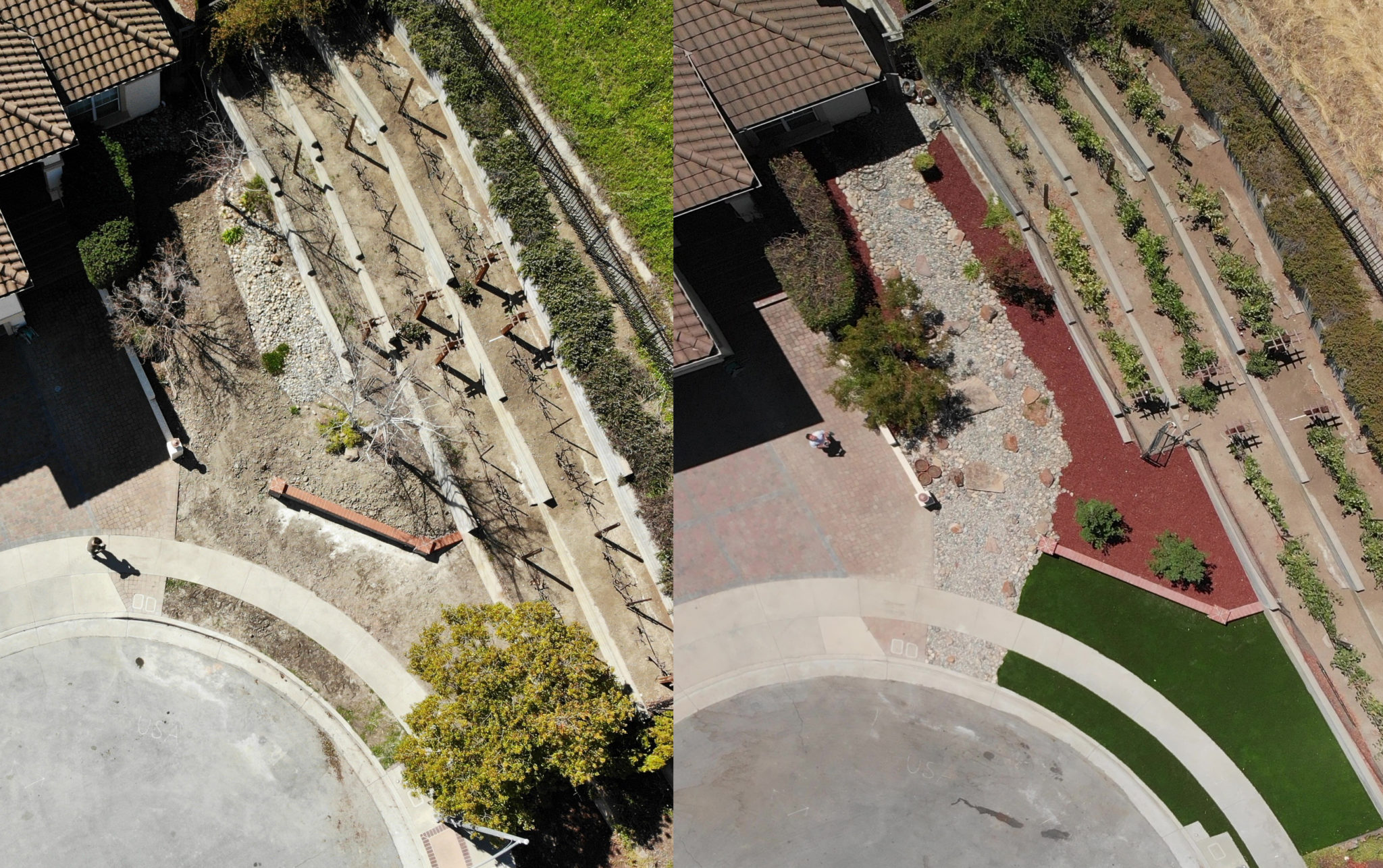 The paver project went well although took longer, and the retaining wall went up with some rough grading of the lawn area. The plan was to build a dry river bed to extend from our side gate to the street. Which was the natural flow of water when our backyard flooded after a torrential rain from hillside water that breached the burm on our hill fence during the flood of 2016. I was the only time I saw an actual river running through my yard in over 30 years. A river ran through it.

I designed the retaining wall to have lamps placed on the piers and asked for an electrical conduit under the river bed. After the retaining wall went up, I agreed to work on the landscaping with the same contractor since he had already started the grading when the retaining wall went up. With arial drone photography of the yard , we agreed to building a rock river bed and installing artificial turf and converting the irrigation to drip heads for future planting and preservation of existing three trees. The project got delayed for weeks with very little work and little communication, the grading of the lawn area ended up killing the 35 year old Camphor tree in the front yard and we ended up hiring tree removal services to get it off our property. When I had an arborist try to save it, he laughed and said is was actually a fire hazard and I told me I might get a ticket from the city. I told my contractor to remove the tree and redesigned the project to replace the 30 year old Camphor and the two old birch trees on the property documenting the Mature Dead Camphor Tree for an insurance claim against accidental death induced by tractor.

A series of mistakes made the project even longer, the grading was not perfect and Gina’s favorite tree died as a result, Weed cloth was not laid down under the river bed as contracted, the irrigation system was as mess after the grading with broken pipes and wires. I took that project over after waiting weeks for repair while my plants were thirsty. The wrong lawn was almost installed, had I not caught the mistake, it would have meant removing it and reinstalling a different one. What a mess.

The nightmare is pretty much over. After I got the contractors to put down weed cloth properly, I rebuilt the river like a the trout streams in my memory and successfully converted the sprinkler system to a drip zoned system with a cool internet controlled sprinkler timer that senses weather changes–the Ranchio Flow Meter. Very cool.

I still want to plant some drought tolerant plants around the river bed and some perennial flowers in the pots but thats the fun part. It’s on to the next projects which is to to replace about 200 yards of old fence and three gates, Replace the garage doors (read here about garages)and build a waterfall pond in the backyard for the sound of the river in the back yard. At least the grapes look good this year! Its going to be a good wine year. 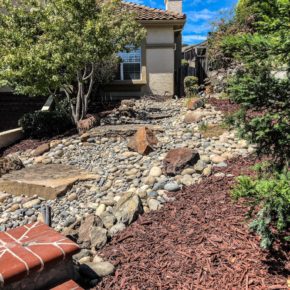 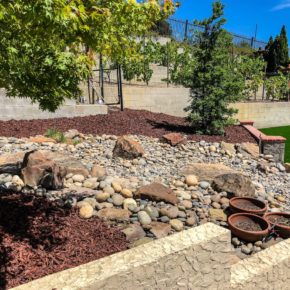 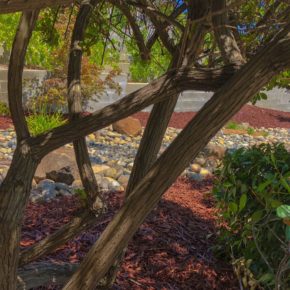 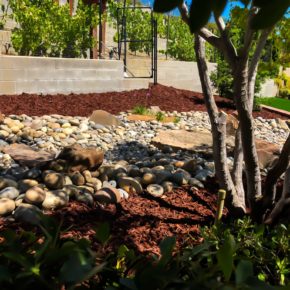 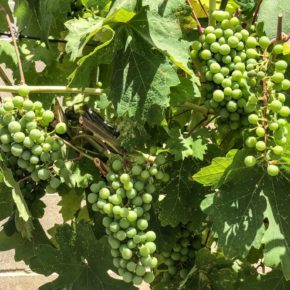 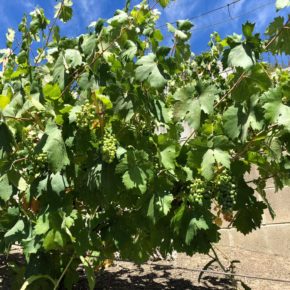 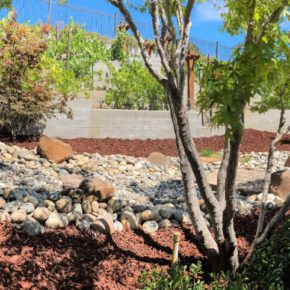 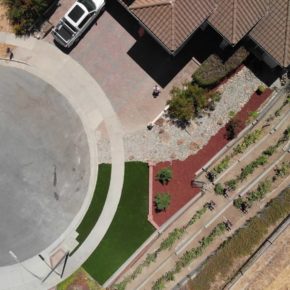 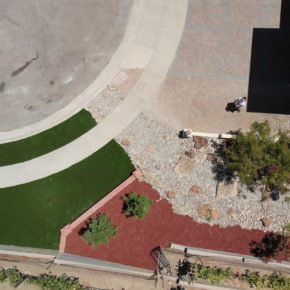 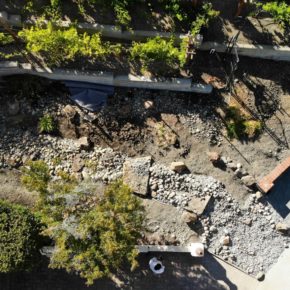 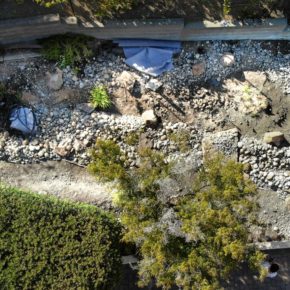 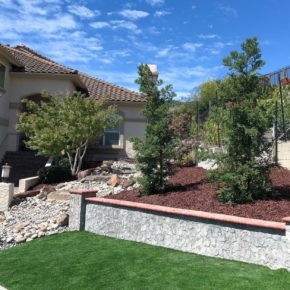 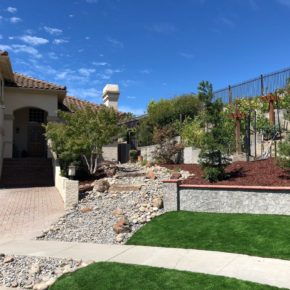 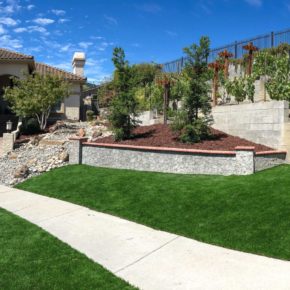 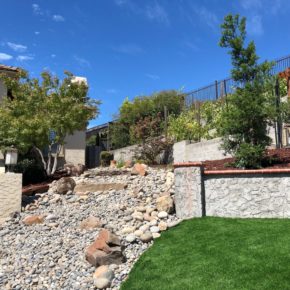 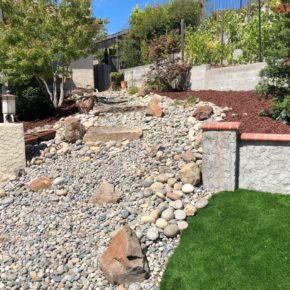 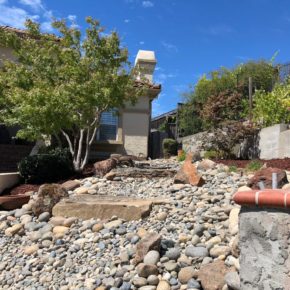 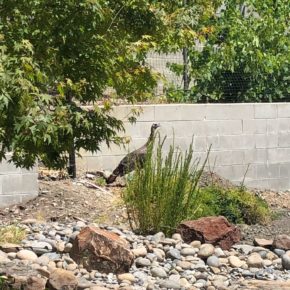 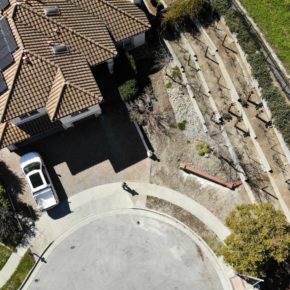 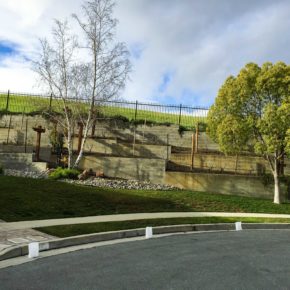 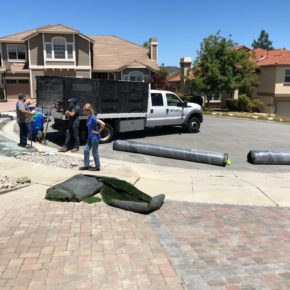 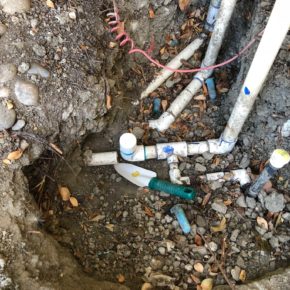 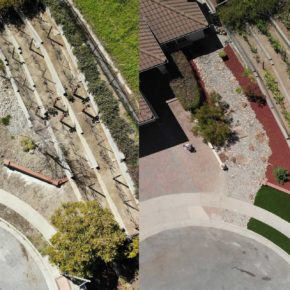 One thought on “Adventures in Landscaping 2018”