April 27 – March 10    In geography, the antipode of any spot on Earth is the point on Earth’s surface diametrically opposite to it. Australia is nearly the antipode of the United States and is the furthest Gina and I have ever traveled. Three years ago, we discovered the Dave Koz Jazz Cruise which has changed forever the way we like to travel around the world. Fishing has been a great way to see the world but right below Flyfishing is my love of jazz, photography and travelling the world with Gina. This trip was our third with the Koz Cruise and as with the past cruises, I can confidently say that we have found our people.  We saw old friends from the past three years and made great new ones.  The Dave Koz Cruises are so popular with return cruisers that it is nearly impossible to book as a newcomer. This year we saw performances by Jazz and Soul icons Tower of Power, Jeff Lorbar, Rick Braun, Richard Elliot, Gerald Albright as well as 30 other artists that were just as fantastic. One of the best things about this cruise is how the artist collaborate in their performances.  Young up and coming artist who get the  “Koz Nod” are launching there careers on this boat – Aubrey Logan, Javier Colon and Vincent Ingala to name a few.    Tower of Power doubled the size of their horn section with Candy Dulfer, Richard Elliot,  Dave Koz,  Aubrey Logan and Rick Braun on there  “What is Hip” finale.   It was the fattest horn section I have ever heard!   There is a great bond between the musicians (and their families) and the people on the boat.  We had a few artists remember us from past cruises.   During the week,  there were many opportunities to get to know the artists personally as we all experienced Australia together, eat meals together, and toured Australia together on shore excursions. Gina and I flew back to California across the isle from Peter White and Rick Braun .  Getting to know the artists personally has added another dimension to listening to their music–I enjoy it so much more.  My favorites this year were Aubrey Logan who in three years has risen to the top of the jazz billboard as a Gen X Jazz singer,  seeing home town Tower of Power still strong after 50 years and seeing Jeff Lorbar preform for the first time since I  attend his concerts in college.  Jeff Lorbar Fusion actually gave Dave Koz his start in the 80’s.   Jeff Lorbar Fusion = real jazz.

Tower of Power – What is Hip

Tower of Power – So Very Hard to Go 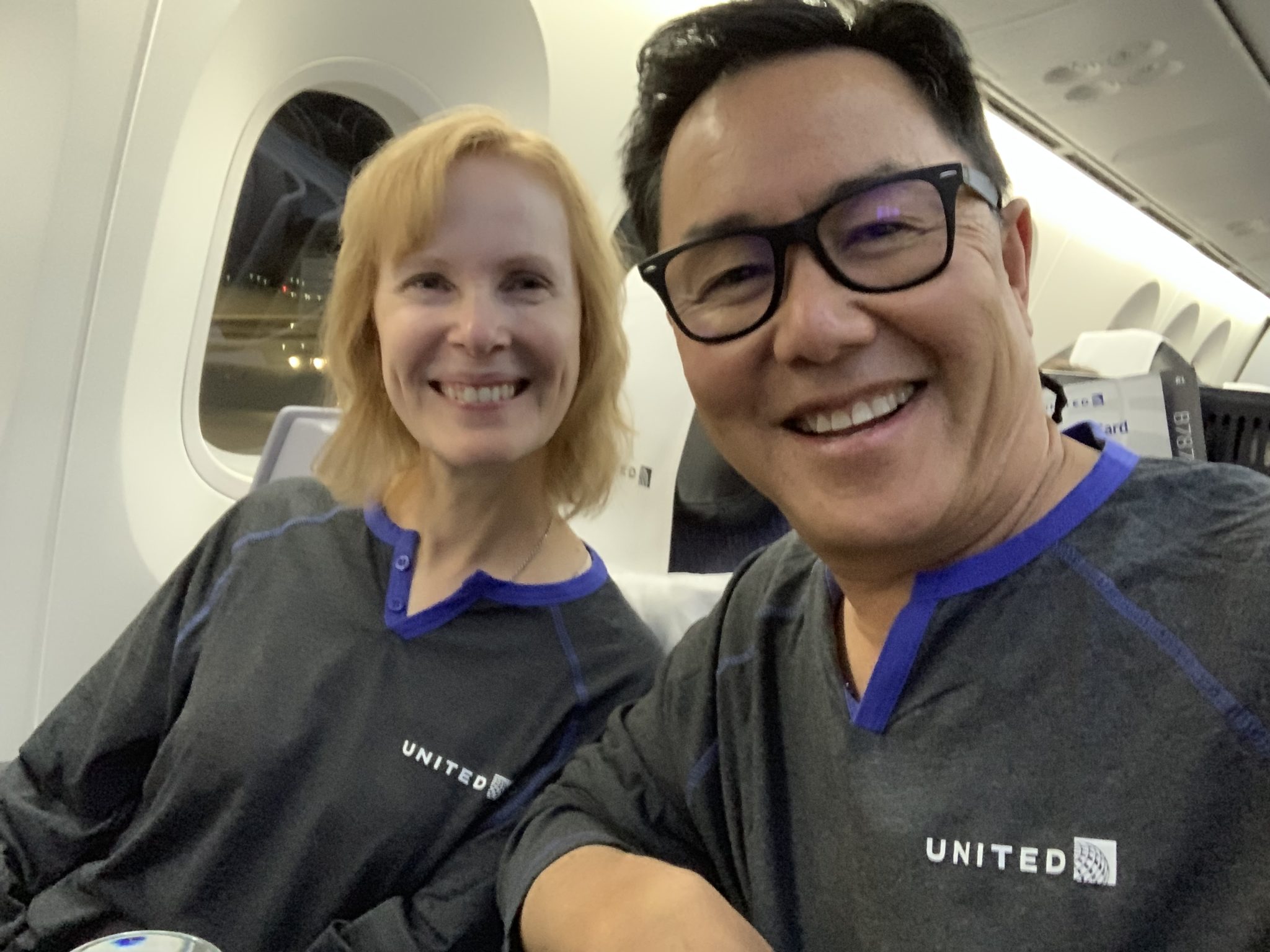 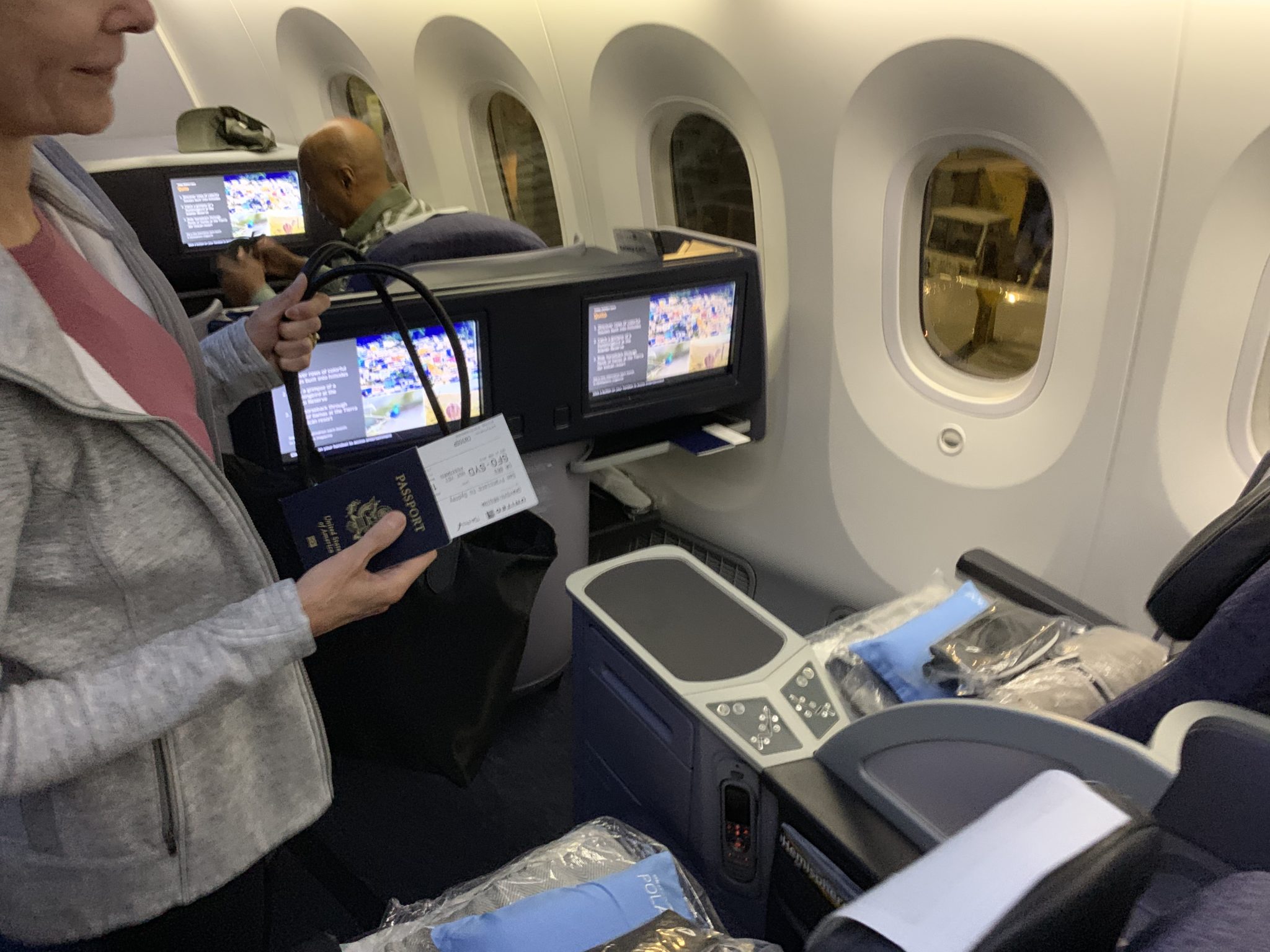 When we learned that Dave Koz was going to Australia a year ago, Gina and I decided to go only if we flew first class with a totally horizontal bed for the 15 hour non stop flight from San Francisco to Sydney.    Our old bodies just can’t do the pretzle thing over night.   United’s  Polaris Business class was one of the highlights of the trip. The Polaris Lounge at San Francisco is worth going a bit early to enjoy as well as the First Class lounges in Sydney. The two Round Trip tickets cost more than the cruise but there is no way I would travel with Gina that distance without it and thankfully we had enough United points to book it cheaper.  We are hooked on it now and I think its worth it.  We booked an Aft Cabin balcony on the Holland America Noordam which was also a nice upgrade with a bigger room and balcony facing out the back of the boat.    All I needed was a railing mount for a trolling rig and I could have  trolled a  fish out of the back of the cabin but I was under strict rules to leave all fishing gear at home. Still, fishing never left my mind on the trip- when I listen to music, I think of fishing and when I fish, Im listening to jazz. For me music and fishing are linked. 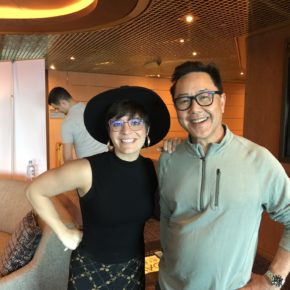 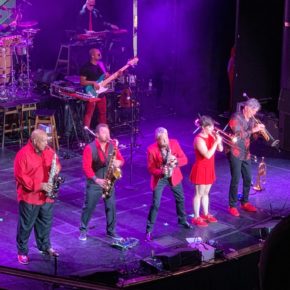 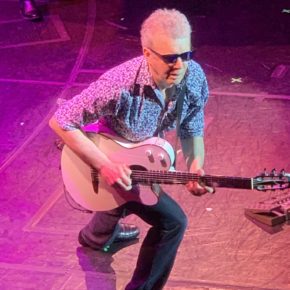 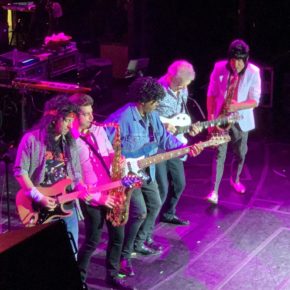 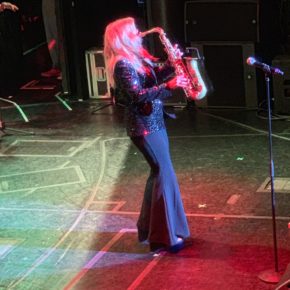 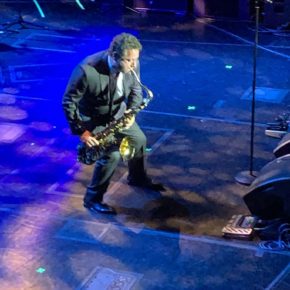 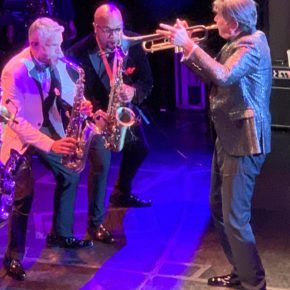 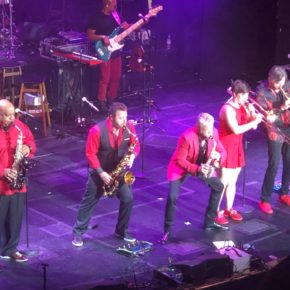 Gina spent several days in Sydney, Melbourn, Newcastle, Eden and Tasmania. I love Australia. The best thing about Australia is how friendly everyone is. Australia has the best looking, healthiest people on earth it seems. There were lots of Asian and the population was very diverse. It was the end of summer there and the surfing season was still in full swing. The cities and countryside were super clean. Even the animals we saw were cute and healthy looking. The southern hemisphere is like a parallel universe–at times I felt like I was in a better version of California. Plus, the fishing is off the hook everywhere – the way it might have been in California 100 years ago.

One of our favorite days was hanging out in a Wildlife preserve and playing with the native animals. It is crazy how Kangaroos roam wild on the golf courses in Australia much like the Elk do in Estes Park Colorado. I talked to a local golfer that told me the Kangaroo attacks on golfers is becoming common because the Kangaroo like the open fairways more than they like the bush. And it is not like they might get annoyed by your curiosity.  They actually stalk you and attack you from behind while your hitting the ball. However, most of the animals we saw were like living stuffed animals. I wanted to smuggle a Tasmanian Devil back to the states and domesticate it. The Koala Bears are just too cute to even use as dubbing. On the other hand you can buy Kangaroo Jerky at 7/11 so somebody is eating them.   The most dangerous animals in Australia are in the reef like the blue ringed octopus and some of the jellyfish which I actually saw in the wild along the shoreline. 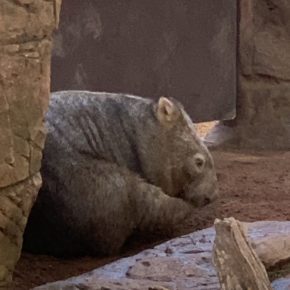 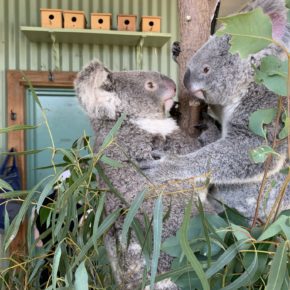 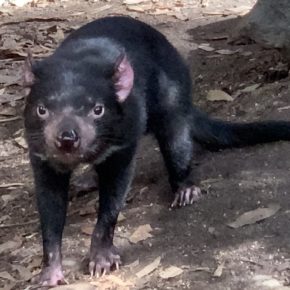 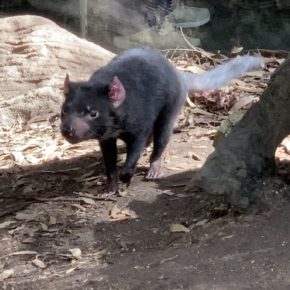 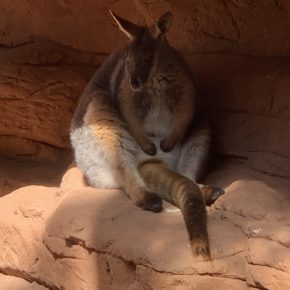 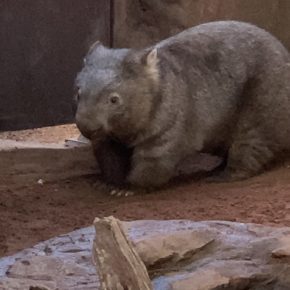 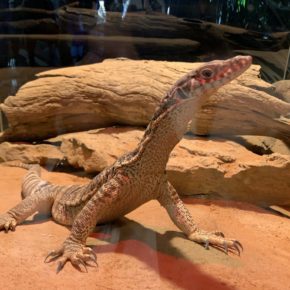 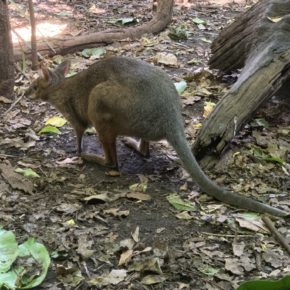 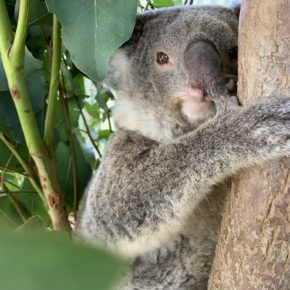 Cultured in some of the cleanest, most unpolluted waters in the world, Australian oysters are world renown.   The two main types of oysters you can eat in Australia are the Rock Oyster and the Pacific Oyster.   The pacific oyster is a species of Pacific Ocean oyster that is farmed  and is a bigger  than the Rocks.  The Rock oyster is quite particular about what it eats and filters much smaller particles than Pacifics, resulting in slower growth but flavors that are more directly related to the food in the water.  I liked the unique buttery, slightly salty  flavor of the Rock Oysters the best. We spent a day touring a oyster farming operation while I chowed down over three dozen Sidney Rock oysters (brought my own tobacco sauce).  Fresh Australian Oysters are some of the best I’ve ever eaten. 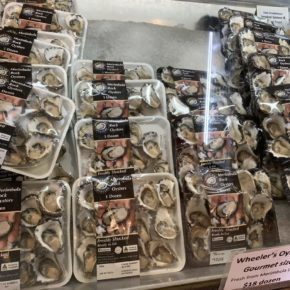 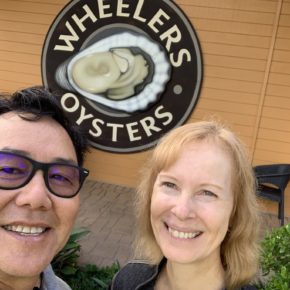 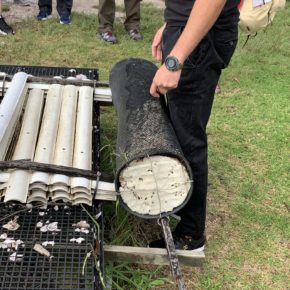 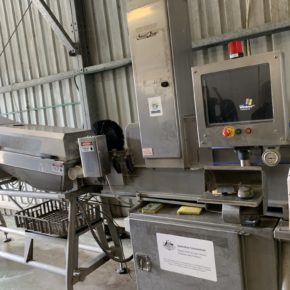 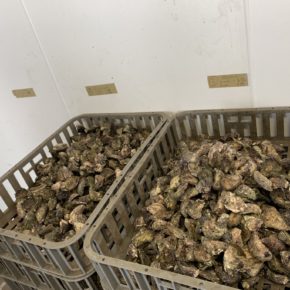 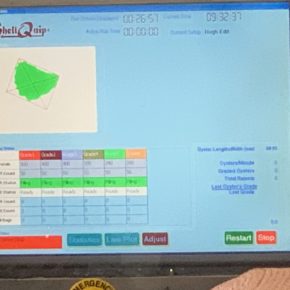 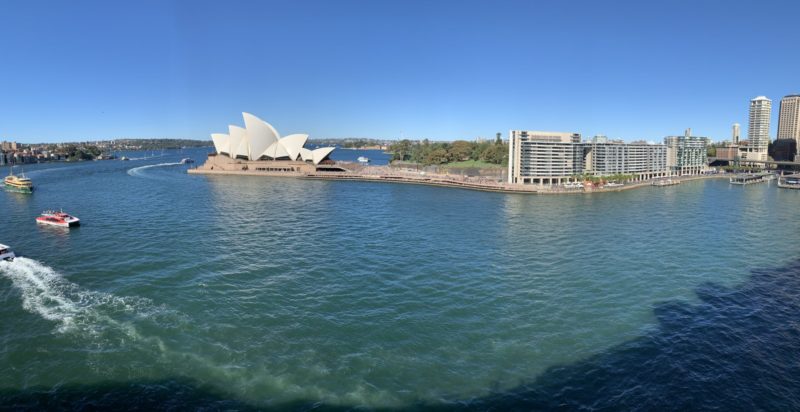 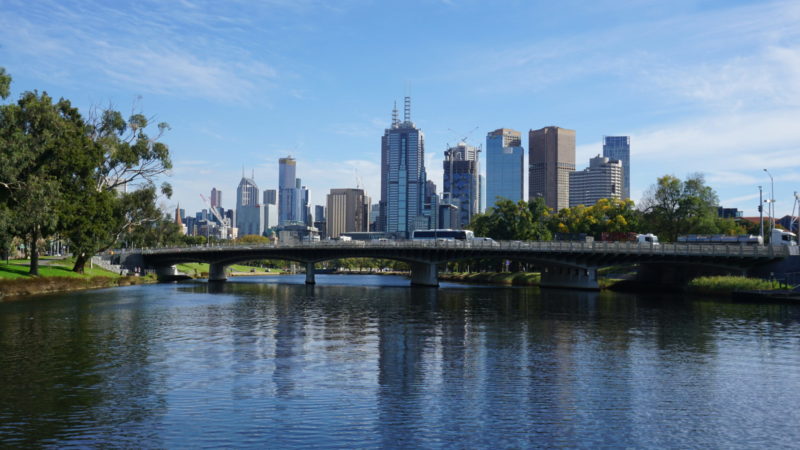 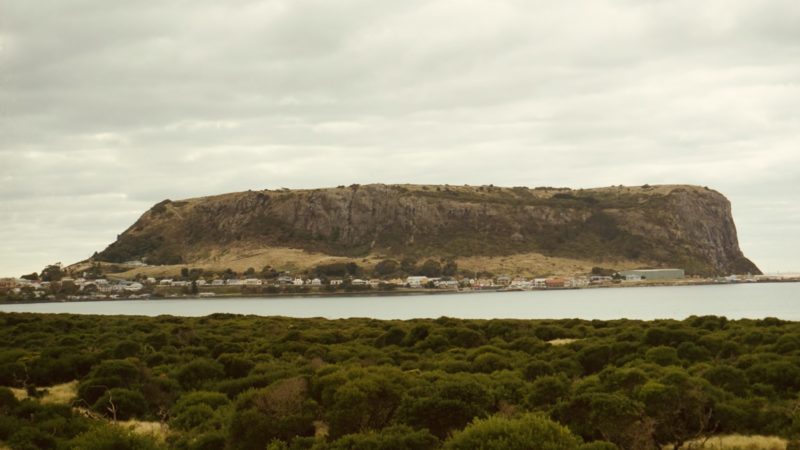 View from our Balcony

Of course I detoured over to some Australian Fly Shops any chance that I got.  Most of the fly shops had mostly American made stuff in them but I found some cool locally tied salt water patterns to play with.   There is so many opportunities to catch saltwater and freshwater fish everywhere and flyfishing  isn’t that popular yet.    There is a big British influence on the fly fishing in Australia and I found some cool stuff fly fishing stuff in the antique stores and pubs everywhere we looked.    Next time in Sydney,  I want to try a fly fishing day in the Sydney Harbor.  Look at the size of those yellowtail kingfish.  They are bigger than San Luis Schoolie Stripers and you are catching them in the shadow of the Sydney Opera House.   I could see myself living there for a couple months with a boat in the water in the city.  Two hours north are the Central West and the Blue Mountains area with some great trout fishing.