Friday April 26, 2019 Steve Van Den Brand Horninge and I have been fishing Oneill Forebay and  San Luis Reservoir together for years,  just not in the same boat till today.   Steve’s boat is in the shop,  and he mentioned  that he had a new rod that needed christening.  Our mutual friend,  Vaughn,   has been on the winning streak of a lifetime having caught 6 big stripers in a week.  It is a very rare time we are fishing in.   Not only have flyfishermen been getting large fish out of San Luis Reservoir these last couple weeks,  Roger George reported that he had a day when two large stripers were caught trolling  on the same day on his boat around the middle of April.   Could it be the Full Lake?   Today Steve and I made a serious big fish effort  on the lake trying to get ours.

We got on the lake today around 8:30 this morning  even though we knew the big fish had been caught mainly in the afternoon.   We concentrated our efforts on the Bay of Pigs  but couldn’t locate any schools of fish anywhere.   Our luck changed when we headed over to the Trash Racks.    The lake was blowing about 15 when we launched but between 10am and 12am, the wind died down and as soon as it did,  the fish  seemed to move up in the water column and started hitting our flies more aggressively.  We caught fish at will on a 20 count with a good cast close to the structure.  We caught lots of fish for an hour but kept checking the time to be a the big fish promised land in BOP for the afternoon.  At noon we decided to hunt for big fish around Romero.   I put on a big Flashtail Clouser and we caught some smaller stripers all around Romero.    The shad in that corner  are beginning to make that shoreline run and I managed to get a shad fly on then but they were not eating at all today.  That game will turn on soon.  The Stripers at Romero were located off the bank  in 30 -40 feet  and we noticed they seem to swim with the big shad schools in a big circle in the Romero Bay. The  sonar was lit up like the 4th of July all over Romero with a mix of shad and striper schools which we got better at differentiating.    Once we found them,  we stayed on them for a pretty good session at Romero but we left while we were catching fish for the BOP at 1:00. 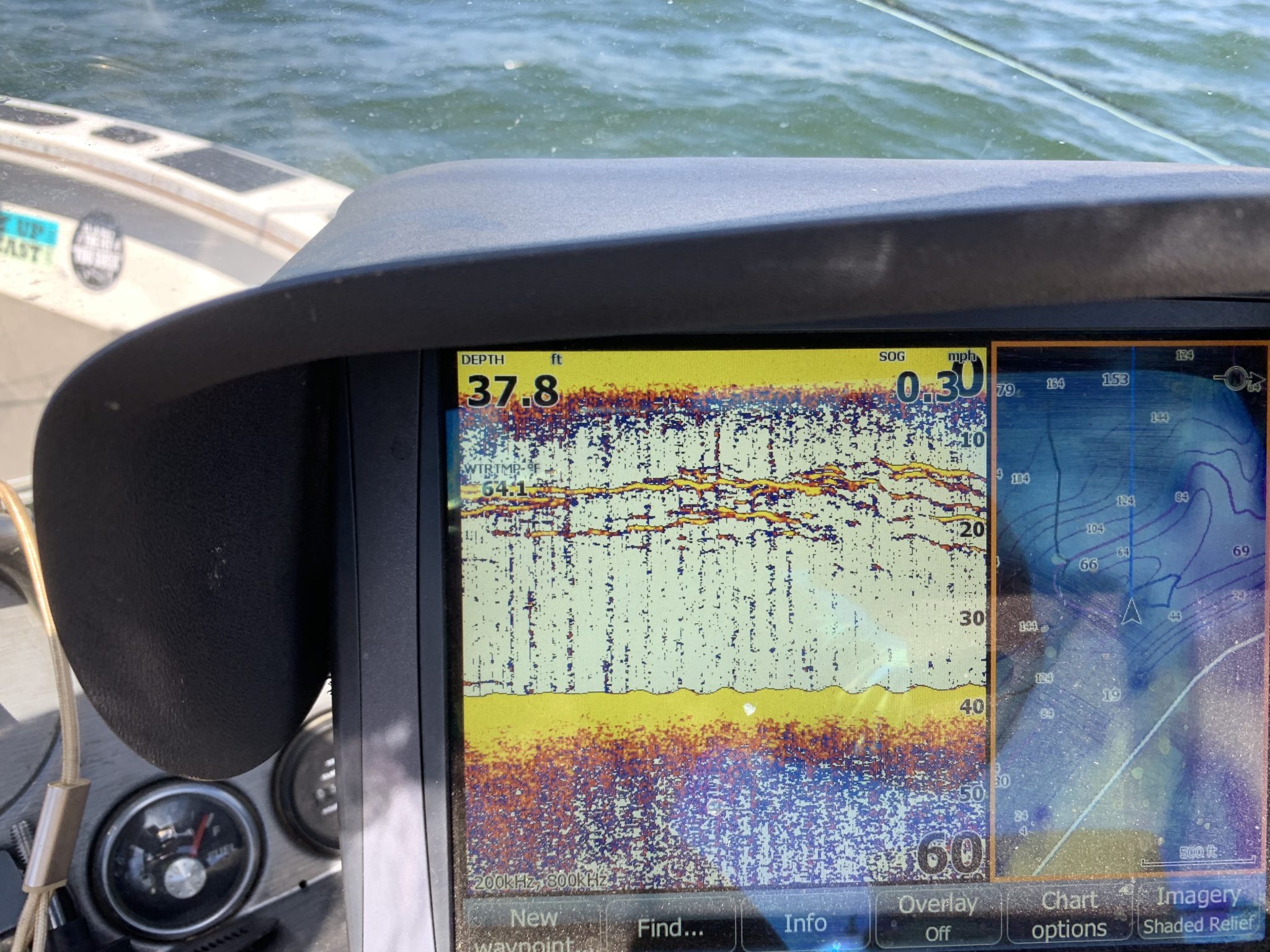 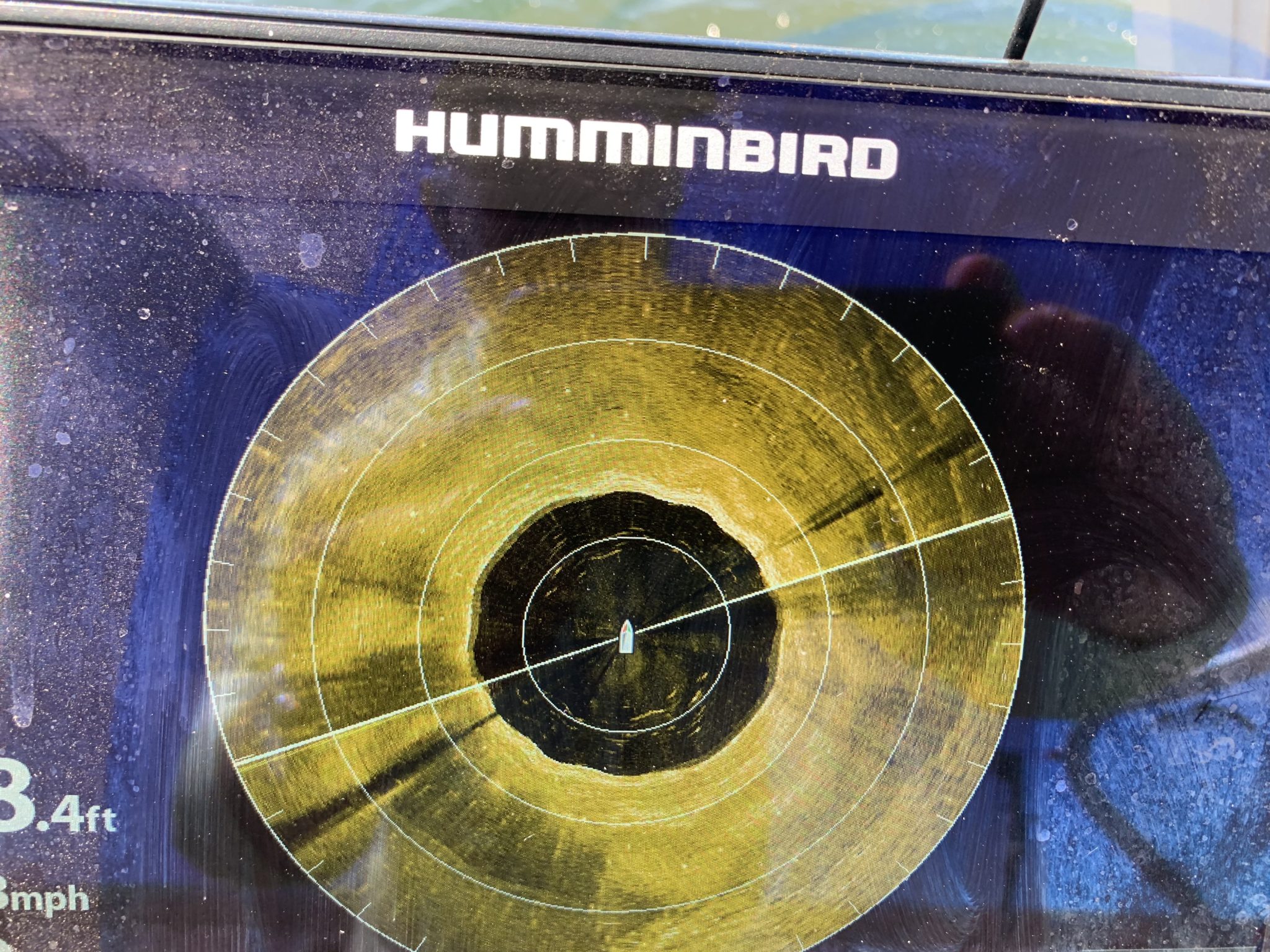 I wanted to fish the Dam  between Guardrail to the Bay of Pigs where Vaughn has caught all his big fish and I wanted to be in the prime spots between 1:00pm and 3:00 pm.    We systematically fished the 30-20 ft Holy Water in the afternoon with no luck hooking anything large.     Ironically,  its the same area where I hooked two large stripers within a weeks time a couple years ago.  The wind was building and it took alot to stay on the line fishing BOP.   My new theory is that big fish move in schools of like sized fish.   In fact its noticeable that the fish you catch in an area tend to be the same sizes during spawning behavior especially.    Several times when the wind died down,  I could see schools of liked sized stripers following a hooked fish to the boat.  Steve actually almost caught one next to my hooked fish today.   Again, I just didn’t hit the ideal conditions for BOP but those big ones I have a gut feeling are hungry, horny and eating in this moon phase,  weather pattern and water temperatures.    Len Bearden taught me years ago that there is much to learn from friends that catch big fish.   Sometimes you learn things just by looking for a pattern in conditions.   All San Luis Veterans know that it can be great one day and Zero the next.   It just wasn’t meant to be today.     And Vaughn sais it just luck.  I know better though.

On the Naming of the BAY of PIGS from Al Whitehurst.

Next morning, with calm conditions, one fish between us about 20 inches.

The number of big fish has dwindled, but it is still a great fishery.

The best day in history for Al was followed by a one dink day the very next day!   Real die hards on San Luis are always looking for a pattern.   There has got to be a pattern.  Just for kicks,  Ive posted the Solonar conditions for this last weeks banner and not so banner days.

April 17 -Vaughn get two large fish out of BOP

Nearly 50 percent of the big fish caught in this big fish season have died.    I remember how loosing these great fish was disheartening after my personal best died in my hands after hours of trying to revive it towing it around the lake.    Since then I occasionally try to figure out a better way to revive those big stripers and I built a “big striper resuscitator” out of some odd parts to try.   The rig consists of a two poles with a net sling and a small submersible water pump that I can plug into a 12 volt plug that is capable of pumping water through a fishes gills.   I used 1/2 inch plastic tubing with a one inch diameter foam ball that I can wedge into the fishes mouth to position the water flow to the gills without moving the boat.    The rig floats with added foam floats.  I clamp it to the boat with a 30lb boga so I can weigh it while putting it back in the water without holding it as much.    At least it another option to try.   Most if not all fly caught stripers dont suffer from barotrauma since they are caught in less than 30 feet of water.  The pain of loosing these big fish after catching them still haunts me . 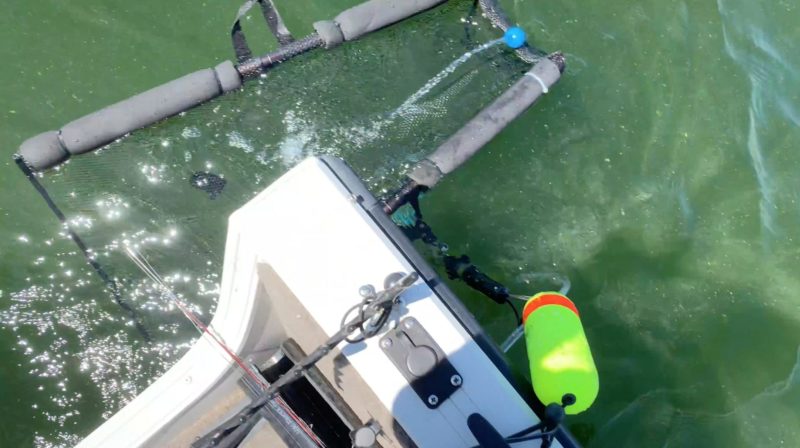 We caught  around 30 fish total today making a pretty good day but not hooking a 20 lbr really put a shadow on the day considering its probably the best time in 10 years to catch a big fish in San Luis.   It was a great day with Steph though.   He is a really great friend and Im not saying that because he keeps me in fresh pig sausage from his hunts every time I see him.