Friday May 5, 2019 -Steve Sakamaki and I fished the main lake today.  I told Steve that I would wait for a good day to take him out and luckily, we had a great day.   Ed Given was on the lake today and so was Vaughn and Wayman (the dynamic duo) who caught some monsters last week in a unprecedented 6 giant fish week    As tempted as I was to follow the hot sticks around  the lake , Steve and I concentrated on the areas where I knew Steve could make a good cast and had a good shot at numbers of fish.  Last time we went out  (Wacky Racky)  Steve did well on the long drop and strip near the trash racks.    The trash racks were money all day  today.   At times we would be both hooked up and catching fish on every cast.   When the school would moved around or out,  we would chase them successfully with the 360 sonar.

We moved to  the Cottonwood rock wall out of curiosity.   I told Steve about the Grate that feeds under the freeway.   Ive caught lots of good  fish there over the years.  When the lake is changing level,  there is always current at the grate.  Its smaller diameter means that their is almost always current there weeks after the pumps turn off at the racks.   The lake was glass when we made the run over.  As soon as we stopped, the sonar lit up like the 4th of July,   you could see the big schools of shad swimming the shoreline and also in the deeper water.    I cast a spinning rod with a shad dart at the school to see if they were eating with no takes.  I’m beginning to believe that schools of stripers sometimes swim with the shad or behind them,   We cast at the shad schools and hooked stripers on the tail ends of the schools more than once.  It is going to be a good shad year at the lake when they start to eat.   The Shad are huge!  Typically May is when the shad  really concentrate and move along the shoreline at Romero,  the BOP and Cottonwood.

The Sonars really worked well today keeping us on moving schools of fish.   The 360 was perfectly tuned to see what direction the schools were moving.  Plus,  I was casting backhand all day to keep Steve from casting over the boat and whenever I saw a school on 360 sonar  coming in from the other side of the boat,   I would cast and hook fish consistently when no fish were showing on the down sonar.  Also ,   I set the maximum depth of the fish finders to 40 feet.  When they are set on AUTO and you  are in 250 feet of water,  its very difficult to see fish in the top 30 feet on the screen,  By setting the range depth to 40,  you only see fish you can catch and they are much easier to see in the bright sun with higher resolution.    You miss alot when you are set on AUTO range in deep water.

On one run across the lake when it was glassy still,  I noticed a big swirl in the water  as we were going 30 mph.  I swung the boat around to go look with the sonar and we were over a  big school of fish that didn’t look like shad.   The schools of Shad look unreal on the down sonar – like a big glob of redworms 20-30 feet thick.   The smaller schools look like bigger fish (longer worms) and have less numbers of fish in them.  I think it might be time to test the underwater drone to see if I can get more data.

While running ,  I caught a glimpse of what looked like a giant  swirl  made by a big fish.  It was  bigger than a shad and my first thought was that it was a sunning carp.    I stopped, the sonar showed fish less than 20 feet.  We made some casts and we hooked a 20 inch striper in the middle of the lake.   The water temps were different all over the lake,   The middle of the lake was 57 degrees,   BOP was 62,  the Racks were 59 and cottonwood was 58.

I saw lots of good friends on the lake today.   Ed Given was out alone in his Whaler which means the lake must be getting better.   Vaughn and Wayman were out looking for their 7th lunker of the month.   Whenever Vaughn is on the water,  I try to step up my game.   He is on top of the leader board this year with a score that will be very hard to beat.    We didn’t catch any big fish today,  but I feel like we were putting flies in front of them.   Perfect conditions today it seemed.  For awhile the lake turned to glass,  by the time we left around 4:00,  there were 2 foot rollers, whitecaps and the yellow lights went on.  That is a pretty fast change of conditions. 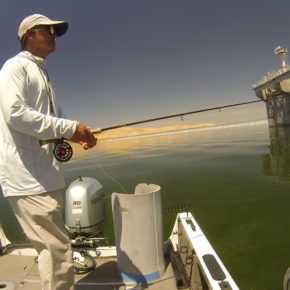 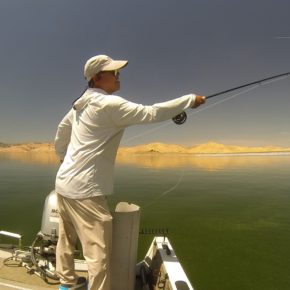 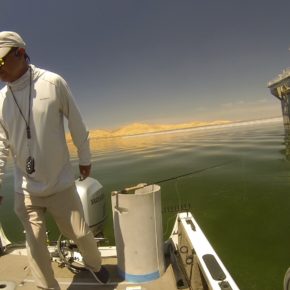 One thought on “Banzai at the Lake with Steve Sakamaki”