Friday March 20 2020 Day 4 of the Pandemic in California – I took my wife fishing on San Luis for the very first time. It was one of the most memorable fishing days of my life for many reason least of which was catching fish.   On day 4 of the California Shelter in Place Coronavirus Pandemic and two days after all the State Campgrounds were shut down indefinitely,  I received word from fellow San Luis fishing die hards that the state was keeping the boat launches functioning as long as possible.   My thoughts were if the state was keeping them open despite closing the campgrounds,  and as long as we practiced  social distancing, it would be ok to spend a day of our isolation on the lake.    The last three days have been spent  dealing with unprecedented office emergencies, Russian Style grocery lines, and constant texting to our nervous  family, staff, colleagues and friends.  The constant  listening to podcasts and webinars, TV news and  reading emergency  emails to medical professional was getting to us.  I suggested to Gina that we could still do all this from the boat on the lake and catch dinner while socially distancing– the internet access is great on the lake.

I put a comfy lounge chair on the bow for Gina to work and loaded the boat with snacks, drinks,  hand sanitizer, gloves, and a precious roll of toilet paper to use (or needed to buy gas).  I had tied a couple dozen new flies while in isolation to try out  and I bought some new lines to play with (pre Coronavirus)  – A 9wgt Density Compensated Outbound Short shooting head (ST96 at 375 grains vs 28 feet of t14 at 390g)   and a New line by Rio called a Fathom line in a type 7 eight wgt.  I thought about wearing a mask while fishing instead of a buff but that would be just for show and wouldn’t do anything.  The Coronavirus is a one micron virus,  a N95 is 3 microns, and a Buff is not a filter.  The way you test a N95 mask  is to spray a saccharin solution  at it while it is on and if you can taste the sugar you are  “Corona naked”.   I brought a few standard (Corona useless) masks anyways.  The old masks are useful if you are sick at home and dont want to spray your house down everytime you cough or sneeze.  Also they help to remind yourself not to touch your face and are helpful  keeping  the fish guts out of your face while cleaning them.

The rains have come back this March and in the last 4 days, it’s been hard to pick a winner weather day based on long range forecasts.  The last time I went out a week ago.  the cold weather that left snow on the foothills really slowed down the shallow water bite on the lake.   The day of the Lockdown,  there were reports from the lake that the downrigger fishermen were doing well trolling deep but the flyfishing had slowed down.  I have  been receiving updates from my “Fishbrain” app that San Luis and the Forebay are being fished every day of the crisis.  The Fishbrain phone app has now become my main source of what is open and what is closed.   It is a realtime app where fishermen report their catches—basically a brag app.  Before leaving,  I called the lake to confirm that they were  open (the Basalk Kiosk ((209 )827-6846) .    They  Lake was open  and we left the house at 7:30 to cloudy skies and a chance of rain.

There was very light traffic going to the lake.  As I passed Callero Reservoir I  noticed a boater at the closed gate.  I had thought they would keep the ONLY boating reservoir in Santa Clara Reservoir open. Callero is SC County and the official post on there web site is that county trails and parks will remain open for  “Walkers” (not the Walking Dead type).   On 152 we were passed by several Highway Patrol cars.  Making eye contact with one,  he smiled and waved.  I was a little fearful of being ticked for daring to have some fun during Shelter in Place but then I thought I’m actually being more isolated on the lake.  I thought about what I would say about pulling a boat if for some reason I got pulled over.     I took an informal poll of my fishing buddies before leaving and the consensus was “launch”.  They were probably testing the water as they waited to called to post bail if I was arrested.    I figured the closest person I would probably contact was the Kiosk Person letting us in.   As we approached the Basalt launch, a huge herd of Tule Elk were grazing on the fields below the Dam unaware that the world had changed.     We were the only car as we reached the Kiosk and the ranger didn’t open the window and either did I.   I flashed him my Poppy Pass  and he nodded   As he debanded my boat,   I stuck my head out the window and asked him about the future and he confirmed that they are trying to keep the launches open.   I arrived at the launch and a dozen trailers were already parked and not a person was around us launching.   People must have launched early probably thinking that any day or hour now they will close the launches for an undetermined time —  the last fishing before the zombie apocalypse.    The water was flat and windless,  the broken sunlight was spectacular,  and a female bald eagle circled above us as we launched,      As we settled down in the boat,  I could see half a dozen boats at the racks  fishing pretty close in.     We ran straight there, all the time Gina texting our kids and office staff.  When we got there,  I could see a truck parked on the Dam and the boats were pulling out.   All the boats we saw around the racks were trollers and some were hooked up, so I decided to avoid the circus and socially distance myself to the run from Daves rock to Guardrail till the Dam Monitors left.

Within 30 minutes of fishing,  I picked up two fish right off the rocks but then it slowed way down with no bites despite seeing them on the Livescope.    The water temp wa 52 degrees and the air temp was in the mid 50’s.   Gina was sipping hot tea to keep warm and chatting and texting away from her throne on the bow.   It’s amazing how much you can multi task while fly casting – like watching movies on a treadmill.     I had her check the racks with my Fujinon Binoculars as I fished to see when the boats moved in .   We made a run to the racks at 11:00.   They put new keep out signs attached to the cables and I realized at that moment why those cables were there to begin with.  I think they said 50 feet away in small print.   I fished all around the racks with no luck and I didn’t see any schools around them like last weeks bonanza.   The trollers on the other hand were constantly hooking up.   Everyone was pretty friendly on the lake,  keeping their distance and smiling and waving as if we all knew this might be the last day of fishing the lake in a boat for a long long time.   The best trollers were fishing broken back Rapalas  (blue and white) at 60 feet.   There were some HUGE schools of fish deep  about 40-80 feet off the front of the racks all moving pretty fast–to fast to lead with a sinking fly.      It was a matter of luck getting your lure or fly across them but when I did , you would get hit.  By about 2:00 pm ,   I figured out how to get them.   I put the Fathom line all the way out (90 feet) till it went straight down,   then I raised the speed of the trolling motor till the line angle maintained at 35 degrees which was about 2 on the motor..  Then I jigged the fly and hoped a school would cross paths.  Not really traditional fly fishing, but I picked up two more that way and decided to actually try out a downrigger and troll an umbrella rig for the rest of the day.

Trolling a downrigger is not as easy as I had thought.   Not all the trollers do equally well with similar equipment and depth.    It’s actually a science.   I first tried to troll the umbrella rig that I bought from the famous Meng Xiong.  The Atlas rig is designed and manufactured by him specifically for SL stripers.  I put it on my beefiest swimbait rod with 80lb braid and just couldn’t keep the huge rig from pulling out of the downrigger clip at 4mph.    I never took a run with it out.   I switched to a smaller lure  with less pull on the clip and even though I trolled for several passes through schools,  I never got bit.    I then switched out to smaller lures and still didn’t get bit.   I need to learn more about downrigger trolling–certainly have plenty of time.

We left the lake around 5pm  as we were only one of 4 boats on the entire lake by then.   Maybe something happened and everyone left I thought.   Turns out we could have stayed out till 6:30pm with the kiosk closing at 7:00pm.  I took home a pair of 20 inch stripers to clean and we ate one of them Asian Poached Style for dinner.  It was beautiful day despite the  chilly weather  and so much fun talking, texting, eating with Gina on the boat.    She sees now why fishing the lake is part of my mental stability regiment. Gina will be fishing with me a lot more in the future – she just loved it.   We both slept great being outdoors all day and I felt comfortable knowing we were doing our part to minimize our exposure to others while taking care of the mental stress that we have been going through.   It is important to stay grounded and minimize anxiety as much as possible these next week and months.  I thank god that fishing is something I can do that still maintains social distancing protocols, is safe to the public and ourselves, cheap, a source of protein,  and accessible for the time being.  Honestly,  if I retire and its anything like this,  I want to work a couple days till I die.  I’m trying my best to maintain a routine.

I have to admit I had to convince myself  that I wasn’t risking the public or ourselves as high risk senior patients.   I heard that the day campgrounds were closed at Half Moon Bay,  the beaches south to Pescadero were locked up even though they announced and posted  that trails and beaches would remain open . According to Mark Won,  Surf Fishermen on the beaches were being cited by SMC Sheriffs.    Everywhere else there was no issues.  On the news I heard that the State of Maine and Michigan is encouraging fishing as an outdoor social distancing activity waiving fishing lic requirements during the crisis.   Hopefully the governor will not punish fishermen who follow the social distancing protocols  (not like spring breakers in Florida).  The phone number to the Basalt Launch is (209 )827-6846

Finally,  even Gavin Newsom insists that he will not close the parks and open spaces and to use common sense and social distance, have fun, and do your part to flatten the curve.

Addendum:  March 30  – The State of California closes San Luis Boat Ramps till April 30 (or longer).  A few beach partiers have ruined it for the rest of us because they are not practicing social distancing. 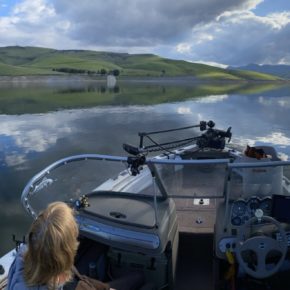 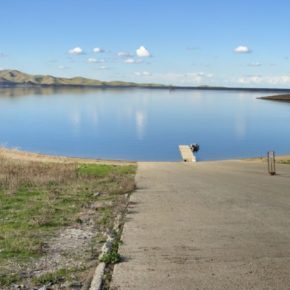 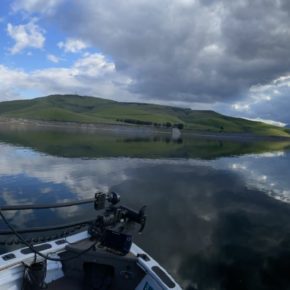 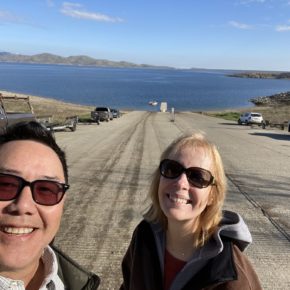 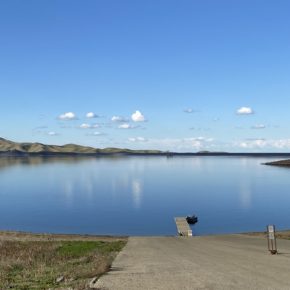 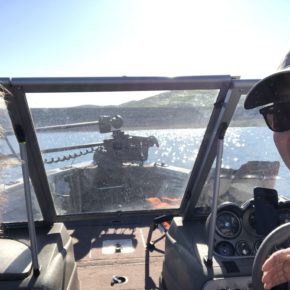 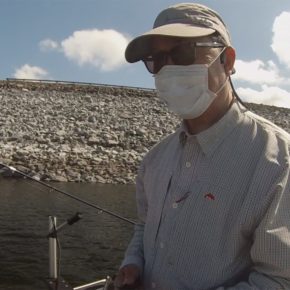 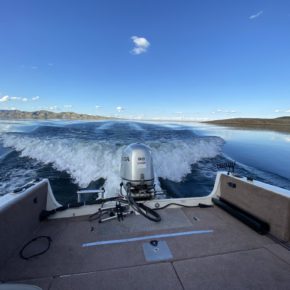 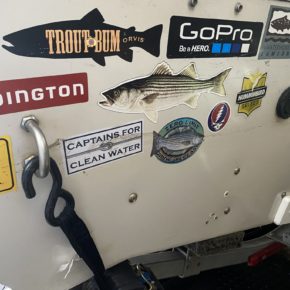 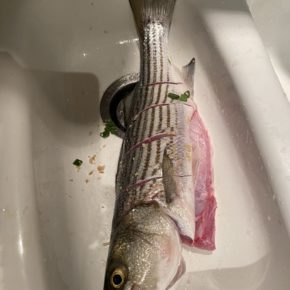 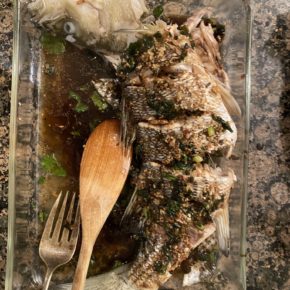 One thought on “Fish like its the end of the world….But be safe and keep others safe.”

A Big one from the lake a couple years ago. #covid