Sunday June 14, 2020 –  These last two week back to work at the office have seemed unusually long despite seeing about half our normal patient load.   There is so much more preparation and post op sterilization  for the same number of patients making if feel like twice as much work for the same amount of Dentistry.   I’m confident that this will eventually feel like the new normal for there is only so much we can do in an 8 hour work day while keeping everyone safe.    These last weeks have been especially difficult hearing about all the great days on the lake that I couldn’t fish because of work or wind.  I forget that most people are not back to work and that we are still under a shelter in place order.  Most of the regulars have been out on the lake on every windless day.   Dan Blanton caught a 40 lb personal best Striper on the lake this last week.  I was amazed that after as many years as Dan has fished the lake, it still had  something unique to offer him.   I’ve known many hardcore San Luis Fly Fishermen who have stopped fishing the lake after many years because of the perception that the lake has degraded and has nothing new to offer.

Today’s fishing felt much like the office- more work for less fish.   The weather has cooled down over the last two weeks and the winds have been relentless.   I was very lucky today with the weather and  wind.   The winds were light all day long despite predictions of escalating winds by noon.  The trash racks were again crowded.  Half flyfishermen and half bait fishermen surrounded the racks.  The stripers were deeper today with a full 1 minute count to get down to the eating fish.  Baitfishermen are still hammering the striper population.  Unfortunately , with deep bait caught stripers, every fish they release  will likely suffer from barotrauma.

Large schools of American Shad were racing around the racks like Nascar.  The Shad in the lake seem to gravitate to the walls of the trashracks this time of year and with the Livescope I watched them swim around the racks in a circle for hours all day long.   I’m thinking that next time Ill bring shad setup with an indicator to place on the wall.  It would be fun to catch those shad on flies consistently.

The stripers were not jumping on the fly as fiercely as they were last week.  Fast long sharp strips seemed to get the fish into the mood.    Plus stripping like you are setting minimizes missed strikes on day like today.   I snagged several fish today in the head.  Wimpy Stripping in my opinion, loses opportunities.  I think the fish may be drawn to the fast moving flies even if they aren’t hitting them.   The fish  are in spawning mode and I am almost certain that  many of them succesfully spawned with the wind currents these last weeks.

I caught ten fish today because I refused to leave at 2:00 with most everyone else.   It took me two hours to catch three more fish to catch up with Steph and Vaughn who were all in double digits by noon. 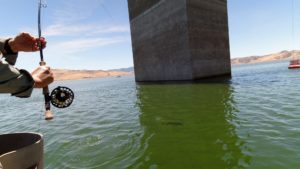 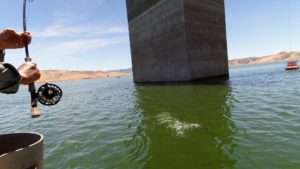 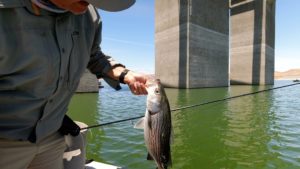 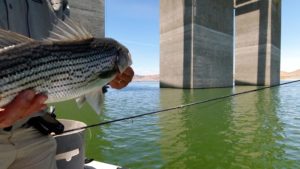 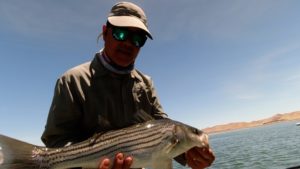