Monday June 29,2020  It’s been two weeks since I fished the lake.   It seems that its only calm on the three days I work a week and the wind prediction (windfinder) has been unreliable lately.   A couple friends have take the drive to the lake not believing the Wind Line and ended up turning around.   The Forebay has been putting out lots of smaller fish and I was prepared to bring a 5 weight to O’neill Forebay if the lake was closed.    A 20 Mph North east wind sometimes leaves the Forebay fishable since the Dam and Foothills block those wind directions on the Forebay.   Windfinder predicted calm conditions from 6am to 2pm but when I woke at 6:00 to check, the winds were blowing 18 mph.   I woke up on the hour to check and It started to lull around 9:30.  I called the Basalt Kiosk for conditions at 10:30 and they told me they had just turned off the red light.  I headed for the lake anticipating a great afternoon of fishing.

There were half a dozen boats out who like me were watching the winds all morning for a shot at a couple hours of fishing.   I headed to the racks which seems to be the main event these last months and pulled up on Tim and his girl friend.  Tim camped at the launch at 6am and waited.  By the time I pulled up to the racks at noon,  Tim confessed  that  she had caught 5 and he had caught zero.  She was an excellent flyfisherwoman.    The conditions looked really good and Tim was about to head elsewhere to fish which was a bad sign.  Tim never leaves fish.     The heat was building and the wind layed down and the lake became glass.   The East hills were blackened by a huge fire that looked like it started around the windmills.   I burned all the way down to the waterline and was still smoking in areas.  It must have been quiet a site from the water when it was going off.  It had to have been only a day or to old.

I started out systematically fishing two rods fore and aft.  When the fish are between 25 and 40 feet deep.   I find fishing two rods sure beats counting to 45 .  It takes about a minute between casts so I find myself stripping more and waiting less especially when it is slow.  Fishing two rods  is sometimes a good way to hunt for fish.    Two rods are a disadvantage when the fish are 20 feet and above however unless you fish slow sinking lines.    Sometimes I use two different flies or different lines with different sinking rates.  When fishing gets better,  I will stop using two rods and concentrate of fishing the drop.    In the first three hours,  I landed 8 fish and in the last two hours and didn’t get a hit.  The fish were all over 20 inches,  the largest one 22 inches.  All healthy hard fighting fish ,  a couple bucks were still spawning and I saw a few pairs of fish around my hooked fish to the boat – a sign that a few fish  are still spawning but the main event is over .  It was definitely slower than previous weeks but I was just glad to get out and fish .   I could see fish  up close to the rack and pilings.   I watched a couple jig fisherman catching fish right on the wall straight down vertical jigging.     I think stripers sonetimes hug the walls of the pilings to hunt baitfish.   I always try a couple cast right against and parallel to the cement and have caught many stripers like that over the years.   It was a great day considering we are still in a lockdown and preparing for a second wave of infections.  I  think we will have a vaccine within a year and I also think that treating and preventing serious Covid-19 patients is getting better and there will be less fatalities in the ICU from here on out.

Our Cuba Trip has been cancelled for next month but our September Alaska trip is still on and I just purchased air tickets.  We may need to get tested before going however if we want to avoid quaretines. Also Mark and Phoebe just cancelled their plans to get married this year in August.  I hope next year will be enough time to get back to normal if that’s even possible.  It’s not going to be the event they wished for if people are afraid to die from attending. 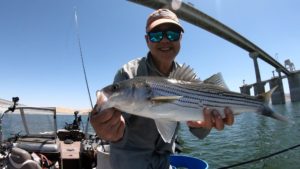